Sam Bailey is a talented illustrator and designer who runs the clothing brand The Bronze Trade, the blog of which I highly recommend checking out—especially for the tales of Sam, Chaz (who shot the pictures below), and their friends in bands touring Europe’s dive bars and generally giving them what for.

This year, he designed UK brand Drop Dead’s Summer collection to great effect. Drop Dead, for those living under a rock, is the clothing brain child of behemoth UK metal band, Bring Me the Horizon. This is a band who recently made the unimaginable transition from being one of the most hated groups in the country, to getting daytime UK radio play and selling out Wembley TWICE, without really having to compromise on anything—which is quite incredible considering how alienating most of their music is.

Off the back of that, I decided it was high time that I caught up with him for The Hundreds so we could all find out a little bit more about Sam Bailey. 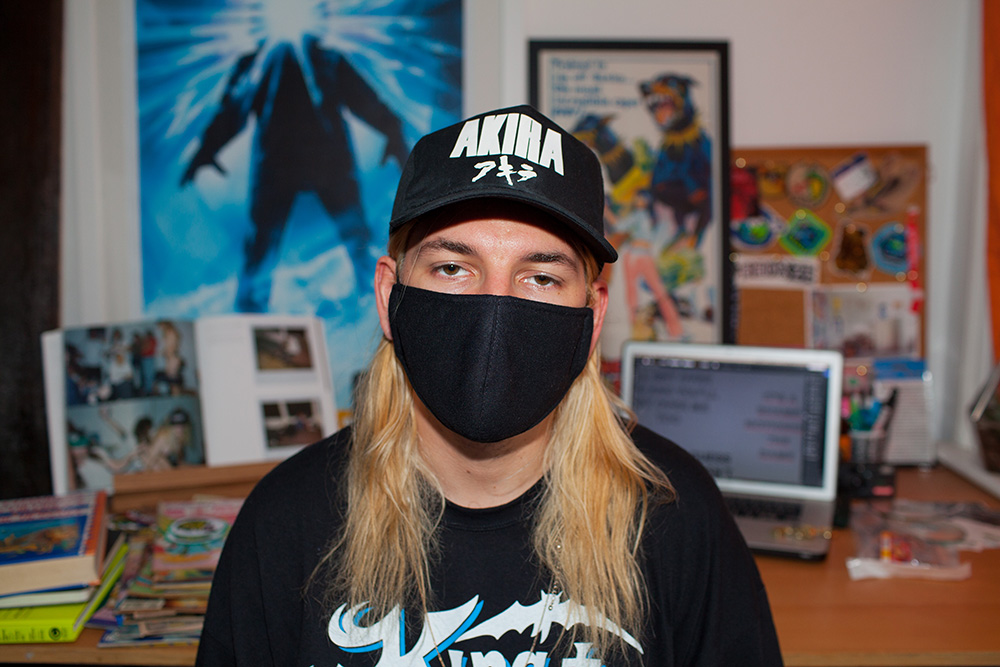 So Sam, who are you and what do you do?
I’m a designer based in South London. I quit my job late last year to go freelance full-time and I haven’t looked back.

Was The Bronze Trade your first foray into designing clothes?
I initially started designing merch for friends’ bands, my name then got around word-of-mouth style. In 2010, my friend Tailby approached me to design a line of tees with him and we’ve been dropping bits and pieces ever since, with our first cut and sew stuff, which came out this April. 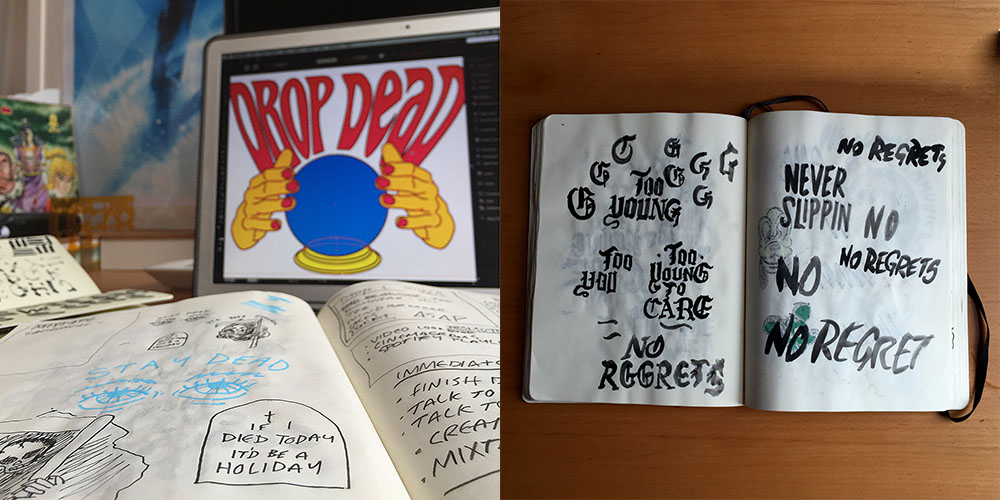 How do you like to design—sketch first or straight to computer?
I tend to sketch out a bunch of small self-contained ideas, and then I’ll move to Illustrator. I’m rarely confident enough to use something close to what I start with, [so] most of my stuff really comes together once it’s in the computer.

How did you first link up with Drop Dead?
I’d crossed paths with Oli a few times over the years, and I’d been on the radar of Ben Normanton, who is head of design over there. I’d lost my job out of the blue early last year, so I started posting graphics on Instagram. Initially, Ben had mentioned he had been vibing my stuff, and then after a little while Oli hit me up and asked if I’d be interested in contributing to their Summer [2015] range. 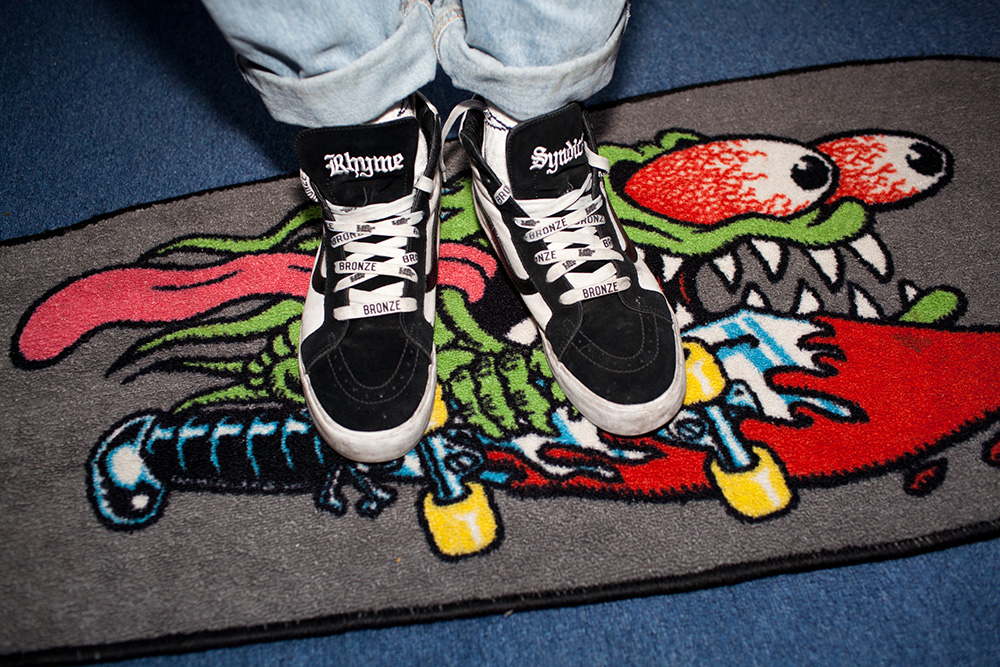 For those that aren’t aware, who and what are Drop Dead?
Drop Dead is a clothing line started by Oli Sykes who is the the singer in Bring Me The Horizon. As the band grew, so did his brand alongside it; now they have a shop on Carnaby Street and bring out a big range for every season.

What’s your inspirational process?
I keep a Notes page on my phone that is filled with turns of phrase, wordplay, quotes from films, things I’ve heard, or anything that sounds cool. Anything I can create a visual idea out of really.

The thing I enjoy most is the process of thinking of how I can link up a visual image with words in a way that takes something familiar and puts a spin on it. I think the best work is anything that makes you feel like you got an in-joke. 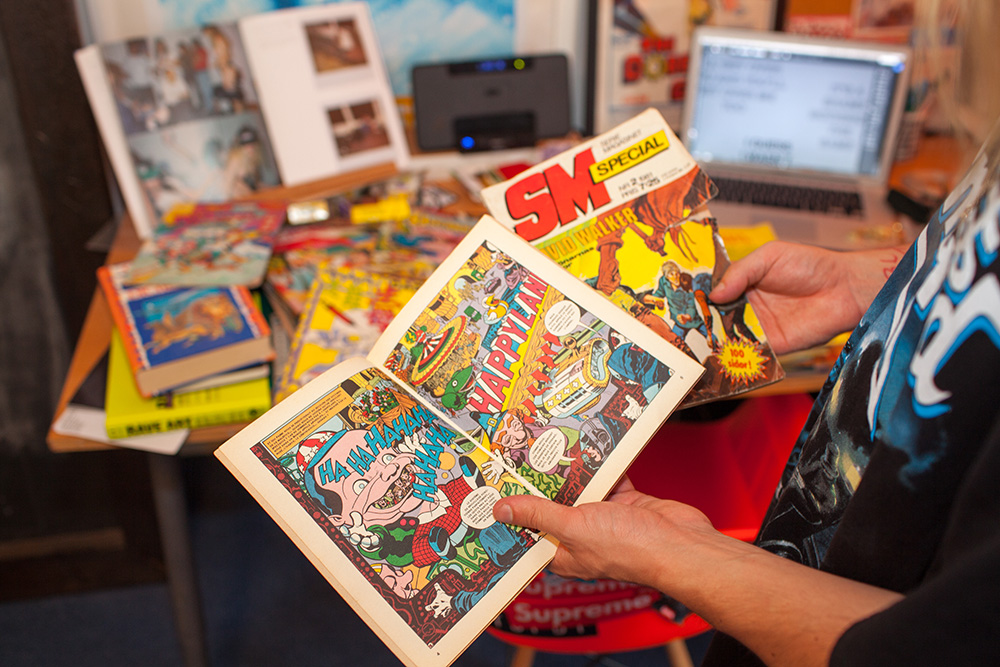 Talk us through this Drop Dead collection. What are some of your favourite bits?
I really got a kick out of seeing the pieces I designed put through different processes, like knitted, embroidered, put onto patches. I like how the “It’s Your Funeral” and “God Regrets You” designs came out. 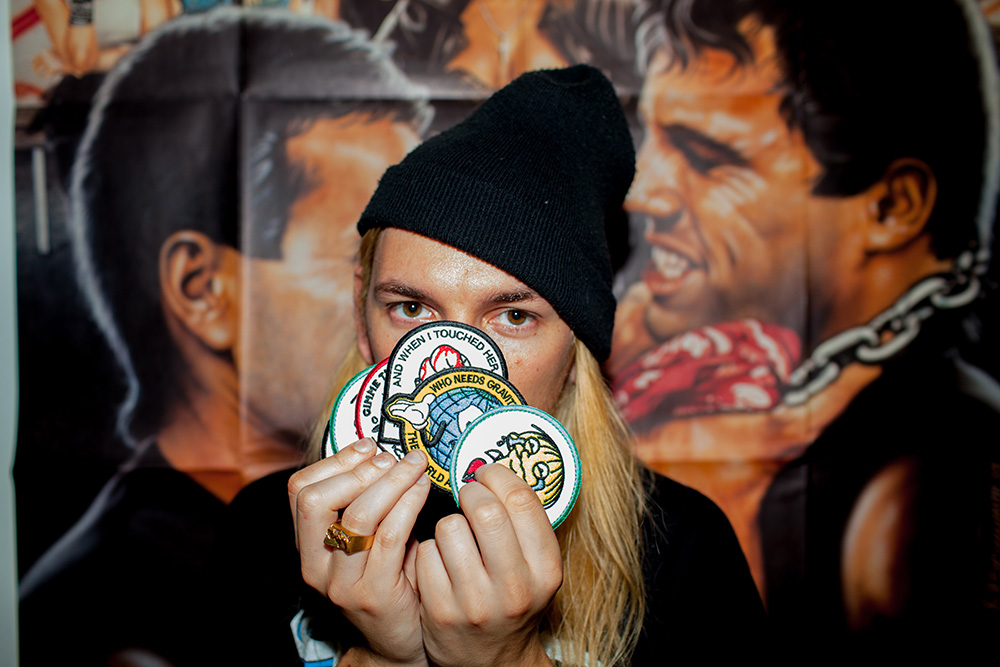 How much creative control do you get over the process of creating the collection?
I send over a bunch of ideas and designs then they pick and choose what works for them. It’s a best case scenario for me as I get to design with no particular brief other than to do my thing, and they’ll choose what they like and move forward with it—so I don’t really know what’s getting used where until it’s out. Ben and others are heavily involved in coming up with designs too. 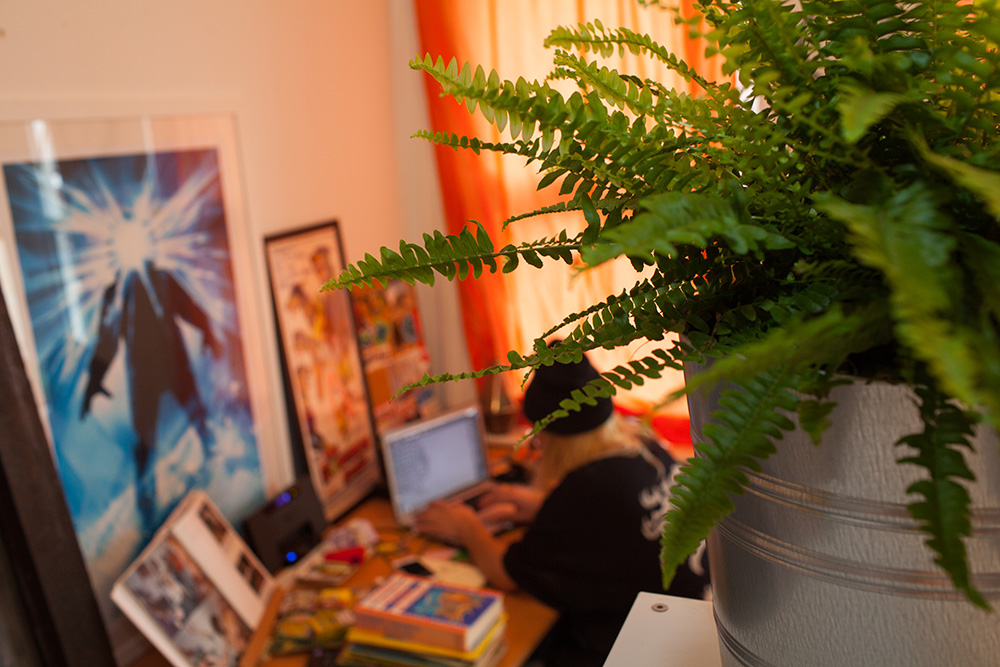 How do you separate designing for the Bronze Trade and Drop Dead?
Bronze Trade is becoming a lot less to do with product now and more with documenting our lifestyle in blog form. My personal design work I just do for the sake of having a creative outlet and I just post that on Instagram really… The different between that and work for DD is I’ll take their audience and mood into account. My personal stuff tends to be more obscure. 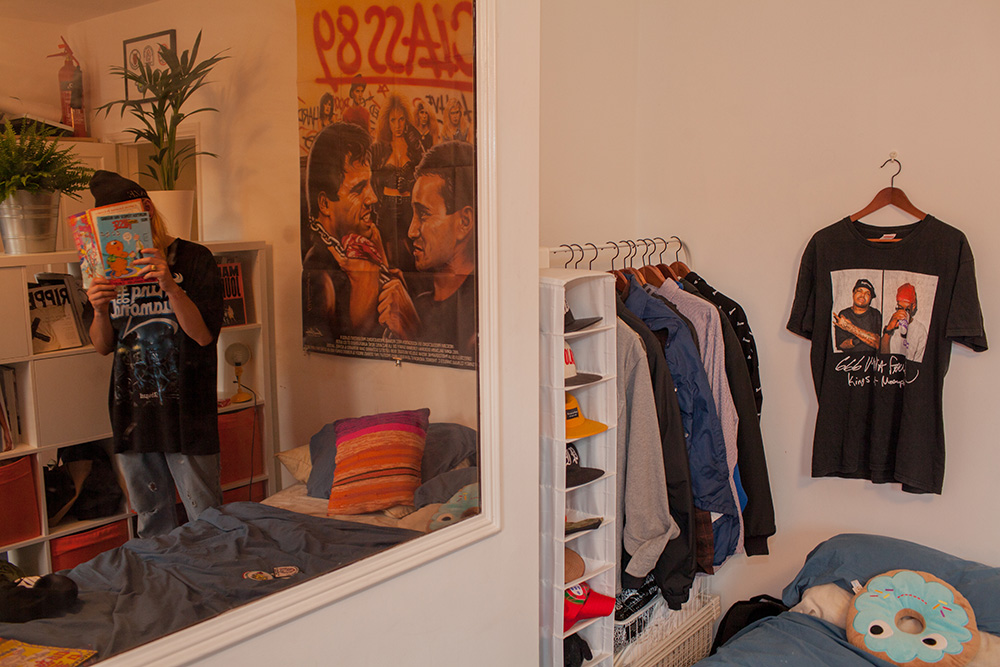 Where do you work?
Sent from my iPhone.

Where do you like to go in London for inspiration?
I hit a couple places on the regular. It’s very easy to be sucked into a particular movement or graphic trend, so I tend to try and avoid the Internet. The antique bookshops on Charing Cross Road are amazing. They have second hand sections in the basements—I find a whole bunch of stuff in there. Also Deptford Market, which is on a couple times a week, has a junk section you can dig around for weird shit. 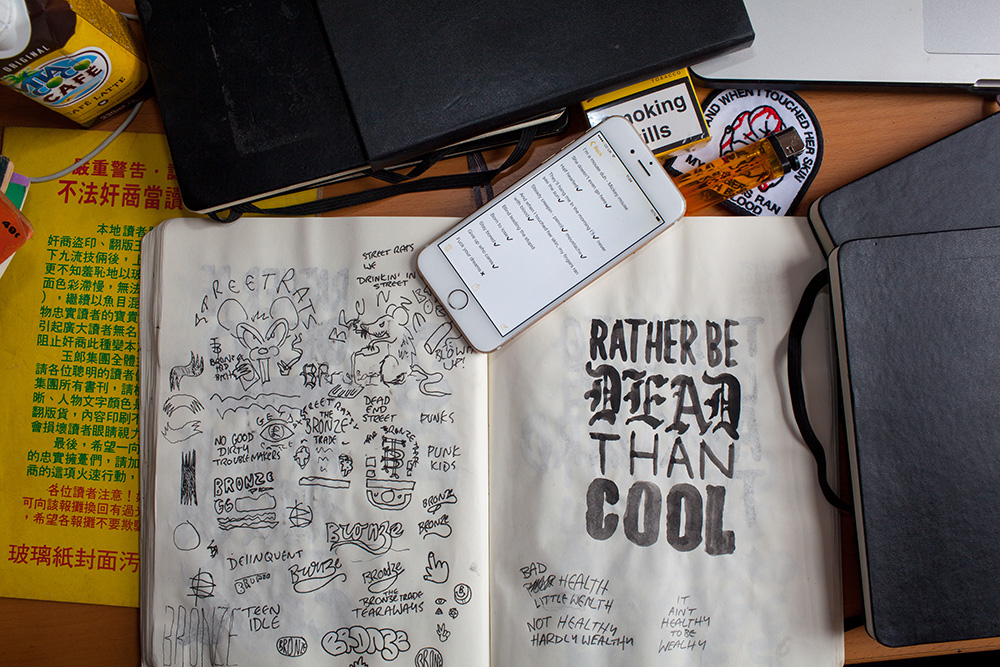 “I KEEP A NOTES PAGE ON MY PHONE THAT IS FILLED WITH TURNS OF PHRASE, WORDPLAY, QUOTES FROM FILMS, THINGS I’VE HEARD, OR ANYTHING THAT SOUNDS COOL.”

What’s next for you?
I’m planning to make some more patches and other things to put up on a webstore, and then I’d like to put on a show before the year is out with a book or zine alongside it. In the mean time, catch me on Instagram, the bronze trade blog, and my webstore at bamsailey.com. 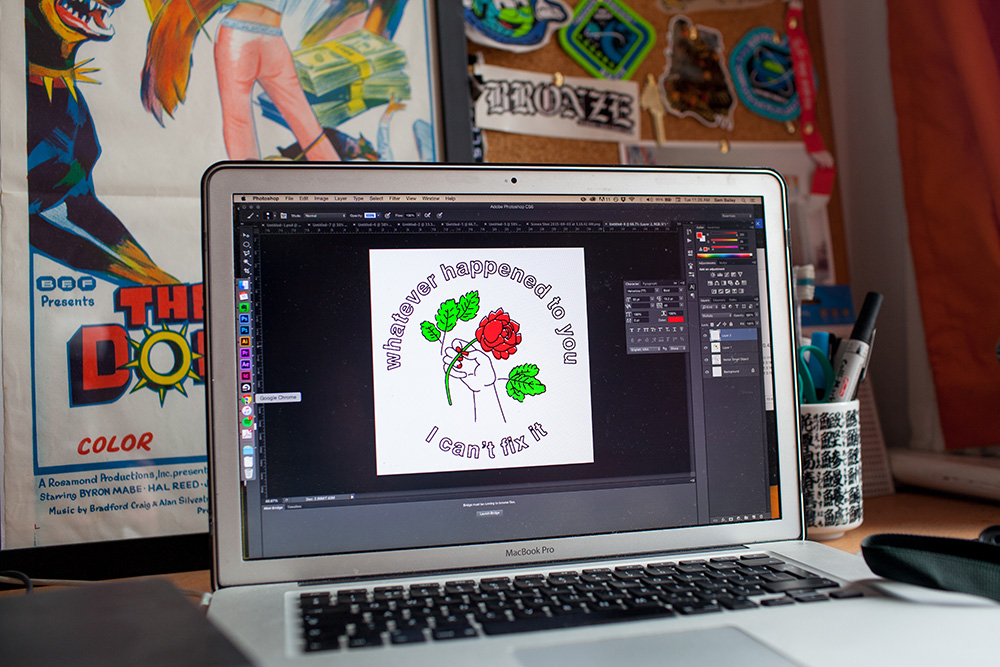 Tasos Gaintatzis & Marina Legaki
Tasos and Marina meet up with the modern Renaissance Man, Mike Mills, to see how he's reaching out to people through his art and successful feature films.