Zig-zag patterns, optical illusions, and fractured spaces are just a few of the familiar forms in Ryan Travis Christian’s visual vocabulary. But for his current show “Check Please!” at Western Exhibitions in Chicago, the artist has introduced new elements such as chevrons, spirals and lightning bolts. He has also added color to the black-and-white graphite drawings he is most known for.

“The work in this exhibition is a bit more experimental for me,” RTC explains. “I have been at the monochrome thing for a long time now. I don’t want to be totally pigeonholed, so I’m mixing it up a little bit. I’ll always make the ‘classic’ RTC images, but I feel a great need to screw around in the studio right now. Color is only part of that equation. There’s also painting, sculpture, music—It’s time to diversify!”

There are 17 new works featured in this exhibition, which includes two sculptures, plus an outdoor mural RTC painted with friends such as Cody Hudson and Jose Lerma. “I’m still not sure being an artist is a viable career for me,” RTC says, “but I am honored people have taken me as serious as they have thus far and given me so many great opportunities. Regardless of whatever happens though, I will always make things. It’s a natural inclination for me.” “Check Please!” is on view through June 6. 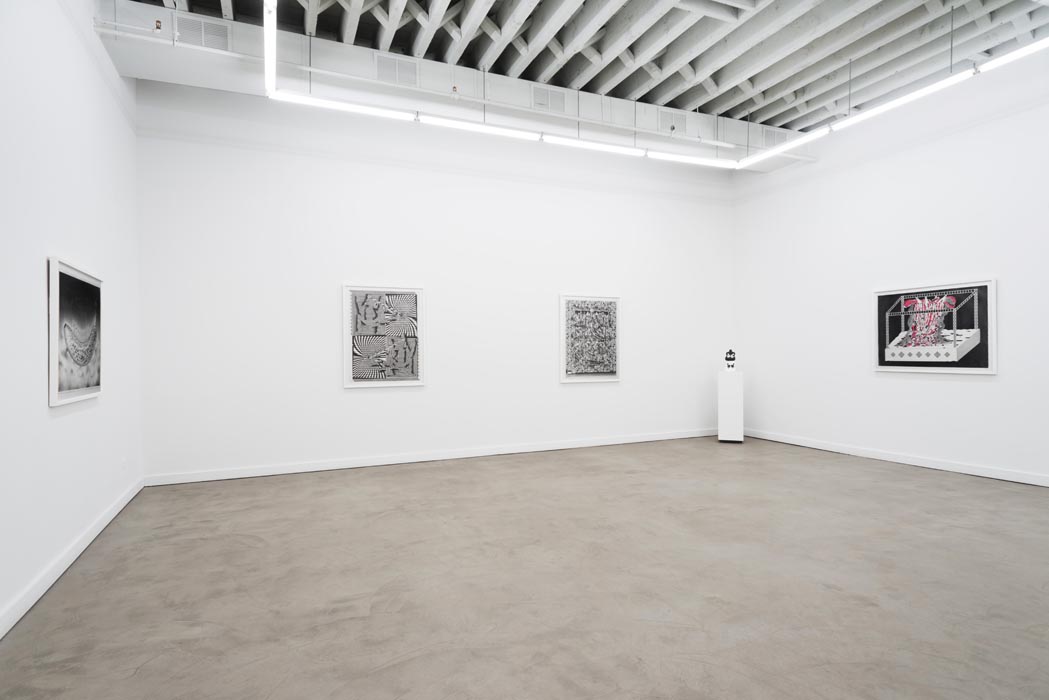 How did you develop your aesthetic? Did you go to art school or were you self-taught?
I’ve always drawn things my entire life. I went to school for painting, deep out in the vast cornfields of Illinois. I used to make a lot of really derivative stuff there, I was very into early 2000 Richard Heller Gallery artists and aping a lot of it. The work I make now, that you are familiar with, didn’t really start happening until 2008 or so, shortly after I graduated. The first piece of this nature was called “This House Was Built For Blappin’ In” and at the time, it seemed to come out of nowhere to me. Since then, I’ve been able to mostly pinpoint where a lot of the early decisions and content came from, mostly.

Who or what are you most influenced by? How much of an influence did/does Chicago have on your work?
Like anyone else, I’m influenced by the people I surround myself with (for better or worse)—my friends, my family, art, music, films, nature, food, everything, man. I can’t literally list specific things, there’s far too much.

How influenced were you/are you by cartoons? Which ones in particular?
I fucking love cartoons, they are very important to me. I love the no rules/physics-defying dynamics of a lot of old cartoons; the absurdity. What’s not to love? Scooby Doo, old Disney and Looney Toons, Spider Man and Friends, Snafu, Flip the Frog, Problem Solverz, ATHF, The Simpsons, Futurama—there are too many to name, I could go on forever.

Can you describe your process?
I generally am not quite sure what I want to achieve until I’m at least halfway into it. I almost never ever sketch. A lot of the work is based of off an anecdote or an amusing phrase or ridiculous concept. Some of it is straight-up stolen. It varies from piece to piece really, There are a few different approaches I take: A: I’ll make a mess on the paper with a dirty cotton ball then erase into it. I use the mark making as something to respond to until I build an image up that way. This is the most abstract approach. It is gestural at its beginning and gets tightened up. B: I’ll make a grid or a pattern and then start to develop an image geometrically. In fact, this is a bit of the opposite to approach A, as it begins tight and then gets loosened up as I go along. After I have created a contract of sharp shapes and patterns, I’ll respond to it with figuration, curves, smokiness and whatever else is in my arsenal at the moment. This is more structured. C: The rarest of the three. I take a source image, I draw it and manipulate it. There are, of course, exceptions to all of this, I don’t know, after typing this, I realize I really don’t pay attention to what I’m doing in the studio, I just do it and think about it in retrospect.

What interests you in working with graphite?
It’s cheap! Super versatile. Direct. No mixing, no mediums, no drying time, no getting shit on your clothes. As a youth, I preferred using the old number 2 pencil over everything, and I still do.

Your work often features geometric patterns and illusions. Where does this come from?
I think being a child of the 1980s certainly jumpstarted my love of buzzing patterns. Old video games and all that. But, pattern is everywhere; the human eye/brain is drawn to pattern naturally. You see it literally everywhere all the time—clothing and fabrics, signage, architecture, nature, etc. Pattern is literally awesome. I figure, why not employ that as a tool? I think it compliments my figurations and organic content quite nicely.

Can you tell me about your current exhibition at Western Exhibitions. What can people expect to see from you in this show? How is this show similar or different from your previous show at the gallery?
The show is called “Check Please!” There are 17 new works, nine larger-scale works in the main gallery, eight smaller-scale works in the project space, and a small sculpture in each. The work in the main space is my signature style, while the work in the project space is a bit more experimental for me—color, text, collage. My last show, “River Rats,” at WX was about three years ago in their older space. A large, funky drawing on the wall and an assortment of small drawings. The new gallery is so nice and clean, I decided to present that show in a similar nature; everything has plenty of space to breath, nothing crowded.

You’re most known for your black-and-white graphite drawings, but this exhibition also includes color works and sculptures. Why did you decide to use color in this exhibition?
Exactly for that reason, I have been at the monochrome thing for a long time now. I don’t want to be totally pigeonholed, so I’m mixing it up a little bit. I’ll always make the ‘classic’ RTC images, but I feel a great need to screw around in the studio right now. Color is only part of that equation. There’s also painting, sculpture, music—It’s time to diversify!

What’s next for you?
Summer gardening, working at the local pool, making more work. Showing a 30-foot drawing that I made in Raleigh at Western Exhibitions for their 10-year anniversary!