Since I’m only three years into the Bay Area, the first time I saw Ryan De La Hoz‘s work in person was at a group exhibition entitled “Space//Squared” curated by Sven Davis. But I had heard his name over and over again from enthusiastic fans before that; he seems to make his San Francisco followers very proud with his success. His work at “Space//Squared” was entitled “Bleeding Slab;” stretched canvas made to look like marble with a very non-realistic bleeding cut through it, as if this cold stone slab had some hot blood circulating inside of it. The long row of “blood drops” is a patch like one that would go on your denim or leather jacket, very illustrative with white highlights on the drops. The combination of these two things – the pristine and ancient quality that marble has, combined with a punk blood patch is quite bizarre, but very intentional.

Ryan seems to frequently play with optical illusions and a certain level of visual trickery with his viewers. When looking at his hand-cut paper palm fronds from his work with Fecal Face Gallery, you’re not sure which is cut, the background paper or the positive fronds. Zig zags in black and white make your eyes feel fuzzy. Even upon staring at the works, it’s hard to keep your sense of visual stability or a “what’s what?” with the positive and negative of the composition. There’s definitely a feeling of chaos there, a complete lack of grounding or certainty. This chaos is intriguing to Ryan, especially, and he certainly knows how to get that feeling to resonate with his viewers.

A few weeks after that show, I heard about his venture/brand “Cool Try,” which I immediately loved for many reasons. It’s hard for me not to admire someone who puts out such a variety of solid work. Zines, buttons and apparel, sculptures, pillows, skateboards and fine artworks; Ryan kinda does it all. The simplistic and modern aesthetic of all this work is extremely alluring, and additionally, the myriad materials used in his works all come together very cohesively in any collection he puts together. You don’t always know what to expect from show to show, but you can always tell whose work you’re looking at.

This studio visit was the first time I officially met Ryan. Fresh off of a solo exhibition at Fecal Face Gallery and preparing for a dual exhibition with Kai & Sunny currently on view at 886 Geary, both in San Francisco. I got a chance to finally link up with Ryan and pick his brain a bit. I got to learn more about his motivations, processes, and goals. Learn more about Ryan below and be sure to check out his exhibition currently on view at 886 Geary until July. 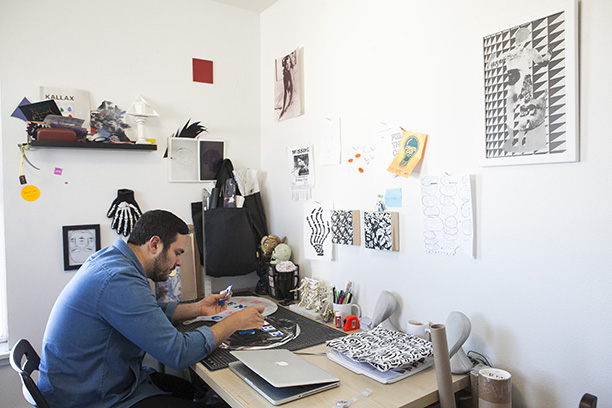 Brock Brake: Tell us about how you grew into the concepts you are working with now. Could you explain some of the parallels between your ideas and the images we are used to seeing from you?
Ryan De La Hoz: I think that it grew from my love of pop culture, materials, and history. That is what led to me examining the past and present at the same time while thinking about modern cultural artifacts such as buttons and puzzles alongside images of antiquity. I think a lot about how history repeats itself: Someone always has to get greedy in their quest for power, then comes dissent, revolution, uprising, chaos, and change. The chaos is inspiring. People doing something radical because they are sick of the status quo is my favorite recurring phenomenon. Some examples would be the fact that the tie dye motif was originally part of the counter-culture / hippie movement of the 1960s and has now lost a lot of that meaning while still remaining aesthetically pleasing to me. I use it as a way to make work colorful while still referencing the very serious movement that inspired it. I also make a lot of work where foliage or static acts as a metaphor and engulfs a figure. To reference chaos, I also tend to make work with a lot of broken vessels or other objects that are on the verge of being destroyed.

“PEOPLE DOING SOMETHING RADICAL BECAUSE THEY ARE SICK OF THE STATUS QUO IS MY FAVORITE RECCURING PHENOMENON.” 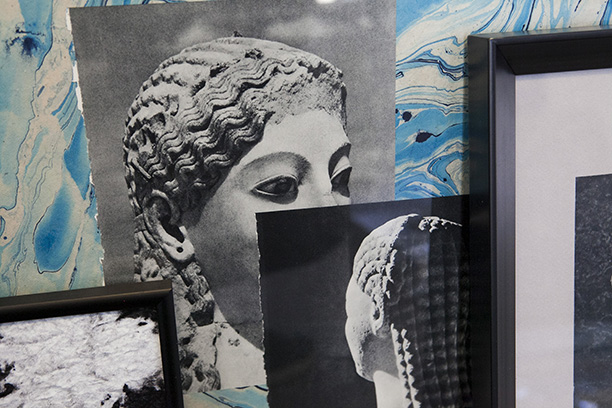 Did you ever intern under anyone? Did you have any mentors?
I am self taught but I feel like the artistic community of San Francisco mentored me collectively. SF can feel really big and yet really small, intimate, and supportive when it comes to the creative community that thrives here.

Did The Mission School Era in San Francisco affect or influence you at all?
It did very much. It was the first time I saw art that spoke to me. It was like it was made for me. Up until that point I was living in the suburbs outside of San Francisco and basically only saw art that had to do with barns and vineyards. I also think that the super flat quality of the work affected me forever along with the idea that art can be made on scraps and with house paint and cheap materials, etc. 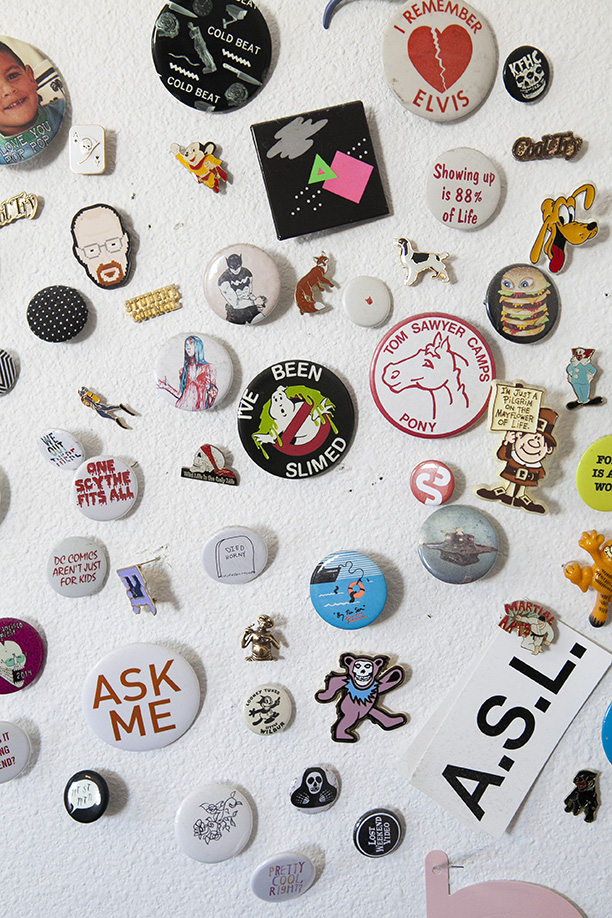 Talk to us about Cool Try. It’s a very commercial venture for a conceptual artist. When and why did you start Cool Try and are there any updates?
Cool Try started when I felt like making T-shirts. It’s really that simple. It has morphed into something that is much bigger these days and we make much more than t shirts. When I began it was a sort of homage to kiosk print stations at the mall where you could get customized shirts, hats, and mugs with your grandkids on them. I was into the aesthetic of printing unrefined photos onto stuff. The only update I have right now is that some secret collaborations with some folks are in the works, and to look for more new gear this Summer at www.cooltry.net. You teach youngsters art… how did you get into teaching? What are some things artists would need to do to follow that path?
I was working at OMCA (Oakland Museum of California) and was tipped off to my current job because everyone knew that I wanted to get into teaching. It is a private school and I do not have a degree so that is how it works out. The bizarre irony is that I cannot teach at a public school where budgets are being cut left and right. Luckily my school is specialized for art so I am lucky to have this unique position. I think that an artist needs (besides a degree) lots of patience and passion for creativity. That’s about it!

What kind of stuff do you teach them?
Painting, drawing, and screen printing in the form of artist focus classes. So I just finished up 4 weeks on Keith Haring followed by 4 weeks on Basquiat in which we were learning about the artist’s life and work and making paintings and projects in their respective styles. 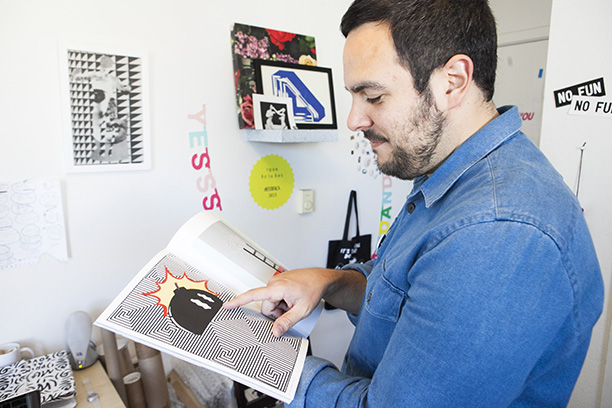 Just last month you had a solo exhibition at FFDG in the Mission and now you have a two person exhibition with Sunny and Kai opening on July 13 at 886 Geary. What are some similarities and differences can we expect in between the two shows?
I incorporated even more media into the 886 Geary Gallery show. There are buttons, puzzles, patches, laser cut plastic sculptures, textiles, paper cuts, canvases, as well as a concrete installation in the center of the gallery. My work is dealing with the same theme these days so the core exploration remains the same.

How has San Francisco evolved in your eyes, as an artist, in the past handful of years?
A lot of galleries have had to close and more experimental ways of exhibiting work have come to the forefront because of it. A great example of this is when The Popular Workshop (Gallery) dissolved and starting putting on satellite shows at the front of  a construction firm under the banner “Moroso Projects.” The great thing about this is that because of the fact that the space is shared, the programming is super experimental and dynamic because it doesn’t entirely rely on sales to exist. The best type of work is exhibited in that kind of setting in my opinion. 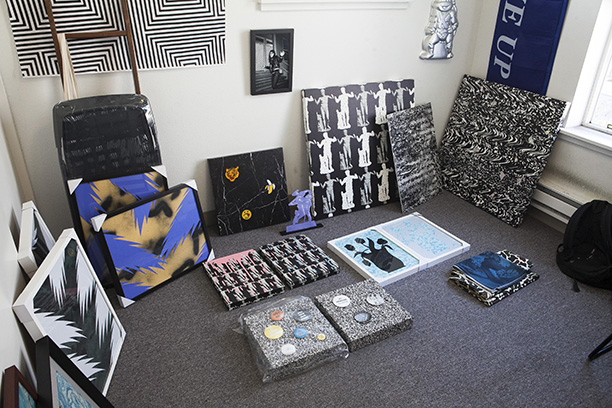 Your works are fairly affordable. How do you price your work? Any advice to artists on pricing their work and playing the market?
I price my work based on gut instinct and material and cost just like everyone else… It stays pretty consistent and goes up over time. I am in no way a hot shot artist with a gigantic roster of collectors. That might have something to do with it [smiles]. I am not interested in playing the market. That could be a problem, I know. I just like to make stuff and not get stuffy. Artists should do whatever they want – isn’t that why we became artists in the first place? 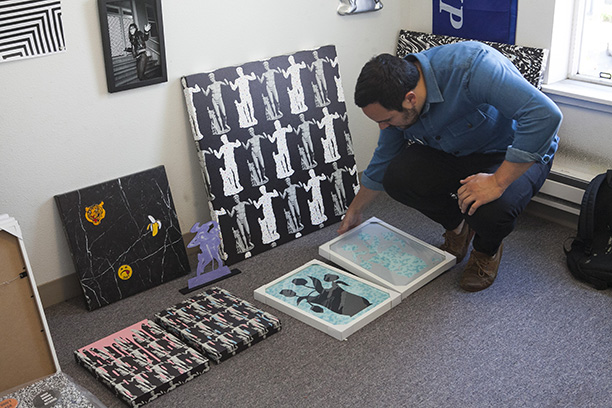 The Hundreds Staff
Learn a little bit about Jess Valice, featured in our latest round of Artist Series Bandanas, available now...

The Hundreds Staff
We caught up with Jaime Muñoz to chat about the newest addition to our Artist Bandana series, available now in the Online Shop...

The Hundreds Staff
Join us in celebrating all of the climates, both environmental and social, of California with The Hundreds Winter 2021 collection, releasing tonight at 9 PM PT.

LIGHT BULB MOMENT :: Ron English is Grinning About the Future of Art

Duke London
Legendary pop artist Ron English has strong ties to our past and the future, and we caught up with him to talk about both...
HIDE COMMENTS