Straight outta Richmond, Virginia, the boys of Round Two—Melrose’s insane new vintage buy-sell-trade boutique—have an equally insane story to match. It’s a whirlwind narrative of East Coast attitude, secondhand obsession, throwing caution to the wind, and realizing that your worst case scenario truly isn’t ever that bad. These guys went with their gut, and at the ages of only 25 and 23, respectively, Sean Wotherspoon and Chris Russow, just opened their second Round Two location here in Los Angeles on Melrose last week. Their original location in Richmond is still running strong, headed by their third partner Luke Fracher, along with a webstore.

The Round Two story is probably one of the most unbelievable come-up stories I’d heard in a minute—and I’ll tell it here on thehundreds.com very soon. But for now, I’ll leave you with something that’ll help you get to know the boys a bit better (you could also just watch their show). I asked Sean and Chris to put together their 9 favorite apparel and sneaker items currently in the store that day before opening, and talk a little bit about each. We had photographer Julian Berman shoot their picks on the reclaimed wood wall they set up that is now a shoe wall for rare kicks since store opening. Check out their list below and seriously visit the spot at 7320 Melrose Avenue; they’re open from 11am-8pm everyday. I 100% guarantee you’ll find a piece that makes your heart beat faster. 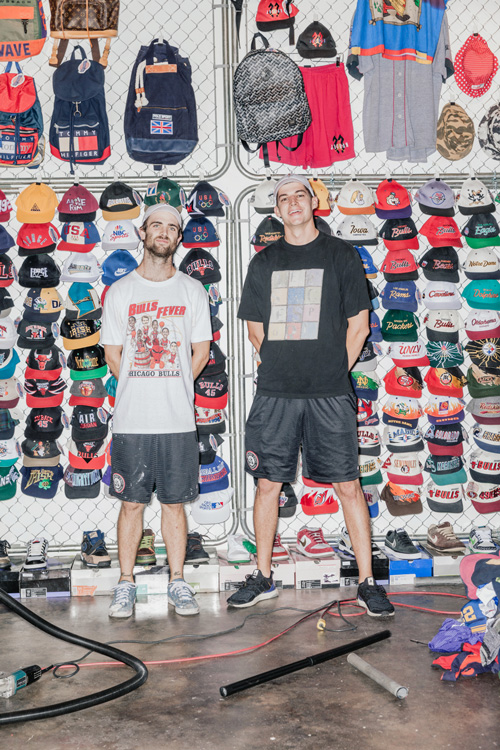 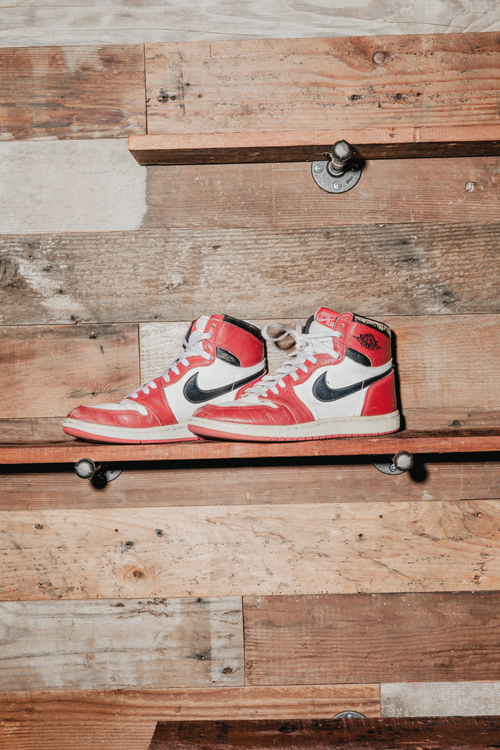 Sean: This is it. This is what started everything.

Chris: Without this, Round Two wouldn’t have ever become a thing.

Sean: Without this shoe, we wouldn’t be around because it started everything. These are really special to us. We have a lot of appreciation for original and where things started, so this is kind of the definition of that; this is where it all began. Great quality—it’s a golden-era-of-Nike quality, they were putting so much time and care into stuff so these mean a lot. For every sneaker collector, this is the pinnacle of your collection. You’re like, “Alright, I got the first pair of Jordan’s.” 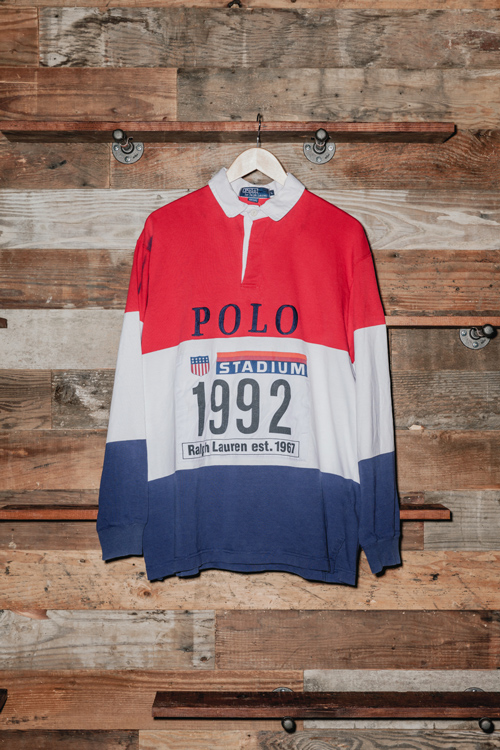 Sean: This is 1992 Polo Ralph Lauren stadium plates rugby—all the Lo heads call it “the plates rugby.” I guess this is the plate that would be on a runner’s rugby or track uniform when they were in the Olympics back in the day. The Polo heads call this a power piece, it’s super dope. I like the colorway a lot, the red, white, and blue. And I really appreciate the “Made in the USA.”

Chris: You just see pictures of all the Lo heads where they’re all together and they’re all decked out in those. The plates was a huge thing.

Sean: We weren’t alive during all of that, so owning these pieces are the closest we can get to actually being there. That’s the underlying reason of why we love all this stuff too. 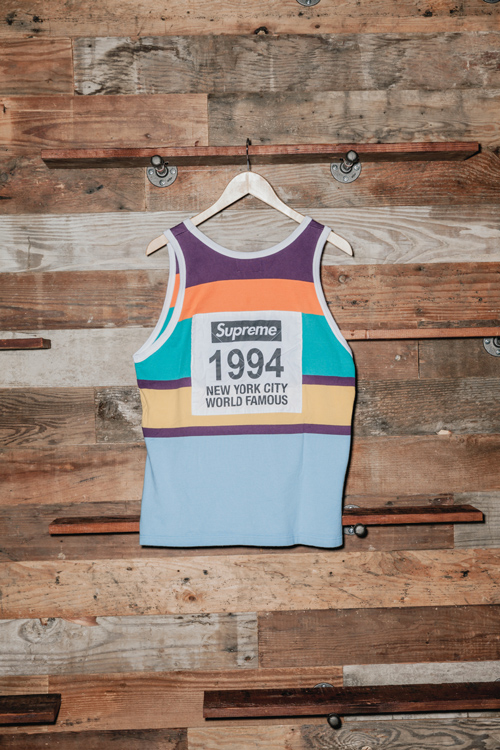 Sean: This is awesome. This is a Supreme rip of the Stadium Plates thing that Polo made… instead of doing ’92 Polo, they did ’94 because that’s the year Supreme started. I chose this item because I want people to understand that we have way more than just the average Supreme in here. That’s the thing, there’s a Supreme store here. So we want people to come here and get this crazy, original Supreme stuff that they may not even know exist because they’re so used to the new [releases].

Chris: A lot of Supreme shit has been ripped off of Polo, so with many basic things that Supreme does, you can find a Polo version of it. 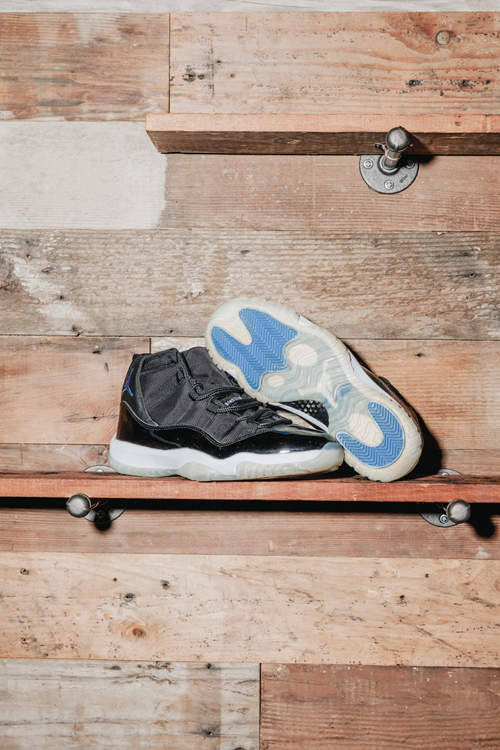 Sean: I love the movie to death, it gives me goosebumps even talking about Space Jam. Whenever I watch it, it’s so nostalgic for me… those are the shoes that Michael Jordan wore in it, so we love ’em. Everyone likes them. This pair specifically has an extremely icy sole, which is very rare for those. They’re just cool as hell. 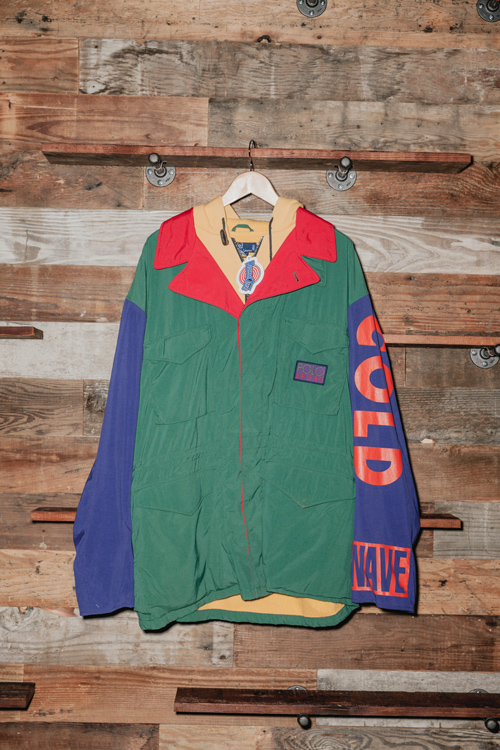 “I really thought I would live my whole life without ever touching one of these.”

Sean: Aside from this being another Polo power piece that people love to have, it’s just beautiful.

Chris: The whole Snow Beach line is one of the most coveted Ralph Lauren lines ever. If you get a Snow Beach item, that’s the pinnacle. These are the types of jackets that me and Sean never would have thought we would own.

Sean: It felt good to say, “Okay, we now made enough to where we can own this piece.”

Chris: I really thought I would live my whole life without ever touching one of these. 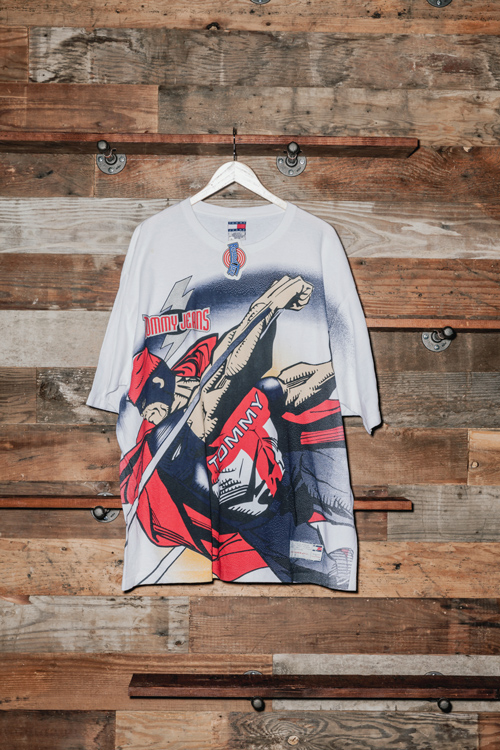 Sean: This is a cool Tommy piece, I’ve just never seen it in my life, but it popped up on eBay and I thought, “This is cool as hell.” It’s just a vintage Tommy Hilfiger, Tommy jeans. It’s Superman, but with a Tommy thing on his chest.

Chris: Another one of our goals here is to get things that you just don’t find anywhere else, we just want to have all stuff that when you come here, this is the only place you can find it. That’s a perfect example, we bought it just because we’ve never seen it. It’s cool that somebody can walk in here and it’ll probably be their first time seeing it and it’s in our store.

Sean: Someone could go to the rack, pick that out, and say, “Oh, I’ve never seen that before.” Boom, we accomplished that. There’s not really a specific name for it or anything, I would call it the Tommy jeans, Tommy superhero. Tommy Jeans Tommyman. 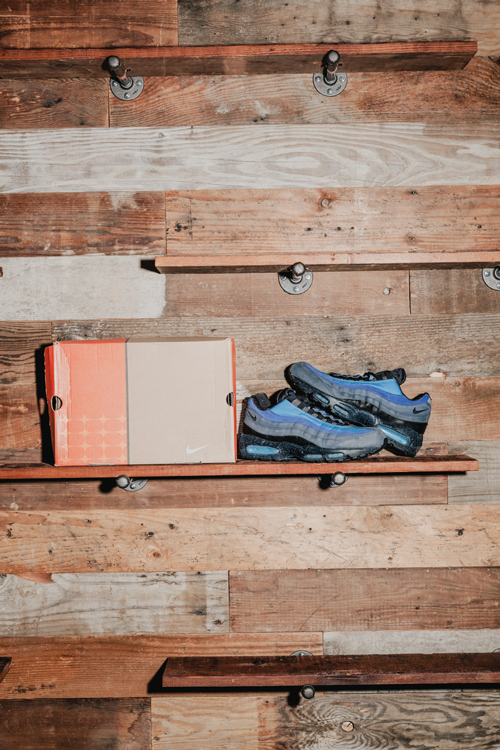 Sean: Blue’s my favorite color since I was a little kid, so I just love this shit… Stash is the man. I just love his blues, speckled sole—his art is just perfect in my eyes.

Chris: Also what’s cool is Stash posted a picture of him wearing those [a few] days ago. Still from 2005, he’s like, “Sample pair.” 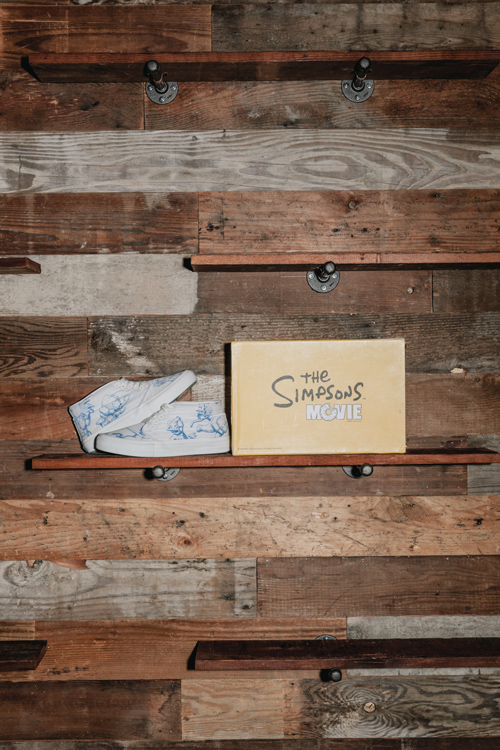 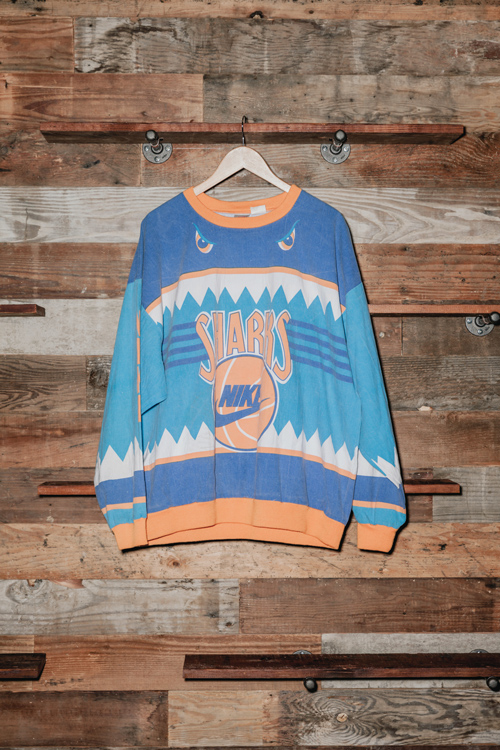 “It just feels good knowing that Nike thought this was awesome at some point.”

Sean: [When we first got this], we’d never seen anything like it before. We said, “Yo, that’s the sickest thing we’ve ever seen!”

Chris: So we hung it up on the wall and we had it there until we moved our store.

Sean: I guess Nike made this in the mid-1980s for a high school basketball team I think and they were called the Sharks. We loved it so much—

Chris: That we made our own version.

Sean: We ripped it for Round Two. Round Two shark jerseys [in the] colorway of the original one we had, which is red.

Alina: Is this like a highly coveted piece or are you guys just obsessed with it?

Chris: Nobody knows about it, that’s the weird part.

Sean: Once you find out about it, you automatically love it and you’re in love with it. It was one of maybe 10 pieces that have come into Round Two that we’ve never ever sold in our lives. The original one that we had back home is not for sale, but this one’s for sale. 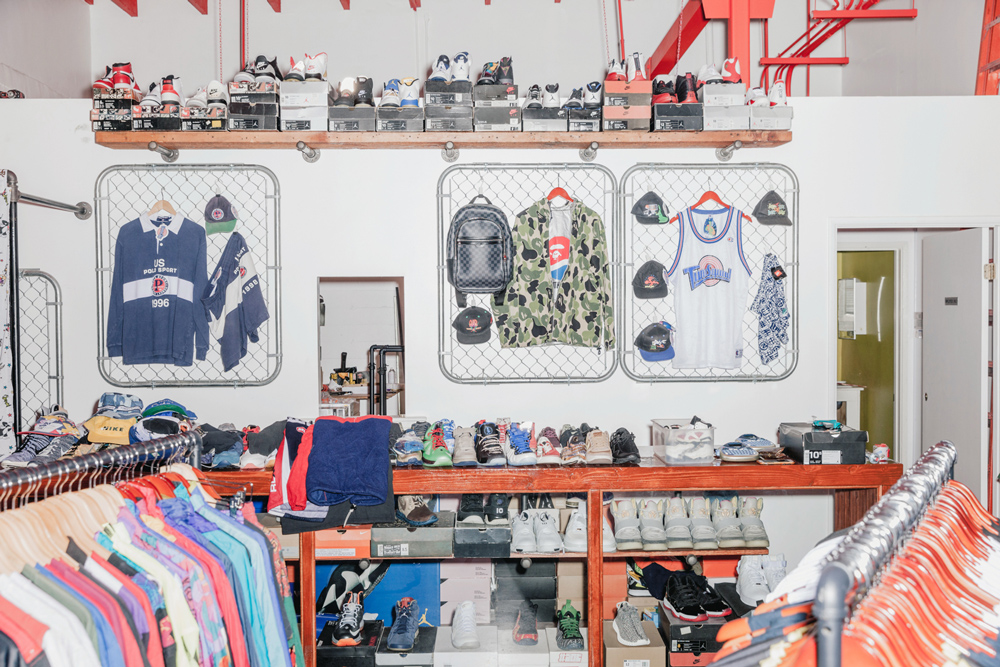 Keep up with Round Two Melrose at @roundtwohollywood. They post new finds everyday. They’re located at 7320 Melrose Avenue, and are open from 11am-8pm everyday.

Photos by Julian Berman. Shout out to Alex Aimaq. Q&A :: These Vintage Apparel Experts Provide Inspiration Pieces for Every Brand You Love

Chris Danforth
Chris Danforth sits down with vintage apparel expert Jesse Heifetz who runs F as in Frank, a Toronto vintage retail store that sources "inspiration pieces" for brands from Marc Jacobs to Supreme &a... Seb Carayol
The coolest man with the finest of tastes, DJ Chavez, rounds up his 5 favorite ultra-rare vintage skate graphic tees and why. Alina Nguyen
Alina and Zach hit up Rin Tanaka's vintage & Americana tradeshow Inspiration LA this past Friday and learned a thing or two about heritage and the resilience of clothing & its stories.
HIDE COMMENTS