Off-the-Street :: Slow and Steady in Yellowstone

My last three posts on here have been a bit heavy on the street tip, so I thought I’d take a brief intermission from that vibe and showcase some of my off-the-street snaps:

Though street photography will always be my first love, I do enjoy switching up the routine and shooting other shit: landscapes, editorial assignments, commercial gigs, and sometimes even weddings for the right people. Surprised?

It’s not so much the change in environment that attracts me, but more so the approach. I’m fascinated by the idea of applying my street style, perspective, and aesthetic to other genres—mostly landscapes and wildlife, in this case. I’m all for going against the grain whenever and wherever possible. That’s how you stand out in this craft.

These particular photos were taken last summer during a five-day adventure in and around Yellowstone with the wifey, sans the kids. Why Yellowstone, you ask? Why the hell not? Through other circumstances, we pretty much came up on a free place to stay in the Teton Valley, about an hour-and-a-half from Yellowstone’s West entrance. We both love shooting photos, and we both were looking forward to a short break from the kiddos (our first in four years). Though I had been to Yellowstone once as a kid, this was my wife’s first visit—and we were both ecstatic. 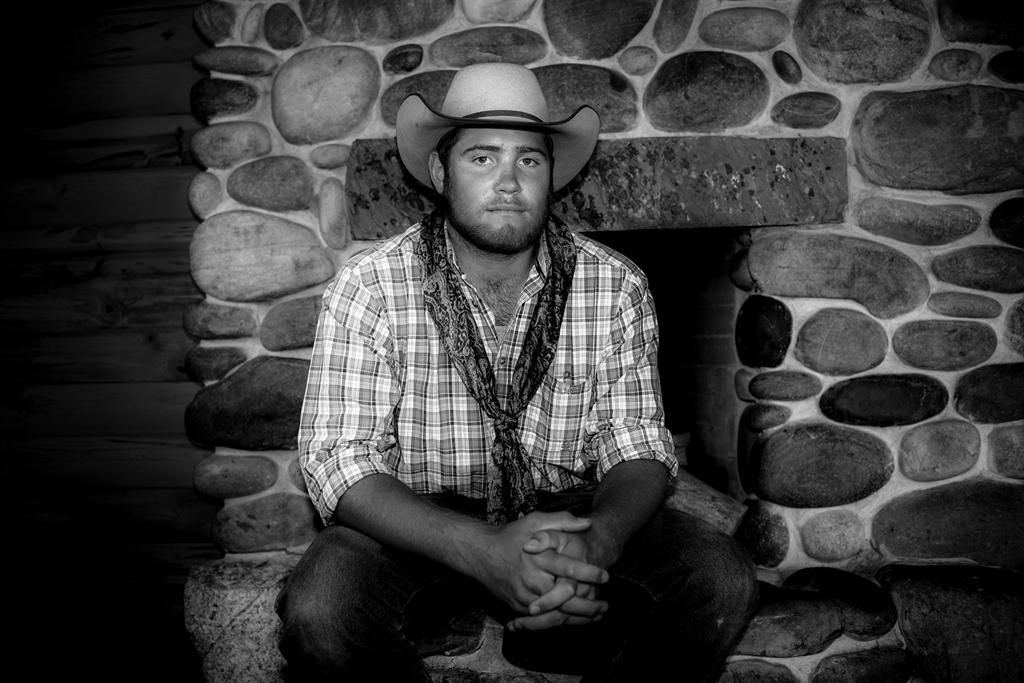 With the exception of my iPhone shots (none pictured here), I never even bothered looking at the files until now, a year later. I tend to do that with personal travel snaps—sit on them for some time, as I otherwise find myself too attached to them, resulting in having higher expectations.

I find that tossing photos aside to be processed at a later date allows me to sit down and edit with a fresh perspective and zero expectations, since so much time has passed. It also gives me something to look forward to when the timing’s right. The same can be said for those that choose to shoot and develop their own film—same message, just a different form of delivery. This concept goes along with the whole point I made in a previous post about photography not being a contest or a race. Take your time and don’t feel obligated to constantly feed the damn machine—slow and steady wins the race. Less is always more in this craft, I’ve found.

Stumbled across this old cabin outside of Tetonia, Idaho, about two hours south of West Yellowstone, Montana. There was a crazy handwritten sign at the beginning of the road leading up to the cabin that read: “No Trespassing! You will be prosecuted IF you survive!” I think it was worth it. Those are the Grand Teton Moutains in the background. 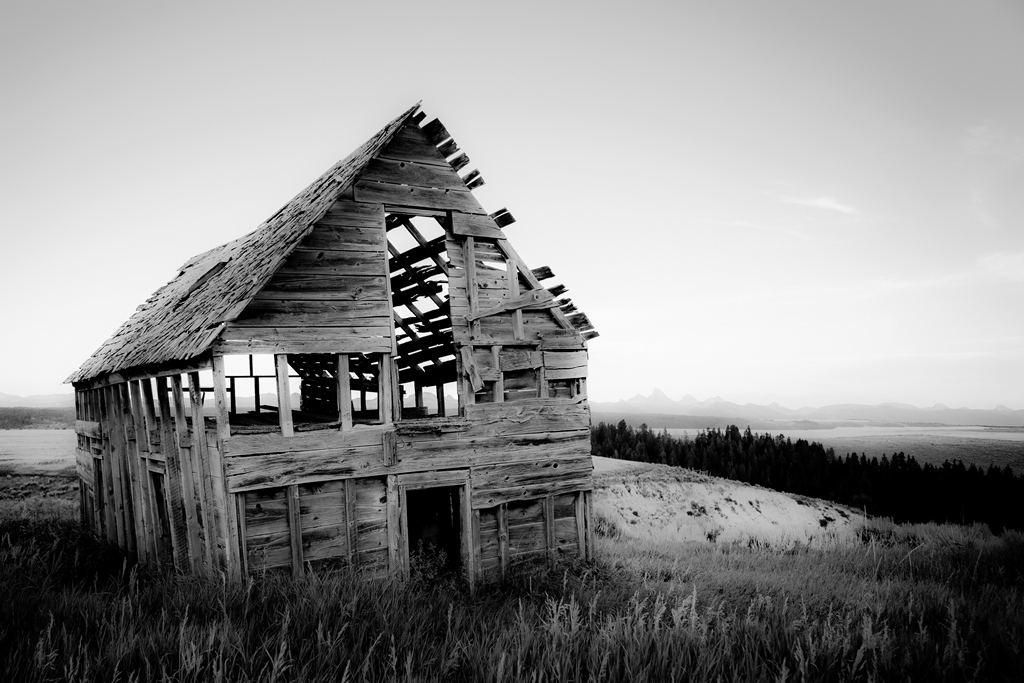 This was a smaller geyser in the same area as Old Faithful. I believe it’s called Castle Geyser, but I may be wrong. From a photo standpoint, I found this bubbler way more interesting than the main attraction. I love everything about this photo. The mood, the decay, the contrast… The sun was setting in the western mountains and everything felt as it should be. I remember feeling quite spiritual... However, driving back to our spot in the middle of the night—the one a couple hours away in the Teton Valley—was mad sketchy. Not just because of the cops. I got pulled over 15-20 minutes after chiefing a Backwood in the whip. Thankfully nothing happened, but you also have to worry about wildlife darting out in front of you. Slow and steady in those parts. For real. 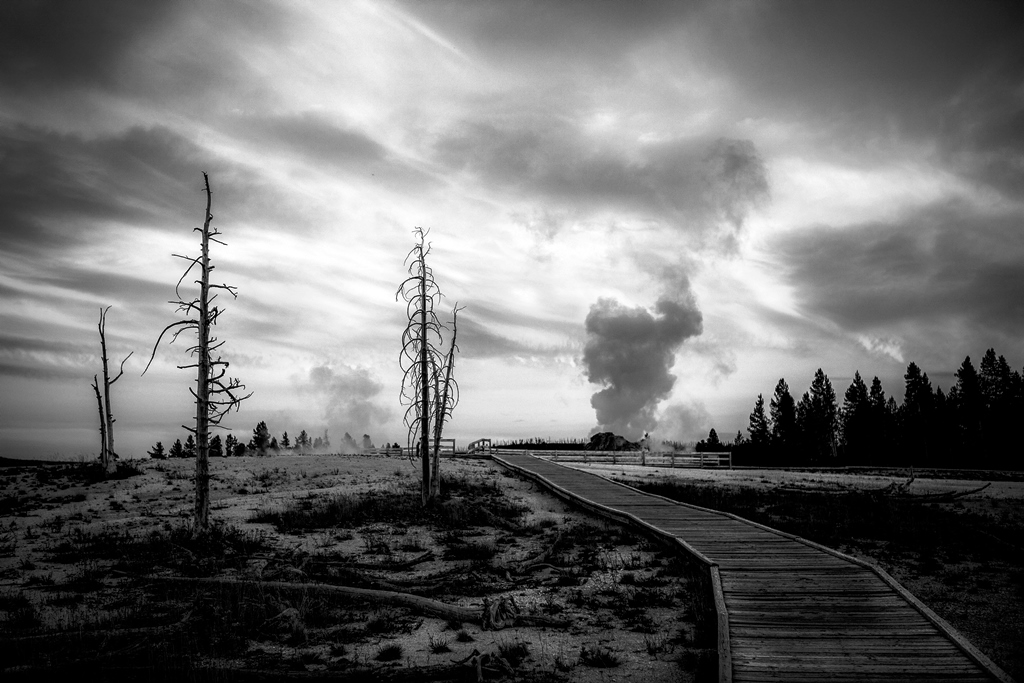 Pulled over on the side of the road moments before a storm for this one. Northeast Yellowstone, near the Wyoming/Montana border. Now I see where the phrase Big Sky comes from. Fucking incredible! 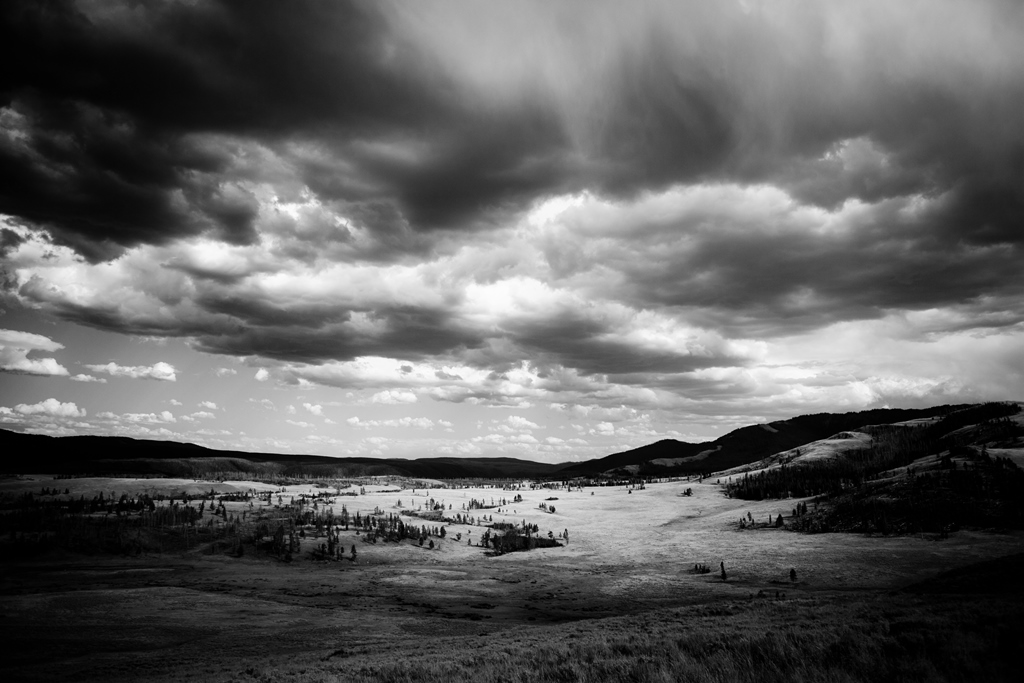 This cabin is located somewhere in the Antelope Flats, outside of Jackson. It was featured in the movie Shane (1953). A Forest Ranger told me about it. We bumped into a couple local kids at this spot—early twenties maybe, just hanging out. One of the girls, the daughter of a local sheriff, told us about some preserved ghost town that was a seven mile hike away (she thought). I’ve been on those types of missions before in the woods, where seven miles turns into 20 and you find yourself in a bad situation, stuck in the middle of nowhere. I wasn’t about to risk it. The crew then warned me about the penalties for getting caught with and/or smoking the ganja in those parts, but that was after I gave them half a Backwood stuffed with some Northern California delights. Some of the best in the world, for real. 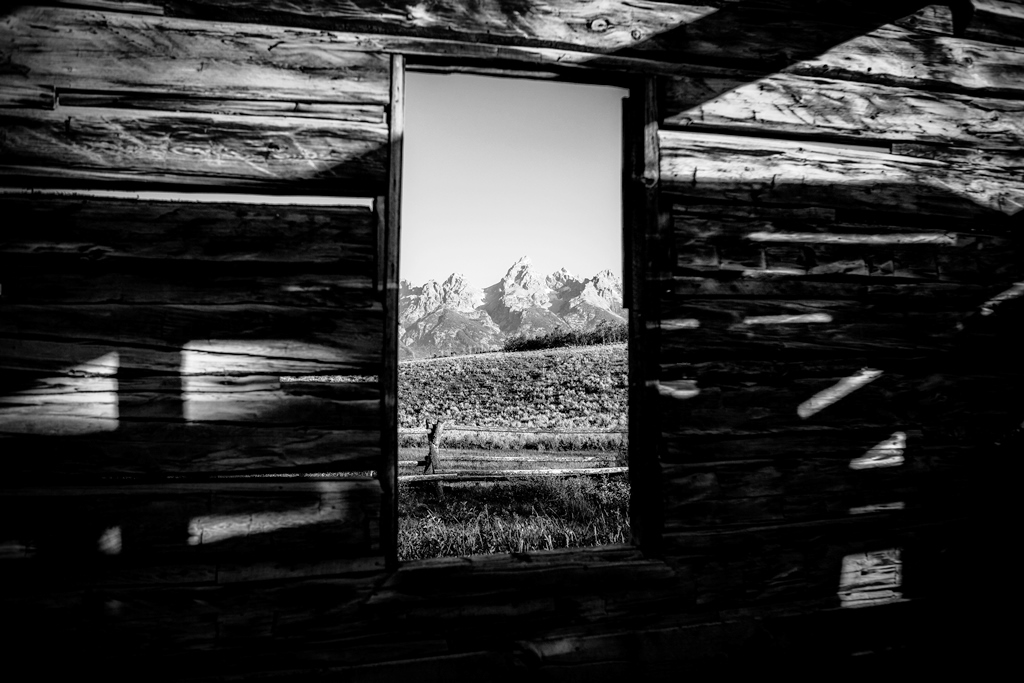 I can’t even begin to tell you where I snapped this, other than that it was an area in the park recovering from a forest fire. I think this might be my favorite frame in the batch. It almost looks like intricate scribes or etches on glass, but on some galactic, wildstyle landscape shit! 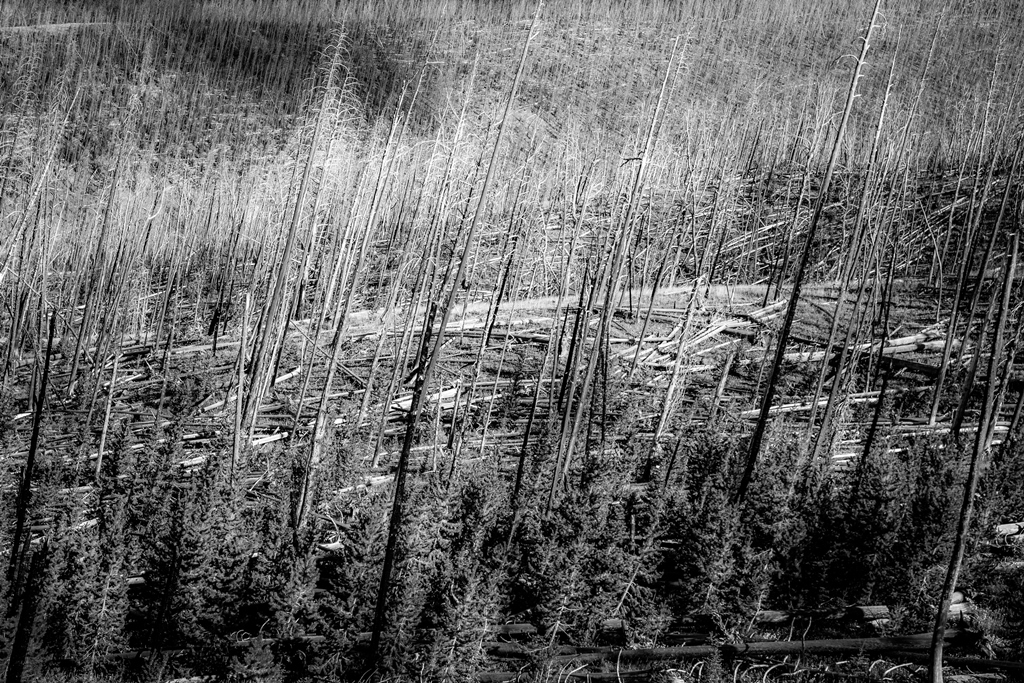 Same as above, I can’t remember exactly where in the park we spotted this brown bear, but will tell you that I snapped it from a pretty close range, maybe 70 meters? I was a good 200ft from the car and feeling a bit nervous, but determined to get a snap. We saw a grizzly earlier that day, and it was a freakin scene. The ranger was yelling at me to get back in my car, blowing a horn, but I wasn’t trying to hear it. I was too focused on getting a decent shot. Unfortunately, the two or three frames I fired were all duds. But holy shit are those things big and fast! I watched the grizzly swim across a river, scale a mountain to the street, then dart up another mountain above the street all within a matter of minutes, something that would take a human upwards an hour. 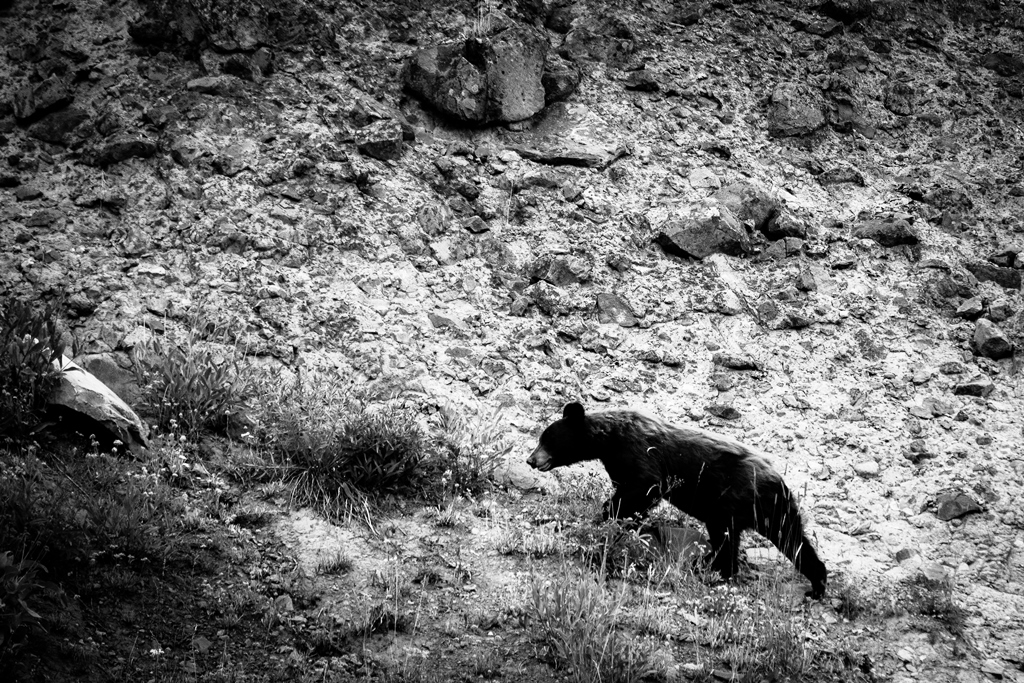 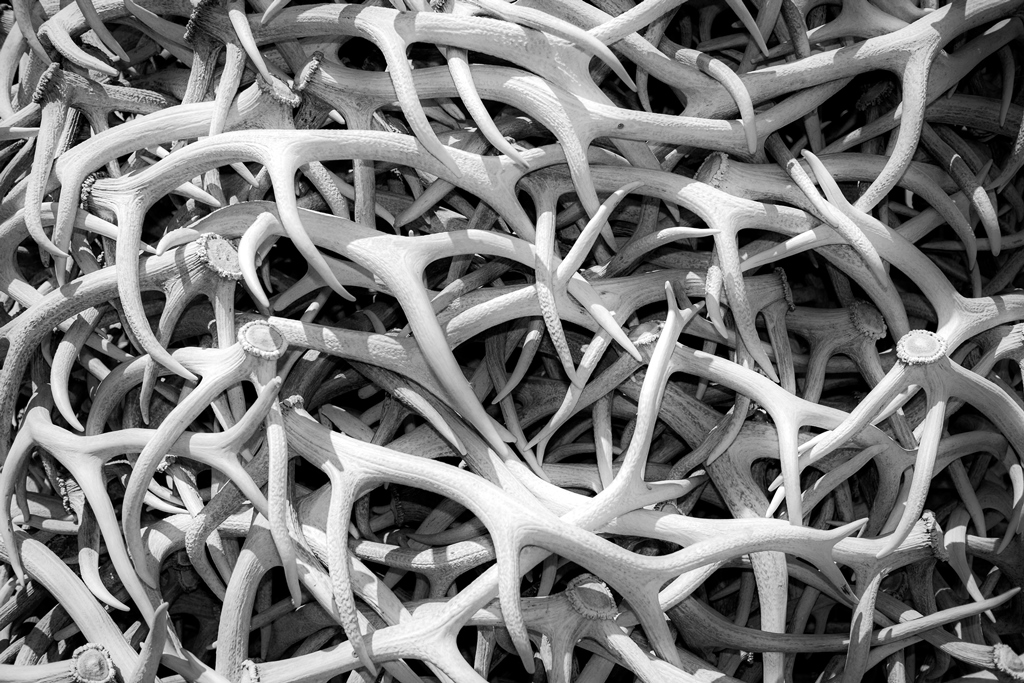 Out of all the wildlife we encountered, the bison are my favorite—slow and steady, though fast and powerful as all hell when needed. 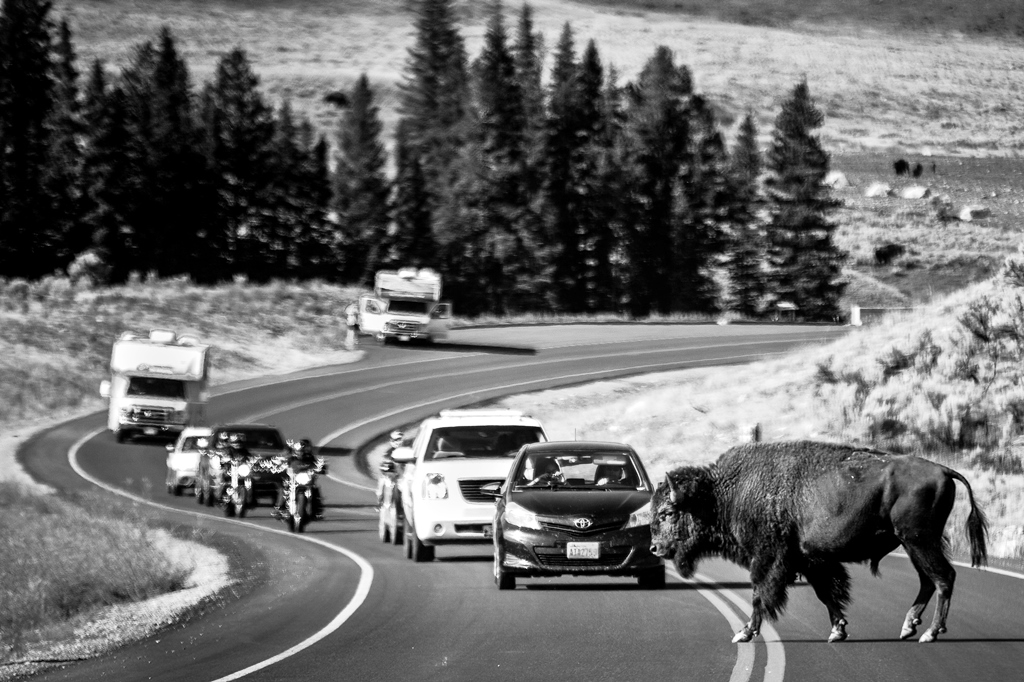 These cowboys right here were the real deal. We spotted them on our drive home outside of McDermott, Nevada, population 513. I slammed on the brakes as we passed and put the car in reverse to stop and talk to them. They were a little weirded out about the fast-talking city dude with California plates and tattoos, but agreed to let me take a few snaps. I was worried about the light being a little too harsh, but I’m actually diggin the results with their faces being shaded by the cowboy hats. I underexposed this frame on purpose, hoping to add more moodiness to the scene. 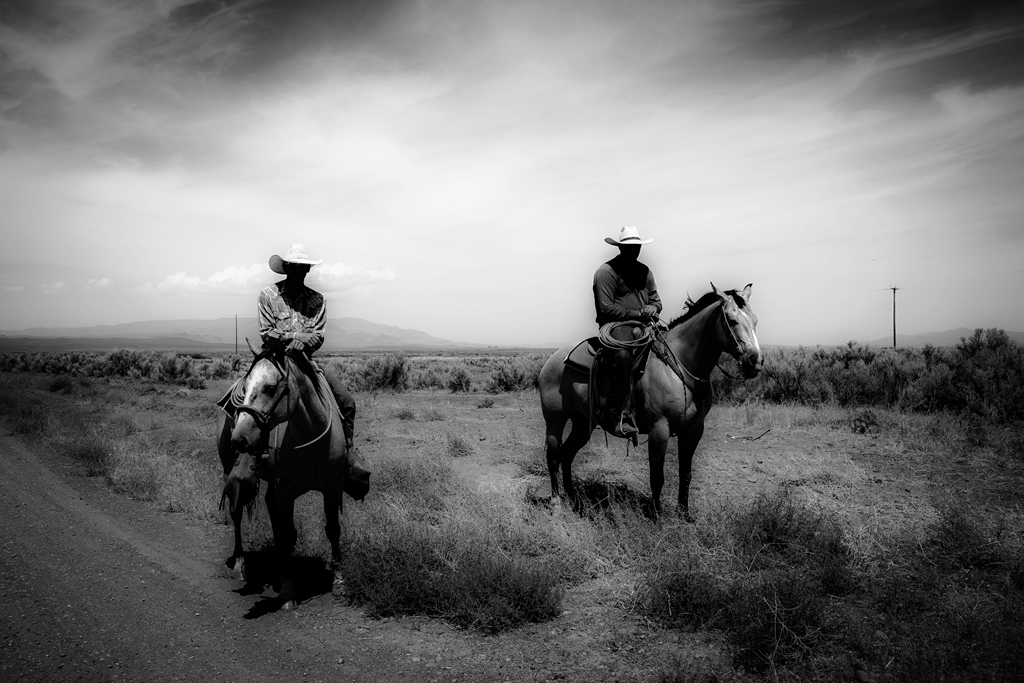 Yellowstone is a place where I could easily spend a few years photographing. It’s vast, it’s wild, it’s mysterious. A bit spooky and fascinating as all hell to me. In fact, I’m thinking that’s where I’m going to “retire” as an old shutter bugger. I’ve tried my best to caption the photos and locations as accurately as possible, but some stuff may be a little off. I’m not a spot Nazi, so feel free to hit me up for location suggestions if you should find yourself in those parts, but not before doing your own research…

I’m thinking I’ll highlight some of my Iceland snaps next, where I applied this same approach—sitting on the files for a while and coming back to them after allowing the distance to settle in.

Be easy. Be safe.