It’s been over a week now, which in Internet time is about 15 years, so I assume any and all initial knee jerk reactions have since subsided and become well-thought out conclusions on what exactly Seattle’s wunderkind, and protested Grammy winner, Macklemore meant when he dressed up in disguise for a surprise set at his hometown’s EMP Museum opening. In the same way I found out about the Boston Marathon bombing (not kidding), I first heard about the controversy through comedian Seth Rogen’s Twitter account, who tweeted a picture of the now infamous costume with the caption “First you trick people into thinking you’re a rapper, now you trick them into thinking you’re Jewish?” I clicked the link he posted, like many others I assume, and was shocked to see Macklemore dressed in a cheap suit, sporting a black bob wig, a shaggy beard and a comically large fake nose, which when worn together would probably make Matisyahu very sad. He looked like if Larry King was a Rabbi. It didn’t help that his most popular song is about saving money. Since the initial Rogen tweet, the accusations caught fire and were reported on by ABC News, The Jewish Press and your mother texting you, “Who’s this Macklemore?” Since then, the rapper first scoffed at the accusation, only to humbly apologize a few hours later for any offense the Jewish community may have taken with his get-up, admitting that was the last of his intentions when he decided to have a little fun and surprise the audience, but understood the uproar. Whether or not you believe Macklemore really depends on your opinion of the rapper himself, but also just might be a reflection of your sensitivity to the Jewish community.

Last week, the Anti-Defamation League (ADL), a well respected Jewish non-governmental organization that Macklemore apologized to directly in his statement, released depressing results of a global survey that revealed that one in four adults worldwide are “deeply infected with anti-Semitic attitudes.” The survey asked 53,100 adults from 102 countries, representing almost 88% of the world’s population. SO YEAH, one in four people! For reference, that means that one member of B2K hated Jews. Also, as if that’s not terrifying enough, over half of those surveyed had never heard of the Holocaust, and only 1/3 of those who knew of the genocide believed the historical descriptions to be accurate. To push you further onto the ledge, when individuals were asked in their native language if they found specific anti-Semitic statements to be true, such as “Jews have too much control over the global media” or “Jews are responsible for most the world’s wars,” 26% believed at least 6 of the 11 statements to be true. That percentage represents over 1 billion people across the globe. Although it wasn’t part of the survey, I wonder how many of these people thought Kendrick Lamar should’ve won Best Rap Album over Macklemore.

I am what many would call a Macklemore defendant. As a serious hip-hop historian, I’m not 100% sure that his music is any more damaging than say Memphis Bleek’s Shampoo commercial, MOP’s song with LFO or Flava Flav’s reality dating show, but I do understand how some might find his optimism and pop-friendly music grating. Like most of my opinions on hip hop, I usually form a judgment solely based on if the MC can rap or not, and I genuinely believe the rapper born Ben Haggerty CAN rap. Also, the dude has been at it for over ten years. He’s not an overnight sensation, and even if he’s basically Atmosphere for Hot Topic, it seems to be genuine and heartfelt, which in 2014 isn’t easy to come by. So before you start just calling me a Macklemore hater, keep in mind – I may not be in his “Shark Face Gang,” but I downloaded “White Privilege” years ago and only have respectful things to say about his truly impressive career. With all that in mind, Macklemore made an insanely fucking stupid mistake. 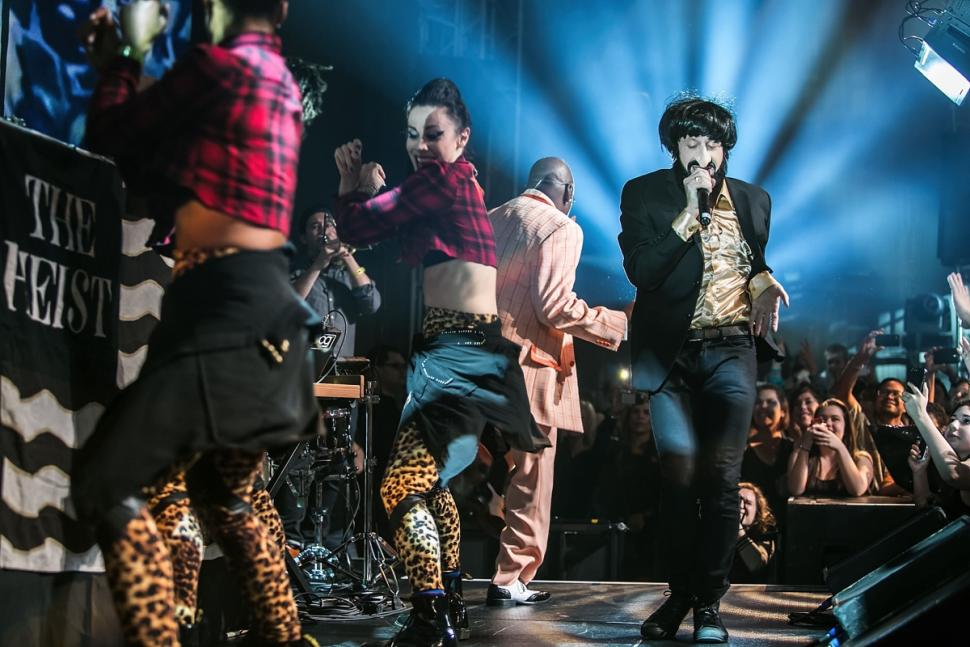 His first apology, or what I’ve coined “the tweet before the publicist called,” said “A fake witches nose, wig, and beard = random costume. Not my idea of a stereotype of anybody,” and that’s just painful to hear. I understand that some people on the Web have claimed that the costume looked more like Ringo Starr than a caricature of an entire religion, but I’m not sure Ringo Starr has ever been mocked for having a large nose (talentless yes, but large nose? No). And upon further inspection, most of these people who I engaged with online about the controversy, after one of my Macklemore tweets went somewhat viral, weren’t actually Jewish. That’s like asking the Duck Dynasty guy what his favorite musical is. I guarantee you this, if I could magically go back in time and ask Macklemore what his name was, right before he went on stage and exposed his true identity, he would’ve jokingly said something like “Saul,” “Ira” or “Abe.” That’s what would’ve happened. Let me state, I don’t think Macklemore hates Jews, and if he did, he wouldn’t expose it at the height of his fame during a concert. He’d do it at the end of his career, like Mel Gibson did, or hide that shit like allegedly Walt Disney. But that doesn’t excuse a terrible decision he made. I believe Macklemore picked a costume to disguise himself as an older Jewish man, not fully understanding the harm and history of the stereotypes that went into his disguise. When Ted Danson sported blackface and used the n-word at a Whoopi Goldberg Roast 20 years ago – no one with a brain thought Ted Danson was a racist. He was actually banging Whoopi at the time (which could technically be the most offensive thing in this article). But again, that doesn’t excuse his insanely fucking stupid mistake.

My other favorite thing I’ve heard since “the witch nose heard around the world incident” is that people like myself are the actual bigots, because we took an innocent costume and assumed it referred to Jewish people. With this logic, nothing could be racist. Racism exists with stereotypes and visuals that predate shitty movies like “Crash” by 100’s of years. I’m not racist because I utilize history to form an opinion. That actually makes me smart. And knowing what a large portion of the world already thinks about Jews, we don’t need your help, Macklemore. 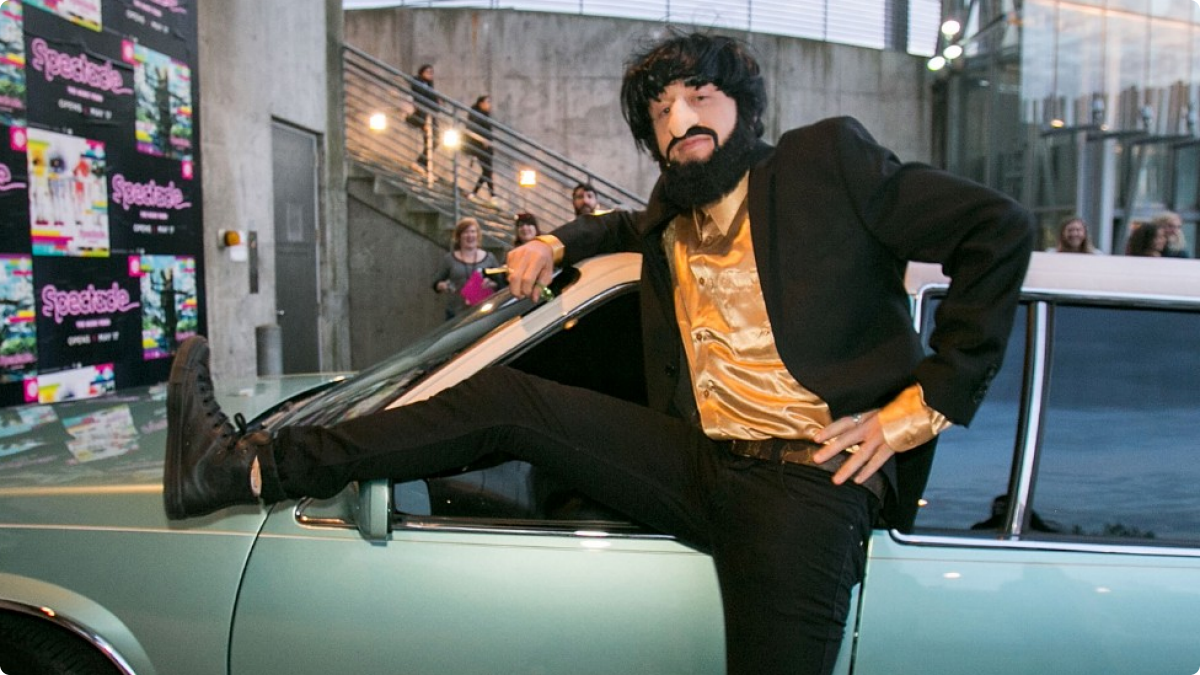 As a Jewish man, with a sizeable nose, I wasn’t offended by Macklemore’s costume. I’m only offended he made a song condemning Nike but now has his own Jordan colorway. In a former life, I too was a white rapper. I was signed to Interscope Records at 20-years-old under the moniker Hot Karl, and had both the best time of my life, and the most embarrassing. One instance that falls into the latter was a decision I made at one of our early sold out shows in Los Angeles. That whole week I had been on the radio taking jabs at the singer Tyrese, for no real reason other than I thought it was funny and his name rhymed with “beef.” He allegedly had called the station and angrily asked what I thought I was doing. I even heard through the grapevine that if he ever saw me, I’d regret my words. So anyway, I did it more often after that. And during my senseless onslaught, I got an email from a fan in Los Angeles who said he couldn’t go two blocks without being mistaken for Tyrese. Once I saw the photo he attached, I was surprised his mother didn’t think he was Tyrese. He said if I ever needed his services, he’d be glad to join in on the fun. So, with only evil intentions, I asked him to join our stage show. That night, in between songs, I told the audience that they were in for a special moment. I explained that after a month of constant jabs, I was finally going to bury the hatchet with an enemy and tonight would start a truce between us. I apologized for all my harsh words, and said that fans won’t believe their eyes. With that, my DJ played a Tyrese song and the crowd went ape shit. We wheeled our Tyrese look-alike tied up and gagged in an office chair. He was wiggling and yelling to be saved for an entire song, as we rapped around the kid, taunting him. We thought 3 white kids torturing a helpless African-American was funny, and I didn’t fully understand the stupidity until Will.I.Am (before he became a robot) called me to express his concerns. I immediately realized that with the context of history and race relations in general, this bit wouldn’t always have the same effect on viewers as it had on me, a suburban white dude. I had to acknowledge that I made an insanely fucking stupid mistake. Although, I still hate Tyrese. 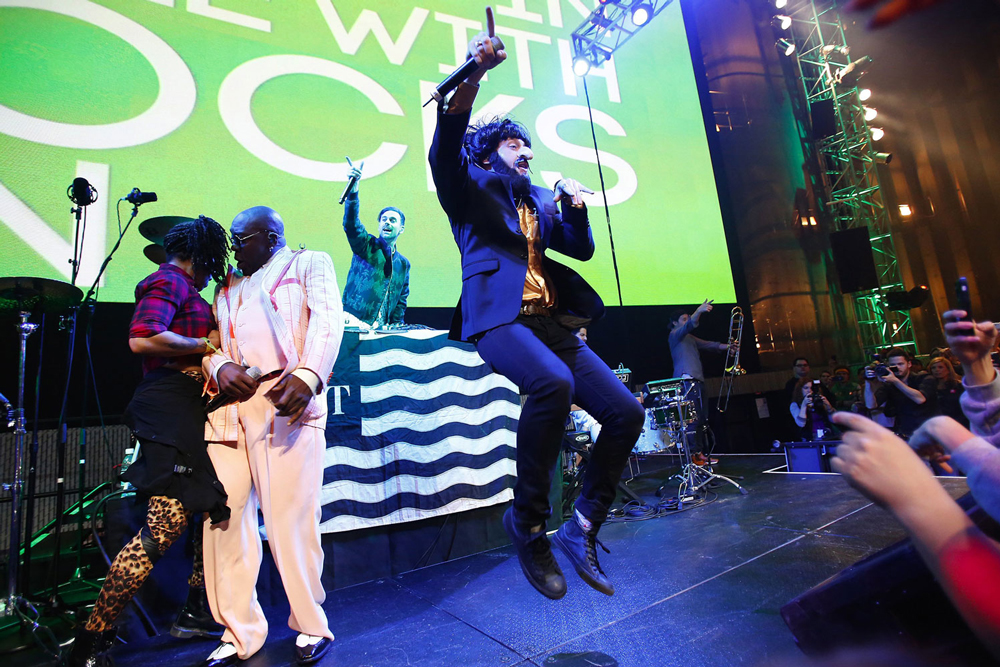 Macklemore will live to see another day. Unless next year at Jingle Ball he comes out with a Swastika carved into his forehead spouting German expletives, people will realize it was a one-time mistake and he’s learned the sensitivity around Jewish stereotypes. Whether or not you dig the guy’s music, that’s up to you. But like my father used to say, “Everyone is allowed one mistake.” Then he’d pull his extremely large nose out of a bowl of Matzo Ball Soup and go back to counting his money.