Last summer, during the 2014 World Cup, the German-born Low Bros painted a monumental mural inspired by the tournament: Four wild cats—rendered in geometric shapes and a patchwork of jaguar spots, palm fronds and favelas—circling around Maracana Stadium. The mural was impressive, not just for its size, but also for its precision and imagination—two things that the Low Bros have become known for.

Their work, executed with an acute attention to detail, often features anthropomorphic animals in sideways hats, sunglasses or starter jackets. “Our animal characters often represent certain stereotypes of a group of people we have met or observed,” says brothers Christoph and Florin of the Low Bros. “A character can also become representative of a whole subculture. But sometimes they can also be representative of a place.”

It’s a definite nod to pop culture, and is reminiscent of what it felt like to grow up in California in the 1990s. “Maybe the most influential California thing was skate culture. We used to skate and watch all those videos that showed the pulse of those times, like the ones from the Bones Brigade. Graffiti and skateboarding have a lot in common: It’s about reclaiming the streets.”

Though the Low Bros are inspired by California culture, it is one place they have yet to travel to. But their “dream will come true” in June, when they have their first solo exhibition in Los Angeles, which they talk about in the following interview, along with their favorite places in Berlin, their goals are for 2015, and much more. 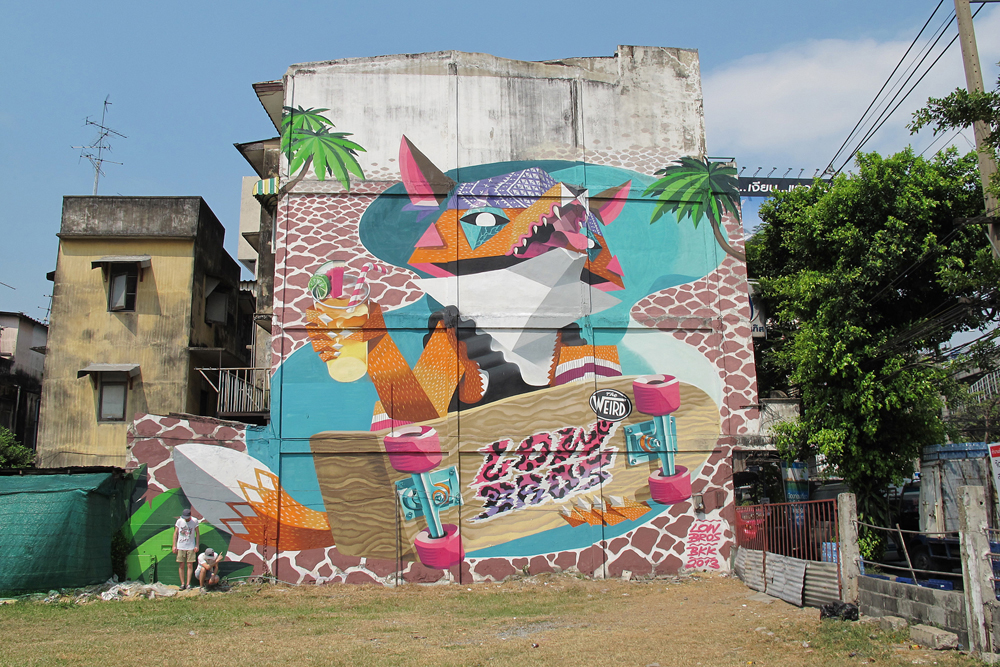 ZIO: What was it like growing up in Hamburg? How do you think this place impacted your style?
LOW BROS: We had a nice childhood and youth in Hamburg. It is a clearly arranged and structured town and not so snotty and multifaceted as Berlin. On the other hand, there is a strong and vivid graffiti scene in Hamburg that had a great impact on us. We used to be part of a crew called TPL, but there are many other brilliant writers with whom we had a lively contact. In those times, that was the only way to keep up to date as the Internet did not exist then. Many Hamburg writers work on a high level and are good and clean style writers. People say that we work very precise. Maybe it’s due to the clean style of graffiti we were confronted with before we moved more toward fine arts.

I read that you are interested in comics. What were some of your favorites when you were growing up?
We used to like very much Calvin and Hobbes and Spawn with drawings from Todd McFarlane and Ashley Wood. There used to be a comic store called Comic Cave in Hamubrg where it was exactly like the name implies. There we spent a lot of time. Then comics became less important for us as we began to concentrate more on graffiti. Nowadays we hardly read any comics. 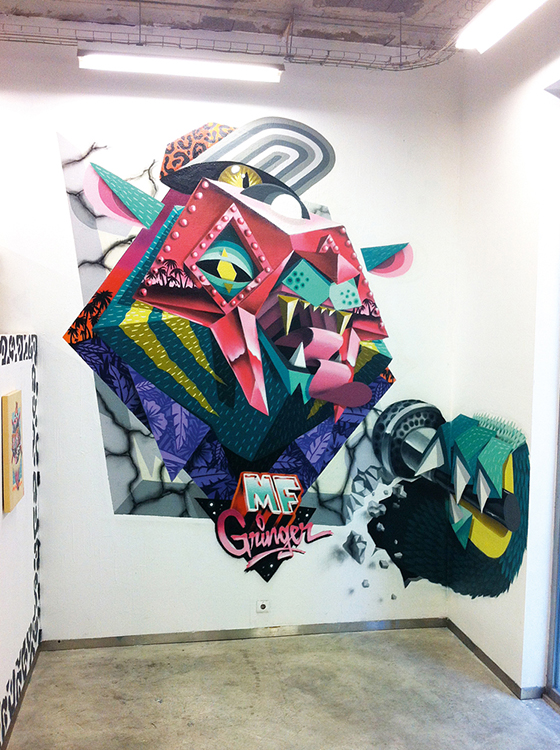 How did you develop your style? Did you go to art school or were you self-taught?
We think both. We were self-taught graffiti writers and learned there how to develop our own techniques and create our own styles. But we also went to art school where we dealt with various artistic genres that go further than the clearly defined field of graffiti. Just a very small example: We started to leave out the outlines in graffiti pieces and created our own approach and a different style. But we think we also owe some of our influences to art school. 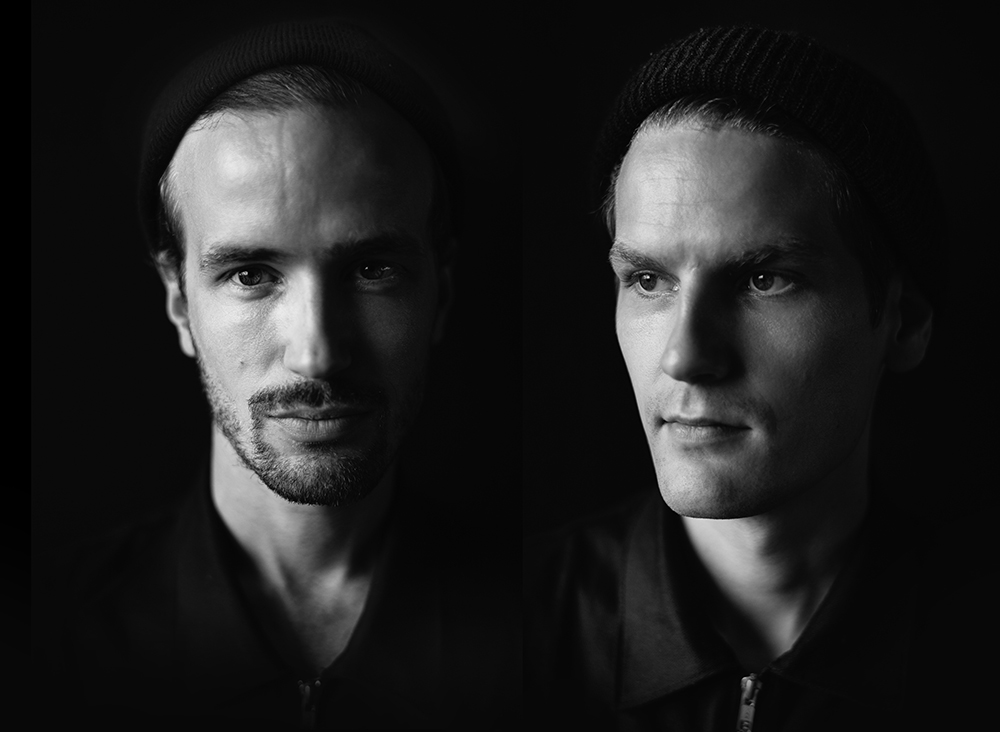 What do you love most about Berlin? Where are some of your favorite places there?
We really love the network of international artists based in Berlin. Here we find a high fluctuation of people and influences and the freedom to experiment in many ways. Berlin is a place steeped in history but also changing very fast. Maybe it is the only really cosmopolitan city in Germany and thus full of contrasts. There is always a lot to discover in this place.

Berlin is, especially in the summertime, a place with a vivid and social outdoor living. You just need to step out of the house to experience something special, so maybe we can say the streets in summer are part of our favorite places. Of course, there are also great clubs and cultural institutions we really like. But we might point out three particular places that always feel like coming home.

Located in the heart of Berlin, Urban Spree is an artistic place focused on contemporary art and urban cultures. It does not only provide many of the most interesting events but also studios and ateliers for artists in residence. Many of our friends also hang around there so it’s like meeting our extended family when we are at Urban Spree.

BC Gallery is a gallery for contemporary and urban art located closely to Urban Spree. It features regularly solo and group exhibitions by internationally renowned contemporary artists.

And last but not least, our own studio space. 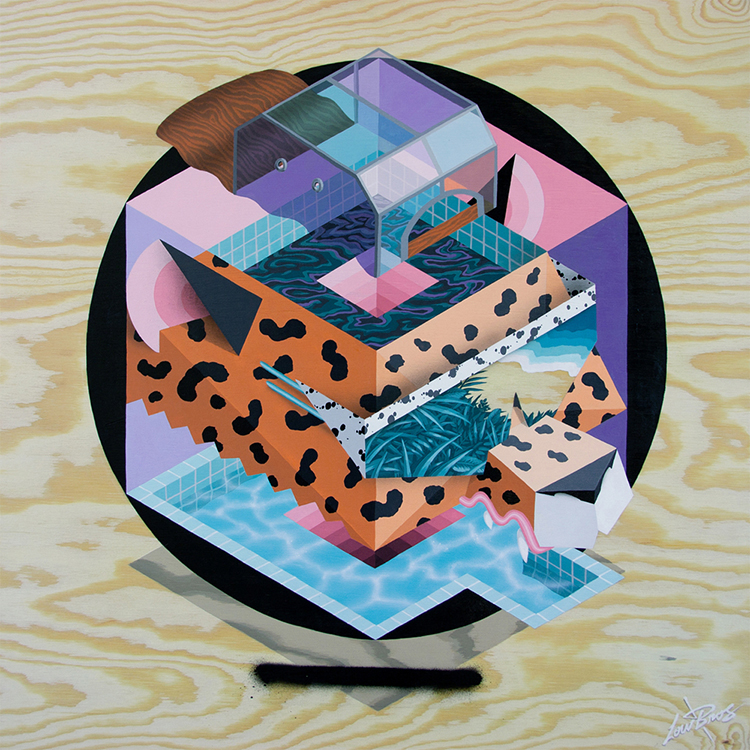 Your murals and paintings often consist of a cool crew of animals. Who are the animals in your murals? Are they based on people you know? Or just fantasy?
Our animal characters often represent certain stereotypes of a group of people we have met or observed. A character can also become representative of a whole subculture. But sometimes they can also be representative of a place. In some cases, we have portrayed people in a very reduced way to offer a projection surface where the viewer can interpret what he wants to see in it.

Who or what are your biggest inspirations?
Basically, it could be everything that surrounds us. But certainly, our common past from our childhood, pop culture, and places we have been to. Increasingly, everyday societal issues of a large city find their way into our work. 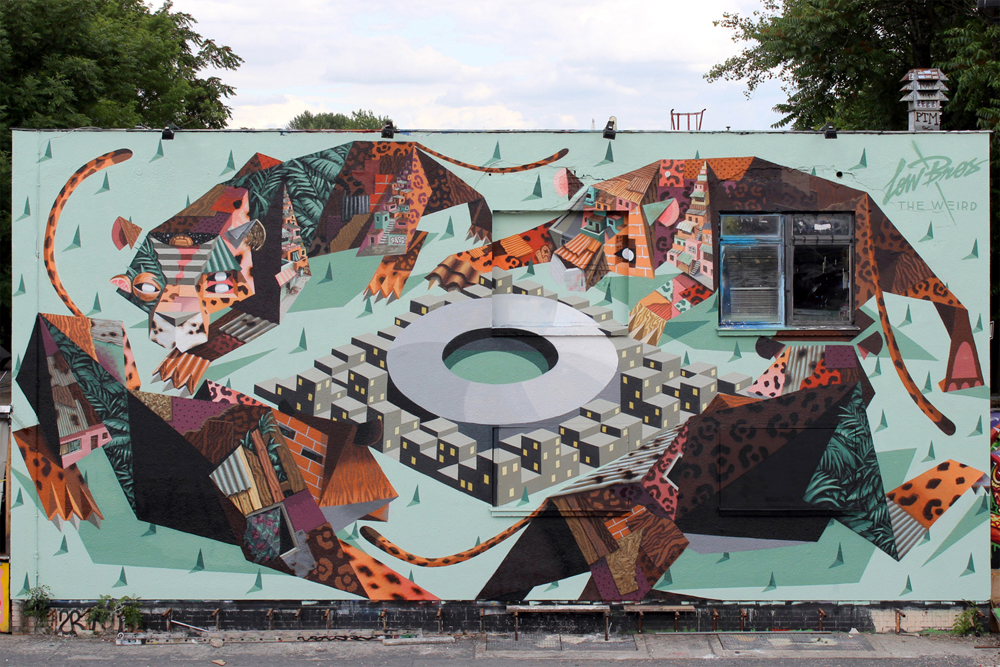 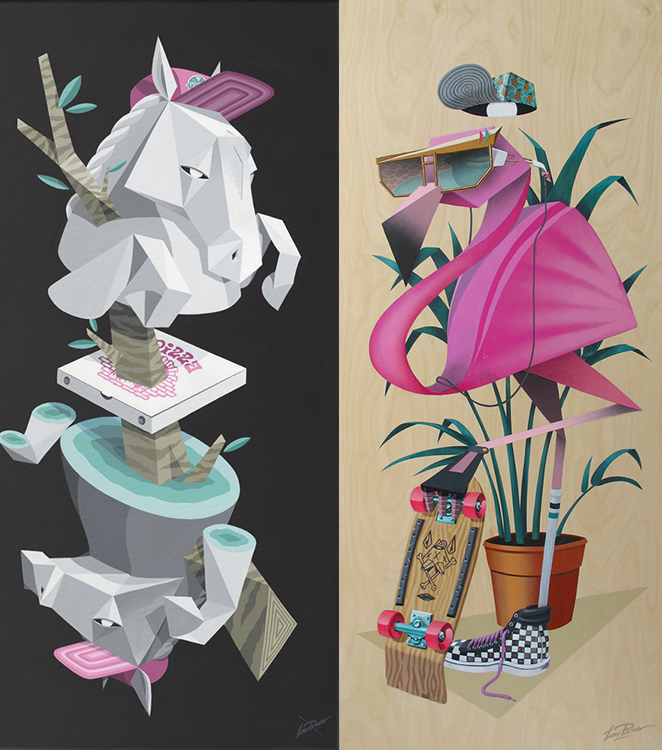 I grew up in California in the 1990s, and I see both when I look at your work. Is this place and period of time an inspiration?
That’s right. Although we haven’t been there yet, California has always represented an ideal in pop culture and in the media. In Germany, we had some U.S. TV series in the 1990s, which took place in California, and of course West Coast hip-hop also had a great impact. But maybe the most influential California thing was skate culture. We used to skate and watch all those videos that showed the pulse of those times, like the ones from the Bones Brigade. Graffiti and skateboarding have a lot in common: It’s about reclaiming the streets, you have to bear up and find your own techniques and style.

This year in June, a dream will come true as we are going to have our first solo show in Los Angeles at Thinkspace Gallery. It’s a gallery dedicated to the new contemporary art scene and we are very excited about this. Come along if you happen to be in L.A. then! 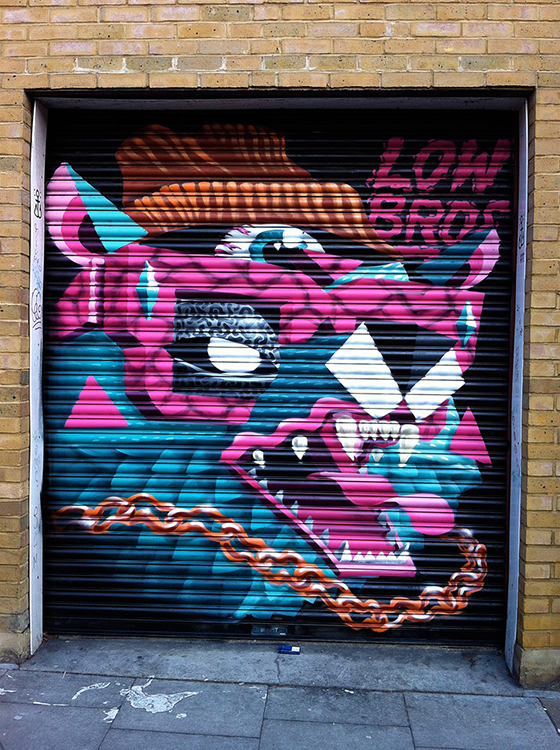 Where are some of your favorite cities to travel to and paint? Besides L.A., where haven’t you gone that you would like to go?
Normally, what characterizes most of our feelings toward a place are the people rather than the place itself. We’ve had awesome experiences in Bangkok, Lisbon, and Atlanta. The Living Walls Crew from Atlanta are amazing and admirable guys. Portland is a place we would like to know better and we would like to go to Mexico City. And we receive very positive feedbacks from Mexico so someday we would like to go there. We haven’t been to Paris to paint yet, but it would be nice to paint with our French friends there. The same can be said for New York.

When you are painting, do you do things equally? Or, for example, is one person usually responsible for the design and the other for the execution?
Normally we both do everything equally. It’s only in details we sometimes have preferences. One of us is more into typeface and the other is more into crafting. 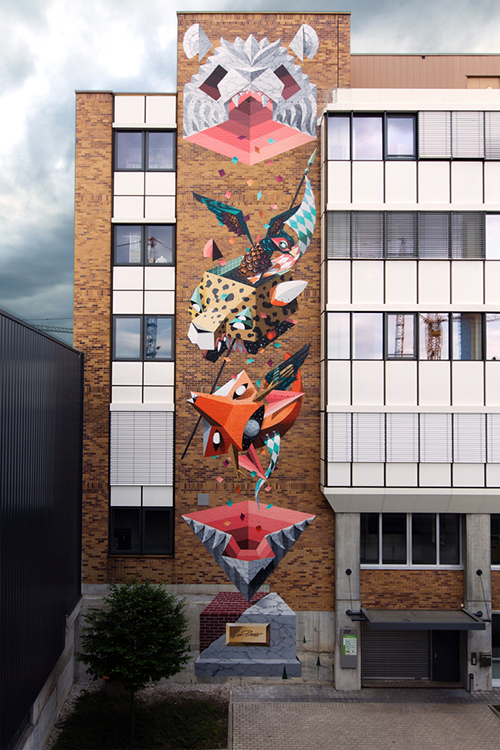 What projects from your past are you most proud of and why?
The “Maracaná Mural” we did in Berlin last year during the Soccer World Cup is one of our favorites for the simultaneity of the aesthetics paired with our message at the right moment.

In 2013, we made an installation in Lithuania with Clemens Behr, a very talented artist also from Berlin. It was a very nice experience working with somebody that approaches his art in a totally different way. It felt a bit like a musical jam session where different rhythms and tunes make a unique and new whole.

Our exhibition “Menace Beach.” It consisted of two complex exhibitions where we worked with various mediums to create a complete whole world. Apart from murals and canvases we worked with skateboards, garments, built installations and a skateboard ramp and made a movie. We had a great team that worked with us, like the film guys from Editude Pictures and Tobias Wüstefeld, an amazing media-designer specialized in 3D animations. 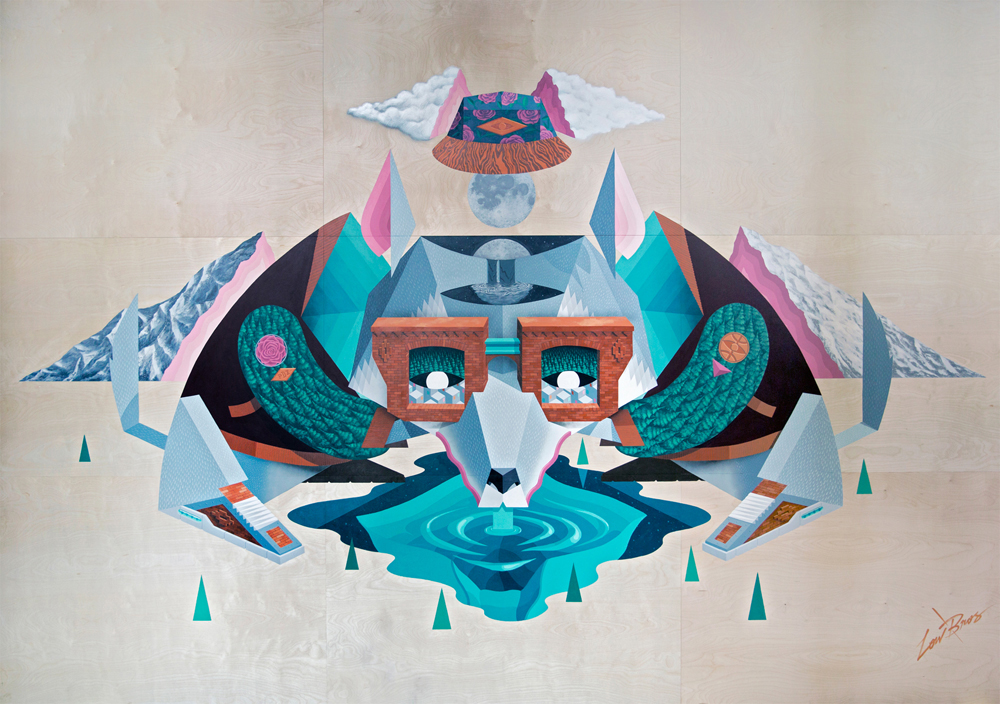 What are your goals for 2015?
In 2014, we had been very busy setting up an interdisciplinary studio for art and design called ON&ON in Berlin. It’s a very important field for us besides our work as artists. But therefore, we haven’t had the time to release our website. It is almost done now, so that’s our next goal and hopefully we can present it very soon. This year we will also begin the preparations for a book about us. And of course, there are still some murals we want to paint. 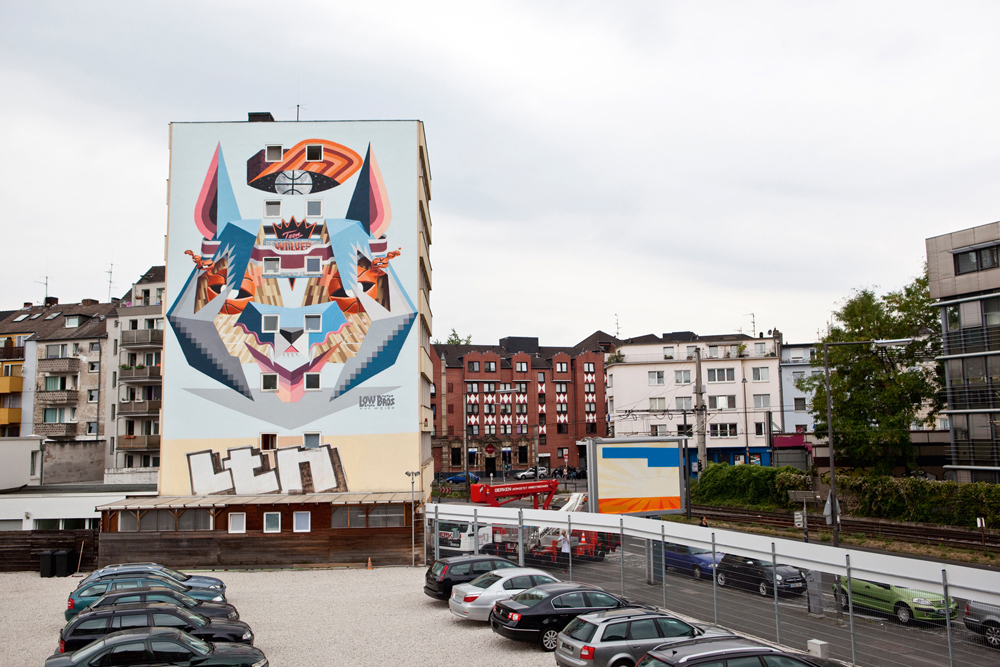 THE CURIOUS UNION OF DABSMYLA :: AN INTERVIEW

Senay Kenfe
In a underground world particularly noted for its individualism, its refreshing to see how cohesive the overall approach of Australian street artists Dabsmyla is when creating new pieces all around... WHAT HAPPENS WHEN STREET ART MEETS A TINY VILLAGE IN VANUATU

Callum Preston
Callum recounts the amazing story of him and Rone's visit to the Oceanian island nation of Vanuatu. They painted a mural for the village community, and experienced unforgettable kindness, gratitude...
HIDE COMMENTS