Punk will always go hand-in-hand with DIY. Fuck the man—let’s take this matter into our own hands and do it ourselves. We decide our destiny. That “punk ethic” has been effective from the ’70s to present day where it’s now expressed in different mediums, breaking social barriers. There are no rules. If there were, then we’d be part of the system.

This mentality is what drove Montreal artist, Lisa Czech, to express herself through her unique illustrations and comics. Punk gave her a blank canvas, of which she decided to explore themes of anger management and what she calls “the petty preoccupations in the punk scene and of the online world.”

Lisa’s been attending punk gigs since the age of 11 and is inspired in large part by playing voyeur: “I love looking at what people are wearing, how they’re interacting. The punk scene, it’s a smaller slice of the broader picture. It was also the first place where I started to meet people who built their lives around doing what they love. Even if that meant getting by with very little, it seemed more appealing to me than dredging my life away.”

Her illustrative work tackles the subjects of nuanced feminism, anger, everyday weirdness, and inner demons. But it was Lisa’s poster art that really caught my eye, since they’re not your typical “band” flyer. Her opinion, ideas, and aesthetic comes first, then the band’s name and show dates—never the other way around. Now that is punk. 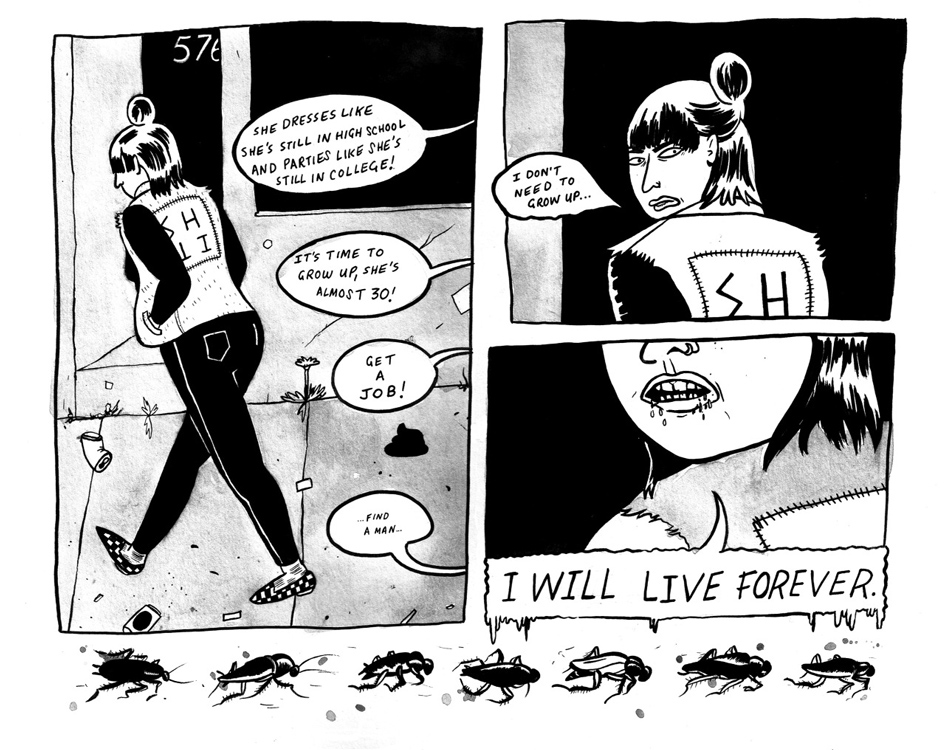 JOHNNY F. KIM: What triggered you at the age of 16 to start doing illustrations?
LISA CZECH: I’ve been drawing my whole life. Except for a brief period of super-realistic pencil drawings of eyes as a teen, it was always comic and cartoon characters. I went into the Illustration & Design program at Dawson College and finally was able to put a name to what I had been doing this whole time.

“[The punk scene] was also the first place where I started to meet people who built their lives around doing what they love.”

The punk scene seems to be very close to you, how does your art translate to that?
I’ve been going to punk gigs since I was 11. I always liked going to shows and seeing the bands, and also people-watching. I love looking at what people are wearing, how they’re interacting. The punk scene, it’s a smaller slice of the broader picture. It was also the first place where I started to meet people who built their lives around doing what they love. Even if that meant getting by with very little, it seemed more appealing to me than dredging my life away. 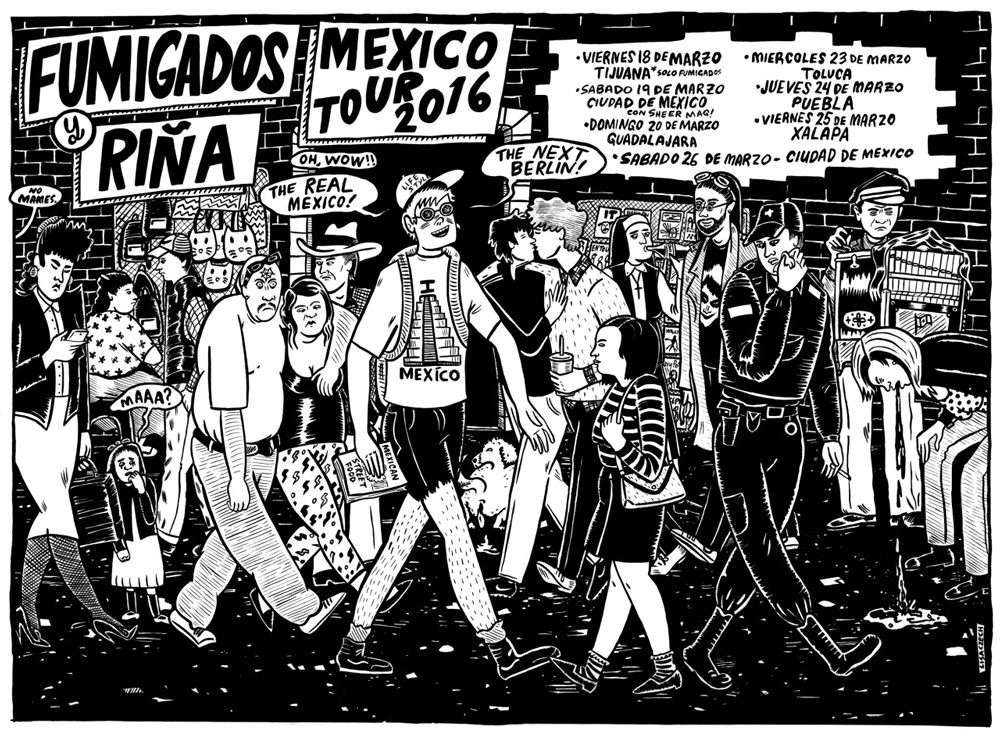 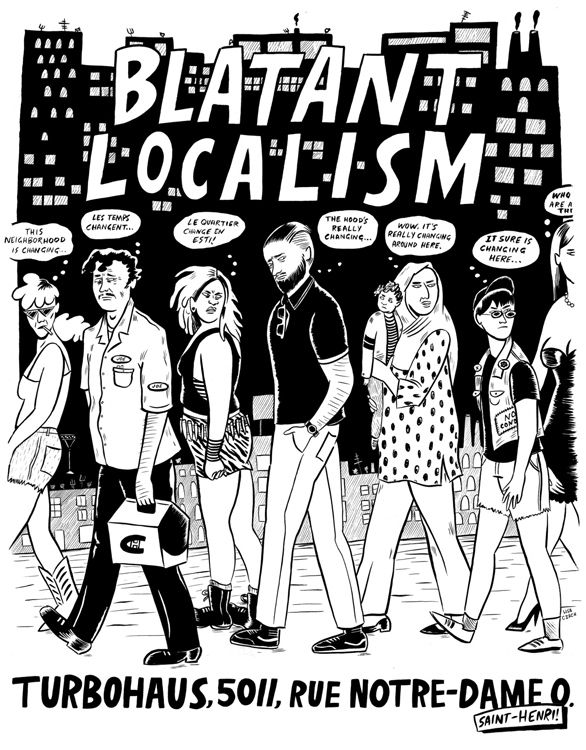 Can you tell us what your process is like when you start working on a poster for a show or a band? Since all of your work is hand drawn at first, how do you come up with the idea or concept? You don’t really showcase like a visual of the band—but more of a mood or a message.
Sometimes people have an idea or a thematic in mind and that can be fun to work with—if the concept is interesting! I like the challenge. The rest of the time, if someone asks me to do whatever I want, I let myself be guided by some element that jumps out at me, whether it be the music, the venue, the season, the city it’s taking place in. Sometimes it’s more illustrative, other times it’s like a one-panel comic. A gig poster is something ephemeral so I feel freer to try out different styles and ideas with them. I like to use gig posters to make statements because they’re not meant to be permanent, like a mural or something like that.

Is there a specific message you convey for each illustration you do?
It depends what the illustration is for, I guess! Generally, in most things I do, I try to convey the message that 1. Women’s lives are important, and 2. We’re all a little mutant and monstrous sometimes. I hope I convey a nuanced point of view, as things are not usually ever just black and white.

In your own words, how would you describe your own work?
Mostly black and white, graphic, kind of looks like [The] Archies if they were dirty and depressed. Lots of tough-looking ladies. 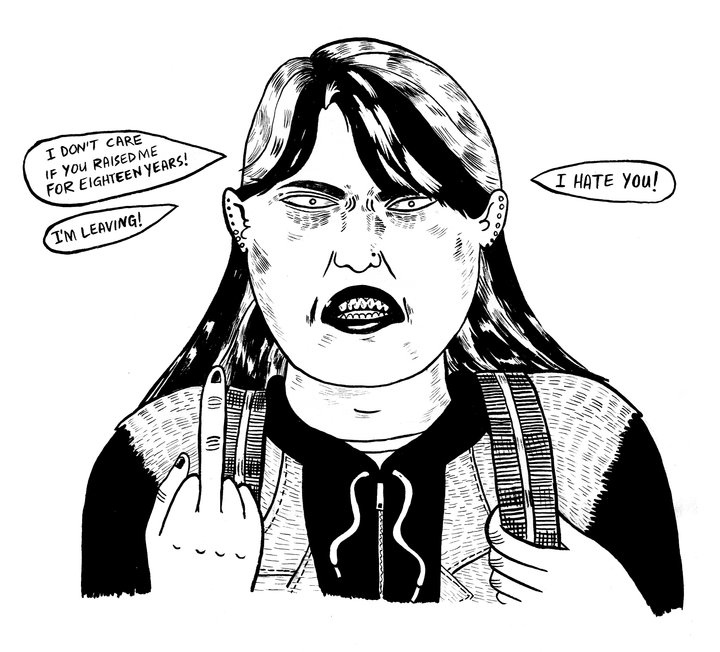 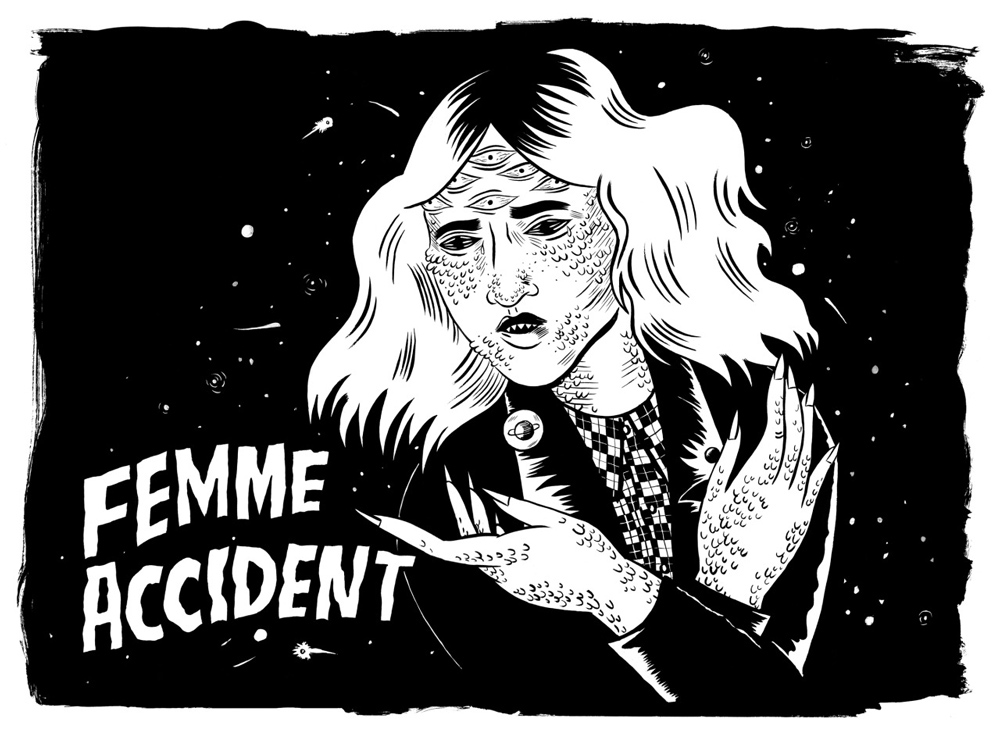 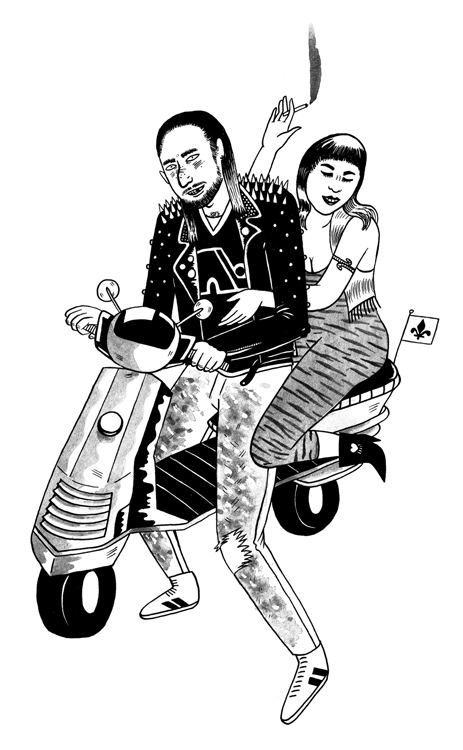 Your work has touches of old punk posters/flyers like Black Flag. Where do you get your inspiration from? Or who are some artists that inspire you?
Generally, my main inspirations are walking around on the street or going out at night and looking at people and the funny way they do things. As a kid, I was really into Sailor Moon and Lisa Frank. As far as cartoonists that have inspired me, I have been really inspired by the likes of Debbie Drechsler, Julie Doucet, the Hernandez Brothers, Robert Crumb—but I don’t keep very up-to-date with that world because I find it to be all too often really vacantly sexist or too chummy for me. I spend a lot more time looking at neoclassical painting and the Romantics because I love the poses and the drama in them, and also Japanese illustrators like Nakahara Jun’ichi.

“Generally, my main inspirations are walking around on the street or going out at night and looking at people and the funny way they do things.”

How much do you think artists like Raymond Pettibon helped shape the punk scene as well as the art that comes with it?
In order for a community like a punk scene to work, people NEED to work for free, or at least, go into it without expecting to get paid. This goes for visual artists supporting that community as well. However, I think that the contribution of artists within music is often undervalued, monetarily. Bands can sell records and merch to try not to lose out and hopefully make a bit of cash, but that extra cash usually goes to buying rounds at the bar or studded belts instead of going to the person who designed the T-shirt or the tour poster or whatever. And it’s not all about money, but it’s really fucking rough trying to make your living by making art AND finding time to do the ‘punk’ thing and help out but not ask for anything in return. 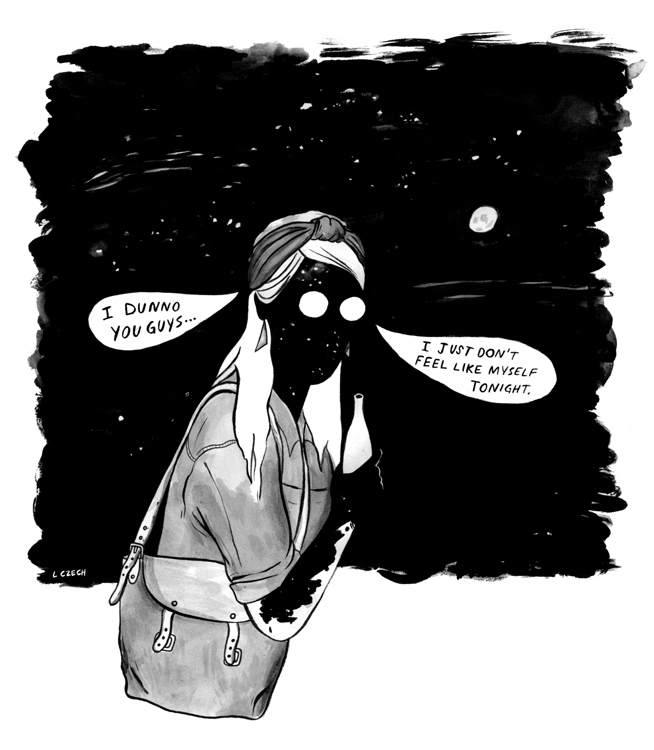 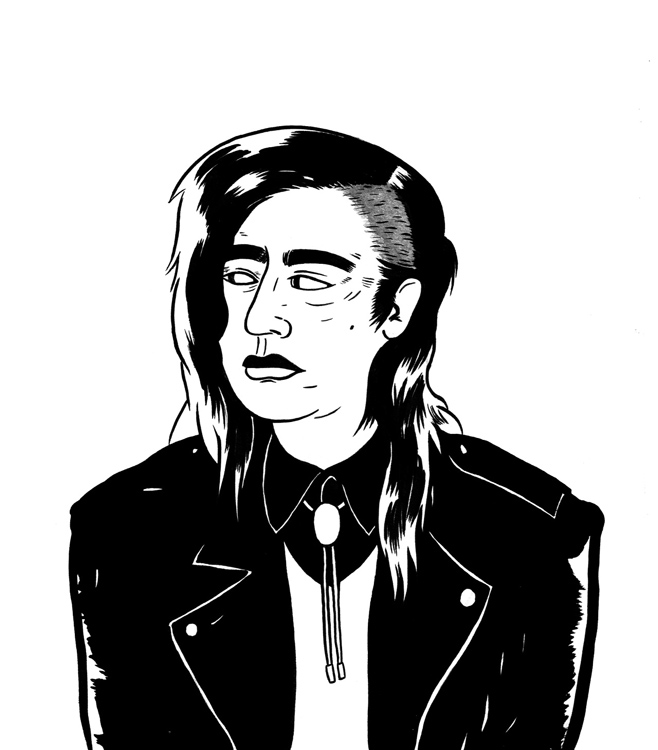 Tell us about your comics. What are they about?
Anger management. The petty preoccupations in the punk scene and of the online world. Street harassment. The absurdity of our desires and hang-ups. I have a loose, ongoing story that I am working on about a frumpy punk named Vicky and her circle of friends. All of these I put out in a zine called “Punk Village.”

You are originally from Montreal but now live in Mexico City. Why did you make the move and is there anything you miss about Montreal?
I moved to Mexico City because I really love this city and I find Canada really boring. I miss my family and friends back home, and I miss having access to a body of water to chill next to, even if it’s just a sludgy canal or river. I miss being able to drink water from the tap, and certain foods that I can’t get here, but that’s about it. 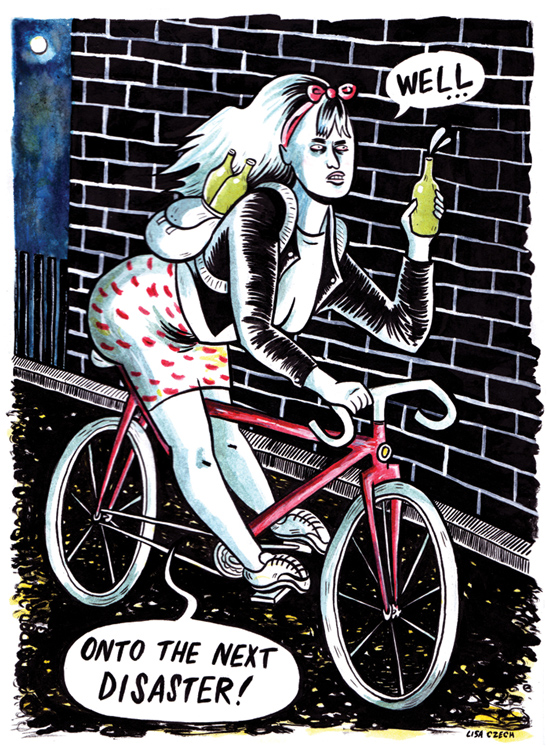 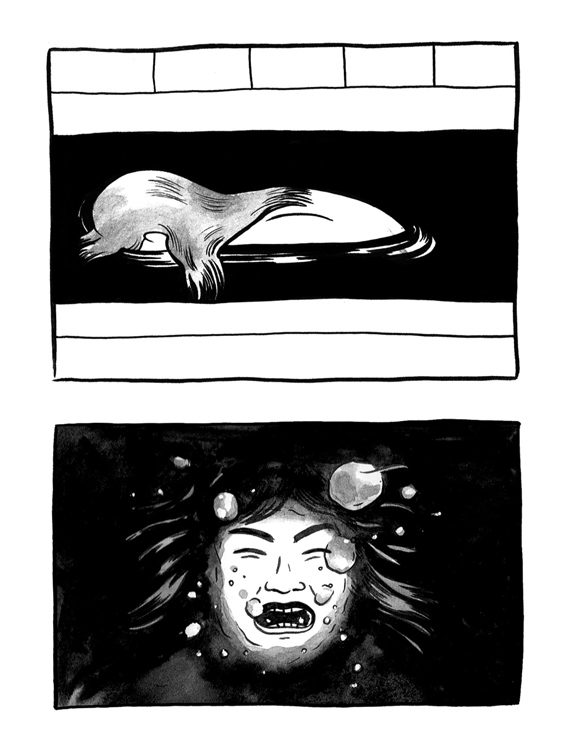 I know that you play guitar for the band Dead Wife. Would you mind talking about it?
Dead Wife is the band that won’t die. We play maybe once or twice a year now for the past 3 years. Everybody hates us and we’ve never fit into any specific punk scene. Almost every written review we’ve ever gotten has been pretty terrible, saying stuff like it sounds like we use Peavey practice amps or play drums on a tin can. We’re fine with that. You can listen to everything here.

Any upcoming work or exhibits?
Hopefully I will be showing some drawings in Montreal and Toronto this coming summer, but that’s still being organized. I have a comic in the upcoming comics anthology “Frosh Week,” put out by Sucker Press. Punk Village 3 and 4 will be out this summer also. I will keep all of this up to date on my website. 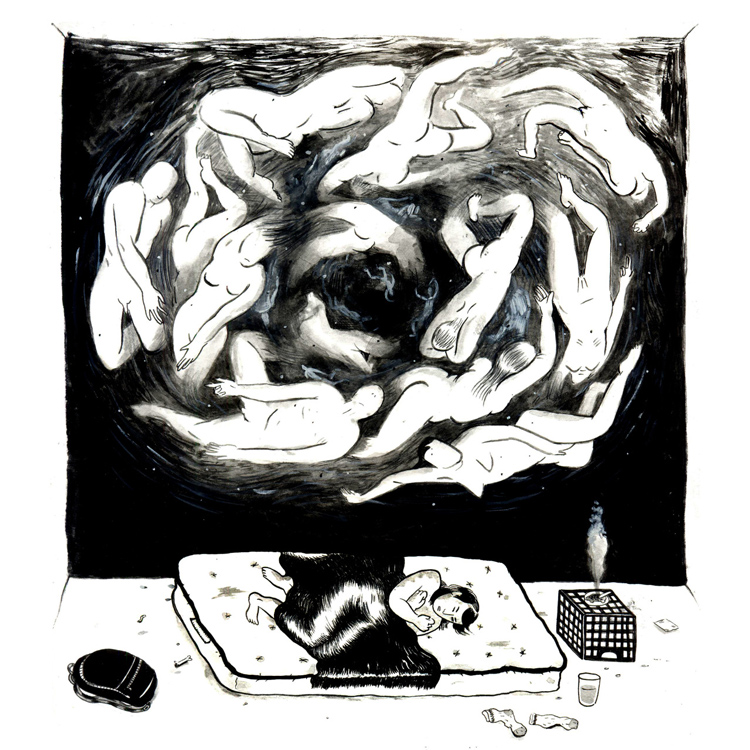 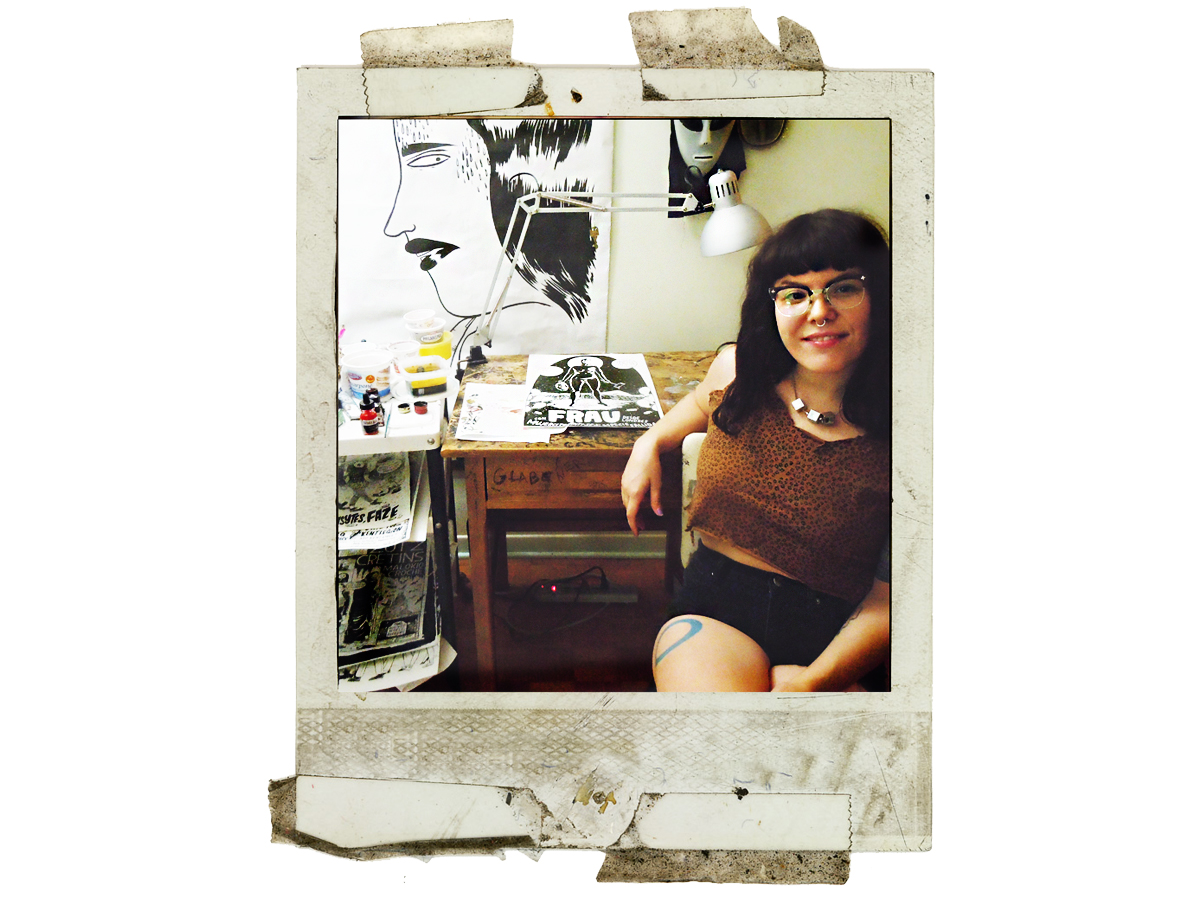 Keep up with Lisa at lisaczechofficial.com.