More Than Just a Design Choice :: A Brief History of Tigerstripe Camo

Counterculture is a big part of streetwear, and that may be why its stalwarts flock to camouflage. Let’s face it, you’re not hiding from shit when you’re dipped head-to-toe in MARPAT while shopping at Target, but the print definitely makes a statement. And tigerstripe is one of the most eye-catching.

Tigerstripe is often credited to the Vietnamese, but its origins are pretty murky. The pattern is a nod to the French ‘lizard’ pattern known as tenue du leopard (notice how the detailing on the black can be mistaken for lizard tails?). The Republic of Vietnam Marine Corps made a small update to the print as a response to the jungle foliage and searing balmy heat, with bold black stripes falling over traces of green and brown. The colors were chosen to match the bamboo-littered terrain, and the distinctive brush-strokes represented the tall thickets that would sway with the East Indian Wind. The print was so effective that Korea, Japan, and Thailand adopted the design with couple of changes to the hue.

The tigerstripe pattern really gained notoriety when it was unofficially adopted by the U.S. Armed forces during the Vietnam conflict (it is politically incorrect to call killing hundreds of thousands of Vietnamese on their own soil “war,” especially when you lose). Many of the young men bypassed the standard woodland camouflage in favor of the tigerstripe, and USMAAG advisors were authorized to wear their Vietnamese unit’s combat uniform. Because of this, many of the uniforms were made by local tailors; this is why there are so many variations upon the pattern.

While the blending of blobs in the woodland camouflage design worked well with thick forests, the tigerstripe was keen on disguising a corpsman in the jungle, thanks to the fraying brushstroke details on black. The camouflage was highly effective and is still used by U.S. Special Operations Forces that operate in areas like Afghanistan. 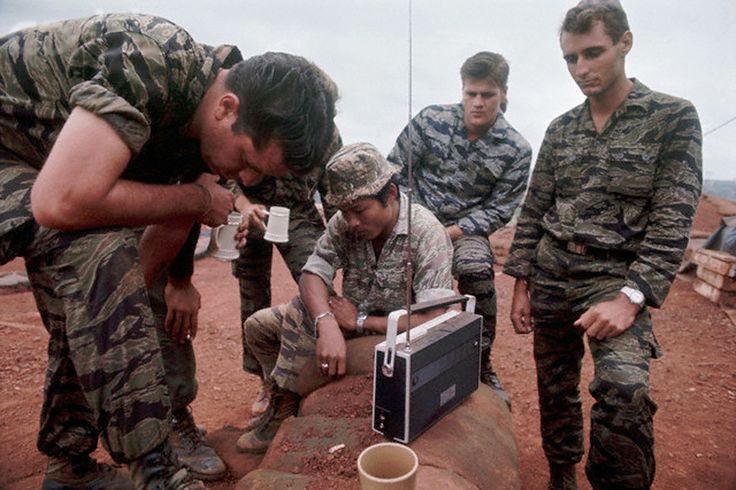 “Because of numerous contracts being fulfilled by various tailors and factories there are a huge number of varieties in Vietnam tigerstripe uniforms… as seen above.” –Flecktarn92

Tigerstripe made a real impact on modern society when the conflict with Vietnam finally came to a conclusion. During those years, it wasn’t uncommon for swaths of veterans to arrive home to a community of Americans in turmoil over the unpopular war. Widely publicized by the media, parades were replaced with rants, jeers, and shouting matches. Many veterans, feeling displaced in their own home, held on to the vestiges of their time in Vietnam, wearing their tigerstripe camo M-65 jacket or their tigerstripe boonie hat against the concrete buildings of a city and the wooden picket fences of suburbia.

The print stood out, but camouflage took on a different meaning. People were used to woodland camouflage, and while it was used in both World War I and World War II, it was also relegated to hunting gear you could pick up at a local outdoor retailer. This time around, when civilians saw veterans in tigerstripe, the distinct camouflage meant one thing: war. And not just any war—it represented a humiliating loss abroad. The print was foreign, and unsettling for the typical American. 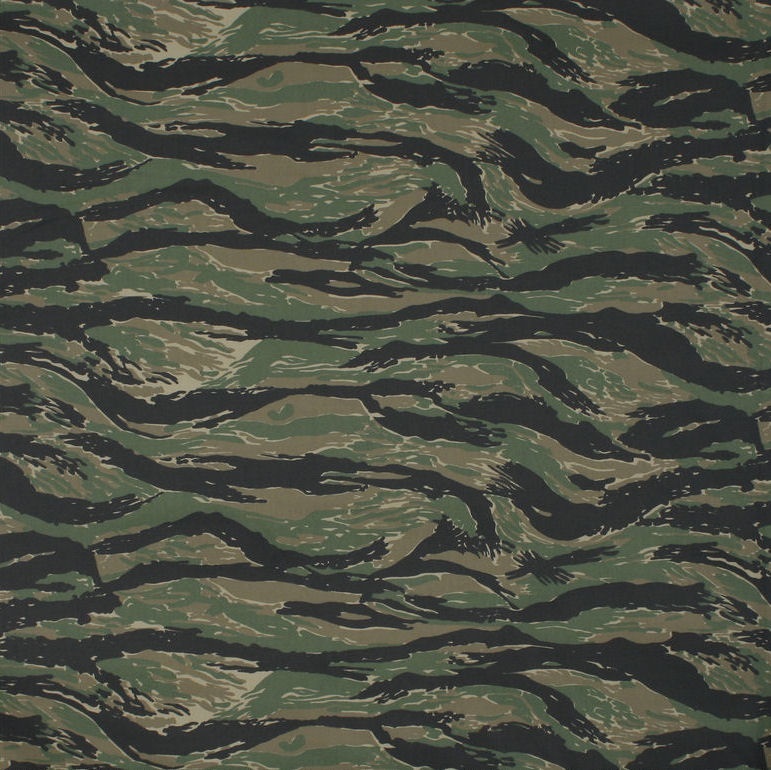 As America, and the world, was involved in less wars, the need for camouflage naturally diminished. New prints were developed, and the old prints such as woodland and tigerstripe camouflage were found in surplus stores or trickled down to thrift shops from veterans who donated their fatigues. Camouflage as a whole was adopted by counter culture, and it wasn’t vets in the M-65, but the burnout hessian with the really good weed.

Tigerstripe has since appeared on sneakers, shorts, shirts, jackets, backpacks, and nearly everything in the streetwear arsenal because of what it implies—it tells a story. It is a print that reminds some of loss, others of conflict, but most of all, of struggle. It communicates more than just a design choice.

So yeah, tigerstripe is a bit of a badass.

The Hundreds “Palm” tiger camo pack is our West Coast take on tigerstripe, featuring palm trees and The Hundreds insignia throughout. We brought this back from a few seasons ago because it was one of our best-selling camos. It’s also Bobby Hundreds’ favorite type of camo print. 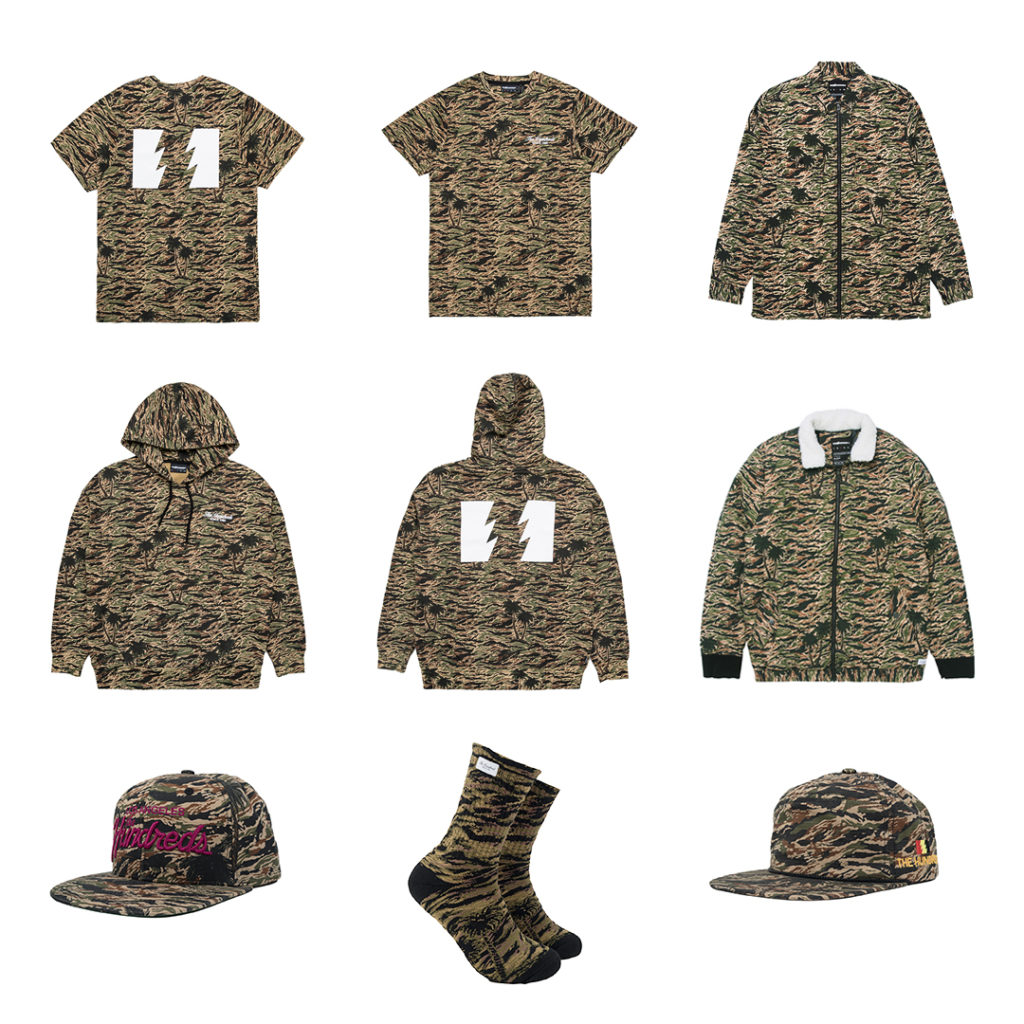 Peter Yeh
Quality in clothing has to start somewhere. For denim, it was with the sturdy metal rivets found in Levi’s, and for sportswear, it was Champion’s enduring Reverse Weave.
HIDE COMMENTS