In life, there’s something that happens when you dedicate yourself to something for a long time. Things that were new and surprising once become second nature—zen like—what Malcolm Gladwell likens to the ten thousand hour rule. Jeremy Jones has been in the forefront of backcountry snowboarding to the point were he’s, at times, foregone helicopters and hiked for days to get to a summit and descend its slopes. He’s a huge supporter of the environment—a true, off-the-beaten path snowboarder. I recently got the chance to sit and chat with him on a press trip for his collaboration with Swatch, to discuss what changes he’s seen in snowboarding, the direction it’s going, and what environmental effects have occurred due to climate change.

As a foreword to this interview, I’d like to add that we live in a world where there’s access to anything you’d want to “know” in your pocket. You can look up anything and vicariously live through that experience, but it’s not the experience in and of itself. And that—that feeling, the process—is what makes the experience. It’s rare that I get a chance to sit and talk to someone of Jeremy’s caliber. His understanding of snowboarding and his sense of presence in the environment show his dedication to his craft. I came away with an appreciation that can only come from total immersion in ones passion, path, and profession. 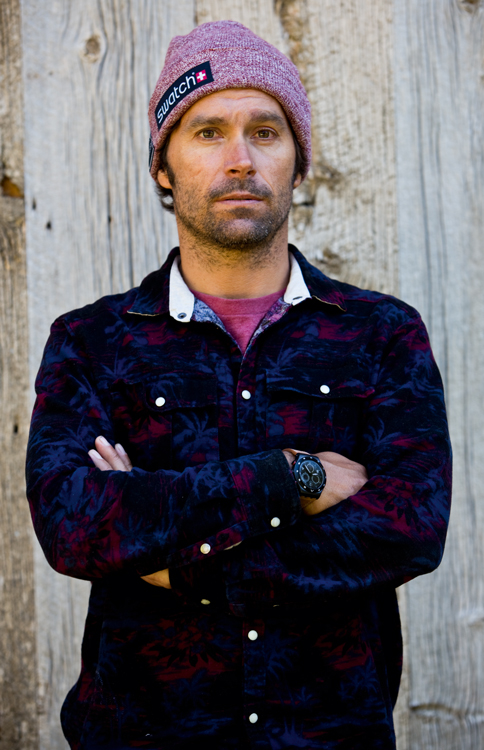 How did the collaboration with Swatch come about?
Swatch has had a really long history of supporting action sports and snowboard events. I mean, they were one of the early sponsors of snowboard events. It’s ebbed and flowed in their history and they were rekindling that. I ended up becoming an athlete with Swatch, and then I had some goals that I wanted to achieve in my snowboarding which led to me making my first film, Deeper. Swatch signed on for that. They were the first people to sign onto that. That ended up being a successful project which then led to Further and Higher, these three films over six years. Then, really along that way, I realized that there’s a book in there that I want to release that shows this beautiful imagery that the photographers captured, coupled with my words that I felt like were the real story of these. More so, we kind of fell short as movie makers to give the viewer that level of inside perspective on what I was doing in the mountains. That coincided with, “Let’s do the book and tie it to a watch and kind of commemorate this six year journey that we had did, and to bring something to the world that has some more depth than just a watch, and just a book.” I think that that was the root of it.

Deeper, Further, and Higher—that’s your personal mantra. It’s also etched on the side of the watch as well, right? What does this mean to you and why did you choose to include it on the watch?
Yeah, so I came up with, “Deeper, Further, and Higher”—I was at kind of a crossroads in my snowboarding and I was getting ready to divert from working with these film companies. I did forty-five films, all with chair lifts, snowmobiles, or helicopters, and I decided to go foot powered, but I had a lot of fear in doing that because I got paid off of starring in these big snowboard films. I kind of just wrote Deeper, Further, Higher down as a path that I was largely on in snowboarding and I felt like I had stalled out. Meaning, I was going to the same places over and over again. I had stopped that evolution with my snowboarding and as a person. I used that to kind of give me the confidence and as a barometer in my life that I had been following. [It] felt like I had stopped following that and needed to get back on track and really any one of these films could have been called Deeper, Further, or Higher. It’s just a way for me to not be stagnant and strive to find new ground as a person.

You’ve cut back on using heli and lifts. It reminds me of that saying, “It’s not so much the destination, but the journey that counts.” Do you feel like that’s where you are now?
Absolutely. I mean, one of my tag lines for Further was, “The journey is the reward.” You’ve got to love the process. If you don’t and your eye is on the final outcome, for one, in what I do with foot powered snowboarding, it’s so rare that all the pieces line up and we get to ride this movie worthy deal, but I’ve since evolved on that. Also, I believe that the act requires total focus and that focusing on the destination takes away precious focus on the act and can be very dangerous.

Where do you see snowboarding heading? Do you see it going more backcountry and exploring what you do, versus parks and resorts?
I do think we’ll continue to see some growth in backcountry snowboarding. It’s such a rich experience that you don’t need to go to the far edges of the world to experience it. I mean, I get a ton of satisfaction out of driving down the road to a spot that is very accessible. It’s not dangerous hiking up and snowboarding back down. I think that a lot of people are realizing that that is really enjoyable. It’s also highlighted my time at the resort. Meaning, I don’t go on those really crowded days, but just the seventy percent of my snowboarding is on a splitboard with a backpack on and hiking in the mountains. Then, to go at the resort and take a lift to the top with no backpack and play around is really exciting. I think we’ll see the back country growth, but I think we’re going to start seeing a continued growth in just all mountain snowboarding. Kind of turning that, doing resort laps—it’s kind of like street skating almost. I think the parks, what I’ve been really looking for, [are] coming. I could be wrong on this; we’re so stuck in this cheese wedge single dimension jumps and all the parks are the same. It’s like, let’s get a third dimension into there and turn them into these bowls.

Being the founder of Protect Our Winters and seeing that you’re on the forefront of nature, what changes have you seen in terms of global warming?
Unfortunately, I’ve seen significant changes. I think the people, in my job, have to be very in tune with nature. I notice every little texture of snow. I also see the differences, how mountains change year to year. It’s been significant. It’s the rate in change [that’s] really shocking, and I guess extreme weather events is one thing […] the shortening of winters, the speed in which these glaciers are shrinking. I mean, glaciers absolutely are always moving and it’s common for a glacier to retreat for a hundred years. What’s happening is the rate of retreat is at such an extreme level right now that it is shocking. Rain to the top, which again in my world, that leads to a compact snow pack which leads to higher avalanche danger. I talked to these locals in Jackson Hole. Jackson Hole is this really cold area of Utah. We’ve had rain to the top of those mountains mid winter. That [has] maybe never happened. If it has happened, it hasn’t happened in forty, fifty, sixty. I mean, these old timers have never seen rain to the top. Now, it’s not that common to see rain to the top, so those things like that are just becoming more and more frequent unfortunately.

It’s kind of like the seasons have flopped in some sense.
I mean, it’s not flopped because one, we haven’t had a touch of snow, so for it to snow a little bit in June, and July, and September is something, but yeah, it’s just erratic stuff. We’re seeing in Alaska this snow path that traditionally we would only see in Colorado. We’re now seeing it on coastal Alaska, meaning they’re having these extreme cold cycles that create these crystals, that create bad avalanche danger, which have led to these deaths in Alaska that, in the past, have been largely unheard of.

Yeah, we don’t live as harmonious as we should with nature. It’s more about our conveniences than actually trying to live within the actual constraints of nature.
Right, but we are change. There’s exciting stuff going on… The work that we do at Protect Our Winters is for my kids kids.

It’s not un-doable.
Well, there’s a big different between runaway four degrees increase and two degrees increase. Right now, we’re fighting for a two degree increase in global temperature and that’s still totally achievable and this erraticness—that’s us. We’ll have to hopefully, at the very least, [adapt like], “Wow, we’ve got the biggest snow storm ever.” Or, “You know what, we don’t have this much snow this year. Time to go mountain biking.” There’s some positive stuff on the environmental front right now. More so in the eight years that I’ve been hyper focused on it I could ever say. Pete Pabon
Necessity is the mother of invention, and for ICNY‘s 23-year-old founder Michael Cherman, visibility was his necessity. After being struck by a car cycling home one night, Mike was left wondering, ... You're Going to Thank Me One Day :: NYC Photography Legend Ricky Powell Tells All

Pete Pabon
Pete Pabon catches up with one of NYC street photography's greatest legends, Ricky Powell, to get all the anecdotes on his unorthodox upcoming (a girl was playin' him), best photos, turning anger i...
HIDE COMMENTS