The last couple of weeks have been crazy. I traveled to NYC and LA in under 10 days to work on a production with Google. The mothership of all companies, Google! More on that soon – but, needless to say I was focused on being sharp for the job. I had (tentatively) planned a trip to NYC for the end of this month to check out some shows I wanted to see, Jeff Koons Retrospective at The Whitney and Carl Andre: Sculpture as Space at Dia Beacon. This job couldn’t have been better timing. I booked an extra day in NYC and made way to the controversial Koons show at The Whitney.

Jeff Koons. You know, the guy who banks millions of dollars making steel pool floaties? The artist who takes tacky everyday knick knacks, glorifies them, and calls them art?  That wealthy 59-year old who people can’t choose whether to love, or hate? On the topic of Jeff Koons, I can always preempt the haters. He may be the most-hated living artist, but I guess that comes along with creating the most valued pieces of art by any living artist, too.

The Balloon Dog sold at Christie’s for $58 million, becoming the most expensive artwork by a living artist sold at auction.

Just like me, you’re probably wondering what all the hype is. I’ve wondered that for years while also admiring his works with the same interest. I chose to like Koons after accepting to ignore the aesthetic and to admire the craftsmanship of his pieces. This exhibition took me through the many stages of his – so far – career. From readymade vacuums to grotesque porcelain sculptures, the retrospective gave insight into the evolution of Koons’ vision of taking iconic imagery and somehow making it his own.

Many find it to be distasteful and his work to seem depressing because of its poor taste in subject matter representing pop culture and consumerism, along with such high value associated to very kitsch (art word for tacky) pieces. Let’s start from the beginning.

It is said that Koons’ obsession for everyday objects comes from his upbringing with his father who owned a furniture store. Little Koons spent a lot of time in his father’s showroom surrounded by shiny objects used to accessorize lives. He takes the accessories of his memory (appliances, gifts, toys) and distorts their scale so much that they become ostentatious and fictitious objects. All of a sudden, your childhood memories of balloon animals and Dumbo become almost frightening and haunting figures. Hideous to some and genius to others, this huge gap of opinion is why I find the art world to be so interesting. I didn’t photograph everything at the exhibition, just my favorite pieces. Bear with me as I bring you along for a peek into The Whitney for their final show at their Upper East Side location before moving. This mind-blowing exhibition, with the help of curator Scott Rothkopf, took a total of 4 years to plan.

The first floor of the exhibition brings us into Koons’ readymade era, The New. A readymade is an art term for something that is alREADY MADE. The first guy to do this was a douchebag by the name of Marcel Duchamp. I call him a douche because he decided to name a toilet bowl as art, with the underlying message that anything can be art, even something you piss on. I love this douchebag. He broke the norm, he took something that already existed, something he did not make with his own hands, and called it art. Following Duchamp’s footsteps, in 1979, Koons did the same thing. He encased vacuum cleaners with fluorescent lights, paying homage to domestication by mummifying these objects in what feels like coffins for “the stuff” of the late 20th century. 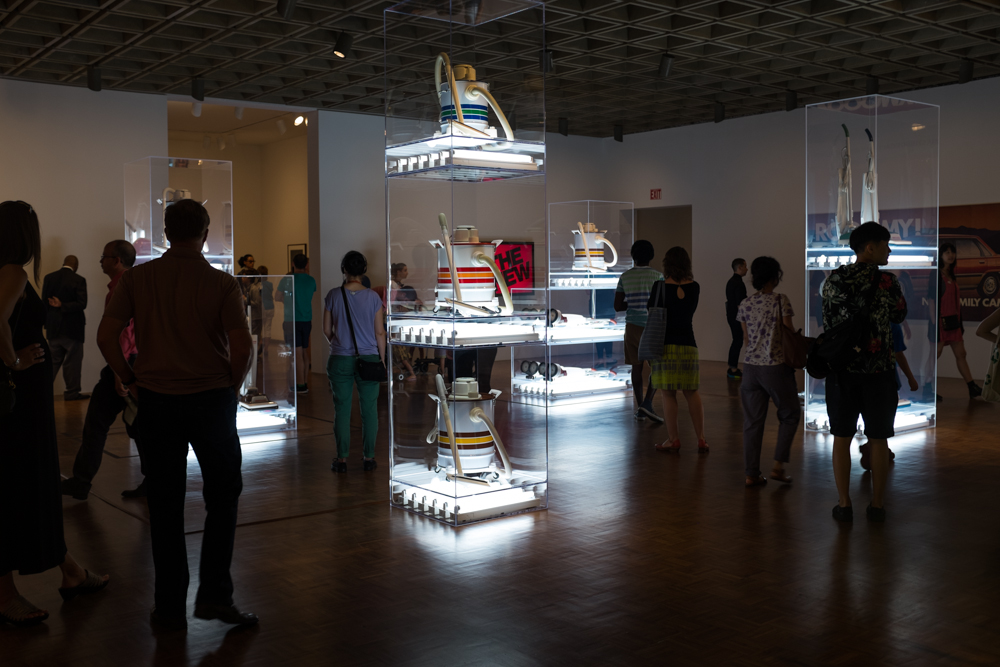 The “coffins” are surrounded by painted advertisements, which assist in celebrating consumerism in multiple forms, both painting and sculpture. 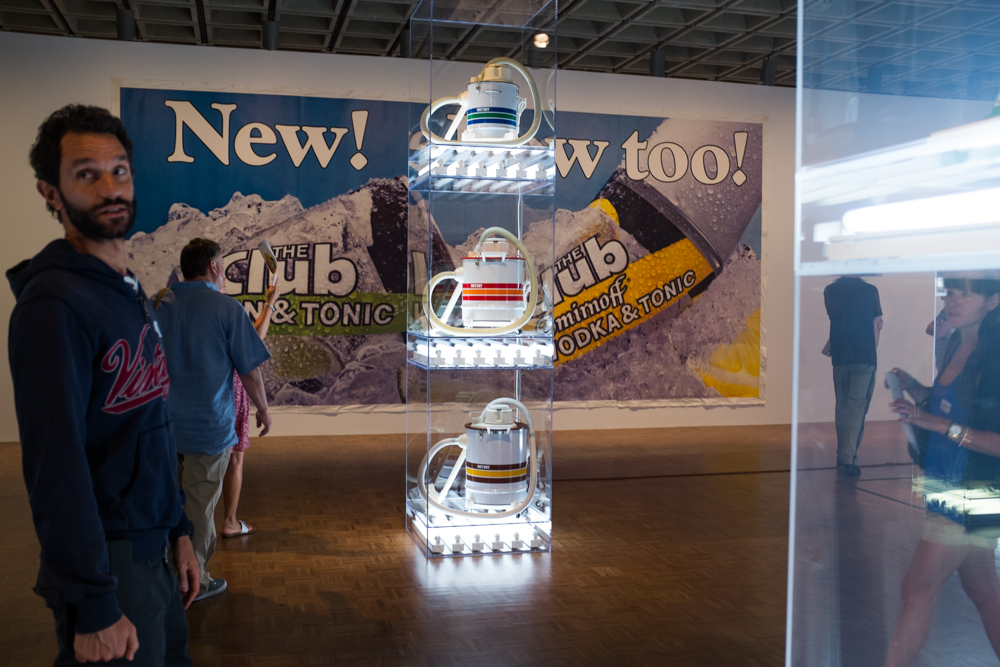 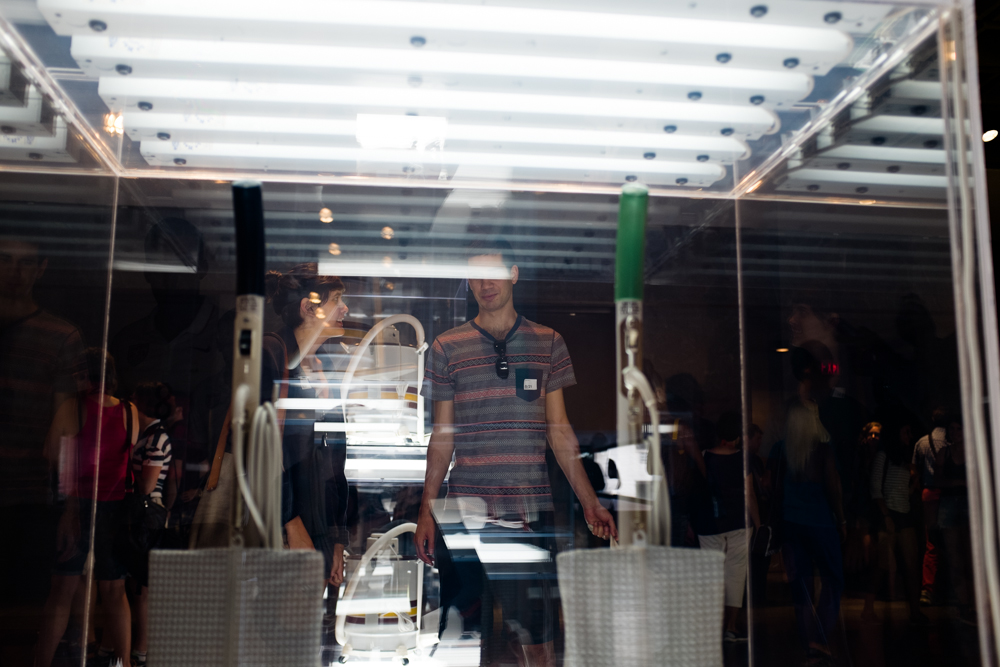 I imagine this guy asking “Babe, how is this art?”

He does the same thing with colorful blow-up inflatables. Objects that float are frequently found in his work, as inflated and hollow objects are gracious in their presence. This is a theme that is recurrent in his work over many decades. He states, “I’ve always liked inflatables, they remind me of us.” Apparently, Koons hired a guy to find the exact same blow-up flowers for this exhibition, the original ones have since deflated..... 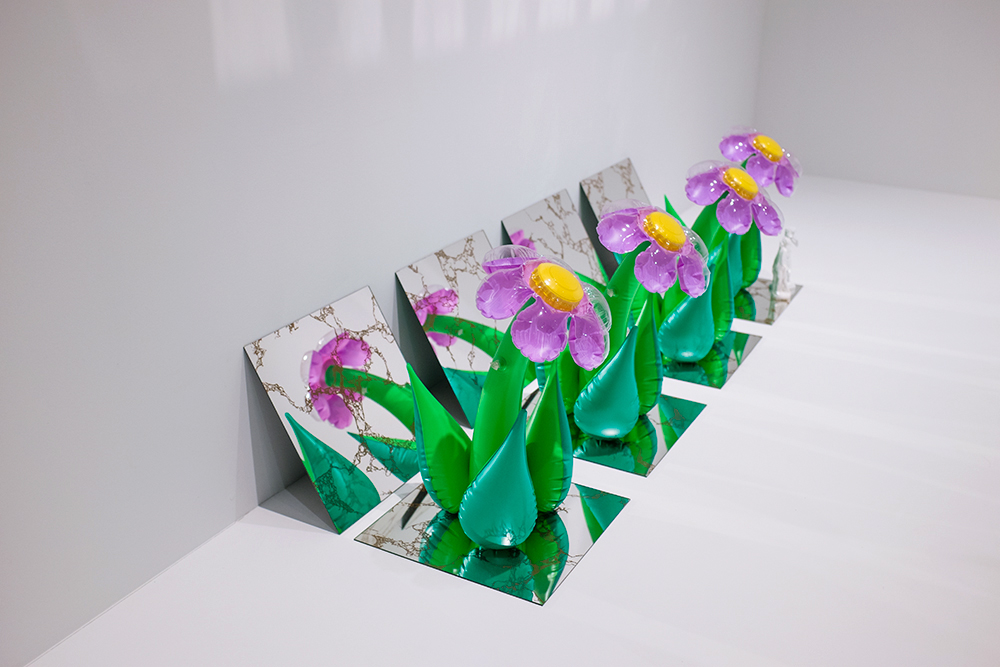 Speaking of floating, the next room is probably my second favorite. Equilibrium showcases the famous floating basketballs in glass cases, like magic! Koons refers to Equilibrium as “the penultimate state of being,” neither death nor life, but in a suspended state. Also found in the room are bronze pieces like lifeboats and a divers vest along with advertisements of famous basketball players, meant to represent the idea of lasting perfection. Eventually, the balls will completely sink to the bottom. Sort of depressing, right? 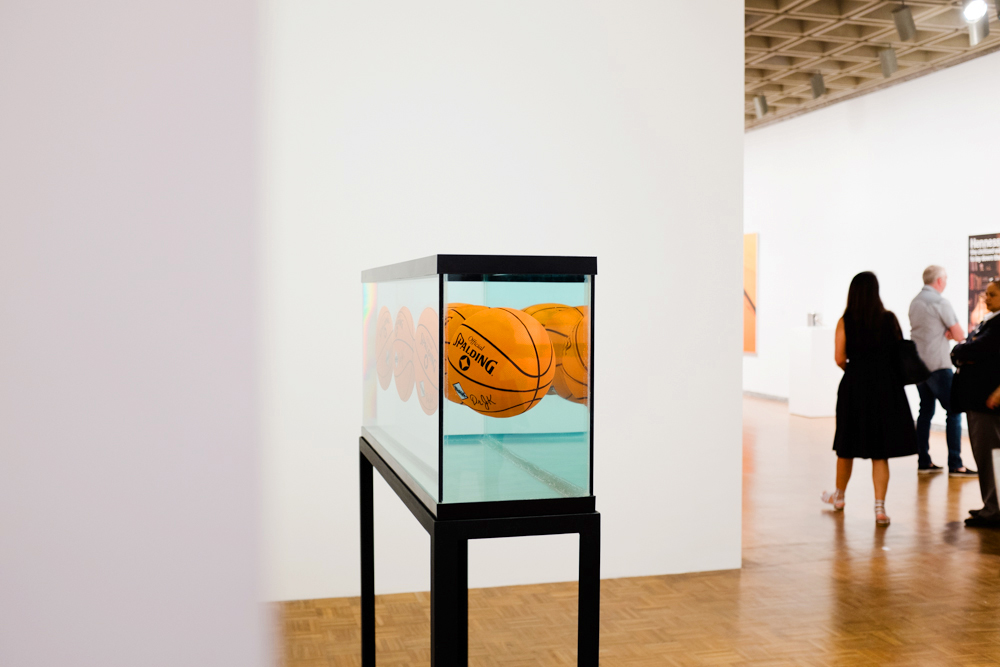 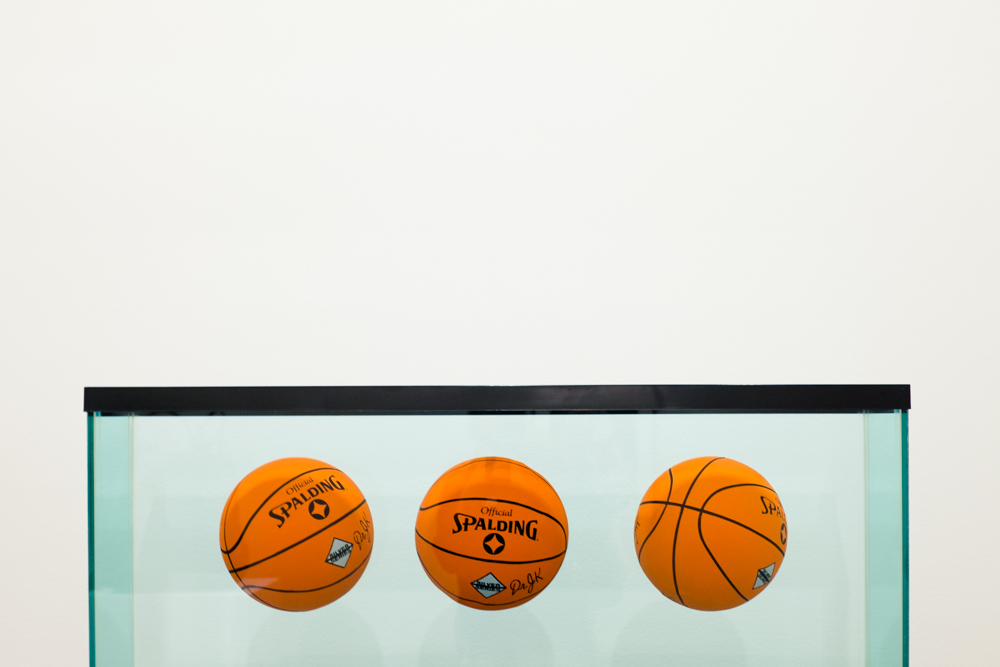 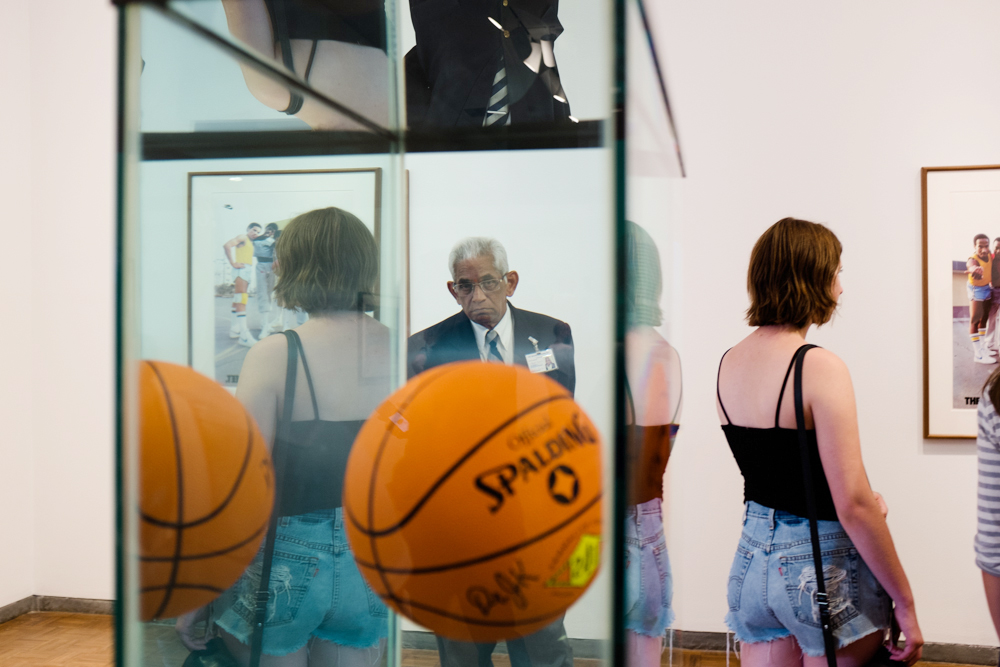 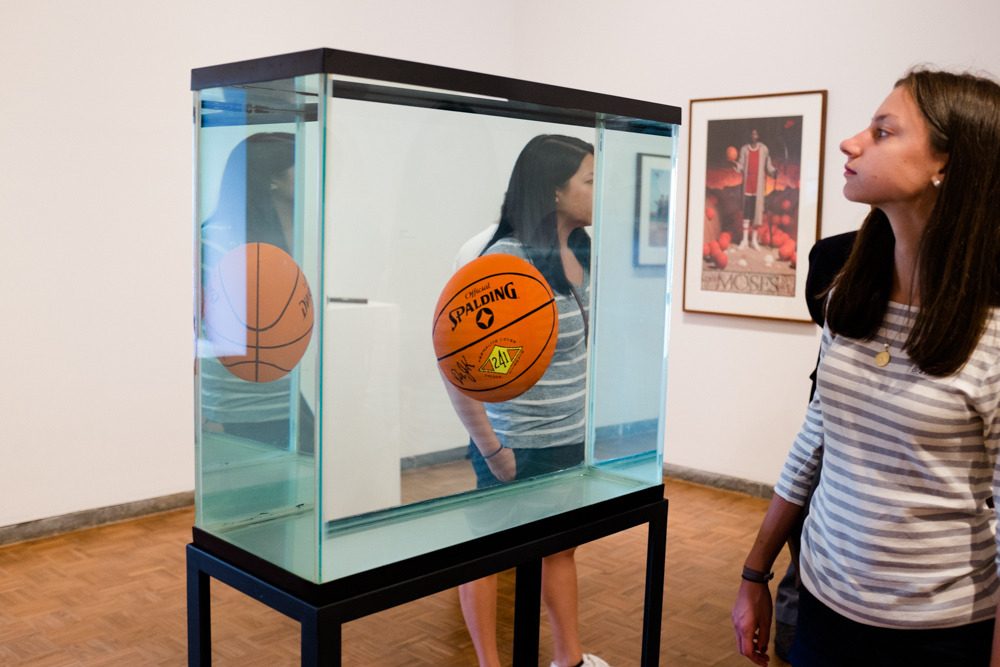 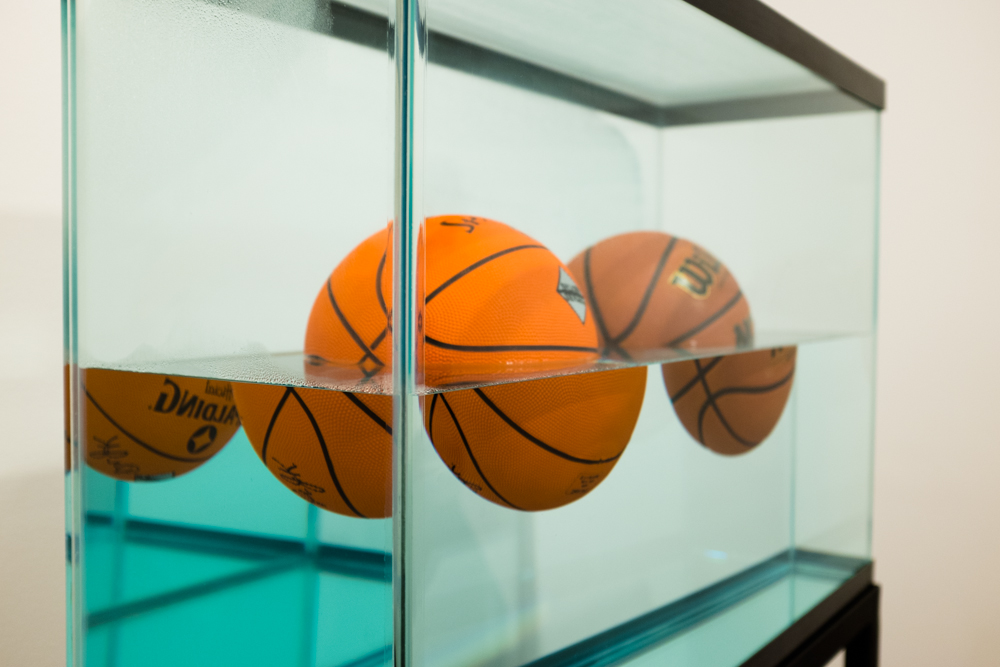 The next room and probably the most grotesque is Banality, a controversial series because of the usage of copyrighted images. Seeing all of these sculptures together had me feeling like I was in a weird antique store in the middle of America. 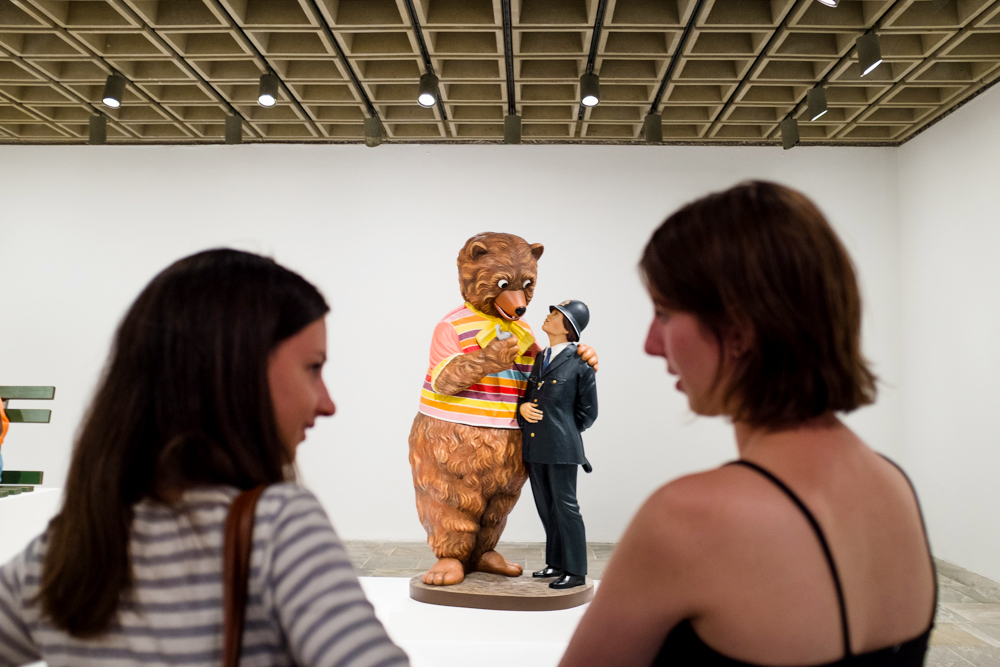 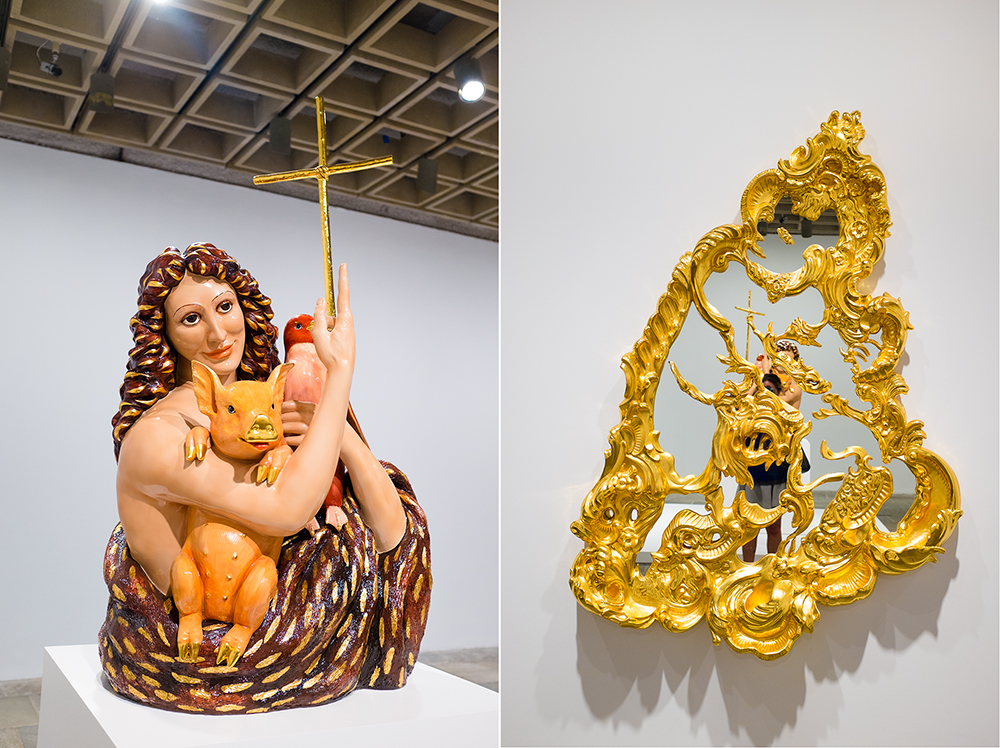 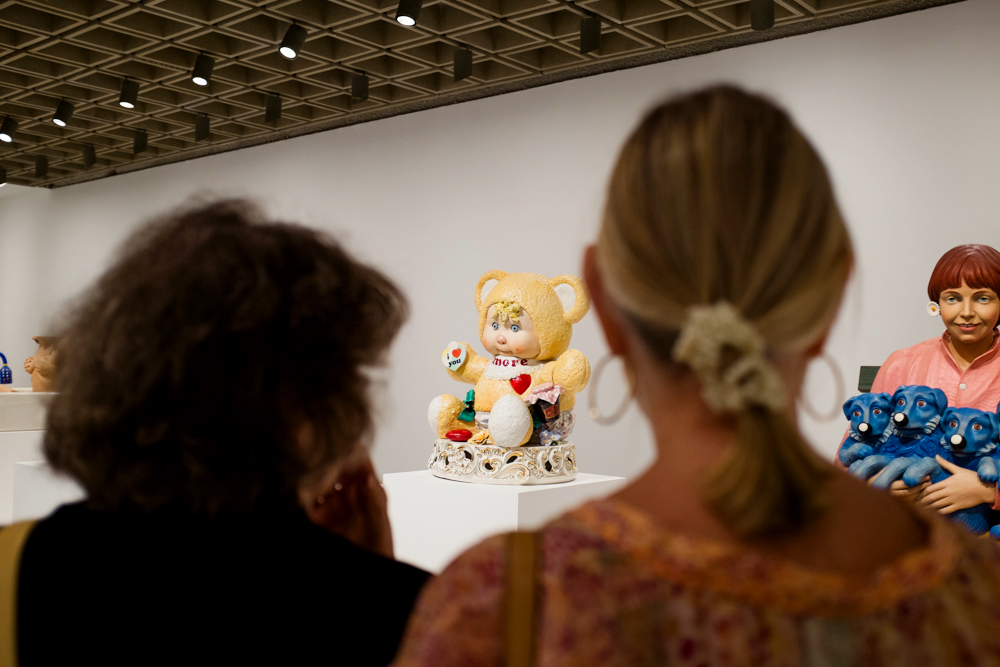 Fun fact: the Michael Jackson piece depicts him as a white man before his skin actually became fully white.

Moving on to a less bizarre series, each sculpture of Statuary depicts a different theme present of modern life in a contemporary world. Koons’ famed Rabbit portrays the theme of fantasy while hinting a sense of imaginative spirit. The viewer has the choice to imagine more than just a rabbit because of its shape and mirrored finish.

While another from the series, Louis XIV, represents authority. 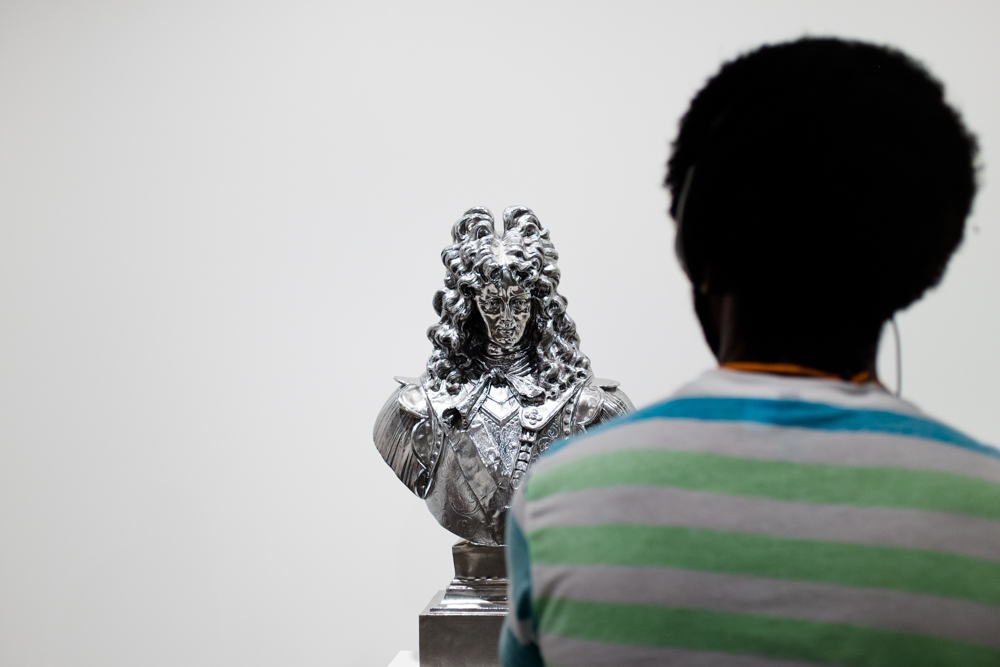 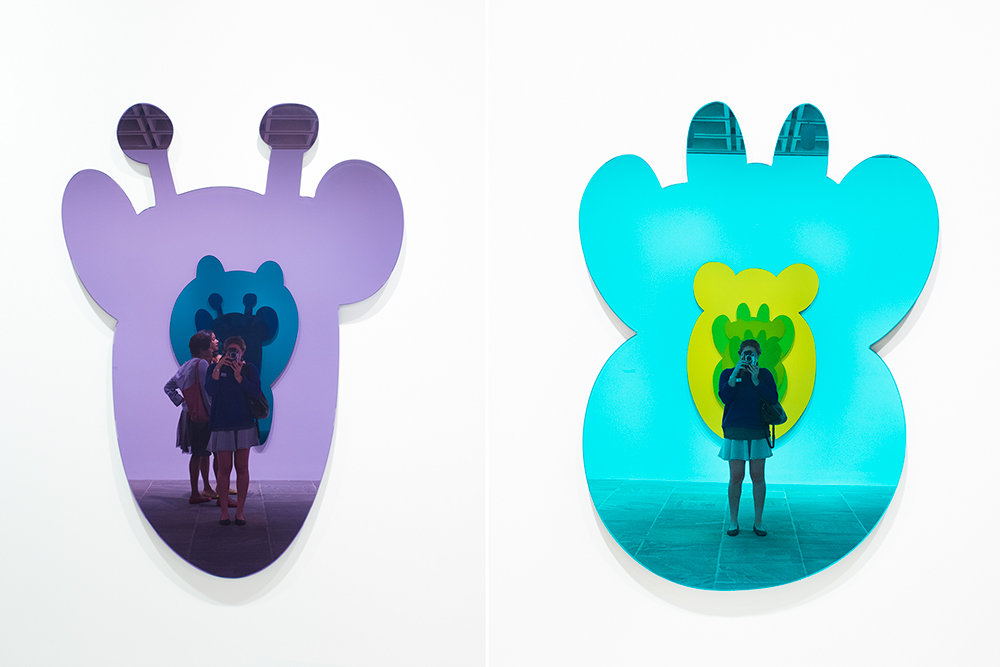 The last room I’ll share with you is Celebration, holding my favorite piece. A few months ago I read about a new Koons piece entitled Play-Doh, which apparently took him 20 years to make. From what I had seen, it was just a huge pile of what seemed to look like everyone’s favorite childhood toy (other than Lego), Play-Doh! Or colorful dinosaur poop? You can decide. If there is one Jeff Koons piece that I have to choose to love, this is the one. It’s so innocent, bright, and reminiscent of youth. I wanted to jump on it like it was some sort of ball pit or play place. I can’t even imagine how magical this must feel to see as a child. I thought there needs to be a disclaimer for all the baby art viewers: “Do not touch or eat Play-Doh, it is made of aluminum!“

Really though, can you believe this is aluminum?!

Perfectly curated in the Celebration room, Play-Doh is amongst other childlike-themed sculptures. It was at this moment, looking at all of these pieces together, that I found a huge connection between the work of Koons and the late artist, Mike Kelley, who also uses toys to create extensive sculptures.

All in all, I really enjoyed this exhibition. There’s a lot of assumption and judgement toward Jeff Koons, but isn’t that the same about every artist? It’s like saying you dislike Kanye West. You may be hating, but deep down you know every lyric to “Through the Wire.”