He came, he saw, he conquered. Hailing from Treasure Island to become the undisputed enforcer of SF’s then-legendary spot The Embarcadero in the late ’80s, pro skater James Kelch earned his nickname, “The Mayor,” the hard way. Know your history, check the stats, read the epic fight tales, learn a thing or two about the Wrap ‘Em Up technique he used to take care of shop lifters at FTC skateshop, and you’ll get a picture of why skateboarding sometimes laments about the thrill of its baggy-panted, Puma-clad salad days. Fun times.

Fast forward a couple decades and meet James Kelch 2.0: “I’m just taking care of the house, man, chilling with my girl and the cats and I just skate around and do whatever,” he laughs. From Cincinnati, where he moved back in 2001, Kelchmonster these days also runs his aptly-named Hella Cool Slateboard Club company.

Besides the epic street life tales, one thing that the former “Big Dirt” embodies is a certain way board graphics from these times were thought up: “Back then, companies were just good at making graphics that summed up a kid’s personality. It’s totally lost now, they’re just for whoever.” This quote alone sets the tone: if the words “Fuct,” “T-Dog,” or “White, hi-top Shell Toes” don’t ring a bell, you probably should go back to re-tweeting Lil Wayne’s latest “skateboarding” exploit. If they do, let The Mayor navigate through the five iconic favorite graphics of his that once adorned his pro-models, past and semi-present – an enchanting journey for kids of all ages, complete with airline companies’ knock-offs, drug deals gone wrong, and the mandatory Mark Gonzales cameo… 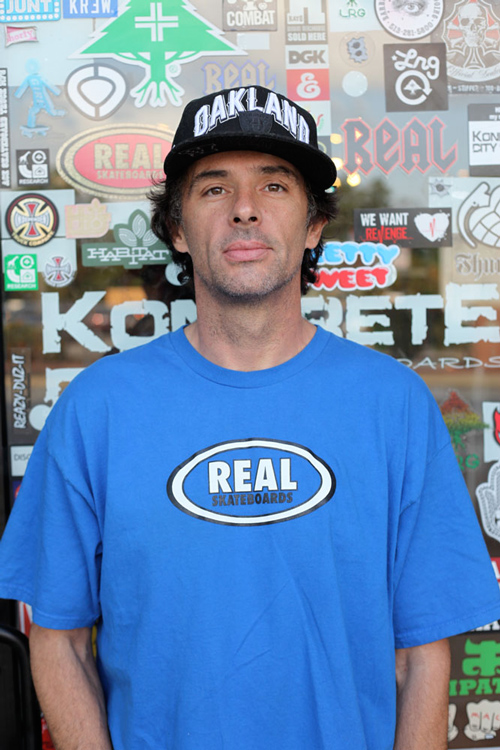 We always called this board “The Flyer” because of how it went down... So, at the end of 1992, Real told me to try and come up with my first graphic. We were on our way to an amusement park out there, just driving on the freeway in SF by the airport, and I saw that billboard for Delta Airlines that said,”We Love to Fly.”

The entire billboard was painted real nice too, it was just the kid standing in the field with his arms out like that. I thought, “That’s perfect, man,” cause I was just about to turn pro, it felt like I was gonna take off on this new little journey. I had been on mission to find an idea for a few weeks, I hadn’t anything yet.

I told everybody in the car, my friend John, Justin Girard’s girlfriend Brook, Danny Sargent might have been in the car too, “I’m gonna call Real and see if they want to use this.” I called them from the car and they sent somebody right away to take a picture of it.

We went on tour in the middle of 1993, it was a long-ass tour and it was stressful, a little bit. So about a few days before the end, I cut out with my girlfriend and just hang out in Ohio for a little while.

They knew that since I was always a maniac anyway, I’d just cause trouble and just rage around. They imagined me as this tornado with a cigarette in its mouth sweeping through the farms in Ohio and tearing them up... We got a bunch of farms here.

That’s what I loved with graphics then: instead of talking to me face to face, they’d do a graphic with something funny on it. I think that’s hilarious, I loved it. It depicted exactly what was happening with me at the time. I was in Ohio with a cigarette in my mouth, just going crazy. Hell yeah.

This one too came out randomly. It’s a hard one to talk about, really. I had broken into Jeff Klindt’s house one time when he was gone. I initially kicked his door in just to spend the night, but then later on, I stole his VCR and gave it to the dope man. That’s why the top graphic on this one shows the VCR and broken glass.

The octopus, I guess, is me – with his eight arms, he can just get anything. They were making fun of me and trying to let me know that they know what’s going on. Not kicking me out, which was nice. They just made the board – “look at you.” I paid for the VCR and the glass. I was bummed but I really liked the graphic, though. I like colorful, weird graphics like that. But the whole time I was like, “Damn, I’m a fucking octopus.

I had quit skating for a few years, my little brother got killed or whatever, so I moved to Ohio. I was working a regular job and shit like that, but then I started skating again. I called Deluxe for some boards and they mailed them to me. A few days later or it could have been weeks or months, who knows, they called me and said, “Gonzo wants to give you a guest board on Krooked.” What? That’s amazing. “Hell yeah, I want to do it!” The only I could think was, they’re not mad at me and they’re still my buddies. They wanted to help me out with some money, and they take good care of me when they make a guest board. They mixed my first board with me being a Raiders fan together. I loved it. I’ve been skating ever since then. Never stopped again.

This original of this one came out in 1992, a few weeks after the Flyer board. I told them that Gonz is my favorite skater, and so that I wanted some kind of flowers on there, so Jeff Klindt found an album from England and the name of the band, I think, was Jane. Their album cover was my exact graphic, we just changed the name to “James,” just like the album cover. They kinda reminded me of Gonzo’s flowers on some of his boards.

Back in 2012, I was talking to [Real skateboards’ head honcho] Jim Thiebaud about some other stuff and he told me, “You know, you turned pro twenty years ago now. What do you think of us putting out a reissue of the flower board?” Of course I’m not gonna say no, I love that board. I was more than excited. It was not in the market for the kids, it was more out there for the older dudes, for nostalgic reasons. From Antihero to HUF :: Provocateur-in-Chief Todd Francis Speaks Out

Seb Carayol
Legendary skateboard artist Todd Francis discusses the art of subversive skate graphics, run-ins with Hell's Angels over his artwork, his political cartoonist background, and how it feels to be per...
HIDE COMMENTS