Sometimes, Isaiah Toothtaker dresses in a marble sweatsuit with a vintage MCM leather cap and neon Nikes. Other times, he dons a floor-length fur coat. Regardless, he is always dripping in Gucci and gold, and has a shiny gold grill covering his upper teeth. He has tattoos everywhere, including a dagger on the side of his face and Tucson written across his throat.

It’s clear that Toothtaker is unique, even before he even opens his mouth.

But when he does, insane lyrics come spewing out. “Been an outlaw long before the poster said wanted / Skeletons in the closet but the whole house haunted / Know I’m going to hell / might as well act demonic,” Toothtaker raps on Illmatic 2, a mixtape that showcases his complex cadences—from slow and syrupy to staccato.

My homie Dee, who is probably Toothtaker’s #1 fan, put me on to his music a few years back. So last month, when Dee broke her jaw in a skateboarding accident, I offered to pay Toothtaker—who is also an accomplished tattoo artist—to draw a get-well card that I could email her. Instead, he opted to do it for free, and even sent her the original drawing in the mail. And for reasons like this, Toothtaker isn’t just unique—he’s exceptional. 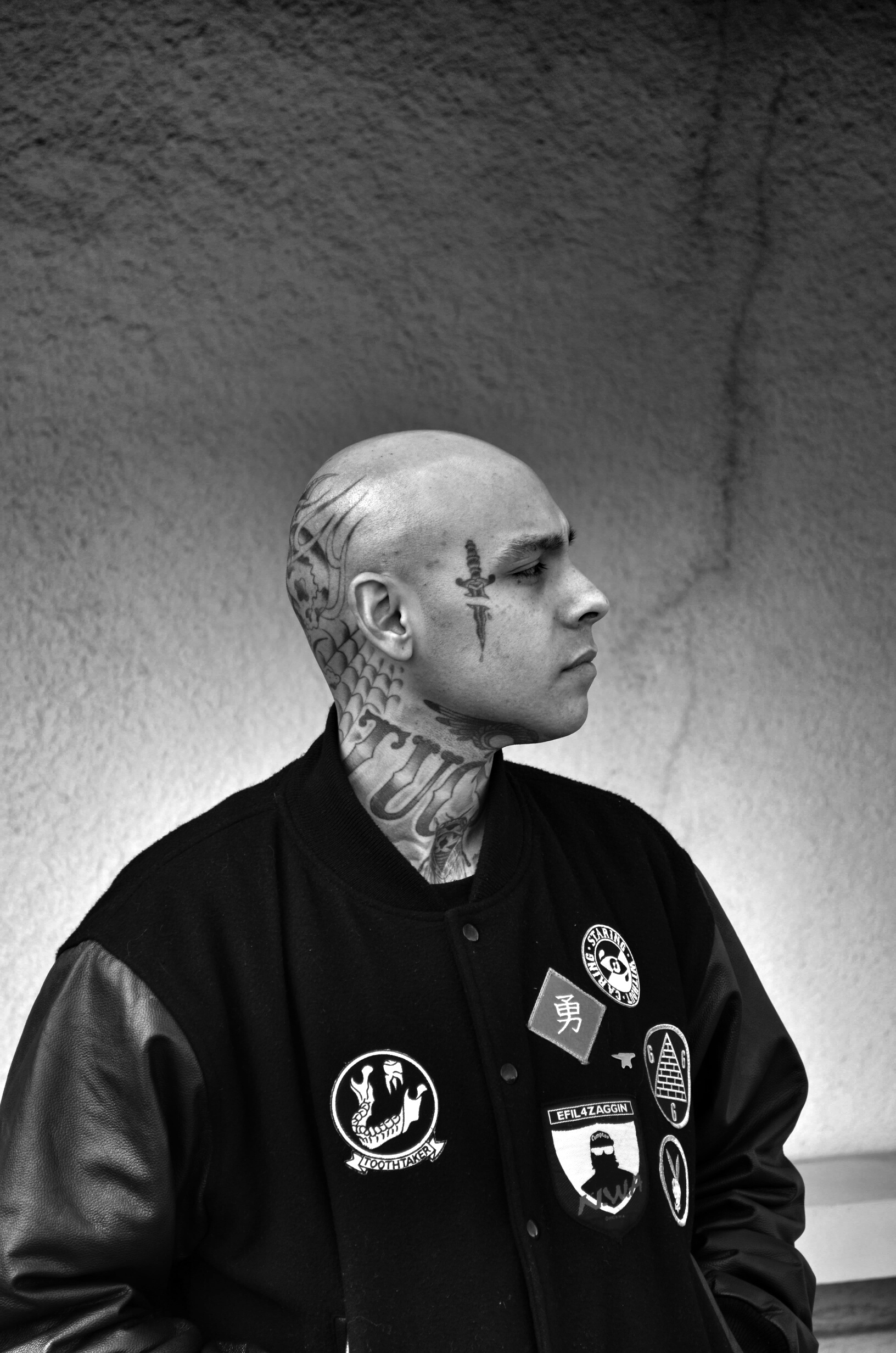 Your style—whether it’s what you wear, how you rap, or what you tattoo—is different. Do you think growing up in had an effect on that?
Most definitely. Tucson was full of weirdos when I was growing up. Always seeing these strange characters doing wacky shit or dressed so different from one another made it regular to be an individual or do something more unique or original. I don’t really examine what has an effect on my everyday shit—like not wearing underwear ever or what type of socks I buy—but I guess if it looks good then I do it. Even though Tucson is this sort-of isolated place there was always freaks here from different areas and the culture was always in healthy variety.

What was it like growing up there?
Growing up here was cool—I got into fistsfights a lot, the summers were super hot, my friends were hilarious, Mexican food is good, the drive-in was pretty sick, I used to ride my bike all over the place, cops are shitheads.

When did you start rapping? Do you remember your first time performing in front of an audience?
I started rapping around 15 but nothing serious for a while. Man, my first few performances were a joke. I was pretty nervous and I’m sure my raps were bogus. I had sideburns then.

How did you develop the way you deliver your lyrics?

I think it’s always just whatever I feel like hearing or trying to do something different from my last verse or not trying to repeat myself. I don’t remember my lyrics really so I have a clean slate to write something else or try a different approach in style. That makes performing a hassle because I got to relearn all that shit. I also don’t want to ever sound on trend or like anyone else so my lyrics or delivery come from that position too.

Where do you come up with the lyrics for your songs? I know you said in one of them that you “spit 16 bars, every one is a fact.”
I don’t really try to have overall concepts—I just want to say a bunch of cool shit. Themes in my songs mostly come from a streamline process or if the writing takes a natural shape or develops because that’s how much something resonates.

Your tattoos of Lil B, old-school cholas and panthers with doo-rags are too dope. How did you learn to tattoo? Did you apprentice or were you self-taught?
I had a formal apprenticeship, very staunch, difficult. My mentor was the president of the Tucson chapter of the Hell’s Angels at the time; he was a difficult dude that demanded a lot of work. I spent 50 hours a week at the shop doing regular tasks like cleaning tubes and making needles for my boss plus five other tattooers. I stayed busy. I also worked a part-time job 35 hours a week in addition. I really had to earn my knowledge. I’m appreciative and glad I had a more strenuous apprenticeship though; those experiences taught me a lot.

Can you tell me a little bit about your tattoos?
I got a bunch of stupid-ass tattoos; I only got a few cool ones. I usually don’t get too metaphorical with why I get something, a design doesn’t have to mean anything to me. I’ll be stoked if it just looks badass. Mike Giant did this skull and snake half-sleeve thing that’s pretty rad, it has roses in it too.

Who or what has influenced your personal style?
Drug dealers and rich people.

Five favorite items in your closet?
Leather basketball jersey from Estates Family Guilds. Vintage Ralph Lauren bomber jacket. My Staring Without Caring custom varsity jacket. Gold vintage Gucci bracelet. And lately, these dirt bike boots with zippers on both sides, but I forget what the brand is right now.

Who and/or what is Machina Muerte?
Rap shit. My friends. We all do so much different shit or make a variety of shit it’s hard to say it’s just one sort of thing. But it started as a rap crew—we all do more than just rap though. People can go to machinamuerte.com and learn some shit or hear something or watch something. There’s a whole lot of shit to dig through.

Your bio says you’re a two-time felon. What happened?
I stabbed this dude in the face and head a bunch of times and cut his ear half off after beating him up real bad; and I beat up a bunch of other fools who tried to jump me but I broke this one guy’s face in half and his eyeball popped out.

What have you learned from being a father?
Patience. Unconditional love. How to better explain myself or communicate more clearly. Wider awareness of my actions or thinking further beyond the present time. Basically, I want to be a better person and healthier emotionally so none of my issues affect my children. I want to continue learning and trying to improve myself and my circumstances, so my twins can be in the best position I can provide.