Where did the name Gorbals come from?

The name is from a neighborhood in Glasgow, Scotland that my father grew up in. It was really low income, a lot of factories, very blue collar a very rough neighborhood.

What made you decide to name it after the town?

I visited where my father was born a few time but I already knew the concept of what I wanted to do and the food I wanted to do and how it would be like a pub with really good food that takes notes from Scottish and Jewish food. My mother is from Israel and my father is Jewish also but he was born and raised in Glasgow. So, I was tying to think of something that was a bit dark and dingy sounding a bit rough, and that people would question. It’s the inspiration, at least 50% of the inspiration of the restaurant. So I was driving across country and it just popped into my head, like, why not? It sounds great, it sounds like a dirty dingy dive bar and that’s sort of what we are?

You studied culinary arts abroad in Florence, Italy, was it intimidating?

I went with super big eyes because I was in High School and I got to be sort of completely free of everything. I was living in Italy at 17, and I was living in a house with other students, with no responsibilities, so it was kind of awesome. It helped me grow up. I learned some really good foods and cool techniques, and I learned a bit of Italian but the day I came back, I stopped speaking it.

Was food a big deal in your house growing up?

Always. My father was the cook of the house and always cooked dinner for my mother every night. He worked out of the house and had his office in the house. It was a role reversal, my mother was the professional that went out and commuted to work and my dad was the one that was always at home. It was always very important. Every time we went on trips as a kid, it would be based around food. We would go to Europe, so we’d go to France or Spain or Portugal, where there would be amazing food. My parents loved being around the Mediterranean, so that’s where they would take us on trips.

It seems like you had the very traditional Ã¢â‚¬Å“family styleÃ¢â‚¬ dinner environment.

Always. It was super important for my parents. I just think that’s how they were raised. I think it also stems from it’s a very European thing. The meal as a family is very important, and sharing that together, it’s a time for us to relax together.

Knowing what you know about Top Chef, would you ever do another reality show again?

Yeah. It would all depend. I’m actually working on something right now. 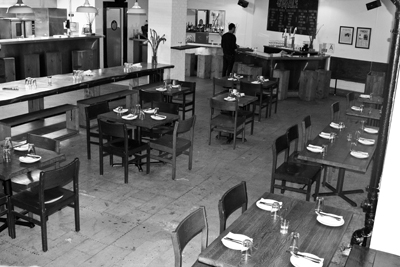 Were there any regrets that you had after the show was over?

No, how can there be any regrets? I won. I was 24 years old, I was a line cook, but I didn’t have that much responsibilities, I didn’t have any children, and I had nothing holding me back, and that’s probably why I won. I don’t think I was the best person, I think I was the most relaxed. Like, if I get kicked off, what’s going to happen, I go back to the restaurant that I worked in?

It seems like with those shows that even if you don’t win the Ã¢â‚¬Å“titleÃ¢â‚¬ you still get something from it.

Well, a lot of people do, it depends how you spin it. Marcel, the guy that came in second, he’s got his own show going on right now on Syfy, he’s doing really well.

During your time on the show, being around all those different types of chefs, did you pick up any new techniques?

Not so much on the show but more from the places I worked. I learned a few things from the show but it was more about dealing with people. It’s such a short period of time. Its only 5 weeks and then another week for the finale, and they film every single day, two days equal one episode. There was two days off but its not even a day off because we were just stuck in the loft you’re completely disconnected.

I heard that about certain reality shows. How do you spend your time since you have limited access to the outside world, what do you do?

Nothing. No books, no nothing. It’s for real. On rides home from challenges we could sometimes listen to the radio. They wanted you to go crazy, well, not crazy but they wanted all our emotions and all of our reactions to be at each other. So, its reality but its in a box.

What’s your opinion of a good chef? Do they need to know how to make everything?

Well no. It depends on what your definition of a chef is; you’re only a chef once you’re running other cooks. So I guess now, I’m a chef. I’m still cooking and working on the line everyday. I guess its someone who is well versed but its alsoÃ¢â‚¬¦its not someone that can do everything, it can be someone that specifies on one type of cuisine and does it perfect. That to me is almost more important than knowing how to do a couple of Asian dishes, a couple of this, a couple of that. Knowing one technique and being dedicated to that that’s why there are those chefs that are amazing, like these specialist, that have been doing this one thing their whole lives, and just perfect that. Also being a chef and knowing basic cooking techniques, and knowing how to do them properly you can apply that to any type of cuisine. But being well versed in one specific type of cuisine is more special because you go there and it’s the best of what that can be. That’s so much more exciting to me than someone who can do everything. 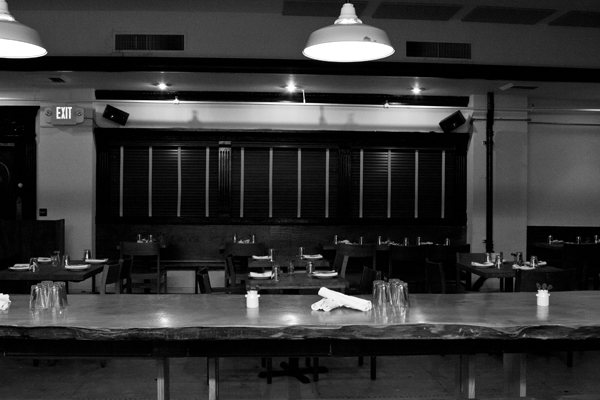 The menu you prepare at Gobals is very unique. How did you conceptualize the different combinations?

I mean its very trial and error. I’ll take a concept and apply it to food I already like to eat. So, like the bone marrow. I love bone marrow regardless, bone marrow with salt, it doesn’t need anything else, just spread it on a piece of bread. I think a lot of chefs do this, where, what compliments and what contrast in a positive way. Ok, like bone marrow is super fatty and you want something tart and acidic with some roundness to cut through it, so you use vinegar, and the mushrooms go together with the vinegar for texture and for a deeper flavor, walnuts. To me, in my head, all those things go together and should taste good together they don’t seem to foreign to me.

So it’s all trial and error?

Well no. Its basically, your basing it off of something that you think will be good, and then after that its trial and error, in my head all those things sounded like things I wanted to eat at that moment in time and things that I had.

Like your menu, you have a unique location. Did you think about the risk of having Gorbals tucked away inside of The Alexandria Hotel? Most people don’t even know its there.

Yes. The reason I did it the people that come in there [Gorbals] are coming in there specifically for us. And I also felt like, everything in LA that I love or that I think is sort of cool, LA isn’t street accessible in general. You have to drive to places. You’re not walking by and saying, oh this place looks good. Everything in LA that’s sort of cool, you need to find. So, it felt like LA’s style to me, with having things being hidden. Now as a businessman, that’s probably stupid but I was running pure adrenaline. 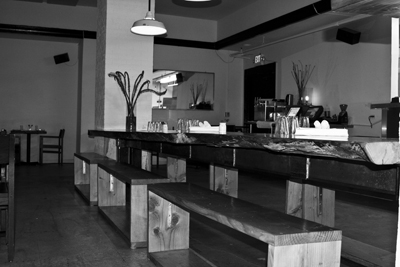 Yeah, I’m not a snob. I get cravings for McDonalds’ cheeseburgers. They are perfect.

I know you travel around a lot, and see all kinds of foods, do you still get amazed by new dishes that you find along your travels? And have you discovered something that you couldn’t wrap your head around?

Usually its something more simple than you think because those are the real life smack your own head because you’re like, why didn’t I think of that?

What would be your last dish on earth?

Easy. Its so stupid but it makes me so happy. There’s a shitty 24-hour convenience store in the town I grew up in and I would always get the chicken cutlet, on a roll, with tomato, mayo and bacon. And I would get that all the time, and that made me fat in high school. I would get that and a side of super crispy French Fries, Hellmann’s Mayonnaise or Kewpie Mayonnaise, which is a Japanese mayonnaise, its kind of like crack and HÃƒ¤agen-Dazs vanilla ice cream.