Los Angeles is a strange place. We pray for rain, and instead residents end up with a football team and a proposed billion dollar football stadium in Inglewood which will not only house the newly-minted LA Rams, but possibly a second team like the San Diego Chargers or Oakland Raiders.

It’s been twenty years since Los Angeles was home to two football teams—the Rams and the Raiders—who both struggled to draw fans during their time in Southern California.

During their absence, football as an entity has surely passed baseball as the “national pastime” despite the MLB having being entrenched in culture since 1869—compared to the NFL’s founding in Canton, Ohio in 1920.

It seems that people have grown tired of baseball’s supposed snail’s pace. They complain about four-hour games, pitcher’s duals, steroids, and the lack of aggression.

Conversely, baseball purists have reveled in the game as of late since performance enhancers were seemingly pushed out of the sport and there was a return to a style of play that rewarded moving base runners along, pitching, and offense manufactured from station-to-station baseball. Look no further than the recently-crowned World Series champion Kansas City Royals as proof that a team can play an old-school brand of baseball and still hoist the trophy in October. 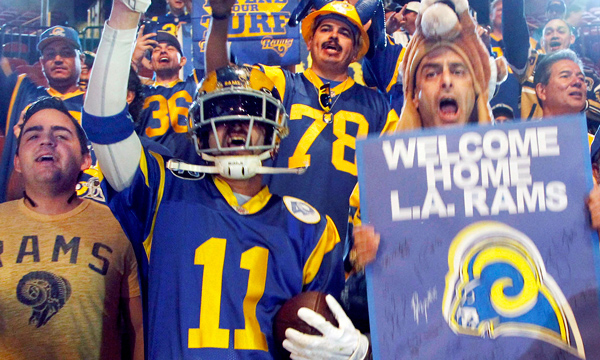 If there is one thing that remained a constant during the NFL’s sabbatical from Southern California, it was the city’s acceptance of the Los Angeles Dodgers as the flag-bearer for national pride when it came to city-to-city rivalries.

Since the Rams/Raiders left in 1995, the Dodgers have finished first in the national league in attendance eight times—finishing first the last three years—and never finishing worst than seventh in the last two decades.

With an average attendance of 46,479 during the 2015 season, the Dodgers finished with the best attendance in all of baseball. The numbers solidify the notion that the Dodgers are truly L.A.’s own after moving West from Brooklyn in 1957.

Despite the Dodgers being a Los Angeles institution for the better part of half-a-century, many suspect that the inclusion of the NFL into the sporting equation could cause a mass exodus from Chavez Ravine to the proposed Inglewood stadium where fans will trade the butterscotch voice of Vin Scully for shotgunning beers during Sunday tailgates.

The MLB and NFL only overlap for a few weeks each year when baseball is pushing toward crowning a champion and football is just starting to unveil who the biggest movers and shakers of the new season will be. Thus, there it little reason to believe that fans are going to need to choose what team they are going to follow or what games they are going to see in person.

The L.A./St. Louis Rams themselves are coming off a 7-9 record and have the distinction of drawing the fewest fans in all of football in 2015—averaging just 52,402 fans as compared to the league leaders in attendance, the Dallas Cowboys, who averaged 91,459.

Consider the fortune of the L.A. Clippers as a potential warning sign for a sub-par product and the response from dissatisfied Angelenos.

Prior to Doc Rivers and Steve Ballmer’s involvement with the franchise, the Clippers not only continuously lost, but hold the distinction of having 45 years under their belt without a Conference Finals appearance. The attendance reflected their losing ways as well—as the Clippers continually finished in the bottom third in attendance during the Donald Sterling era.

The Rams were last in the league in attendance in 1994, their last year in Los Angeles. The Los Angeles Times noted of a game between the Rams and Cardinals, “Only 32,969 fans attended the Rams’ 14-12 victory over the Arizona Cardinals at Anaheim Stadium, the smallest crowd of any regular-season, non-strike game since the team moved here from the Los Angeles Coliseum in 1980.” The attendance was only 362 people shy of tying what is believed to be the smallest NFL crowd for a season opener despite a near-perfect 87-degree day.

Many experts point to the Rams’ first failed tenure in Los Angeles being the result of the aforementioned woeful attendance which was split between the LA Coliseum and Anaheim Stadium.

However, today’s NFL relies heavily on national television networks and the subsequent $4.9 billion dollars annually that it generates.

Although most teams don’t disclose their finances, the Green Bay Packers are the best barometer for team-by-team revenue because they are a publically traded company and their financial reports were made public in 2013. According to CNBC, the Packers earned $187.7 million in national revenue, which consists of its portion of NFL national television contracts, sponsorships and a portion of jersey and ticket sales—split between all the NFL teams.”

Perhaps the Dodgers’ biggest advantage over any competition that the L.A. Rams pose lies not just in their attendance track record, but in their dedicated regional sports network (REN), SportsNet LA, which earns the club $334 million USD in revenue each year—compared to the Lakers who come in at a distant second place with $200 million USD based on their own regional channel. The Dodgers make almost $150 million USD more in television revenue than that of the average NFL football club.

As fivethirtyeight.com noted, “If you’re keeping score at home, that’s 60 percent more TV dollars than the average NFL team rakes in annually. And since the NFL does its television business on a strictly national basis, the Rams can’t unleash the power of an RSN on the eyeballs of the nation’s second-biggest media market.”

“You’re not going to suddenly cash in on a bigger TV contract because people in Los Angeles are watching the Rams instead of watching whatever the game of the week is,” Neil deMause, the co-author of the book Field of Schemes: How the Great Stadium Swindle Turns Public Money Into Private Profit, told The Daily Beast.

56,000 people bought season ticket packages for the upcoming 2016-2017 NFL season which will mark the return of football in Los Angeles. Celebrities have tweeted. Former St. Louis Rams players have been humble, yet excited for a fresh start in a new marketplace. But what happens when the “newness” wears off? As the Chicago Tribune put it, “L.A. is not a sports town. L.A. is a Dodgers town and a Lakers town. Well, a Dodgers town and a Magic Johnson-Kareem Abdul-Jabbar–Kob-Shaquille O’Neal town.”

If there is any indication that the Dodgers have nothing to fear, look no further than LA Rams owner, Stan Kroenke’s, original intentions for the plot of land that was purchased in Inglewood in 2004 by a company that he served as a board member for. The area which was intended to be developed—estimated at the size of 17 football stadiums—was supposed to be a future site for a Wal-Mart.

Vin Scully often says it best. While he hasn’t commented on the L.A. Rams, he did notably serve as the orator when another nuisance interrupted the solitude of Dodgers baseball: an earthquake. “A little tremor here in the ballpark,” Scully said. “I’m not sure if the folks felt it.”