Tom Winslade digs into one of our favorite shows ever, House of Cards, and muses on the nuanced ways in which season 3 is simultaneously the best and worst of the series. If you haven’t watched it and live under a rock, all seasons are available for view on Netflix.

So, it’s been a couple of weeks since the latest season of House of Cards was released via Netflix tha gawd, and after watching all 13 episodes, please believe I need to get some things off my chest. If you’re yet to finish Season 3, you’re insane for even reading this far. Serious spoilers ahead. Bookmark this page and come back later, or read ahead if you’re up to date/a reckless human. 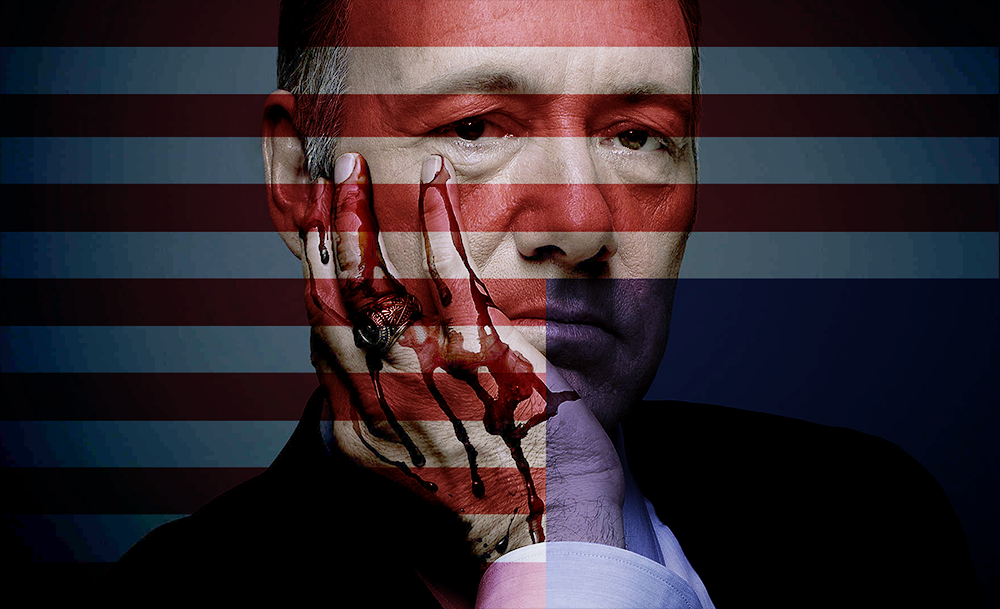 If you’ve scrolled past that badass photo of Frank Underwood dripping in blood, I’m assuming you’ve watched all 13 episodes. So let’s proceed. House of Cards Season 3 is simultaneously the worst and best season of the show to date, and here’s why…

One of the things I loved the most about seasons 1 & 2 was the show’s pace. The twists and turns, the meticulous plot development, and the absolutely flawless execution of Frank Underwood’s underlying master-plan; as he schemed, plotted, and fucked his way to the top. When Frank ultimately became POTUS in the final episode of Season 2 and it came to a climax with that shot in the Oval Office, I instantly lost my mind and choke-slammed my flatmate through the coffee table because it was that fucking awesome.

And herein lies House of Cards’ biggest challenge. The whole premise of the show was more-or-less focused on the central narrative of Frank’s reckless ambition to become president, so when ya boy ultimately reached his peak, where do you go from there? The writer’s bold answer to this conundrum was to flip HoC from a plot-driven thriller, to an emotional character drama, and started to dissect the intricate characters it had developed along the way. I’ll explain what I mean by this shortly, but what it boils down to is that while House of Cards is still a great show, it’s fundamentally not the same show.

And this is what sucks the most about the new House of Cards. The charm of Frank’s character pre-Season 3 was that he was a ruthless son of a bitch, and essentially Satan incarnate. He seemingly had no limits, to the point that the show could literally go anywhere and each episode was surprising, if not shocking. With F-Dot now landing the most powerful job on the planet, he’s ironically at his most vulnerable. All eyes are on him and people are starting to pick away at his cracks en masse.

In one of his first lines of the season, Frank jokes,”You have to be a little human when you’re the President,” before pissing on his father’s grave. Textbook Underwood. However, over the course of the following 12 episodes, we see the mask slip for real. My understanding of the show’s title was that Frank was in the process of building his “house of cards,” and the thrill was that it could fall at any moment. With it seemingly starting to collapse by the end of Season 3, my hope is that we see Yung Frank return to his ignant, unfuckwithable mindset in Season 4 as he does anything he can to steady the ship. Lord knows I miss it.

President Underwood finally met his match this season when put up against Ru$$ia’s ice cold killa, President Petrov. Whilst being similar in many ways, the pair couldn’t be further apart when it comes down to presidential clout and experience. Petrov is one step ahead of Underwood for near enough the whole season and is subsequently the catalyst in exposing the humanity of Frank that I mentioned previously. After allegedly killing his own troops to gain leverage in the Jordan Valley, which is some heavy shit, it’s clear that Petrov has no limits when it comes to getting the outcome he wants, much like the Frank of season’s 1 & 2.

There’s a scene where the two presidents are negotiating terms for a peaceful resolution in some bunker, and Petrov lays into Frank in his most personal attack to date, by using Claire as a bargaining chip. There are no witnesses to the conversation and IMO this was the perfect opportunity for the real Frank to rear his ugly head and grab the sucker by the throat – to show he’s not to be fucked with, in the least presidential way possible. But nah, Francis backs down, boots Claire out of the UN, and subsequently had me shouting, “You’ve changed, man!” at my TV. I liked it better when Frank was an omnipotent asshole, murdering reporters and generally getting shit done.

I’d pretty much written off Doug after Rachel repeatedly clocked him over the head with a rock in the Season 2 finale. You know, when we saw him laying there in the middle of some forest, unblinking and bleeding out. But no! Doug Stamper AKA Steezus rose from the dead just in time for the new season and he was on a god damn warpath. Over the course of the new episodes, we see Big D scheme his way out of the hospital ward and back into the White House, in between physiotherapy sessions and battling his ongoing addiction issues. This is arguably the most gripping narrative that S3 has to offer.

As the viewer, we’re only shown what we need to see in terms of Stamper’s game-plan, and I still don’t know whether we’re supposed to love him or hate him, but he single-handedly kept the dark side of the show alive, so props to him for that. Given that he’s finally buried his demons from Season 2 – literally – it will be interesting to see how his character develops now that he’s teamed back up with Frank Underwood and reformed world’s most-deadly tag team since Edge and Christian, or rather, Frank and Claire.

Speaking of Mrs. Underwood, the “cliffhanger” that this season ended on was the revelation that First Lady had decided enough is enough and subsequently walked out on the President. But please, who didn’t see this coming? Before the season even started, the promotional campaign hinted that things weren’t well in the Underwood camp, and the gradual crescendo of this plot line throughout the season was hard to miss. For sure, they seemed to sort their shit out a few times, but there was really no coming back from that dark scene in the Oval Office where Frank FINALLY grabs someone by the throat. Shame it was his wife, though. The only good thing I can take away from this ending is that there just has to be a 4th season.

In conclusion, Season 3 in it’s entirety was about cracking the show open and reseting the playing field ahead of Season 4. House of Cards was wrapped up so neatly by the end of Season 2, that they simply had to change the formula to give the story some room to breathe. It’s a shame that it took a whole season to do so, but it’s not like they gave us bad television in the process. True, it was the worst season of the show to date, but only because the first two set the standard so high in the first place. If Season 3 has breathed new life into HoC in the way it appears to have, that’s some low-key genius. Time will tell if the plan has worked, or if it was even the plan at all, but if House of Cards Season 4 hits as hard as it has been set up to, shouts out to Season 3 for being the real MVP.

Seasons 1-3 of House of Cards are now available to stream via Netflix. Jensen Karp
Jensen Karp recounts the best TV shows he watched in 2014 beginning with a prediction that network TV will die in 2015. Yeah, he went there. His list focuses on narrative depth with shows like Tran...
HIDE COMMENTS