Parisian artist HORFEE likes to create disaster wherever he goes, leaving gooey, gruesome pieces on walls around the world. But for his current exhibition, “Chaos Pays,” at New Image Art in LA, HORFEE organizes his “mess,” as he calls it, and shows more than 20 new mixed-media works.

The works in this exhibition feature a different color palette, with layers of neutral tones to draw in the viewer and lead to discoveries. “All the greyish ones take more time for your eyes to adapt to,” HORFEE told The Hundreds. “My work is full of movement and landscapes with characters where nothing is what they are supposed to be anymore.”

Though more organized, his work inside the gallery is just as weird and wonderful as it is on the streets. “I just see more interesting things in a piece of art that is weird than in a piece that is perfect,” he explains.

In the interview below, HORFEE discusses how he developed his aesthetic, his favorite zines, his new exhibition, and also compares his work on the streets to shit and his work in the galleries to vomit. Continue reading to find out why. 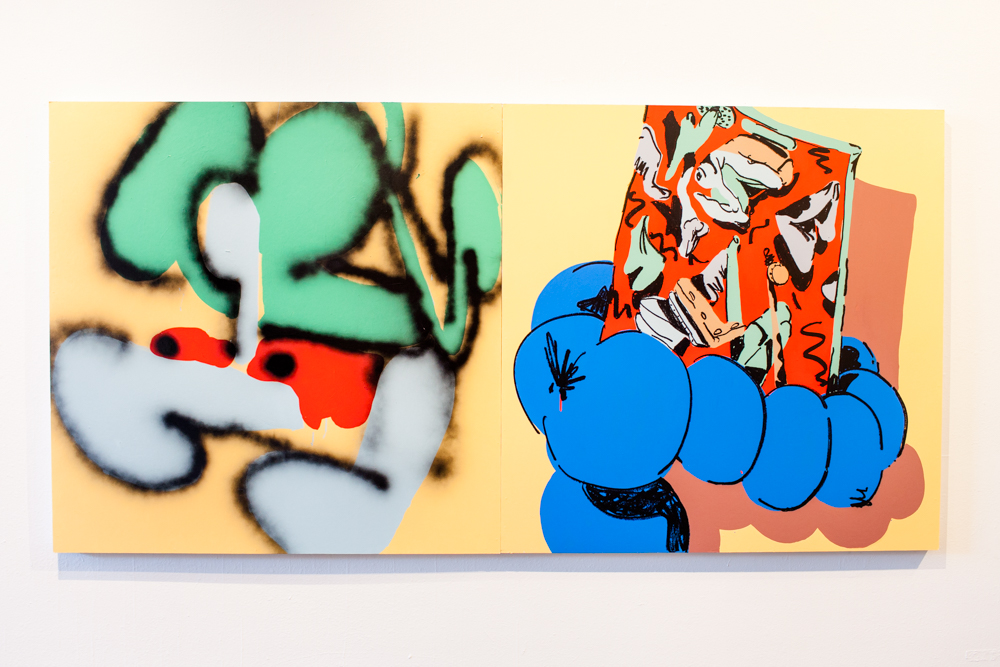 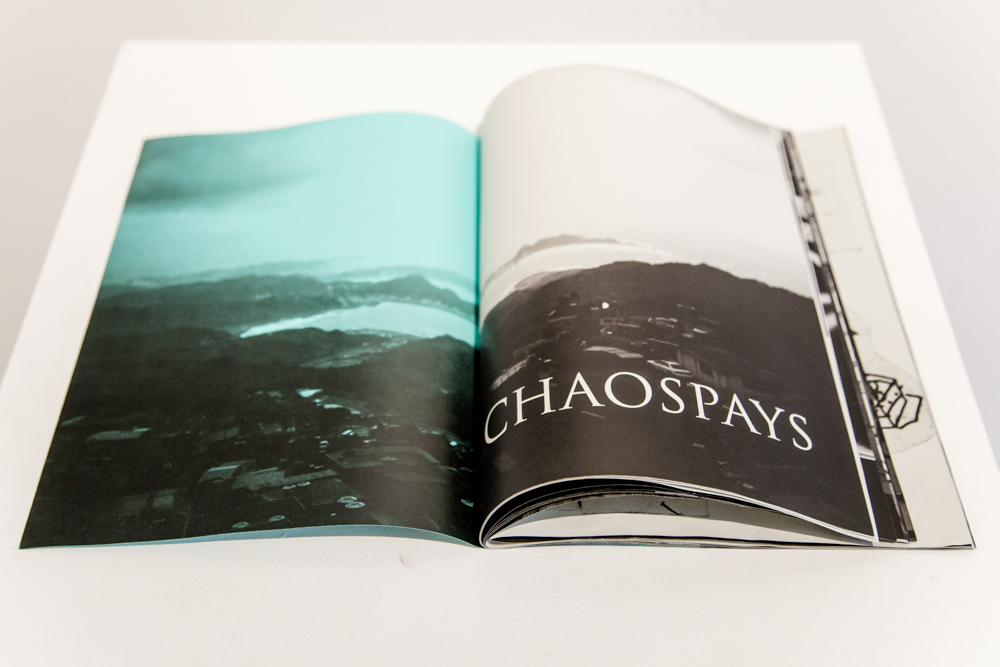 ZIO: How did you develop your aesthetic? Did you go to art school or were you self-taught (or both)?
HORFEE: I think style is a mix of practice, personal energy and accepting the clumsiness in what you do. Incorporating the errors of what you wanted to do in the beginning. If you push your limits you find where you’re comfortable to do your thing, and take pleasure in it. I did graffiti with my nickname HORFEE, and kept it for many other things. I was not really drawing at all when I was a kid, but when I had an a serious accident, I had to stay three months in a chair, so I started more and more drawing stuff around my name. It was just a signature at this time. I went through a lot of documentation about people who were doing graff in the U.S. It was obvious that I wanted to feel comfortable drawing whatever I wanted and I figured out I just had to do more and more of what my body could produce. I stopped school very early to finally enter in a fine art school in Paris seven years later. I sucked at it. Just boring rich people inventing an exotic activity in a studio. I wanted to create disaster everywhere I went. I didn’t belong there but I figured I had to finish it. During this time, I also understood that I wanted to succeed in bringing my expressions indoors. And all I was doing was drawings on walls—that doesn’t belong at all in a gallery. 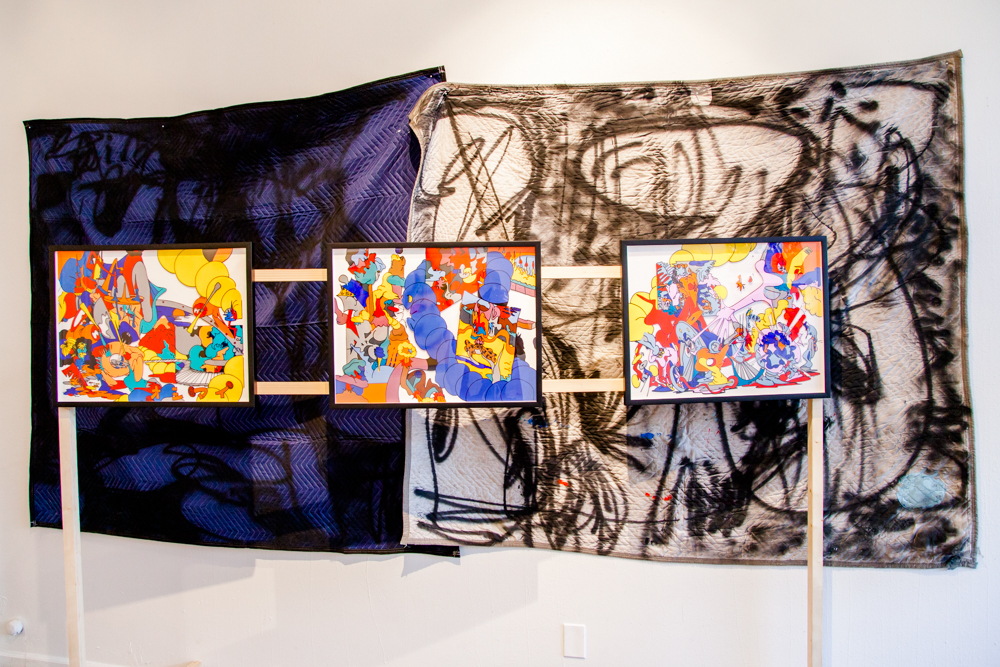 In the last year or two, you’ve been participating in more and more exhibitions. Have you found it difficult to create work with the same energy for galleries that it has on the streets?
This question is the center of the entire wave in the period we live nowadays to me. I think doing shows and sharing what I do with this scene is a new kind of motivation, so I have been doing new kinds of works. The energy that makes me shit on the street of a city is mine anyway, so my paintings or installation goes with it. It makes sense to me to evolve toward that direction, aesthetic wise or space wise, that I like. I adapt my ways until I feel good in the middle of it. The vocabulary in the street is very rough and direct, and the approach of the gallery space is also different because maybe the words I use are different: street could be shit and gallery vomit. One is digested and direct because you need to get rid of it, and the other one is more of a research and try to see if you feel better after it. 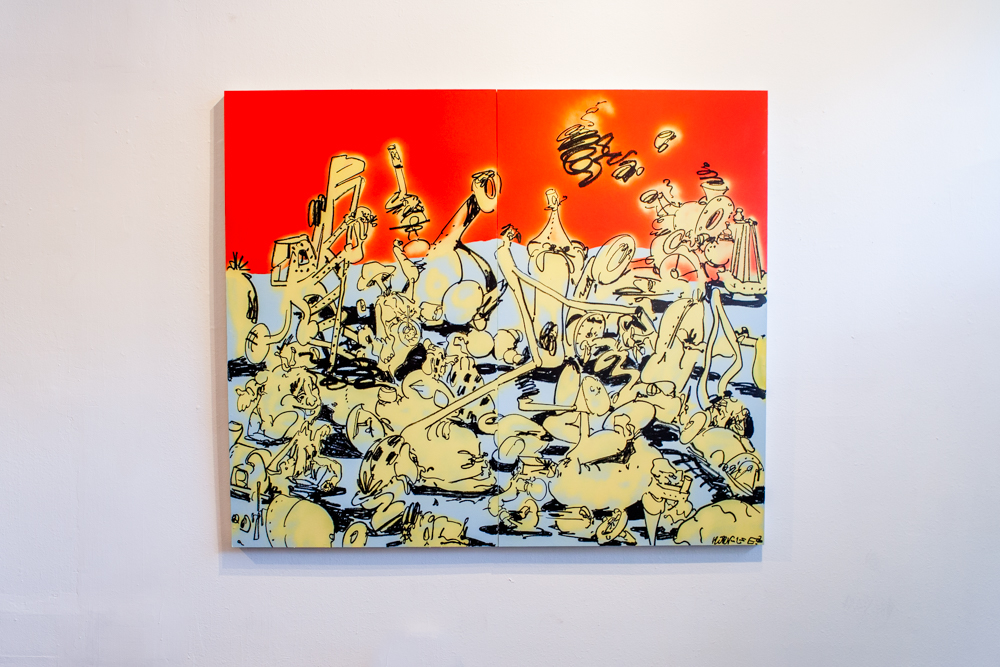 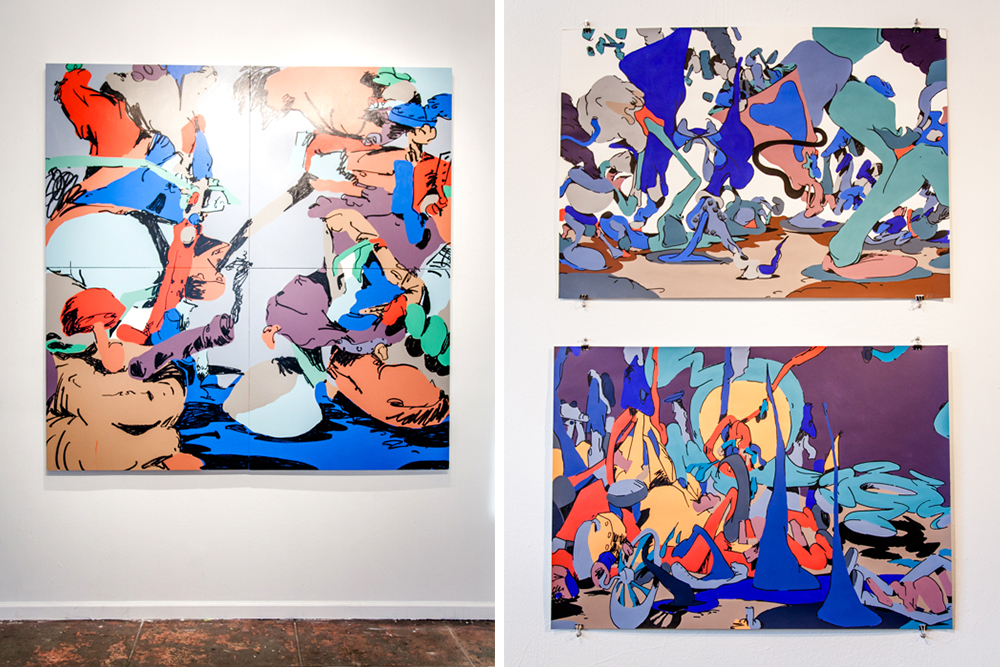 Are you inspired by other artistic movements? Which ones and why?
I see the art world like a very large source of inspiration. I go there like a tourist and watch and learn. It took me a long time to understand the weird in art and finally got stuck in it. It sounds now like natural “human made art” to me when I see Mike Kelley’s work or more recent André Butzer or Federico Herrero. To me it’s just about the feeling when you see and understand the subject.

It’s something really important to make things alive in the space and not only on the surface. I have periods when things have to be “all in one,” and periods I have to de-construct my work to transmit to people. It’s probably when I feel the loneliest doing it. I like very much the spontaneous and non-cultivated paintings from the early century in France, it’s nice to see roughness in art for the non-bourgeois, when very refined paintings were used in the advertisings, for the rich part to be mind-trapped with it.

I also enjoy things that look like they were made by monstrous human beings, who didn’t care at all about the mass population’s understanding or use. That’s inspiration to me. 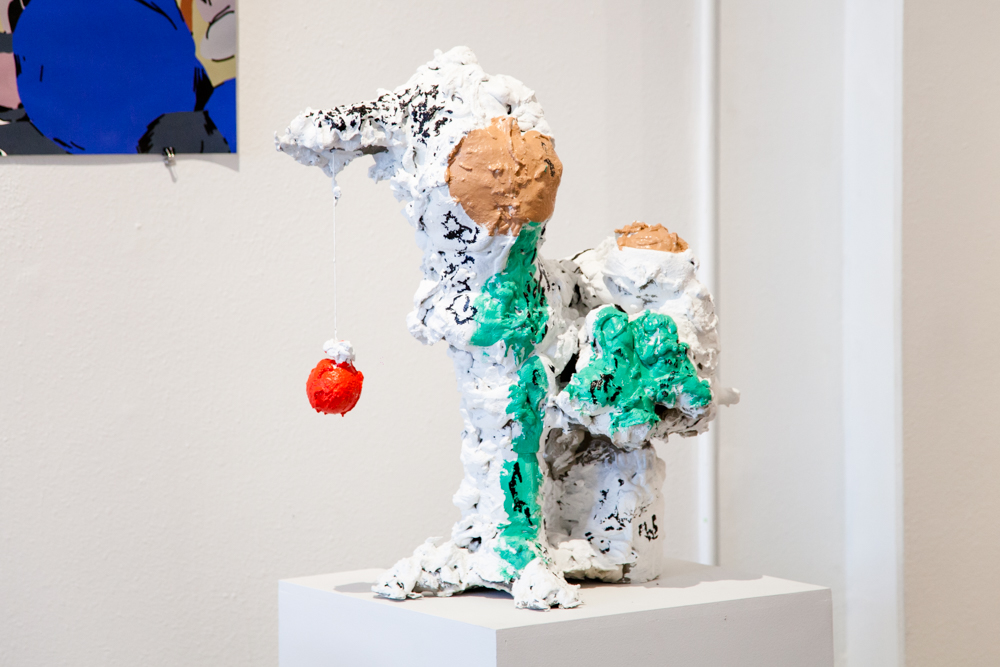 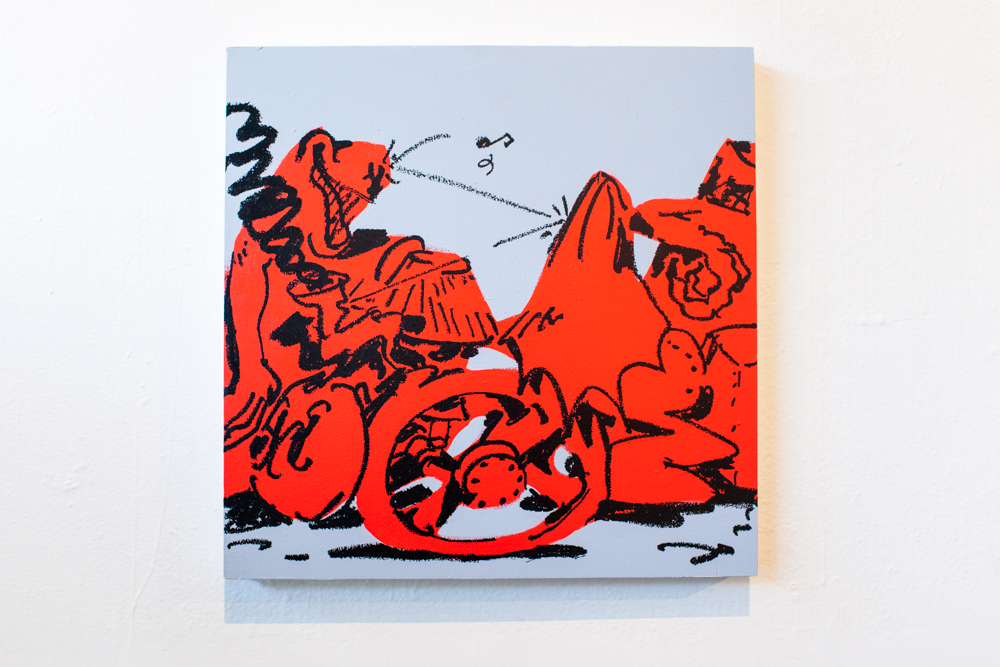 I read that you are interested in underground comics and zines. What are your favorite comics/zines that you own?
I own so many and love them all. All countries have their best zines makers. I like the subcultures that have an alternative to mainstream editions. Very cheap zines, because that is what they’re mean to be: affordable, collectable, and accessible. I have some good ones that I like from Nazi Knife, classic Gary Panter stuff, old Life Sucks Die too, and the recent group zine they made called “Mould Map.” Early “Elles Sont de Sortie” are nice too. Problem is there are so many... Isolated artists are good at what they do in their room sometimes and I like to see their personal techniques to produce interesting images. Zines are very important to keep on communicating, in a book object, with no sort of authority censor. 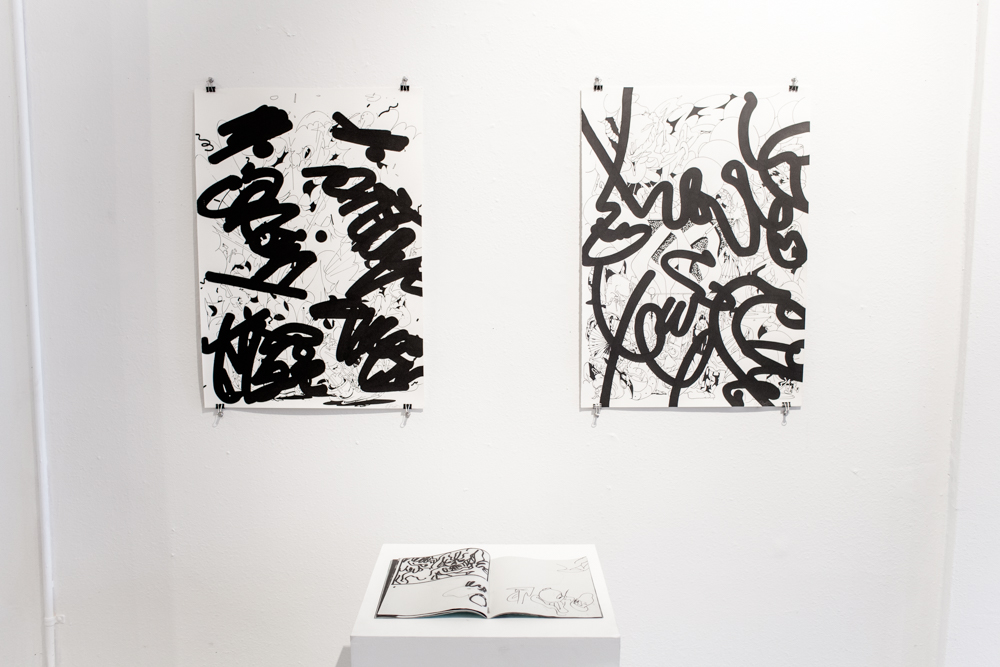 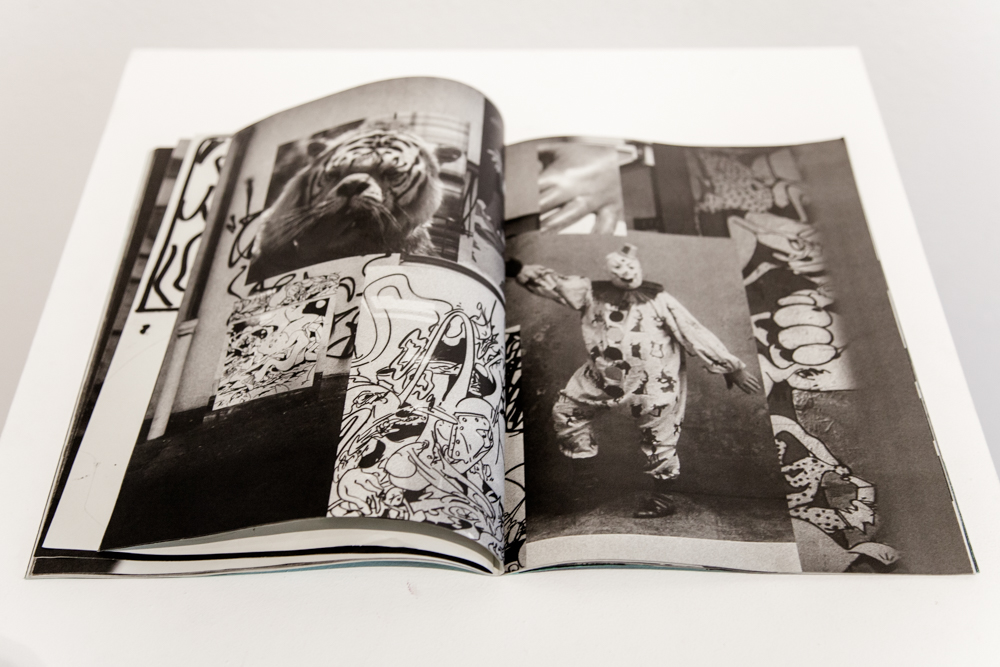 Where are some of your favorite cities to travel to and paint? Where haven’t you gone that you would like to go?
I travel everywhere I can. I have been traveling to places where it makes absolutely no sense to paint. I like Asia vey much and try to see what’s good in painting the street there. It’s so full of computerized vinyl sticker letters that spray paint stands out a lot. I would like to go to India next and watch people skate. I like that. I just want to see the world before I am blind and lazy and poor as fuck. It’s normal.

Why did you name your new exhibition “Chaos Pays”? How is the title significant to you?
“Chaos Pays” is a way to say that I feel happier to destroy an image in the process of creation than just being organized and polished. I just see more interesting things in a piece of art that is weird than in a piece that is perfect. Neutral art is good to make everyone happy and make sure you get the most potential buyers, but it doesn’t say anything other than “pick me to decorate your room.” It has no feeling. 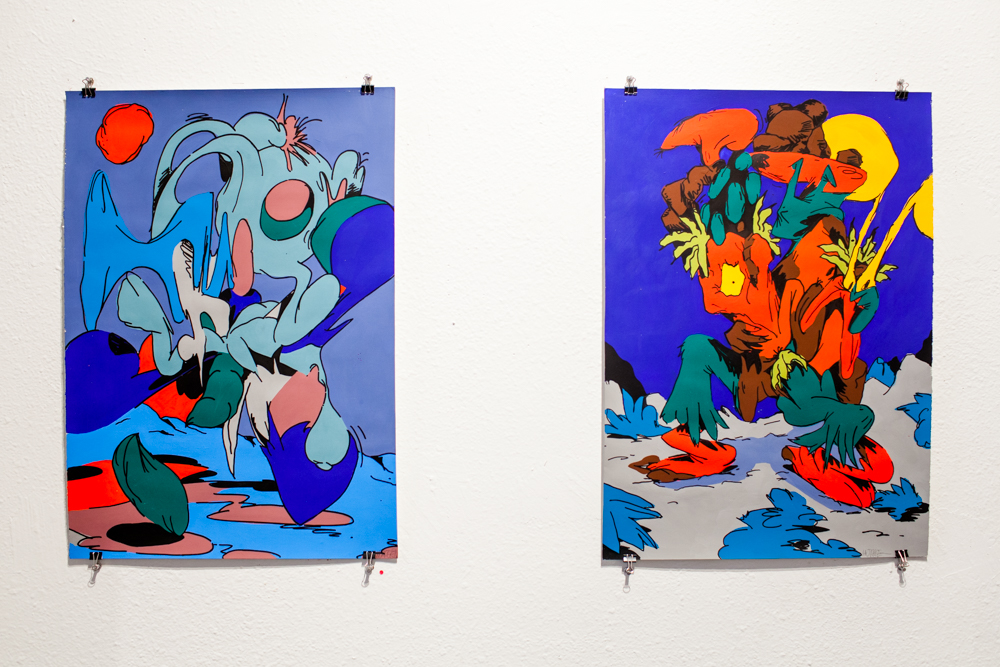 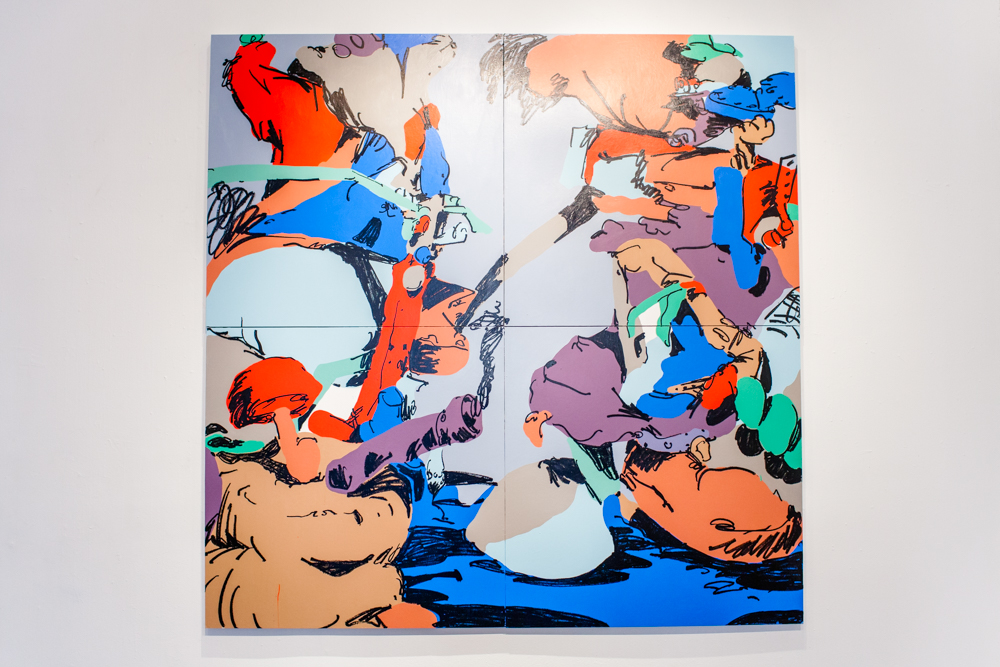 Can you tell me a little about your current exhibition at New Image Art? How is it similar and different from your previous exhibitions?
For my first solo show in the U.S., I wanted to wait and find the right place to do it. New Image Art was perfect because it has a good history and has shown good artists in the past years. For this exhibition, I didn’t want to show graffiti-related work because how could it make sense to Americans who saw more graffiti in their city than me in mine? I can’t compete with that. I wanted to show my capacity to organize my mess and show a different palette of colors than the very classic ones I used in the past. All the greyish ones take more time for your eyes to adapt to. My vocabulary of work is full of movement and landscapes with characters where nothing is what they are supposed to be anymore; I wanted to expose myself as someone that treats the image and the space as a research field, and not someone making perfect products.

What are the main themes in your work?
Well, I guess I have a vocabulary from all sorts of folk art mixed with the rage of a dog! My theme is and will always be about how to face this world as long as people make so much shit in it. How to appreciate the good and the bad for what it is. The poetry of a landscape that represents chaos means the life to me. 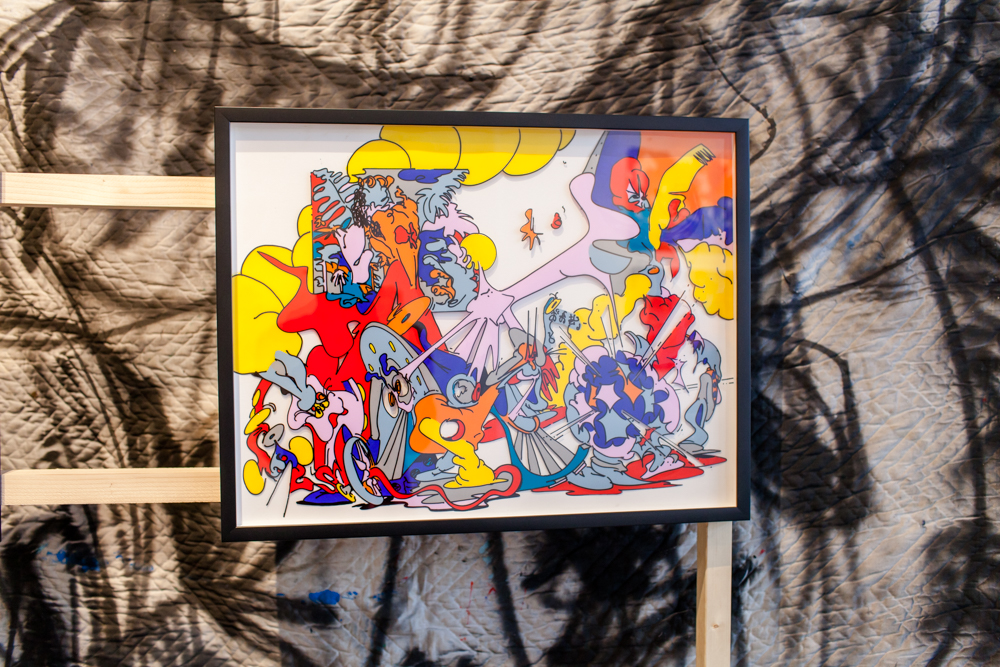