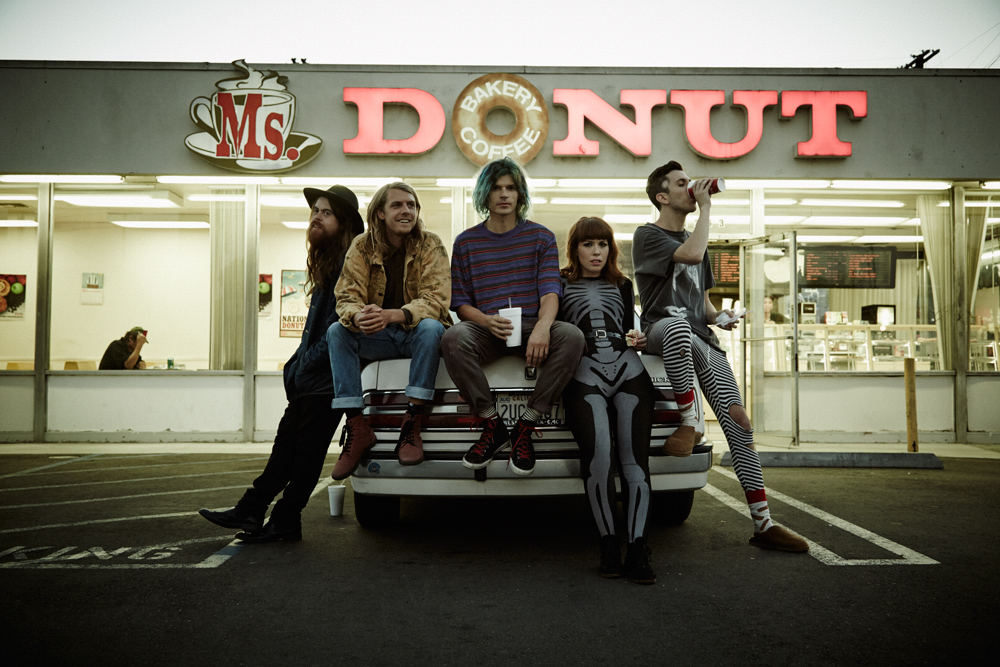 A name likeGROUPLOVEinspires the imagination to run wild, to wander back to the time of Woodstock or some free-spirited hippie commune where women weave flowers into their braids and men don long, ceremonial robes while brewing a giant clay pot of mushroom tea. (Not in a cult-y way, or at least not in a bad cult-y way). When my childhood friend and his brother first told me, three years ago, that they were starting to manage a band called GROUPLOVE, I was excited for them, but simultaneously skeptical. In this town, stories about a former elementary school classmate trying to break into the entertainment business are about as prevalent as misguided movie sequels chronicling aging posses of post-grads. Nevertheless, I wanted to support their new endeavor, and so back in May of 2010 I headed to El Cid for their very first performance. I remember the venue was packed, sold-out apparently, and thanks to the wonders of technology, the audience had already memorized the lyrics, singing along to what would become the band’s first chart-climbing single, “Colours,” a contagiously catchy anthem of brazen individualism that makes you want to dangle your head out the car window and cruise the PCH with your top down (the top of your car, I mean). 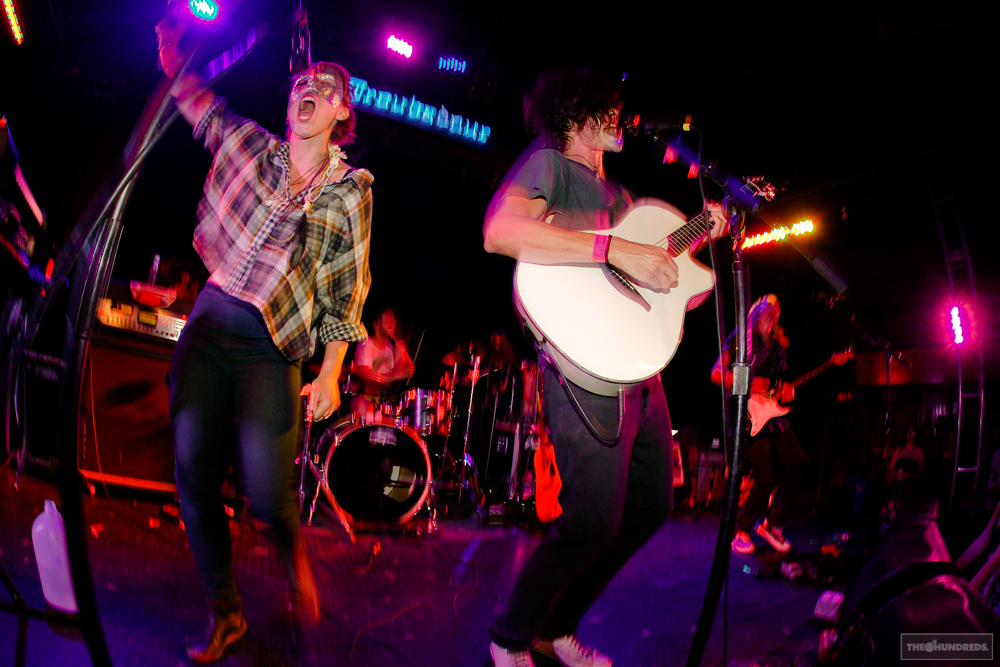 Oh yeah, before I forget, GROUPLOVE is Hannah Hooper (vocals, keys), Christian Zucconi (vocals, guitar), Sean Gadd (bass, vocals), Andrew Wessen (guitar, vocals), and Ryan Rabin (drums). Though some of the members knew one another from New York and Los Angeles before forming as a band, they officially came together after finding their respective ways to an artist residency in Greece to spend the summer making music and being free from the burdens of scrambling to piece together rent in the big city. I suppose you could say that the group is the fortuitous love child of an incurable case of wanderlust and escapism.

That very first show at El Cid Was played with an untainted enthusiasm and a pure lack of inhibition that I suspect can be credited to that formative time in Crete. On stage, they bantered like a quirky little family. It didn’t come off as contrived or pre-packaged, because a family is what they’d grown to be. It’s been two years since the release and subsequent success of their first albumNever Trust A Happy Song, andin just over a month (September 17th), their second record,Spreading Rumours, is set todrop. To mark the occasion, they will be embarking on the SeeSaw Tour, 11 cities, two nights in each place, the first at a mainstream venue and the second in a more intimate, unconventional space. It’s an effort to reconnect with their roots – to personally interact with the crowd in a way that large stadiums don’t allow performers to do. I caught up with singer Christian Zucconi post-touring (via email) for this mini interview. For updates, you can follow GROUPLOVE on Instagram, here,and catch them if you have good connections and/or a scalper, at one of these mostly soldout tour dates. 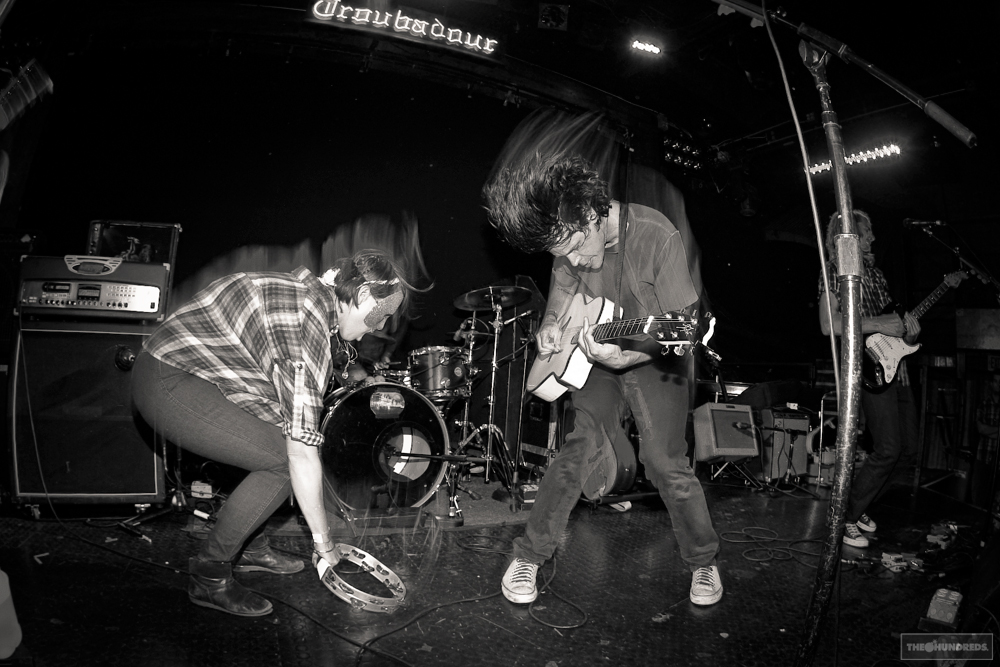 Christian: Feeling good, just got back to LA from the Osheaga Festival in Montreal.

So, everyone knows the impossibly romantic story about how Grouplove serendipitously met and formed at an artist colony in Greece, but what’s something people don’t know about the early days of Grouplove?

Hannah had never been in a band before, nor was she thinking she’d ever be in one after we left Greece.

Would you say Grouplove is more than just a band name? Would it be a stretch to call it a way of life?

Does it, the name, have anything to do with, you know, group love, like, in a sexual sense?

A lot of people tell us they make love listening to our music. 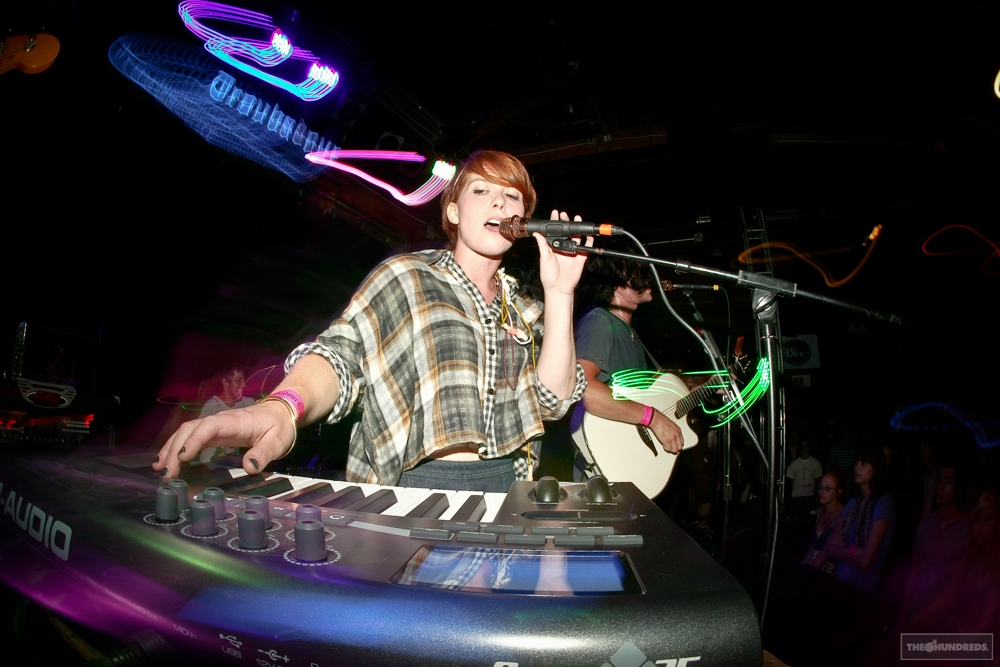 Was it instant harmony when you guys started playing together, or were there any initial hiccups/violent incidences?

It was pretty much instant harmony. Once Sean and I threw plates at each other, but we laugh about that now.

What do you remember about your very first show, which, by the way, I think I was in the crowd for?

It was sold out! And we played every song twice as fast as we were supposed to.

What’s the best part about touring? How do you keep from going batshit crazy on the road?

Best part about touring is getting up onstage every night and living in a heightened emotional state through the music and the reciprocated energy from the audience. If it wasn’t for that, we’d go batshit.

I’ve noticed some eccentric stylistic and wardrobe choices amongst the group members. Ryan is really into long johns, while Hannah has a pension for Victorian gowns and skeleton onesies, and you, Christian, seem to have a new hair color every day. What’s the fashion inspiration for the group? Is it every man/woman for his or herself, or do you guys try and present a unified front?

I think we’re all such unique individuals that through the chaos we somehow bring the unity through our fashion, our movements, and our collective ability to let go. It’s a show, it should be fun to look at it!

Your video for “Ways To Go” features a dictator character who basically changes his whole tyrannical style of ruling due to the uplifting quality of your music. If you could bring your music anywhere, and use it for any kind of good, what would you do with it?

That’s what we’ve been doing, bringing it everywhere we can, as much as we can. Together with our audiences we all lift up and elevate for over an hour and a half, and when we come back down, we’ve all changed, even if just a little. Over time that change slowly grows and makes us and those who experience us more unified, and at peace. Music is medicine, and feeling ALIVE during it satisfies the soul in some unexplainable way. We want people to hold on to that feeling, and let that override the tendencies to get satisfaction from all the negative things that surround us every day.

Tell me about your upcoming “Seesaw Tour.” What inspired you to want to do small acoustic shows the day after you play big, sold out rock concerts? Craving the intimacy?

Yeah, originally we were gonna call it “Let me see your face tour!” We want people to get to know us in the “purer” sense of the songs, without all the loud.That’s how we all hear the songs before we go into the studio to “produce” them.

Your new album is called “Spreading Rumours.” Are there any rumours you want to start spreading about it?

Captain Hook came by a lot to hang with us.

What’s the first thing you do when you get back to LA after a long touring stint?

Smoke a fat ass joint and mediate on the word reflection.