From Dirt to Dust :: Stephen Roe on Shooting a Skateboard Film in Mongolia

Last summer, in a strange twist of fate, I was flown to Mongolia to write a book following the adventures of a handful of European pro skaters Sylvain Tognelli, Jerome Campbell, Deshi, Phil Zwijsen, Joseph Biais, and Igor Fradin. My goal was to follow up on the first book put together ten years ago by photographer Bertrand Trichet.

The concept of the new book? To additionally send an architect and one non-skate photographer to marvel at the country’s landscapes, cities, and drainage ditches, in an attempt to tell the tale of the extremely preoccupying “Westernization” of Mongolia, using skateboarding as a tool for analysis. Adventures, of course, ensued.

Pompous intellectual goals aside, two things really mattered: pro skater and filmmaker extraordinaire, Stephen “Rogie” Roe, of Heroin videos fame, shot an amazing 25 minutes documentary about the adventure. The film, titled Out of Steppe, will be screened this Thursday, January 11, at Mission Workshop in LA. I will also be present to sign our book, From Dirt to Dust, and will be on panel in a thrilling Q&A on whats it’s like to take a dump in a 6 ft deep hole in the ground while balancing on two rafters, in the rain, at night. But that’s for Thursday.

For now, let’s see what Stephen Roe had to say about the epic three week journey into Mongolia.

“OUT OF STEPPE” Trailer from Carhartt Work In Progress on Vimeo.

Having parts in Heroin Skateboards videos, albeit highly prestigious, doesn’t necessarily lead everyone to becoming a highly sought-after film director—what happened?
Well, as a teenager, I guess I became a bit socially distant for a few years; just completely obsessed with skateboarding. But when I wasn’t skating, I was nerding out about film and cinematography quite obsessively too, and I guess it just developed from there. There was never really any career decisions involved; I still don’t think I’ve ever made one of those… It all just happened organically really, and continues to do so. I have dabbled with making skate videos, and I did edit the Heroin Video, Video Nasty, but generally, I’ve kept film and skateboarding separate. 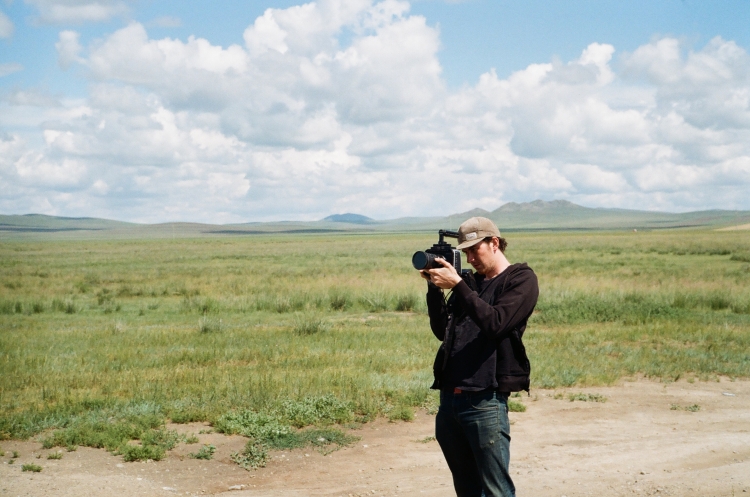 What was your biggest assumption about Mongolia that got proved wrong, if any?
I was hoping for everybody to be on horseback, wielding a massive golden eagle in one hand and a sword in the other while constantly throat singing. That wasn’t the case. In truth, Mongolia had been top of my list of places to visit for a number of years and I’d done my research so I suppose my assumptions weren’t too far off-target.

So after we spent three weeks in Mongolia, how would you describe the country to someone who has never been there?
Riddled with contradiction, spare, beautiful, chaotic. I don’t know, most adjectives seem to be fitting. I’d encourage them to go themselves. 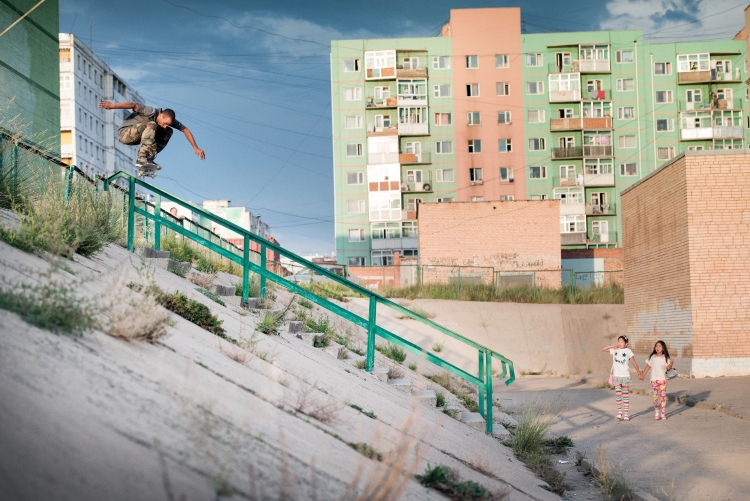 What is a Shanz?
A Shanz in a traditional Mongolian musical instrument—kind of a 3 stringed guitar with a really long neck and an oriental sound… Not all that impressive individually, but if you put three of them together some sort of cosmic alignment occurs and something special happens…

Which led us to your coincidental encounter of the band Shanz 3...
On one of the first nights of the trip in Ulanbataar, we ended up in a nightclub, which was an experience in itself—fights kicking off in every direction and terrible dubstep music. I was fairly over it pretty quickly and was kinda wanting to leave until suddenly it all went quiet and these girls come onto the stage and proceed to blow my mind. They were basically playing along to ABBA and The Beegee’s classics with this metronomic swaying dance thing going on. I was in love… I’m still in love. Mouth wide open.

What song would you like them to cover next?
Anything! They can do what they want in my mind. Play and sway girls, play and sway… It turns out that they’re actually a really big deal in Mongolia.

What were your favorite, and least favorite things about Mongolia?
I’m pretty fond of the outdoors generally, so I was pretty much loving every minute of every day. There is a real problem with alcoholism in Mongolia; I’m not going to go passing judgement on that now, but it is quite apparent. 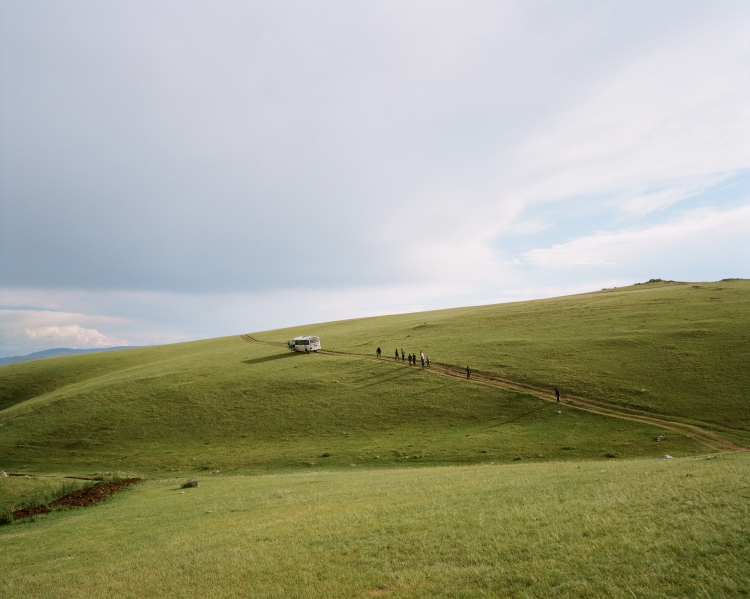 Usually, a camera, in certain countries, turns into a magnet for weirdos of all sorts—any encounters like that on that trip?
We were filming a line with Jerome, and some workman in a cowboy hat comes over and picks up someone’s skateboard and starts trying to have a go. He was absolutely fucking loving life right there and then, laughing his head off… and actually managed to learn to skate along ridiculously quickly so I filmed a little line with him—three pushes and hysterical laugher.

Can you describe a little bit what happened between Joseph’s face and businessman’s suitcase?
In truth, I didn’t actually witness it myself, but from what I gathered a drunken businessman didn’t particularly like Joseph skating near him, so like any level-headed drunkard he felt the need to smack Joseph in the face with his briefcase. It almost all erupted into Wrestlemania on the streets, but thankfully, common sense eventually prevailed.

Also, besides filming and skating, it turns out that you had to provide psychological help for our guide, Misheel, who wasn’t at ease with his inner country side...
[Laughs] Yeah, poor guy. We’d been on the road for 12 days or something and it had taken its toll on him a little. He was a bit of a city slicker with a penchant for a slick suit and the finer things in life rather than sleeping rough, spending endless hours in a bus on the sketchiest excuses for roads that you can imagine, and then having to burn cow shit to keep the mosquitos at bay.

So towards the end of the trip his enthusiasm had completely run out and he became a bit frosty and pissed off. It all came to a boil when he tried to kick me out of a hotel room so he could be on his own, which I wasn’t prepared to do as I was up late offloading and backing up footage every night, so it all got a bit heated and he started threatening me with violence. I was just like, “Look…” and I explained that I understood what he was going through and that he’d be home in a couple of days, so to just try to enjoy the journey as much as possible. That instantly did the trick and he gave me hug and went to bed. After that, his enthusiasm was rejuvenated and peace was restored. I actually learned news on that very same day of a death in my family, so I was feeling pretty fucking homesick myself. We were in the same boat, in a way. 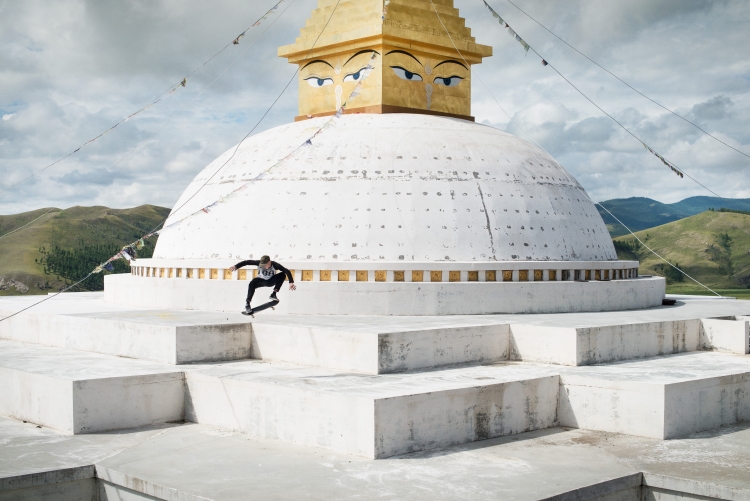 What was your favorite part to film/edit in the film?
All the elements where we were away from the big cities, out trying to find stuff to skate in the middle of nowhere. I have this very distinct memory of Sylvain skating a flat bank that’s part of a dam. Behind the spot is just this insane mountainous landscape, to the left is a river with kids fishing, to the right are wild horses running through the steppe, next to them is a herd of goats that a shepherd is tending to, then you look up and there are golden eagles flying overhead. It was just this completely insane situation… and we’re all here just because of skateboarding. Unforgettable. 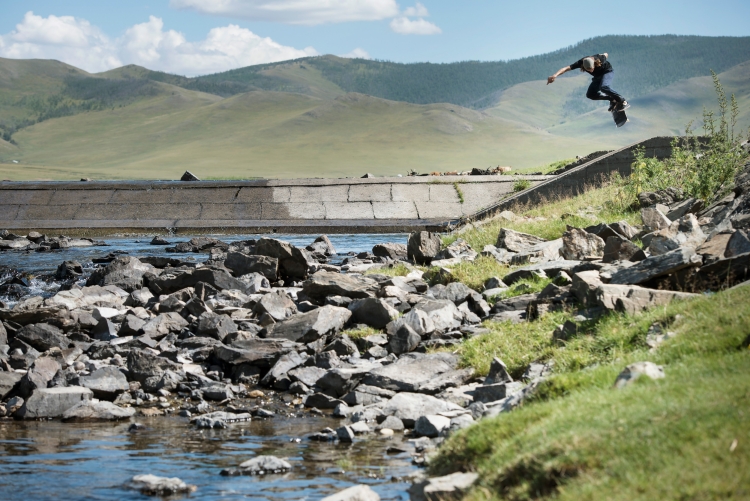 Will you go back?
I’d like to think so yeah. I’d like head even further out into the wild. In the winter too. I’d leave the skateboard at home.

Be sure to check out the trailer for Out of Steppe here and attend the screening this Thursday, January 14th, at Mission Workshop LA. Seb Carayol
Seb catches up with the founder of Heroin Skateboards, FOS, on why he loves Starbucks and overpatched pants, his pirate radio show on Kchung, illustration, and guns. Rise of the Independent Skate Brand :: Josh Stewart of Theories of Atlantis

Leland Ware
How Josh Stewart's initial distribution efforts for his critically-acclaimed "Static" video series escalated into Theories of Atlantis, a company that now distributes core skate brands like Polar a... Rainey Cruz
Rainey Cruz talks to the mystery artist/skater behind Paper Skaters about his unique approach to wheatpasting, which involves fusing the art form with actual skate photography for an entirely new m...
HIDE COMMENTS