One of the Most Legendary Dodgers Moments Should Have Never Happened

When baseball season is fast approaching, you wouldn’t know it here in Los Angeles where the weather always feels like it’s spring training. But in most other locales around the country, the moment pitchers and catchers report, it’s a signal that the winter doldrums will soon be replaced with the crack of the bat, guilt-free mid-day beers, and the steady trot toward a pennant race at the end of the summer.

Although the Dodgers have been a staple in Postseason play for the last three seasons—going as far as the NLCS in 2013—the City of Angels hasn’t had the good fortune of celebrating a World Series title since 1988, when acts like George Michael, Michael Jackson, Billy Ocean, and UB40 were dominating the Billboard charts. For many, that may seem like a lifetime ago. For others, your lifetime may not have actually started the last time the Dodgers ruled the city. 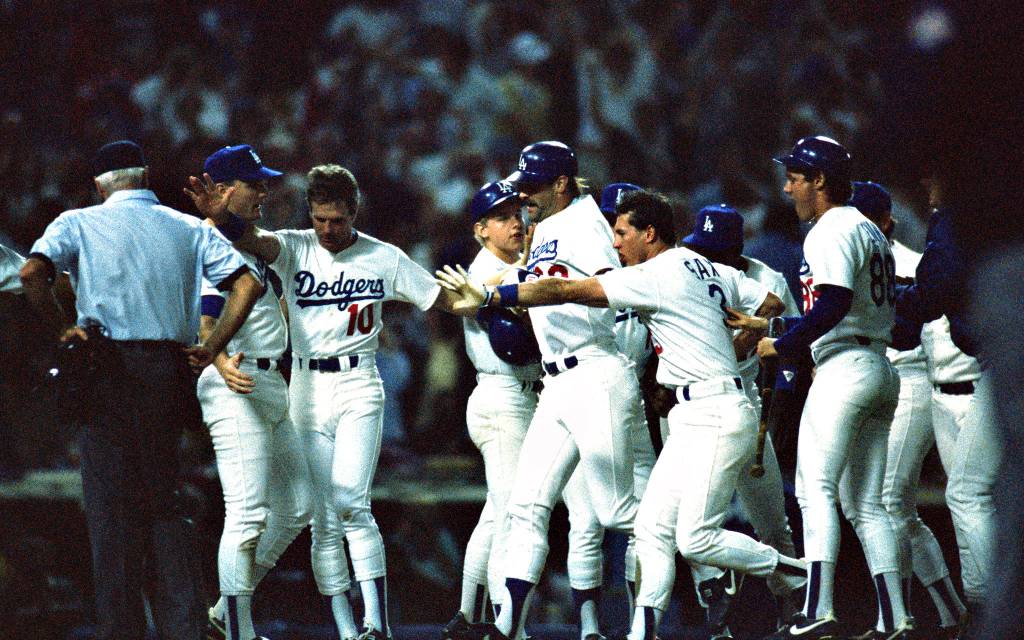 Legendary broadcaster, Bob Costas—who has called everything from the World Series to the Olympic Games—referred to the Dodgers lineup for the Fall Classic in 1988 as one of the “worst in World Series” history. Not only was their appearance against the Oakland A’s improbable, but just getting to the pinnacle of baseball Postseason play was as logic-defying as staring into a concrete abyss marked “LA River.”

“Oh, man, you shoulda heard ’em,” Rick Dempsey said in response to Costas’ comments before the start of Game 4 of the World Series. “I was in the trainer’s room, and I heard a big growl. I came out and said, ‘What happened?’ Someone said, ‘We’ll show him what weak is!'”

Prior to their magical 1988 campaign, the Dodgers had enjoyed what could only be described as a bi-polar-esque existence. Between 1974-85, they had won four National League pennants and a World Series championship in ’81. However, in 1986 and 1987, they posted back-to-back woeful seasons of identical 73-89 sub-par baseball records.

Perhaps the biggest black eye for the Dodgers franchise occurred in the 1987 season when Ted Koppel and his Nightline program decided to pay tribute to the late Jackie Robinson in advance of the 40th anniversary of his historic April 15, 1947 debut for the Brooklyn Dodgers. They turned to then Dodgers General Manager, Al Campanis, for comment.

“We learned [at the time] that Campanis had roomed with Jackie Robinson,” Koppel told ESPN’s Jeremy Schaap, “and we thought, ‘This will be perfect.'”

After paying tribute to Jackie Robinson’s playing career, Ted Koppel asked Al Campanis about the lack of African-American leadership in roles like manager and general manager.

“I truly believe that they may not have some of the necessities to be, let’s say, a field manager, or perhaps a general manager,” Campanis said.

Although usually stone-faced and resolute, it was clear that Campanis’ statements had even rattled Ted Koppel. Not surprisingly, Campanis—who himself was known to champion Jackie Robinson when it was not a popular sentiment—was fired two days after his remarks.

When the 1988 season rolled around, it was clear that the Dodgers would have to do something incredible to erase the stain that Campanis had left on the franchise.

One of the biggest moves of the off-season included the signing of Kirk Gibson from the Detroit Tigers. New General Manager, Fred Claire, and long-time Manager, Tommy Lasorda, hoped that the veteran slugger would help valuable pieces already on the roster like Steve Sax, Pedro Guerrero, Mike Scioscia, Fernando Valenzuela, and Orel Hershiser. However, fans were lukewarm on the signing because Gibson had only made one All-Star team during his career and didn’t come with the name recognition of other people on the market like Graig Nettles or Jack Clark.

“I was with the Tigers my whole career and went through collusion and I had to stay there,” Gibson remembers. “When I left Detroit, a lot was said about me. They attacked me and my character and said things about my family. I remember my parents, especially my dad, defended me. Any father or mother would do that, but I told them, ‘Don’t worry about it, we’ll have our day.’”

Whether or not Kirk Gibson had soothsayer-esque qualities is debatable, but he did follow through on his promise to elevate the Dodgers’ play. Not only did the Dodgers capture the division title, but he won the National League MVP after hitting .290, 25 home runs, 76 RBIs, 106 runs scored, and 31 stolen bases—beating out other stars with superior stats like Darryl Strawberry and Kevin McReynolds of the New York Mets, Andy Van Slyke of the Pittsburgh Pirates, and Will Clark of the San Francisco Giants.

“This never was a goal, but it certainly is an honor,” Gibson said. “My goal was to win the world championship.”

“It’s justified,” McReynolds said of the MVP outcome. “Gibson was definitely a big morale boost for the Dodgers. There hasn’t been a case where it has been more evident in the last few years. He turned around a team that had been struggling.”

Entering the playoffs, the Dodgers were viewed as underdogs against the New York Mets who finished the regular season with a staggering 100-60 record—having also won the World Series two years earlier.

Despite a paltry .154 batting average during the NLCS, Kirk Gibson did manage to hit home runs in Dodgers victories in Games 4 and 5, but was slowed by sore knees. However, his availability for a potential World Series matchup with the Oakland A’s was put in serious jeopardy when he suffered a severely-pulled hamstring while sliding to break up a double play at second base during Game 5. 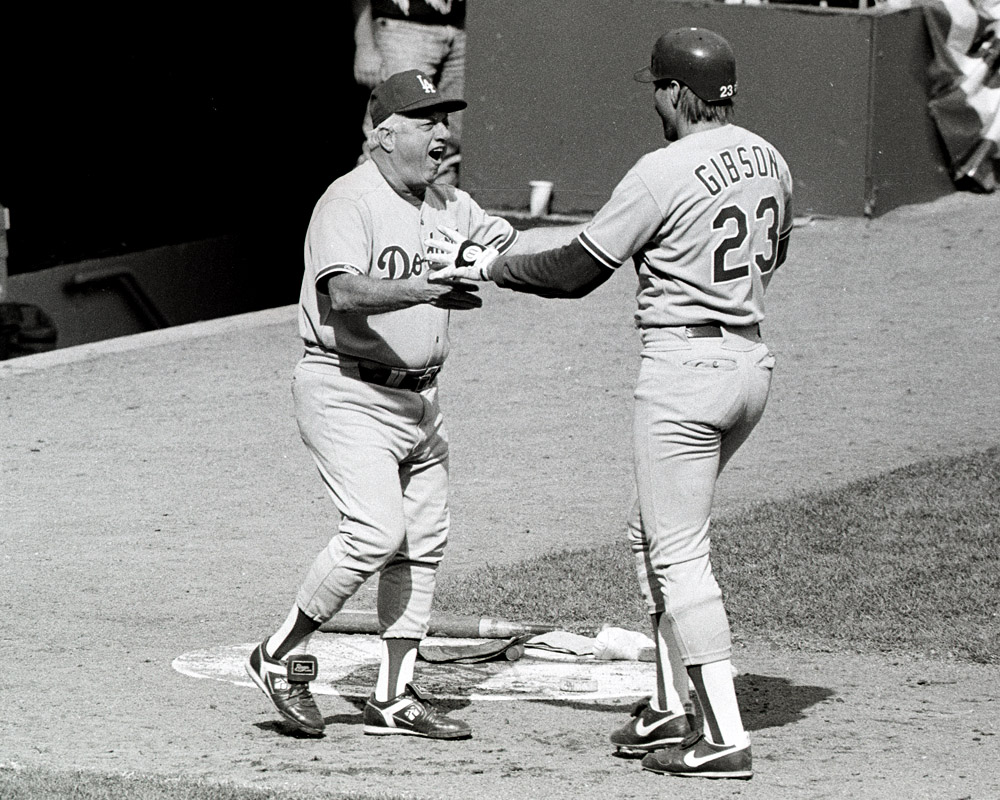 Dodgers Tom Lasorda congratulates Kirk Gibson during his three run home run against the New York Mets during Game 5 of the NLCS Monday, October 10, 1988 at Shea Stadium. The Dodgers defeated the Mets 7-4.

Ultimately, Gibson played for the remainder of the series, but was forced to watch the Dodgers celebrate from the bench after a Game 7 win when he was removed from the game in third inning with hamstring problems.

The Oakland A’s had gone 104-58 during the regular season and represented the first of three straight years that they would appear in the World Series. After sweeping the Boston Red Sox, their matchup with the Dodgers made it seem like the upstarts from Los Angeles had little chance—especially since no one believed Kirk Gibson would be able to play in any capacity in the series.

“I remember coming on the air and saying, ‘First item of business: Kirk Gibson will not play tonight,” Bob Costas remembers. “We had been told he was out. That was how we set the stage for Game 1.”

With the Dodgers down 4-3 heading into the ninth inning of Game 1, not only did they have to contend with the loss of Gibson, who remained in the clubhouse, but also the rocket arm of A’s reliever Dennis Eckersley, who had converted 45 saves during the regular season and was every bit as much of a shut down reliever as baseball has ever known. 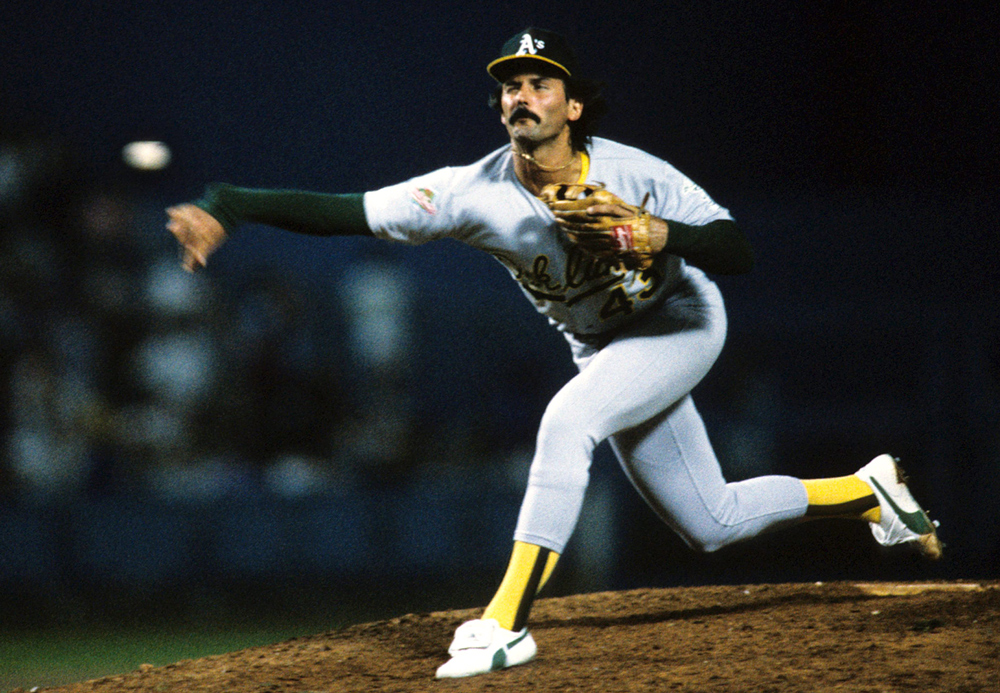 Leave it to none-other-than legendary Dodgers broadcaster, Vin Scully, to coax Gibson into the game despite being physically unable to play.

“’Is Kirk Gibson in the Dodgers’ dugout?’” Scully asked the TV audience. “The answer would appear to be ‘no.’”

“I was sitting there, and, when Vin said that, I stood up and said, ‘My a–!’” Gibson says. “It was time to go get dressed. That’s not to say I wouldn’t have gotten dressed if he hadn’t said it, but he did say it, and I was vocal about it with whoever who was around me at the time.”

Naysayer Bob Costas was one of the first people outside the Dodgers organization to suspect that Gibson might come in to pinch hit against Eckersley.

“At that time, broadcasters couldn’t be in the dugout, so I was breaking the rules, but I was in the corner,” Costas says. “As I’m standing there, I can hear Gibson hitting off a tee, and I walked down the tunnel to make sure it was him, and it was. He’s grunting with each swing. Thwack! Ugh! Thwack! Ugh!”

After Mike Davis earned a walk, the stage was set for Gibson to hit in the ninth spot with two outs.

Like any showdown cultivated by the minds in Hollywood, Gibson stepped into the batter’s box to square off against Eckersley without the ability to generate any power from his legs due to his bum hamstring.

“The crowd… I can never explain it,” Tommy Lasorda recalls. “The emotion, the reaction of that crowd that night. I’ve been here a long time, I’ve never seen anything like that.”

After fouling off the first two pitches, Eckersley viewed Gibson as being “feeble.”

Then, Mike Davis swiped second base. Suddenly, the Dodgers didn’t need a Herculean effort from Gibson. A base hit would tie the game.

“When Mike Davis finally got to second base, I thought, ‘just dink it over the shortstop, just score him and tie it up,’” Gibson remembers. “That’s really all I was thinking at the time. I was just thinking about keeping the inning going the whole at-bat.”

Gibson eventually worked the count to 3-2. Eckersley opted for a backdoor slider, and the injured MVP didn’t miss.

Twisting like a snake, the swing was all arms and off one leg, but connected square with the sweet spot of the bat. The ball sailed like a missile into the right field bleachers. Even trotting around the bases in exultation seemed hard for Gibson to do.

As Vin Scully is known to do, he didn’t muddy up the moment with clichés or over analysis. Rather, he let the roar of the crowd do all the talking. Gibson’s heroics didn’t necessarily win the Dodgers the World Series. It was only Game 1. But it should have never happened. But this is Hollywood—we’re known for writing the endings however we see fit. 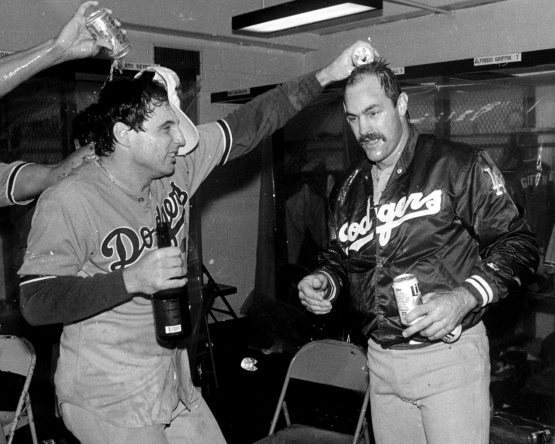 How the Los Angeles Dodgers Birthed the “High-Five”

Alec Banks
"His impact on the game of baseball—both fun and heartbreaking—will and shouldn’t ever be forgotten." How the Dodgers' Glenn Burke allegedly invented the high-five in 1977. Alec Banks
"Los Angeles is a strange place. We pray for rain, and instead residents end up with a football team and a proposed billion dollar football stadium in Inglewood..."
HIDE COMMENTS