THE ARTIST DENNIS MCNETT ON WOLFBAT & OTHER STORIES

Dennis McNett doesn’t just exhibit his work in galleries – he parades it down the street in the shape of a winged wolf or a 26-foot-long Viking ship. But whether it’s marching down the street next to costumed dancers and musicians or surrounded by white walls inside a gallery, McNett’s work is fascinating.

The artist creates meticulous wood and linocut works on paper, hand-carved panels painted in acrylic, papier-mâché masks, and freestanding sculptures papered in prints, which are all artifacts of his personal mythology. This mythology is rooted in Old Norse prose, particularly in the story of a giant wolf named Fenris, as well as the freewheeling culture of the 1980s skate and punk rock scenes.

In this interview with The Hundreds, McNett discusses his own mythology, skate and punk graphics, GWAR, and his current exhibition at Fifty24SF in San Francisco, which is on view through September 28. Photographer Evan Thompson attended the show’s reception on August 16 to shoot the photos below. 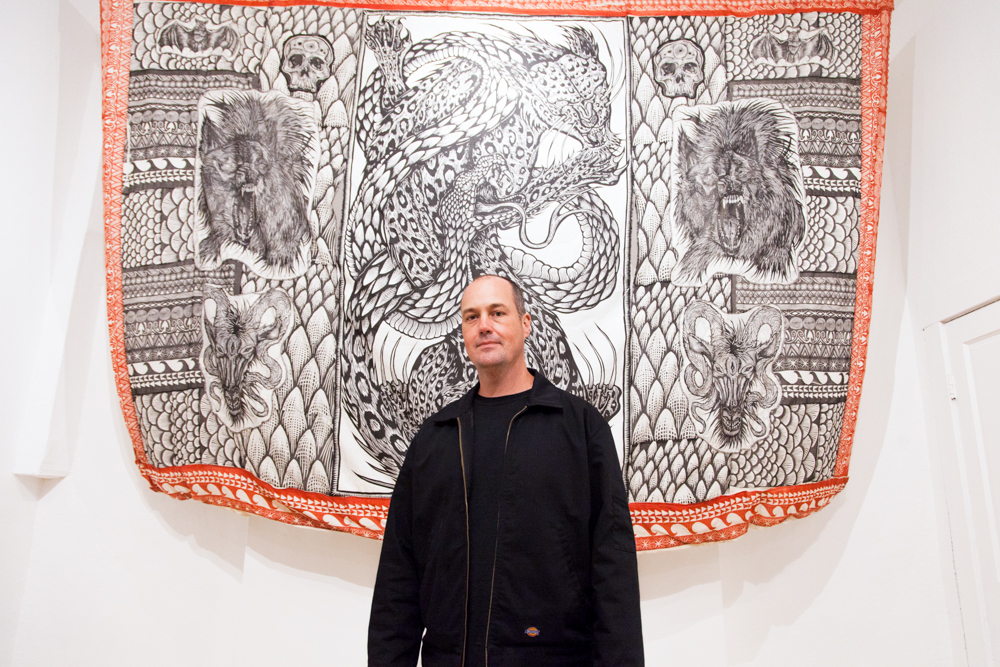 I went to Denmark several months ago, and came back semi-obsessed with Norse mythology. When did you become interested in it? What appeals to you about Fenris?
I read a lot of Norse Mythology in 2006 and some occasionally afterwards. I’ve always been obsessed with wolves and here was Fenris, a giant wolf fathered by giants and bound by the gods. The gods bound Fenris and put him beneath the earth based on a premonition that he could one day harm them. Without getting into extensive detail and explanation, I viewed Fenris as you/me/creative people/free spirits/etc., and the gods as people in power/corporations/financial institutions/etc. who felt it was necessary to put into place a system we are bound to. 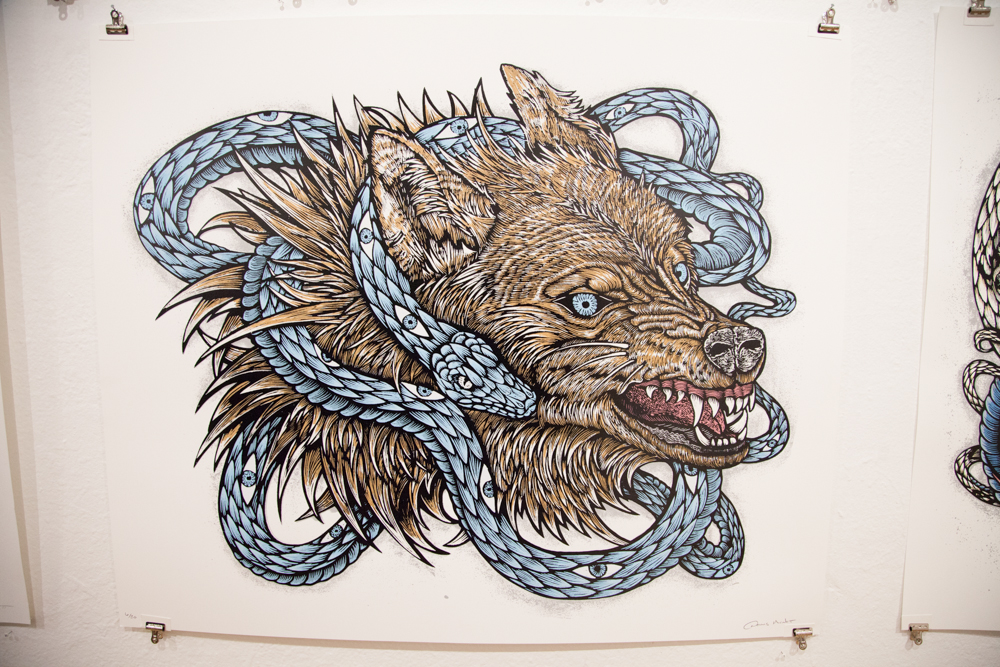 In 2007, you paraded Wolfbat, a character based on the Fenris myth, down West Broadway, and continue to use this character in your work. What do you want people to see or realize through Wolfbat?
I am actually working up a way to convey the story and idea of the Wolfbat more clearly. It’s basically a made-up mythology based around the resurrection of Fenris. During Ragnarok (the battle of the gods and giants ending the world), Fenris breaks his bonds, hunts down Odin on the battlefield and devours him. Odin’s son then killed the wolf. I re-wrote the story so that Fenris sister Hel survives the battle and waits in the underworld, until things settle, to resurface. She was the only character in Norse myth that had the power of resurrection. So I wrote that she found her brother’s mangled carcass on the battlefield and resurrected him with the wings of a bat so that he could fly the earth and destroy the gods. So to answer your question, it’s a character/mythology I use to explain the world, or cleanse an area of something I find negative or unjust, or just to make sense of things I find illogical, or something to bounce ideas onto or out of... Like I said I’m still working on a way to make all this more clear. 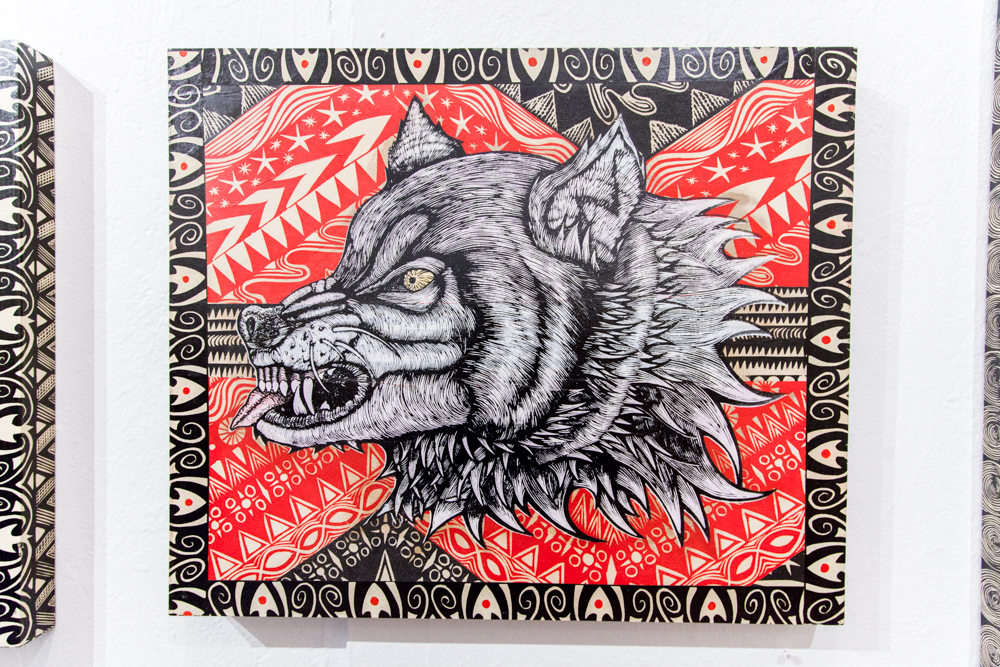 David Brockie of GWAR just passed. What did you love most about GWAR? What do you think people can learn from them?
I don’t think people know what a huge loss Dave Brockie was. GWAR, in my opinion, is fucking genius. Here you have a group of artists and musicians who found a way to collaborate with one another, interact with their audience and incorporate music, graphics, storytelling, theatrics, etc. Make their own album covers, videos, and costumes. Have an ongoing narrative that is a dance between political and just fun/funny and managed to do all of this since 1980 – 30 years! Even if their aesthetic is not for you, you have to respect the genius and longevity they have had. 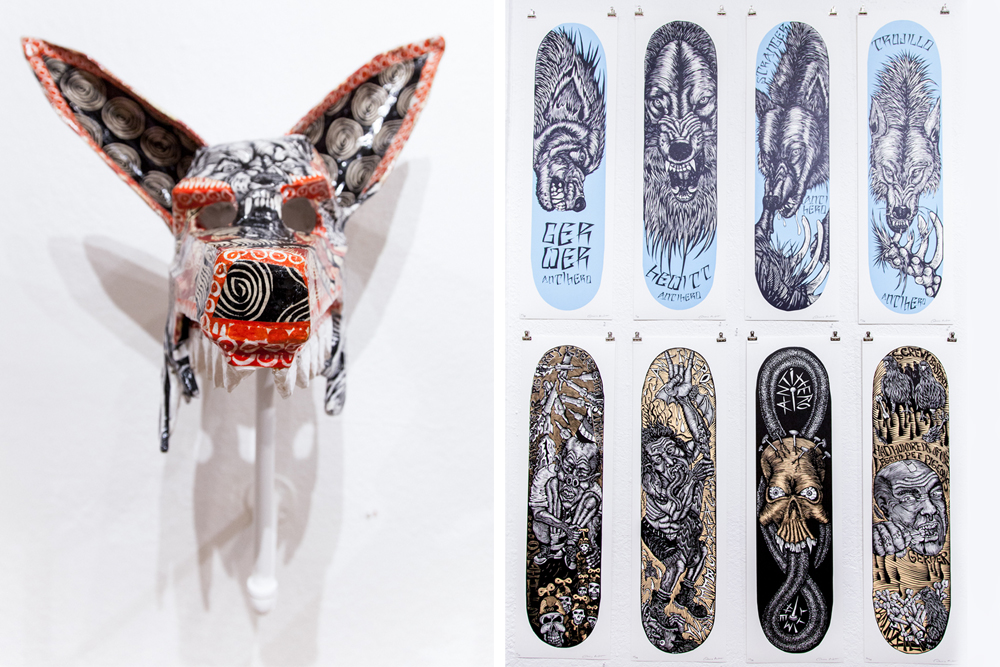 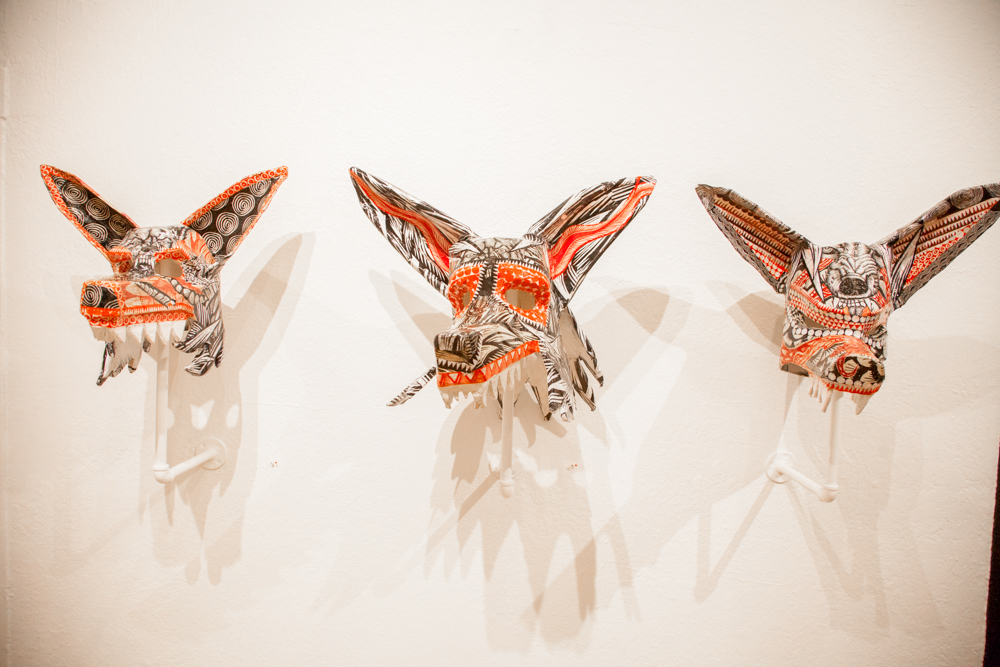 How has the 1980s skate and punk scenes influenced your work?
That time period was special to me. The flavor of all of it was free and wild. Raw. The graphics of Courtland Johnson and Pushead were delicious and I would try to draw them on my notebooks. Vert ramps were gnarly and the pros of this time were animals doing superhero tricks. Street skating was new and people were just making it up as they went. The punk graphics and music were the pulse of it all.

What works are featured in your current exhibition at Fifty24SF?
I was asked to do the show at Fifty24SF fairly unexpectedly and last minute, so as I was packing to go out to San Francisco for another project, I was also grabbing anything in the studio I could fill the walls at the gallery with. So, it’s a lot of limited-edition prints, a Viking ship sail, some masks and other small affordable works. It was fun to just fill the space and everyone over there has been super great. 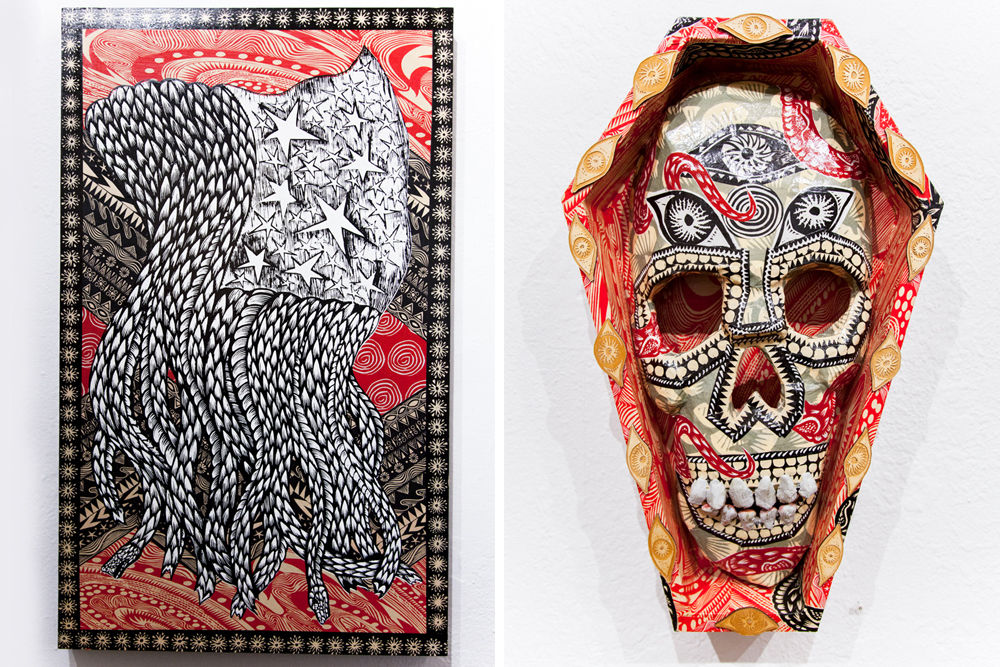 What are you working on now? What’s next for you?
I have two visiting artist gigs coming up, one in Indiana and one in Tennessee. For the one in Tennessee, I am building a life-size sculpture of an elephant named Big Mary who was hung by the townspeople sometime in the 1920s for killing the animal trainer.

Best piece of advice?
All you have is your time, how you spend it and who you spend it with. The rest is temporary and you aren’t taking with you when you go.