Darq E Freaker has been making his sui generis brand of UK grime, which melds elements of hip-hop, video game melodies, and ‘90s rave music, since he was 16 years old. Now 28, the Peckham-born artist/producer began crafting tunes when a childhood friend hooked him up with a copy of FruityLoops. While Darq initially saw music as a hobby, he was soon hearing his frenetic tracks played at raves and clubs, getting paid, and collaborating with big names from Danny Brown to London Grammar. Before he knew it, music was his career. For the past two years, he tells me, his average day involves exercising, answering emails, and then making music until it’s time to hit the town for the night—the ideal balance between the introversion necessary for creative proliferation and the raucous lifestyle that animates his music. When I ask Darq about his vices, he sheepishly admits that he’s a “bit of a party boy.” I caught Darq on the phone just before he embarked on a North American tour to promote his upcoming ADHD EP. Read our conversation below (edited for brevity), in which we discuss grime as a lifestyle, the differences between British and American audiences, and how he wants to pass his swag onto his kids. 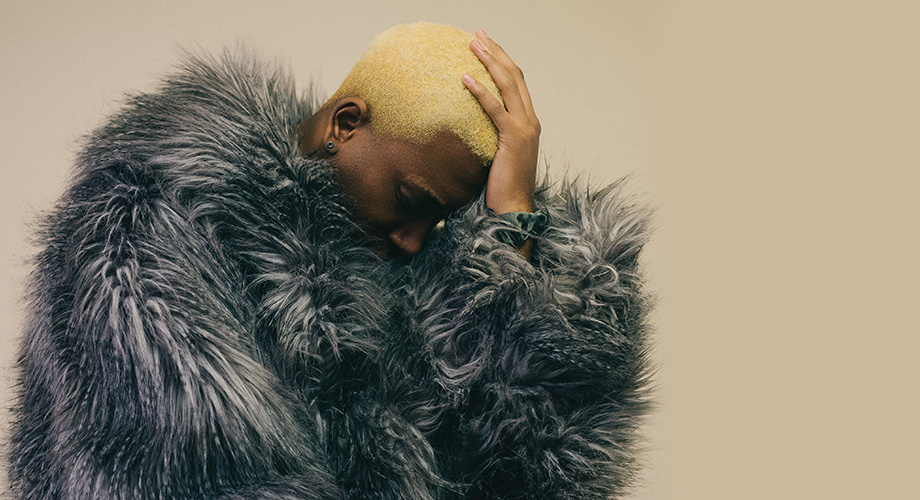 ANNA DORN: So you have a tour coming up?
DARQ E FREAKER: Yeah, like a mini North American tour. I have some dates in New York. Some dates in Texas. LA. Miami. And maybe one in Chicago.

Are the crowds different in the U.S.?
They’re different. Like in America, people are fucking on it. They go crazy.

I feel like British people play it cool a little more.
You know what? I think it’s that there’re more people in America, so there’s more appreciation for what we do. Like here [in England], it’s quite small. So if you go to an event for a specific genre or niche, most of the people at the event are aspiring to be on the stage, rather than just appreciating the music. In America, there’s like proper appreciation, like—oh my god—if you like someone.

Can you tell me about ADHD?
ADHD. What can I say about it? Like it’s a piece of music I made last year. It’s me. It’s my stuff. It’s... how can I say it? It’s like a painting I’ve painted of a time in music. It’s like nostalgic of rave music from before, infused with music I’ve grown up with. The drum pads and stuff are like hip-hop, grime-type of drum pads. But the melodies are fusion—like video game music with ‘90s rave music, like acid house and stuff like that.

What music did you grow up with?
I don’t think anyone grew up with one genre of music. Like if you grew up with a radio or TV, you just grew up with what’s been thrown at you. I wasn’t like 6 or 7 years old looking for a CD or something. Like I might have seen Coolio on TV, I’ve seen Timbaland and Missy, I’ve seen The Prodigy on TV, I’ve heard Massive Attack on the radio. There are so many things that can influence your musical taste or musical direction you decide to take. And UK music is quite cool. I’m from the grime scene, so I’ve always made grime and stuff. So people know me for grime. And maybe things towards the left of that. But I’m influenced by other things and I’m capable of other things.

“GRIME IS SUPER ENERGETIC MUSIC. IT’S ACCOUNTS OF THE LIVES OF PEOPLE IN LONDON STREETS, THE INNER-CITY.”

I loveee your song “Blueberry (Pills & Cocaine).” Can you tell me about making that and about how you got hooked up with Danny Brown?
I connected with him over the Internet. He’d done an interview for Pitchfork with another producer from Britain called Joker. Joker asked if he knew grime and he goes, “Yeah, I know grime, I know Dark E Freaker,” and he’d heard “Cherryade” before so he spoke about that song. And I was like cool, whatever. I tumbled a picture—he’d done a video in New York with Kendrick Lamar and A$AP Rocky—and I tumbled a picture from that. And he found that and we started speaking through there. We exchanged emails, Twitter, blah blah blah. I sent him a tune, he vocaled in. And from there it was a thing.

Did you enjoy working with him?
Yeah. I also worked with him on a track on his album [Old] called “Handstand.”

Were you a fan of his?
A thousand percent. Even before I worked with him.

I recently read an article in Pigeons & Planes about how American rap is really big in Europe now. Do you find that to be the case?
I think American rap is big all over Planet Earth. American rap is the template for rap for the universe. It’s the blueprint template. Everyone likes American rap. Whereas British rap is starting to get popular in America, and across the world. Slowly, I think.

Can you tell me about your collective, Nu Brand Flexxx?
Oh my god—yeahhhhhh! You see how in America, like everyone raps? In England, it’s like that with grime. Well, that was my like my group of rapping people from college. We started to make some tunes and stuff. It was a grime collective. There were loads of us, like 11 total. Some of us preferred hip-hop more, some of us preferred grime more. So we split into kind of two.

How would you describe grime?
Grime is super energetic music. It’s accounts of the lives of people on London streets, the inner-city. Well, I don’t want to say predominantly London because it’s a whole UK thing now. People giving accounts of their lives with an energy to it. It’s the same as hip-hop, but a different tempo, a different beat.

What are you listening to these days?
American music. UK grime. UK rap. American hip-hop. Instrumental music. You know what, it wouldn’t be fair for me to say any specific artists.

What inspires you when you’re making music?
I get inspired by life. Like my everyday experiences. Who I meet. When I started making music, like I’d go to a rave and hear something and I’d want to make something better, or at least as good. I need to hear my tunes loud. When I was younger, I was just making tunes and stuff and just emailing them to everyone to play. And finally hearing my stuff being played louder, hearing it be played at raves. That’s what was inspiring to me.

What was your childhood like?
I grew up in an area here you guys would maybe call ghetto, something like that. But then I started leaving my area to go to different areas to be more creative. Then I went to college and was hanging out with more middle-class people.

What did you study?
Business Studies and IT. So then I became more of an optimistic person… Learning more, travelling more. I became—not a different person, but—more enlightened to the world and stuff.

Like, do you like write stuff down, or is it more on the fly? Do work at a certain time of day or under certain conditions?
I work at any time. If something comes it my head, then I’m there—it’s happening there and then type of thing. If I’ve got ideas when I’m out, then I’ll hum them into a voice memo—you know voice memo on the iPhone?

If it’s in my brain, I have to get it out before I forget. If I come up with something and I can’t put it down somewhere, I have to keep going through it in my head so I don’t forget. If I’m out somewhere and can’t get a voice message because it’s too loud, I might go hum it on the toilet. It might sound crazy or embarrassing to someone outside of what I’m doing, but it makes sense to me.

Is music how you support yourself?
Yep. I don’t do anything else.

What do you do when you aren’t making music?
Um, I like to party a lot. [Laughs.] Ok, this is my life for the past 2 years. Wake up in the morning, go for a run, go to the gym. Come back home, do my emails. Make tunes all day until like 11 or something. Go out, party, have a really big night. Come back in, sleep, wake up, run again, and do the same thing again. Or I might have a show or something, so I might be going to the train station if it’s a show in Britain or the airport if it’s a show in Europe or somewhere else in the world.

That sounds like a pretty ideal life actually.
It kind of is. Sometimes.

What’s your favorite place to go out in London?
So many places. There’s a place called Visions that I like. It’s down the road from my house. I know the manager and shit. They’re kinda like family there. I go to The Box. You heard of the Box? There’s one in New York.

Do you see yourself living a similar life in 5-10 years?
Yes, I do. I’d just like to do the same thing. And maybe have some stability. Possibly family-wise. I guess that’s what we have to do. We have to get a family and kids.

So you wanna have kids?
Yeahhhh! I have a lot of cool stories and information and swag to pass on to someone else. Loads of clothes to give away. CJ Rucker
Amidst one of the best years for hip-hop, CJ Rucker takes a moment to round up the top 10 men and women behind the scenes: the best producers of 2015.
HIDE COMMENTS