Carving it Out :: The Wood Cut Illustrations of Denton Watts

Certain situations or specific scenarios can alter a person’s destiny. Discovery, experience, loss, heartbreaks, etc. can make us change our views on life. Graphic design school was on artist Denton Watts’s path. A place where he learned the fundamentals of design structures. But a decision to get his first ink shifted that road. His first tattoo opened up his eyes on a lifestyle that he wanted for himself. That envy became obsessive to him. “The dude had his own private studio and was his own boss and I wanted to live my life like that,” Denton says. “Once I figured out what I wanted to do, I turned full-blown hermit and focused all my attention on learning how to draw.” That choice carved out his own career path to now. Described as an illustrator/designer, Denton Watts creates his art by utilizing today’s digital tools, but with the touch of a traditional hands-on method to finalize his work. “I aim first and foremost for something that is bold and legible,” he explains. Denton Watts creates his wood cut illustrations out of Austin, Texas, with a style that can be described as having a hint of traditional American tattooing. Read our interview below, where he discusses technique, the dangers of perfectionism, and how Instagram is the main reason why he has been able to make a living off his art. 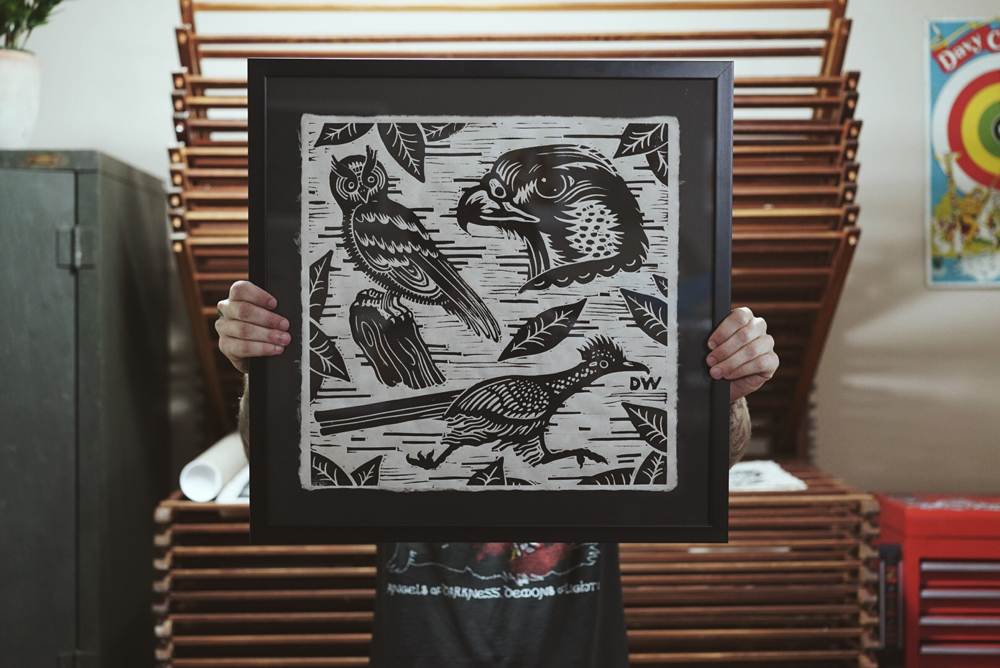 Johnny F. Kim: Wood-cut art has been around for centuries, in a now more digital world, why have you decided to take a more ancient technique versus a digital one? Denton Watts: I straddle the line between the two. I’m completely dependent upon programs like Photoshop to make my designs. My process was developed digitally and it’d take me far longer to do the same traditionally. I don’t set out knowing how the design is going to look (if that makes sense)... they’re sort of discovered after I try out a few different directions and combine parts I like from each. It’s more of a painterly approach to design where I’m cutting away, adding on, and refining. Once the design is finished, then I’ll transfer it to a woodblock and carve it because that’s a million times more interesting than a .jpeg. I like perfecting something (to my standards), and solving the design problems ahead of time so that once it comes time to cut, I’m focused strictly upon execution/craft. Are there any aspects of woodcutting that you cannot mimic digitally? I don’t think there’s anything about the woodcut aesthetic that you couldn’t achieve digitally, as long as you put time into it. I’m usually making prints because that gives me something physical to offer. 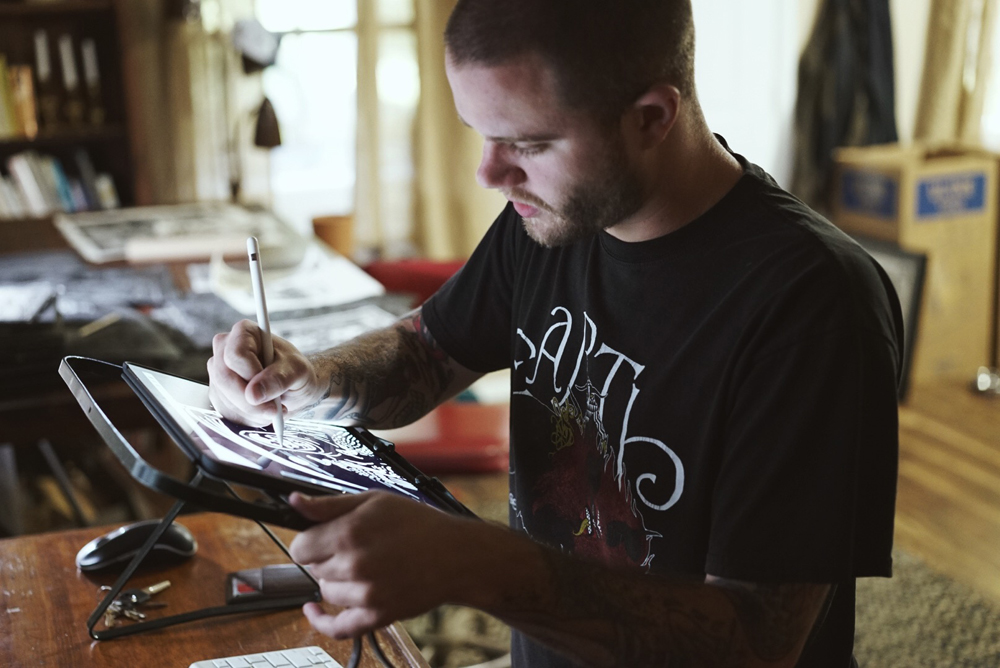 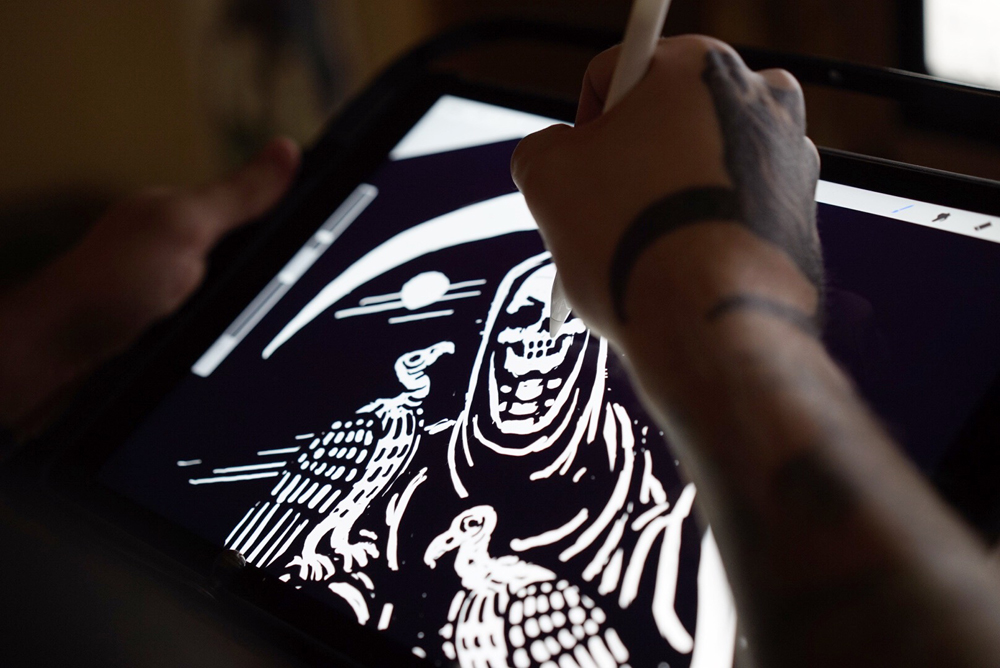 Okay, I see, but before you decide on a piece, what are your steps to achieve what you want? It all starts digital until the design is done. Then, I usually transfer it on the wood and carve it out. But is there room for error when carving the wood out? None, but they make an epoxy putty you can use to fill errors and then carve again. So when I am designing, I just kinda dive in and work something until it feels right. I try not to stay too attached to parts I have already put down and I stay open to changing things up until the end. So I stay real loose and once all the big parts work then I start to refine. It can be really hard to show a client progress because they look horrible until they’re done. 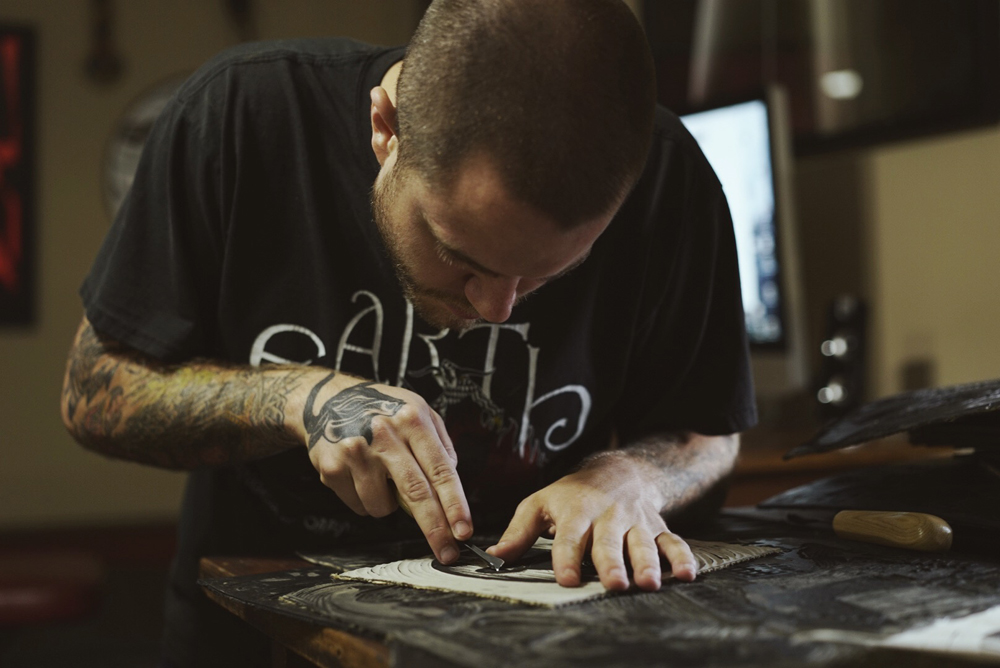 I want things to be solid and well-made, but I really enjoy folk art and think that once things become too good they start to become less good. 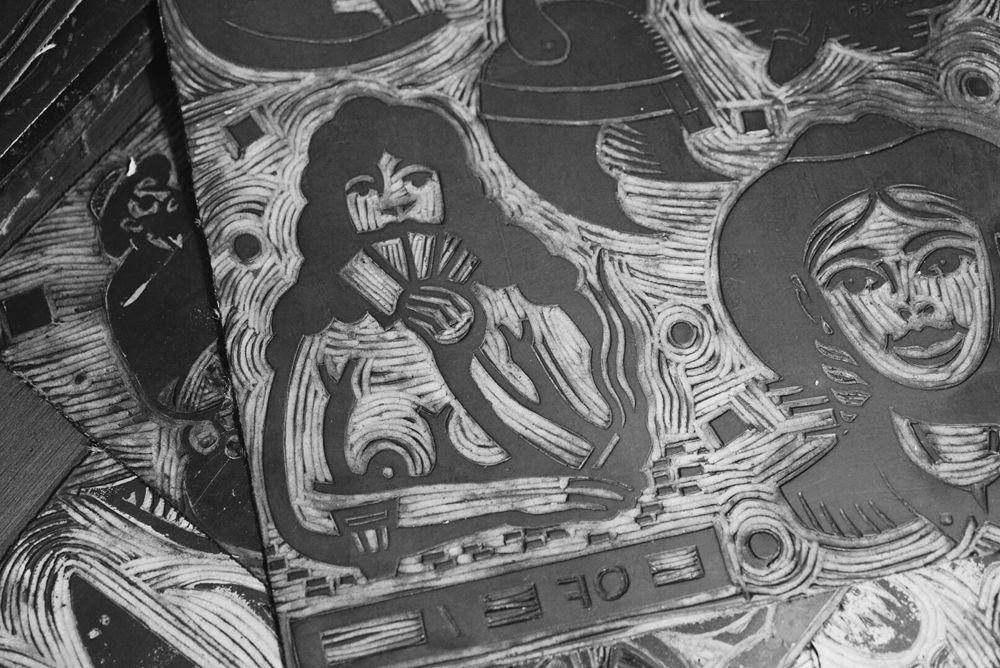 In your own words, how would you describe your style and aesthetic? I aim first and foremost for something that’s bold and legible. I mostly get that through surrounding light objects with dark and surrounding dark objects with light. It’s a shape-based approach rather than line-based. I want things to be solid and well-made, but I really enjoy folk art and think that once things become too good they start to become less good. So as far as style goes, where do you draw inspiration from? I try not to be consciously influenced by anyone else, and at the end of the day, looking at art is kinda boring to me compared to actually making it. There’s so much successful work out there that I don’t even know where to start, but I’m not the type to lose my shit over others’ work in all honesty. That said, traditional American tattooing—as a style executed by millions—is super inspirational to me. 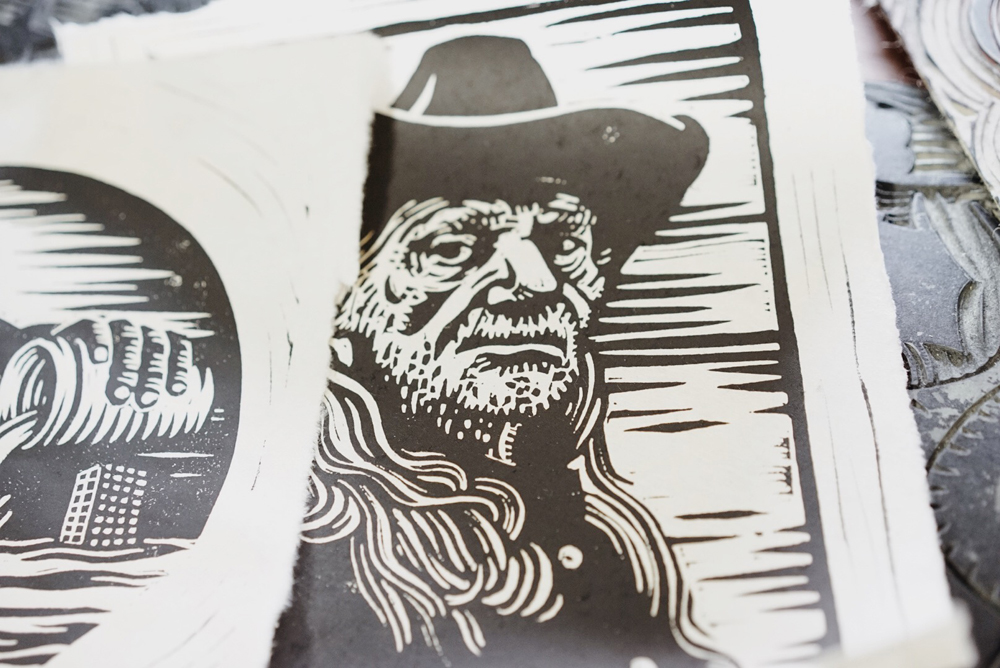 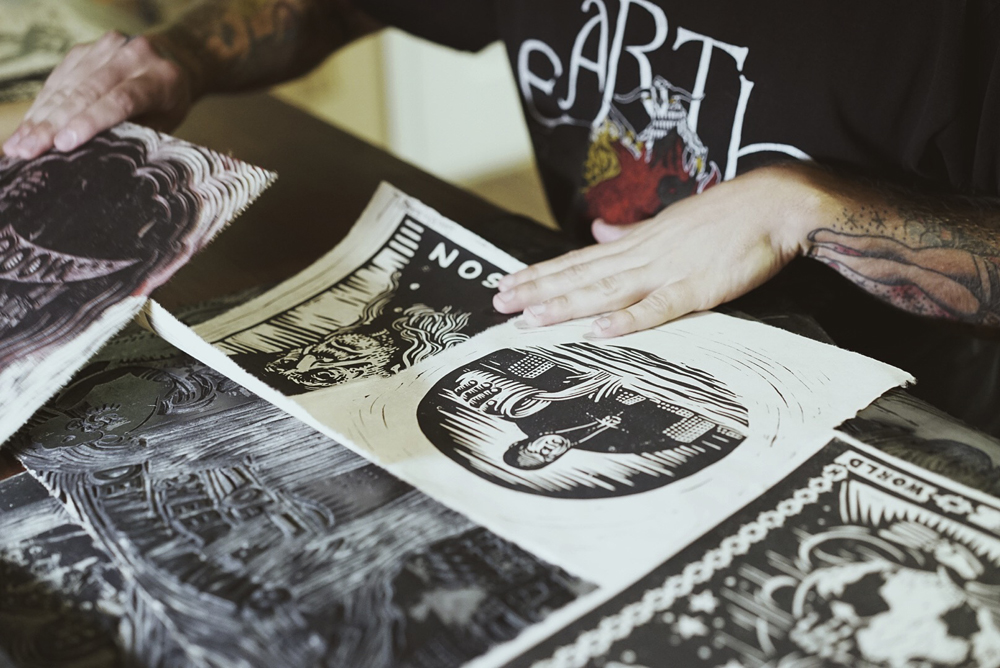 Being from Austin, Texas. How is the art scene down there? Are you part of a group of like-minded artists? I think the Austin scene has a reverence for the hand-made and folksy. I suppose I’m part of that. I value drawing skills, but also realize that it’s easy to get caught up in that and make work that lacks a certain soul. The best parallel I can think of—and I’ve talked about this with other artists—is to skateboarding. There’s skaters who are insanely talented, with machine-like technicality, but it just doesn’t resonate with me like someone who is having fun and skating with great style.

Instagram, and only Instagram, is what has allowed me to make a living up to this point.

Being an upcoming artists, are there any challenges that you face when it comes to putting your work out there? How do you tackle on to market yourself ? Instagram (@DentonWatts), and only Instagram, is what has allowed me to make a living up to this point. That is really the only way you can find me and somehow I am being found and offered work, so that’s great. I’m not a particularly a good businessman, and I’m in the process of branching out, but I’m stoked to live in 2016 where I don’t have to go to a physical location and meet someone in person to try and market myself. I’ve got a “build it and they will come” mentality I guess. The Internet is great. Any advice you would like to share ? I’m still very much up and coming, so don’t really feel like I’m in a position to give advice at this point. No matter what you do, if your heart is there and you’re passionate and you work hard and aren’t a shitty person, then things will fall into place. 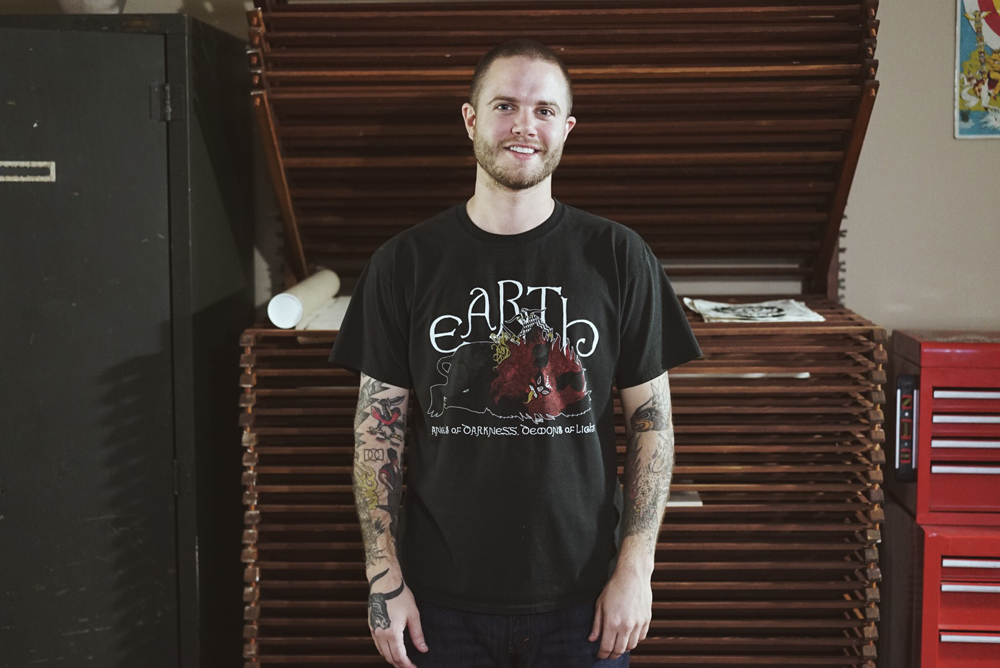 Johnny F. Kim
"I prefer to do graffiti solo, preferably in the morning or on my lunch break." How Faker's graffiti roots became his bread and butter as a graphic designer/creative director, with clients like MTV...
HIDE COMMENTS