A Lifetime in the Making :: Callum Preston's "Bootleg to the Future" Solo Exhibition

Artist and designer Callum Preston is set to debut his “Bootleg to the Future” solo exhibition over at Hogan Gallery, which will act as a tribute to his favorite movie franchise of all time, Back to the Future. Now, this isn’t just a collection of some paintings from the movie’s most memorable moments; the show’s body of work features an expansive batch of mediums. Yes, you have your canvas works, but there’s also an impressive array of sculptural work, costume designs, replicated props, and even an exploration into the fictional Hill Valley’s lore. Meaning the man goes over sequels, spinoffs, and even speculated gang activity in the trilogy.

Basically, the long-time Everfresh Studios artist has found and built the Pearly Gates for any fan of the films, and opened them on up for everyone to to enjoy. But no BTTF tribute would be complete without some sort of nod to the iconic DeLorean, and Callum doesn’t disappoint. The “crowning glory” of the whole event is the Aussie’s glorious life-sized Time Machine, constructed from miscellaneous objects, timber, and scrapped electronics—what I like to call the ultimate form of trash candy.

So before the exhibition’s start date being October 21, 2015—the date of Marty McFly arrives in the future and thoroughly confuses the present day Michael J. Fox—I got the opportunity to talk to Callum Preston about his methods of working in different mediums, turning fascination into artwork, and, of course, his lifelong affinity for the franchise. 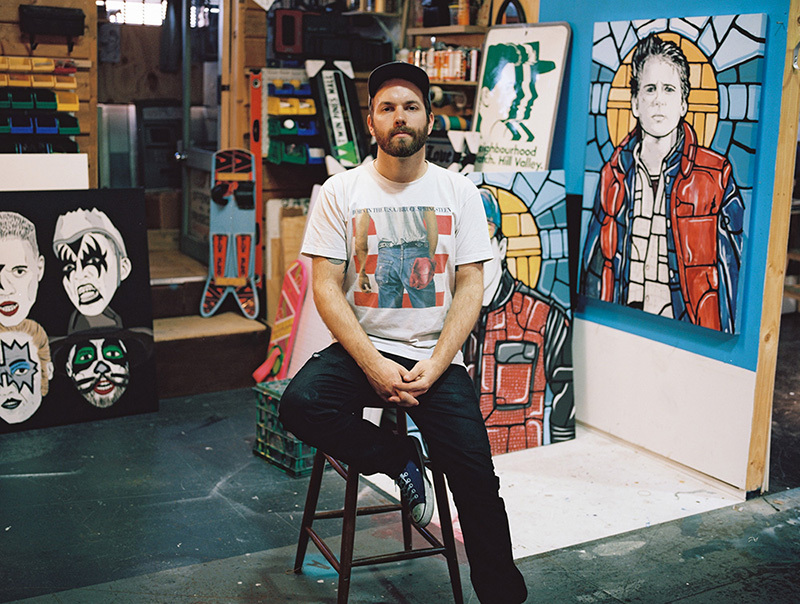 TODD KNAAK: There’s quite a few different mediums [in the show]—did it all start with one? And did you fly between painting and building, or just stick to one until it was finished?
CALLUM PRESTON: A lot of the work has been a start-stop type thing, while I wait for paint to dry, I go build; while glue dries, I go sketch, and so on. I’ve had 3 or 4 works on the go at one time, and then they all kind of wrap up at once.

What made you decide to turn a fascination and admiration into an artwork?
Originally, I had the idea to put on a group show around BTTF, but after some consideration, I realized all my time and energy would end up being in the organizing rather than creating work, which was the whole reason [I wanted to do it]. I had these ideas in my head, parodies, tributes, all kinds of things. So I turned that idea into a kind of “One Man Group Show,” where I create all the work and I’m not tied to any one medium or style.

I’m sure this is the first question people ask you, but what is it about the Back to the Future trilogy of all movies and franchises?
…As far as timing goes, it hit me at the right time, it was there for my interest in skateboarding at age 5, it was captivating. I just never remember a time when it didn’t exist, the familiarity just felt right. 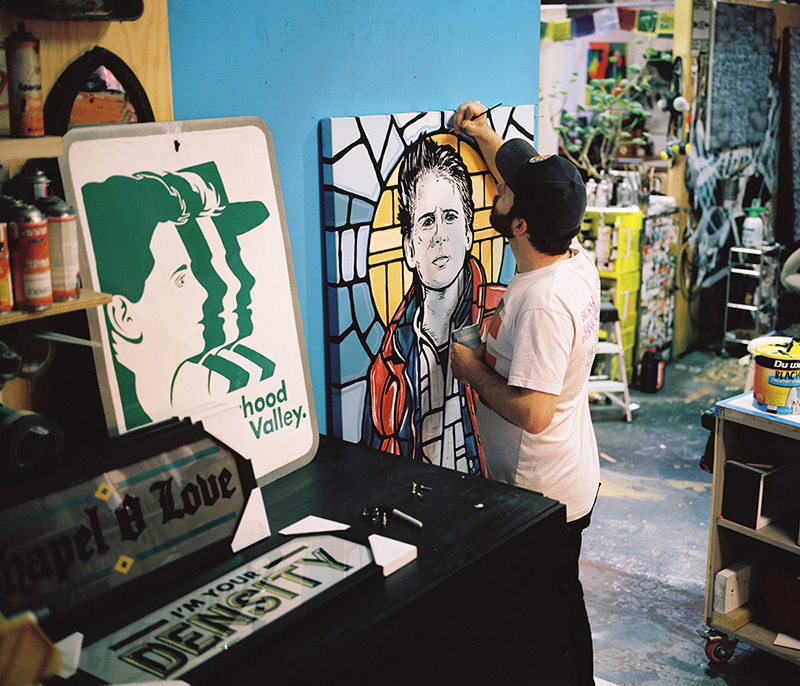 With October 21, 2015, being the final BTTF thing to look forward to (and with no fourth movie in sight), do you think October 22 will bring you a sense of closure? Or longing? Or will nothing change for you at all whatsoever?
I’ve been contemplating it while making the works for the show. It’s a weird one, because from that day forward, it all becomes the past. Obviously, the 1955 era was the past, but they did such a good job of the ’80s period that that always felt like home—and the 2015 was a far off mystery. I think it will feel a little weird, but I suppose a sense of closure is true. I can remember thinking, “I’m gonna be 31 when it’s 2015! I’ll probably have kids and an office job just like Marty.” Reality is I hang on the back of a passing truck on my skateboard while dropping flyers for my show. I’m way more like ’80s Marty than 2015 two ties Marty.

All the BTTF movies are insanely fully-realized—the town, timeline, characters, dress, music, etc.—do you think being influenced by it at such a young age inspired you to dabble in a little bit of everything yourself? Be it your artwork, merchandise, music videos, designing spaces, etc.?
The detail of the films always struck a chord with me. In some way, I feel that may have influenced my work over the years. I find that “overdoing” it seems to be my thing—more is more, not less is more. I envy designers who can work with a big amount of negative space, I just fill it up! But as far as the type of work I do, it’s much more of a “take on whatever come my way” approach.

Do you find that the vibrant and distinct color palette of the films apparent in any of your work?
For the show, the colors of the film have for sure come through. The ’50s washes, the 1880s full of browns, the 2015 vibrants—but in general I have just created the works how I want to see them, not having any real limitations.

Will you continue to expand your BTTF universe after the show is over?
No, thats the thing—I see this as a time and place [and] opportunity and a way for me to put a huge body of work together, tie a nice big bow around it all, and say, “There it is, thats my BTTF period.” I am sure some things will come up in the future that will be connected, but this show is taking place as a celebration of us reaching the final date in the film. 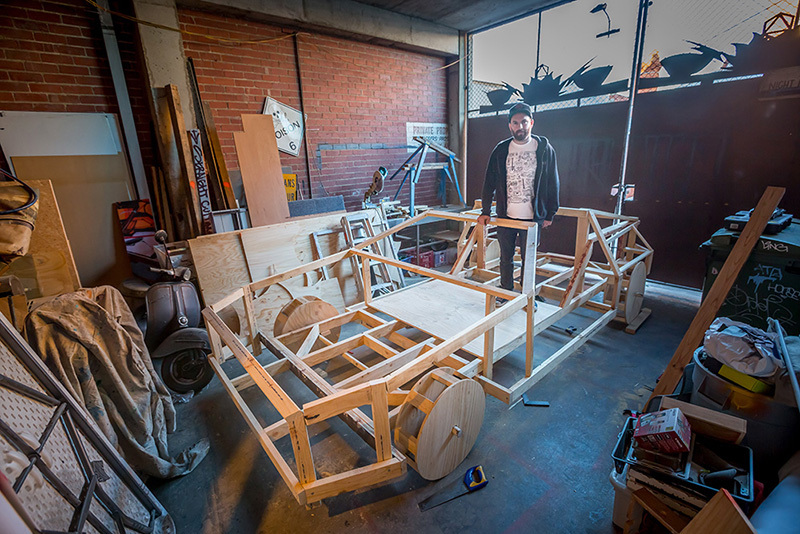 I am sure you’ve fantasized about the fourth film. What would you ideally like to see in it?
I honestly haven’t. I remember being real bummed in 1990 when the third film finished and it said “THE END” at the end of the film. But now, as an older and more jaded creative, it would take a miracle for a 4th film to be worthy. I feel it’s never going to make the first three any better, it’s only going to stand out and need to have excuses made for it. They made the right call.

Is the future what your child self dreamed it would be?
The future is actually way better than I imagined, I thought I’d be bored or feel old or whatever. But look, I ride a skateboard everyday, am making an art show just for fun, I have a beautiful fiancé, and we still pay our bills on time and work for ourselves. No one is sending me a “You’re Fired!!” fax.

To you, personally, is this exhibition more about the love of the movie, the future, or your own past?
It’s about a love of the films, and further exploration of these stories.

Even though October 21 is passing, do you think this film has the power to continue to inspire children to look ahead even though it will never technically be about the future again?
Because they made 2015 out to be this Jetsons kind of world, I think it will continue to capture kids’ imaginations because the reality is the world will never really look that way, so it’s all still a fantasy. 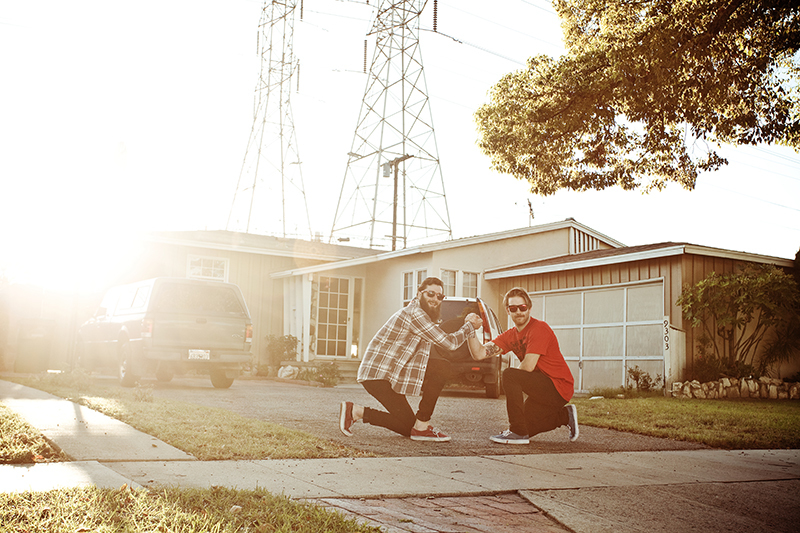 Which tugs at your heartstrings more—the film’s depiction of a bright future or the way to romanticizes the past?
The ’50s stuff always gets me. I have always been way more about the past than the future, I suppose it’s because I know I’ll get to see the future—hopefully for a long time—but I’ll never know what it is to live in the era of my grandparents and parents. I’m just thankful to be old enough to have experienced single kick skateboards, needing pay phones, Walkmans, [and] no Internet. It gives [me] a perspective on the world that I would not want to lose.

Could you rank the order of your favorite movies and why?
Okay, so I’ve had to think long and hard about this over the years. I see it this way, I’m not saying it’s correct, but I also challenge you to find someone that puts the third film above either of the first two. My ranking is as follows:

1 – BTTF2 – You get the best of all worlds because we see the future, but get to visit the ’50s from the first film, we get to see an alternate 1985 where Biff has risen to power, and we are introduced to the hoverboard. It has it all.

2 – BTTF1 – The original journey, mind-blowing plot holes where a woman falls in love with a man who looks exactly like her son as she grows older, and a man who tried to sexually assault her now works as their car cleaner. But it does take us to a simpler time, and that ’50s Americana is so great. Also, no one questions the toughness of a man wearing 3D glasses full time.

3 – BTTF3 – It’s another journey, it’s a bonus round, it is the third child of the trilogy, and I often start to think that it doesn’t stand up, but then I re-watch it and it totally works. It’s never gonna beat out the first two, but I’m thankful it exists. 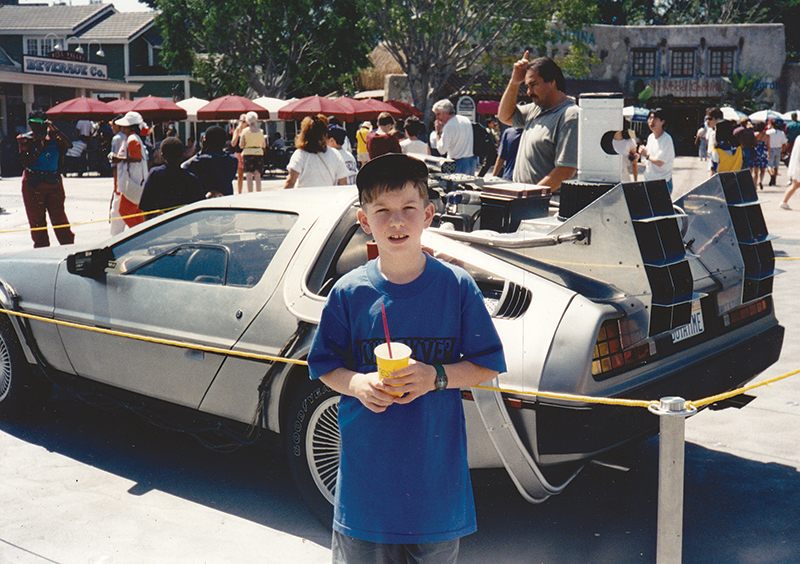 Callum’s “Bootleg to the Future” show runs October 21-28 and is open daily.

Keep up with Callum and his art via Instagram and Tumblr. The Hundreds Staff
Since 1989, the world has been patiently awaiting the future that the legendary Back to the Future trilogy promised us in its second film. Now, with October 21, 2015 rapidly approaching, it looks l... BACK TO BACK TO THE FUTURE.

Bobby Hundreds
I was picking up my car from the shop the other day and saw that the guys at DeLorean Motor Center were working on a Back to the Future time-machine conversion, as they often do. This particular on... Bobby Hundreds
I was thinking about posting this over on my Hypebeast blog, but then I figured it made sense to do it here. Although an automobile, the Delorean DMC-12 had as much influence on my design sense as ...
HIDE COMMENTS