We came to know Ben Jones’s work through Paper Rad, a collective operating out of Pittsburgh, Pennsylvania, and Providence, Rhode Island, co-founded by Jones with Jessica and Jacob Ciocci.

Using symbols, characters, and iconography from the ’80s and ’90s popular culture – Garfield, Alf, My Little Pony – the collective managed to release an incredible amount of work: animation, books, comics, zines, video art, net art, MIDI files, paintings, installations, and music. All members were equally immersed in the creative process, and Ben Jones was enjoying the creative freedom the collective provided for him.

Jones’s inspiration comes from video games, old cartoons, bright colors, patterns, and electronic music – all these combined in a structured and narrative manner. He creates his own mythological pop world, and has managed to make his vision accessible to all of us. His first pilot, the animation Neon Knome, aired on Adult Swim’s website in 2010, as he has also served as creative director of FOX’s animation platform ADHD.

Keeping many elements from his earlier work intact, like using bright, fluorescent colors and bold forms, and staying true to his love of pop culture, Ben seemed to want to express a more cohesive, personal universe. His first TV series, Problem Solverz, that aired from 2011 to 2013 on Cartoon Network, gave him the opportunity to use all his efforts and knowledge in order to create a very successful animated series. 1.138 million viewers viewed the premiere and the rest is history. Currently, Ben Jones is working on his new animation series, Stone Quackers, on FXX, a story revolving around the misadventures of two ducks, Whit and Clay, set in the fictional city of Cheeseburger Island. 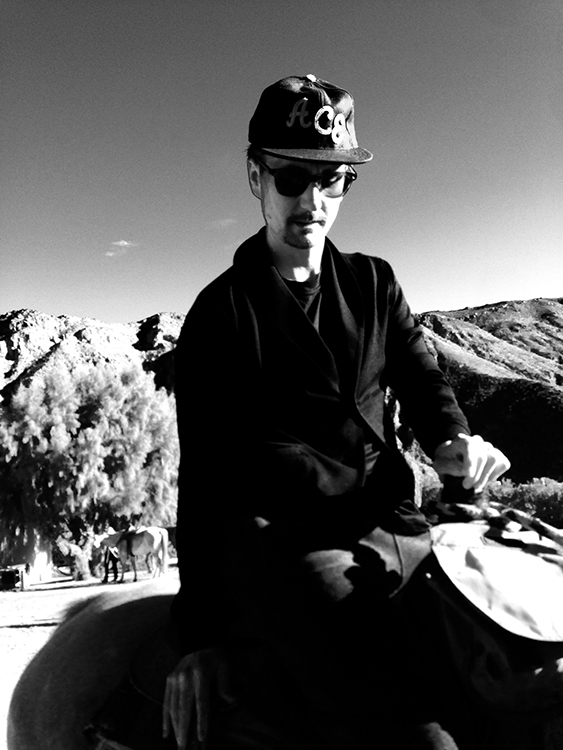 TASOS & MARINA: You are currently based in Los Angeles. In which ways is that affecting your lifestyle and work?
BEN JONES: Generally, it’s more about hamburgers in LA. I like Applepan, the Habit, and Mcall’s ground beef. The coffee is good, G&B, eggs are cool too at Sqirl. Now this brings us to the topic of tacos and/or salsa. That’s a whole “thing.” I would have to say you should actually go to Mexico if you want tacos. It sounds insane, but trust me. And yes, I mess with a lot of kale salad, so to keep things succinct, here is a list of kale salad in no order: Heart and the Hunter, Soho House, [Little] Doms, Gelson’s, and LA Chapter.

How would you describe your relationship with technology?
Pro-co-dependent. I still like to use a mechanical pencil sometimes for drawing, but second to that, I externalize all my ideas via a computer interface. I use a big screen you can draw directly onto with a stylus called a Cintque, coupled with various off-the-shelf drawing/animation/modeling programs, like Flash, Photoshop. Not to make it sound overly important or precious, but it’s something unique to my generation, the first – and thus now most matured and mastered – to have a computer at a young age to fuck around with. I don’t believe in glorifying or examining or reflecting the relationship in what I produce. That said, my work is in and of itself hopefully an expression of this loving relationship. My first computer was an Atari 800 FYI.

Could you tell us about the experience of working on TV, on The Problem Solverz and your latest series Stone Quackers?
Stone Quackers is made by [FOX] ADHD, an awesome animation studio. ADHD has the coolest, craziest artists I have ever met. An entirely new, experimental animation and compositing process was custom crafted for Stone Quackers, coupled with the funniest people you will ever meet, finished with some Oscar-nominated, some hauntingly talented, and some funny voice actors and actresses. The making of Stone Quackers is like if Studio Ghibli had a 3-way love affair with Kenneth Anger and Phillip Guston. 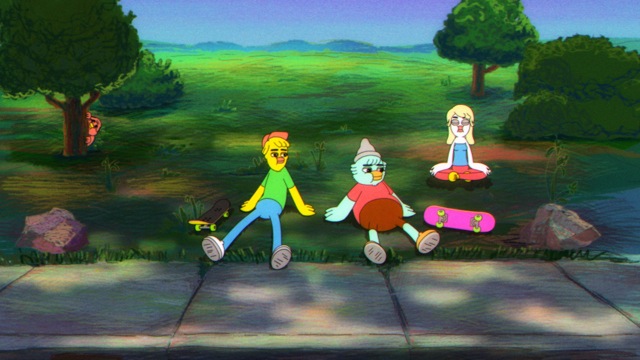 A still from Stone Quackers.

How do you work on an animation piece, what’s the procedure?
Everyone does it different, but in the end, when it’s good it’s the same. You want to be drawing a really great story – that is funny.

Sometimes, we make an audio track of sound effects then have a story boarder correspondingly draw a gang of rats gnawing off a police officer’s face as a samba record skips and a grown man gnaws on his leg. Sometimes, a really smart dude that can type writes a funny script. It doesn’t matter. Someone needs to draw something awesome, and the more help they have going into what they are drawing, the better. The Simpsons will be like, “We do a table read,” which is amazing, but then a bunch of other stuff happens that is really expensive that I don’t get to do. So, again, make funny drawings, be they a blank stare, or someone getting hit in the nuts.

Could you tell us a little bit about the making of your latest book, Men’s Group: The Video?
It was and is meant to be a very “political” book, or a study of gender issues. There are horrible inequities and double standards that are hardwired into the American institutions. And most all of them “hurt” the female gender’s position. I’ve always been very aware and tried to be conscious of these things – in how they affect my storytelling with characters, or how they effect the creative process. Then, at some point, I also realized that in my life, you can try to be like a “sensitive guy” who is cool, and be living your life creating art and maybe you have a relationship, and no matter what, the flip side of these inequities can come along and “hurt” you. Meaning, I don’t care how sensitive and nice you are as a dude, if another non-sensitive dude who has “game” comes along, he can steal your sensitive girl and your sensitive art – why is that? Because having “game” – confidence and awareness of your gender and sexuality and “power” – is actually more important than being sensitive, because you need to help yourself before you can help others. The book tried to be a confident statement of my art, power, position, and responsibility. It’s the – the HBO show – of male zines. Fucking man up, grow a pair, and don’t let assholes run the world.

How much time do you spend in your studio, and how many people work with you?
In total with the animation studio and art, we all work together, and it’s like 200 people.

The ladder is a reoccurring symbol and pattern in your work, what does it mean to you?
I just realized it looks like a film strip too. It’s the best shape ever. It came from the fact I was drawn to minimalist art, but I knew I could just bite that shit. But, when I saw Sol Lewitt, I got an art-boner. Then, I went home and played Atari and I was like, “Wait, why did Sol Lewitt and all the minimalist artist design the 8-bit videos that raised me and defined my reality as a kid? Oh wait, they didn’t.” 8-bit design confronted a whole different set of limitations that, instead of being self-imposed conceptual exercises, were, in fact, a by-product of the lack of memory or bits that early computer chips could handle. It’s an obvious observation, but I decided to formalize this realization a little bit more and reintroduce minimal shapes and characters into my work with the understanding they now meaning some more that what Sol was doing.

The ladder I do was from Zelda. 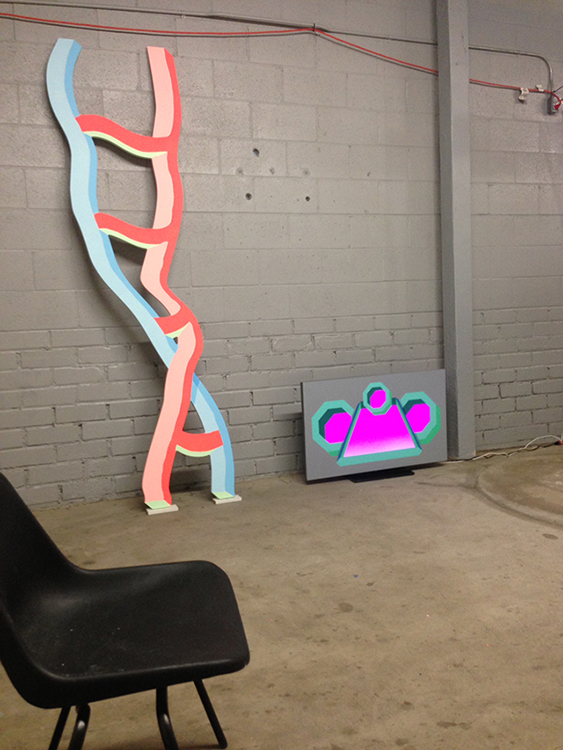 How does the notion of religion inform your work?
My mom is a witch. I think religion can be a great source for comedy.

What was the last piece of music you listened to? When and where was that?
Frank Zappa, “Hot Rats,” driving down Pico on the way home from a Belgium noise concert.