Acme was not your traditional skateboard company. Started in 1991 by Jim Gray, Acme went completely against the grain of what was going on in the skateboard industry at the time—which, in part, ultimately led to its demise. As a former pro skater for the now-legendary Blockhead Skateboards, Jim had plenty of industry connections. He formed a partnership with then-Tracker Trucks and Transworld Skateboarding Magazine head honcho, Larry Balma, which facilitated Jim’s foray into the skateboard industry. While Jim was still riding for Blockhead, he was also running his own company called Brainstorm Designs and doing ad sales for Transworld. He explains the inception of Acme as follows:

“Through selling ads, I got to interact with most of the brands and company owners in skateboarding. I kind of looked around and thought if all of these guys can do it—I can do this too. I just decided that it was my time, and Acme was just me putting something together for myself.” 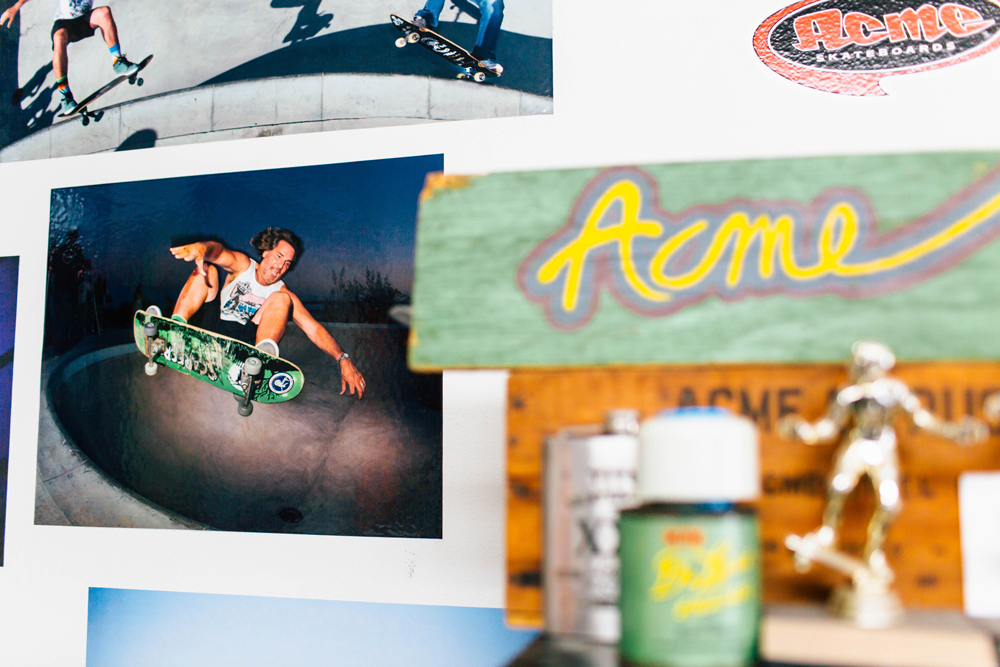 At a time when professional skateboarding was completely dominated by image and personalities, Jim took an opposite approach with Acme. “Most [skate] companies [at the time] were just marketing companies... When Acme came out—we didn’t make any pro signature models. We were out to prove that you could have a solid company without pros riding for you—and it wasn’t all based on whose name was on your product. It was based on the quality of the product. From the day we started, we were at odds with the industry in general.”

“From the day I started, I wanted to make my own boards… by the end of ’95, we were in full production.”

Gray’s radical approach worked well through the early to mid ‘90s; his brand was doing sales in the millions. As a result, Jim decided to take a risky step that very few brands both past and present have attempted: He set up his own wood shop. Setting up your own skateboard press is a risky endeavor—the equipment is expensive, and it requires a great deal of work to get the specifications right in order create a functional skateboard deck. But a wood shop gives you ultimate control over the quality of your product, and Jim’s passion for bringing the right Acme boards to the market led him to this bold move. “From the day I started, I wanted to make my own boards... by the end of ’95, we were in full production.” 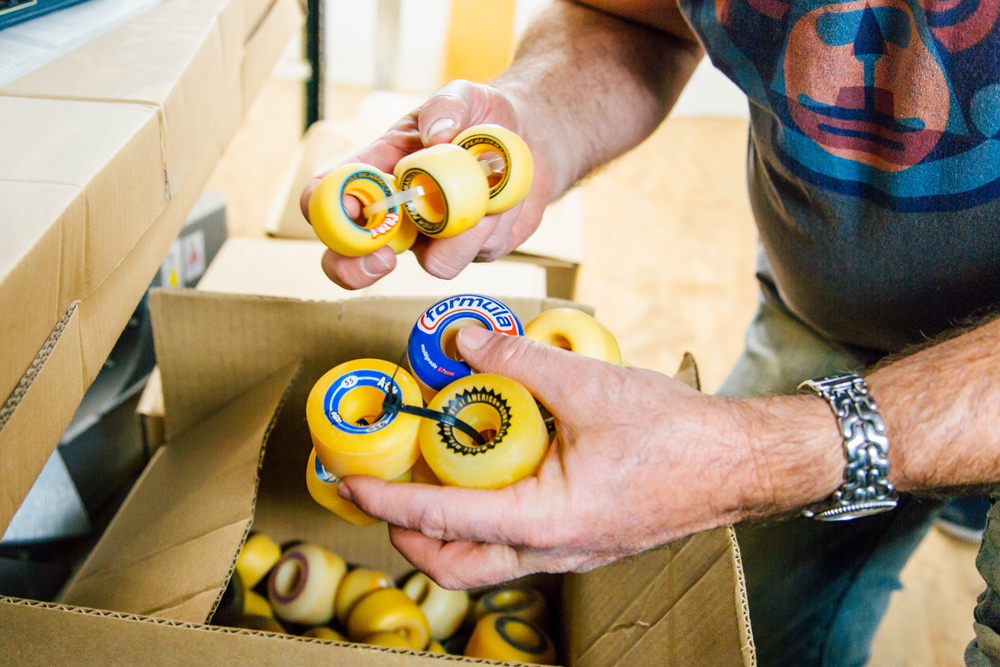 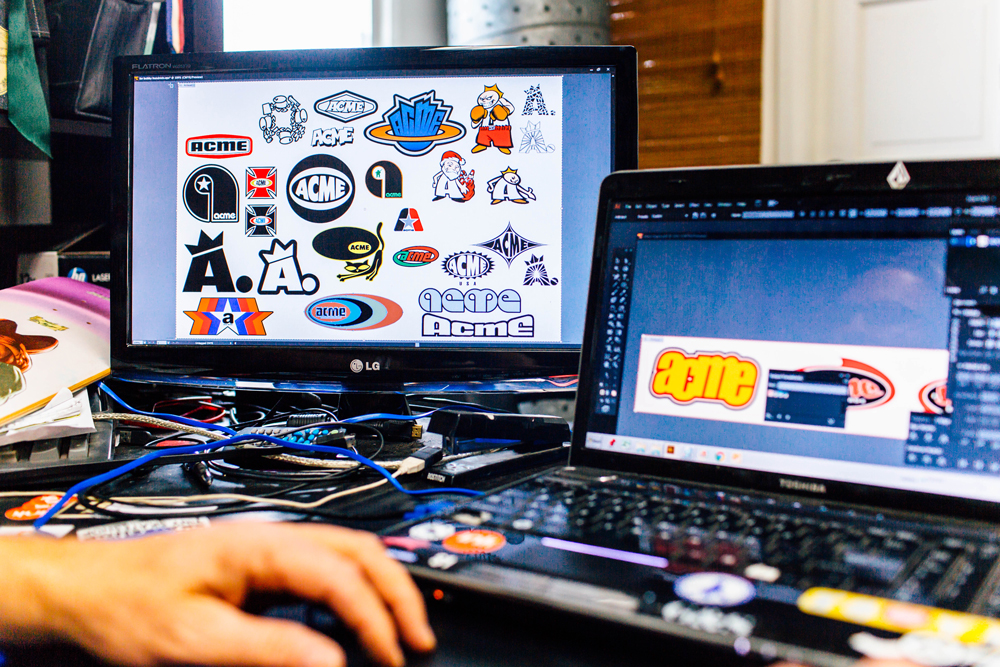 While Jim Gray’s operation was in full swing and prospering, he began running controversial ads that challenged elements in the skate industry that he did not agree with. This was a move that would prove to be costly in the long run—Gray took a swipe at World Industries, which was run by the notorious Steve Rocco. “I ran one ad that made fun of World Industries for stealing Wet Willy and Flame Boy, because everything that they had ever done they had stolen. I had actually ran into the guy that owns the trademark for Wet Willy, who did later get a major settlement from World Industries.” Rocco sued Jim for copyright infringement and libel. The fallout from the lawsuit was something that Acme was never able to recover from. Despite the risk involved with confronting World Industries, which was the dominant brand in skateboarding at the time, Jim was not afraid to let his opinions be known.

Jim had a very tough year after the World Industries dispute, having lost a large amount of money on legal fees: “Being an independent guy starting in my garage with 40 grand, I didn’t exactly have a million dollars to lose. I had to shift my business plan in ’98 to stay afloat. I converted from mostly making Acme and my own brands to making skateboards for other people—Birdhouse, Alien Workshop, Black Label, and Scarecrow to name a few. That, at least, helped keep me stay in the skateboard business. But I was not actively able to sell my brands anymore very easily.” 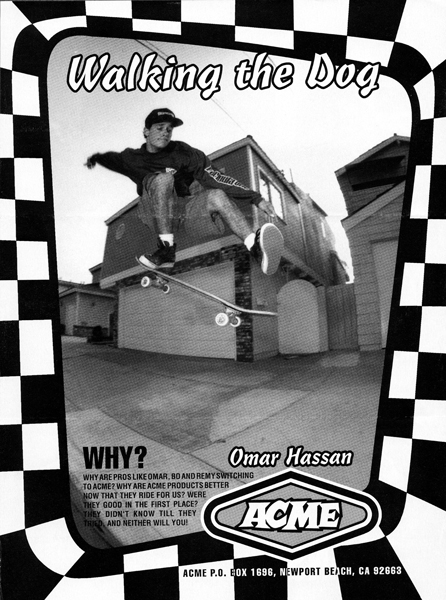 “We were out to prove that you could have a solid company without pros riding for you—and it wasn’t all based on whose name was on your product.”

Through the ups and downs of the industry, Jim ended up ceasing operation of his skateboard manufacturing business in 2008. He still owns and operates a sticker printing company and is in the process of relaunching Power Flex, a popular skateboard brand from the ‘70s that Jim is now the majority owner of. Regardless of his previous success and failure, Jim’s passion for skateboarding has yet to dim:

“For a long time, skateboarding was dominated by one style that was being pushed by a handful of companies. Now, we’ve hit a point where small brands are going in different directions and gaining traction in the industry. The rebel culture is just kind of rising all over again, and they’re not going to be told what to do—they’re doing whatever they want, and I love it and respect it fully. I may be 53, but I remember being 14 and my soul is still there. It’s really all about having fun.” 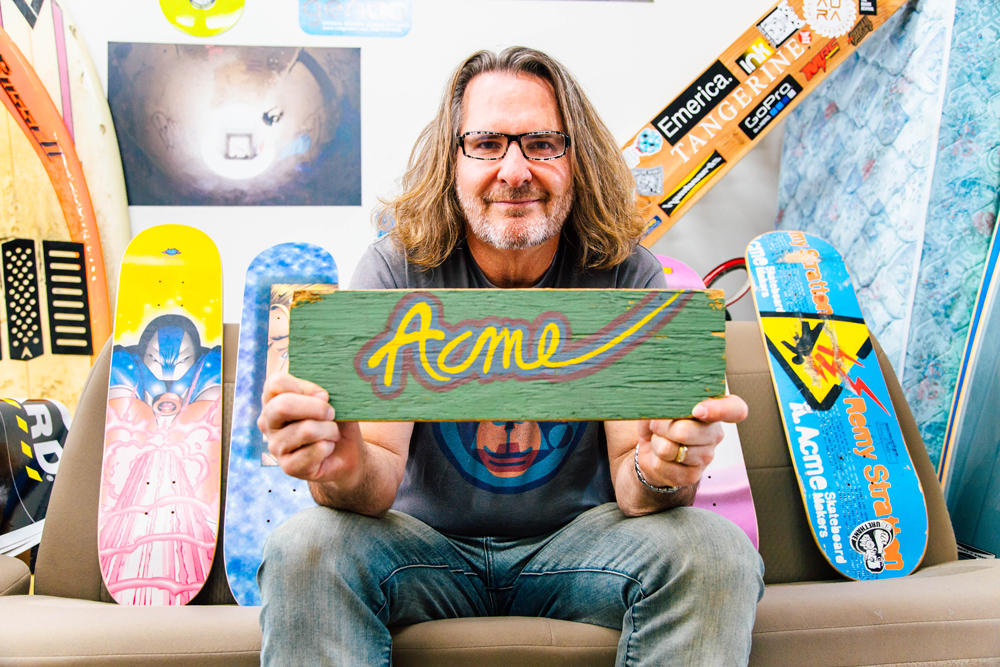 This article originally appeared in The Hundreds Magazine Spring/Summer 2016 issue. Kazie Holiday
A collaboration years in the making. The Hundreds proudly presents our The Hundreds X Acme Skateboards collection, a celebration of the years of influence that the brand had on skateboarding itself... THE HUNDREDS BY DON PENDLETON.

The Hundreds
The Hundreds is pleased to announce the release of The Hundreds by Don Pendleton collection, available tomorrow, Thursday, March 29, 2012 at the The Hundreds flagship locations as well as fine skat...
HIDE COMMENTS