Jim Davis’ classic American comic strip about a pre-eHarmony bachelor and his tubby tabby cat was my first consistent foray into the cartoon world, and the starting point for where I learned how to illustrate characters. And with all the licensed merchandise (plush dolls, t-shirts, alarm clocks, pillowcases [yes, I had it all]), it was even easier as a kid to submerge my reality in the Garfield universe. I even swore by lasagna, just because the sardonic heavy-lidded fatcat ate it.

But as I grew older (like.. 9), I started to tire of the Garfied comic’s 3-square charade. It was always the same story (Jon was a loser, Odie a complete idiot, Garfield a hater). I had amassed almost 24 Garfield books by that time, and had even ventured into Davis’ ill-fated offshoot U.S. Acres to keep my interest piqued. By the time I turned the ripe age of 10, I realized that if it weren’t for all these Garfield pencilcases/party favors/bicycle helmets in my closet, I would have moved on a long time ago. And you know what? Lasagna is actually pretty disgusting.

That was around the time my older brother directed me to another part of the Sunday Comics. The section usually reserved for intricately-drawn cartoons with big words, intelligent humor, and substance. Less lasagna, more meat.

The comic strip was Bill Watterson’s Calvin and Hobbes, and by the time I had finished that first storyline about a pariah weirdo kid and his stuffed-animal friend, I was Transmogrified. It wasn’t that the concept was mind-boggling, in fact, it’s as formulaic as it gets. But it was the way that Watterson envisioned exactly how an imaginative loner child sees the world (whether it’s authority figures, girls, or bullies) through minimal cartoon drawings in limited square footage.. it was the means by how he, both literally and figuratively, thought outside the box in terms of what a comic strip’s purpose and potential were. Up until that point in time, the Funny Papers were a 5-minute respite from your hellacious day. But Calvin’s words, and Watterson’s art, stuck with you throughout those next 24 hours.

One thing I also learned to appreciate was that Watterson never licensed out any Calvin and Hobbes merchandise (Sorry Hank, your Calvin-pissing-on-Chevy bumper sticker is bogus). Kinda the Ian Mackaye of the comic world, he disagreed with selling product tied in with his characters, claiming it undermined their value. He rejected offers to animate Calvin. And he shunned the spotlight. As far as I know, there is only one official photograph of him floating around out there and nary an interview. In fact, over the past decade, he’s all but disappeared from the public eye. 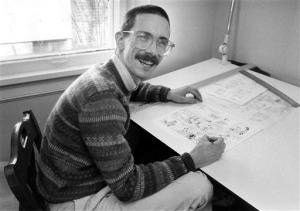 In many ways, Watterson was the anti-Jim Davis (and even sharpfully said so himself in interviews), and Calvin was the anti-Garfield. Watterson, partially because he was fed up with the bureaucy and commercialization of the comic industry, went out on top when he retired Calvin and Hobbes cold-turkey over 12 years ago. Jim Davis, on the other hand, continues to pummel through with Garfieldmania. I mean, there are even a couple live-action movies co-starring Jennifer Love Hewitt out there?? (I have no idea what is going on).

But I still gotta respect Davis for doing it his way. He looked at Garfield’s expanding horizons as an opportunity to touch as many lives as possible. While Watterson was relentlessly obsessed and overly-mindful of his comic’s integrity. Both artists have cemented their names in the annals of comic strip history, both for different reasons, and both via opposing methods.

And yeah, I did find a way to tie it all back into “streetwear.” When you consider the multitude of t-shirt-based brands out there, and how they go about structuring, selling, maintaining, and marketing themselves, remember there are the Jim Davises and the Bill Wattersons. Some are in it for the business, others for a mass-market quick buck. Some for glory, or to get their name on as many backs as possible. And then there are those that are mindful of those things, but also focused on the brand’s longevity, the long-haul, passionately consumed with their art’s integrity, and impacting the medium and culture surrounding their work. In the end, they might all end up at the same destination, but the ride can be a lot longer, a lot more fun, and a LOT more adventurous and fulfilling depending on which path you choose. 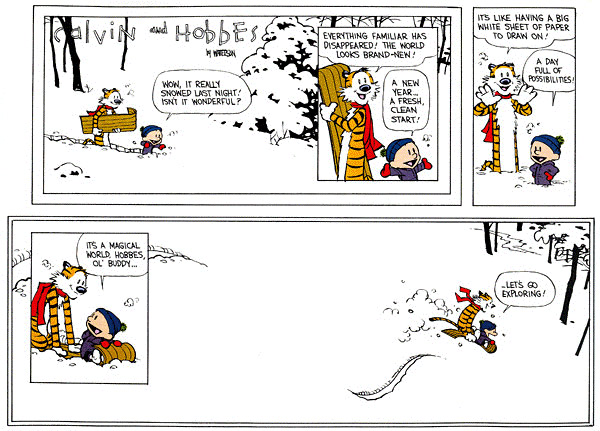