The guys around the office have been raving about the Oinkster for a while. Actually, not just around The Hundreds, but around the city. I hear about it often, especially if I list off my favorite burger spots (Golden State, Umami, Father’s Office) and don’t include the Oinkster.

That being said, we went to the Oinkster for lunch. 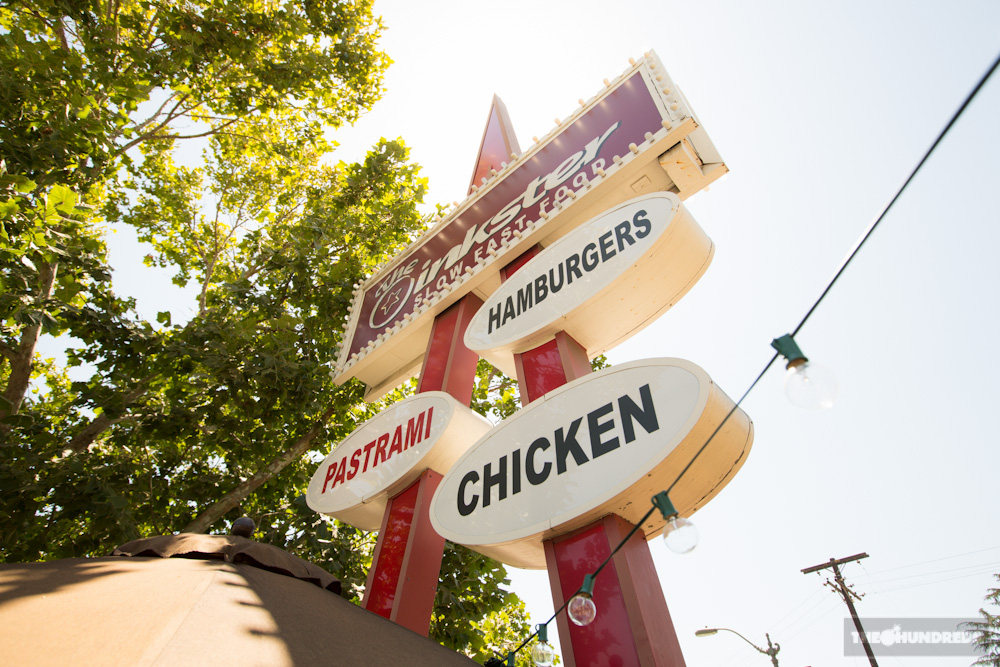 …in Eagle Rock! This was my first time venturing into this suburb of Los Angeles. From what I understand, there’s a really cool Filipino mall here. And Filipinos. And Oinkster.

Founded in 2006, the Oinkster took over a long-established A-frame burger dive, and converted it into a haven for food fans with high taste but lookin’ for quality accessible eats. The restaurant is coined “fast-casual” with menu prices ducking the $10 tab for grub that’s way over the mark. 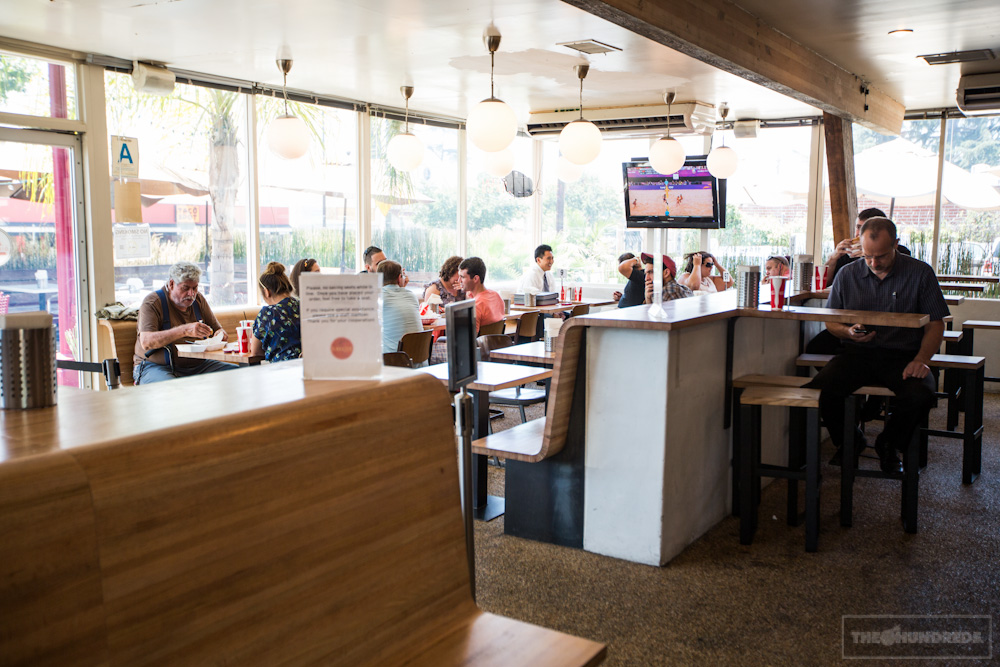 The renowned Andre Guerrero is behind the Oinkster, the same celebrated chef who introduced MAX/Marche LA, Senor Fred, BoHo, Butter Tart, Little Bear, and most recently, Maximiliano into the local foodie lexicon. Benjie does the ordering for us today. 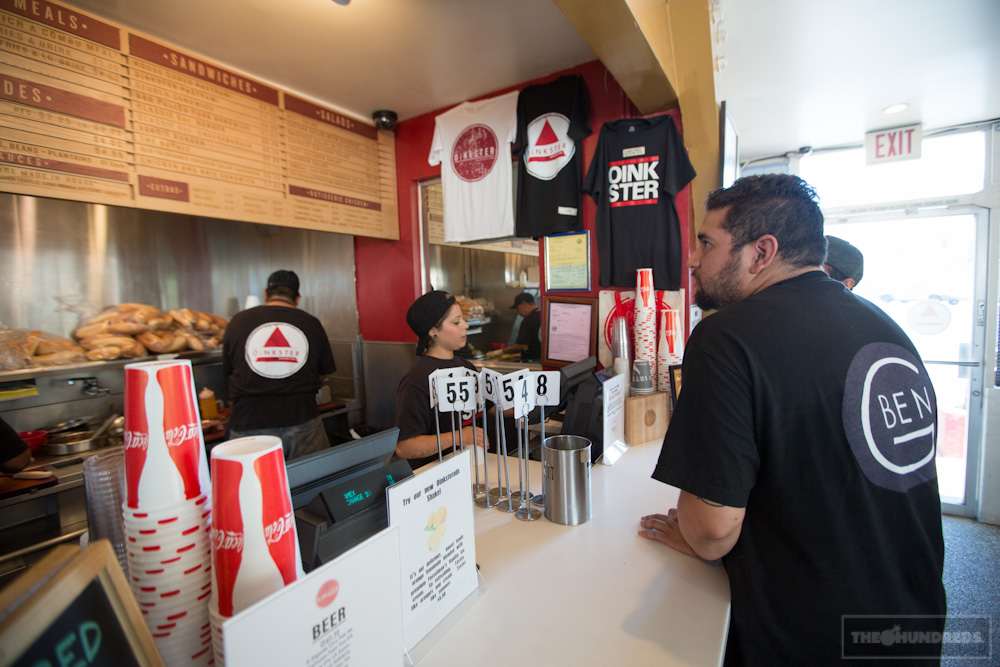 Although Guerrero’s name was enough to garner attention and credibility, the Oinkster’s big windfall was being featured on Guy Fieri’s Diners, Drive-ins, and Dives on the Food Network. The morning after the episode aired, the line was already wrapped around the building. And it hasn’t stopped since. 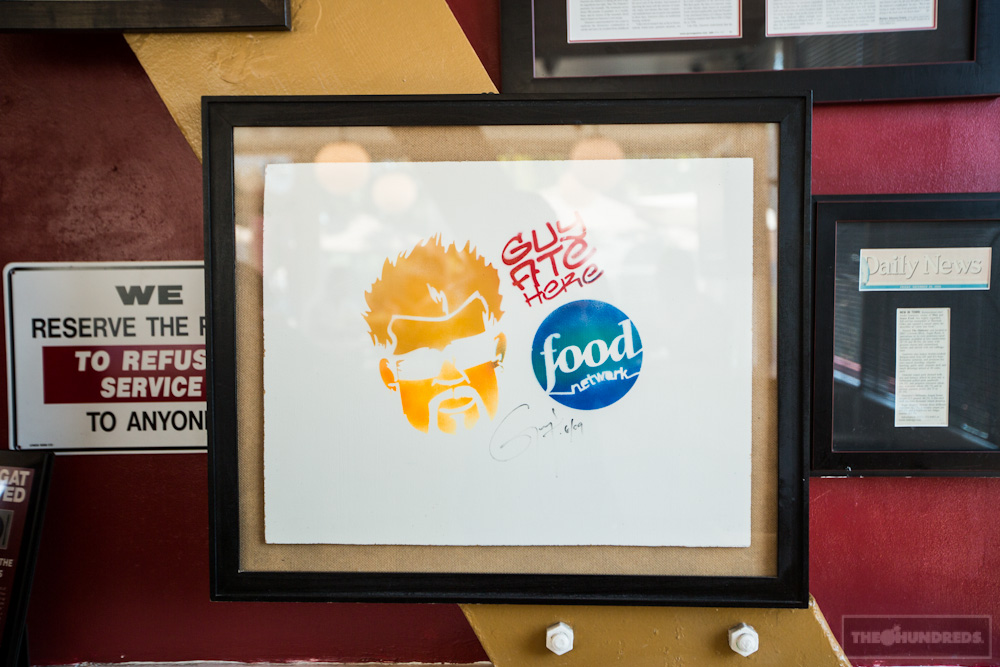 The crazy lineups are part of the reason why people are calling the Oinkster the Streetwear of burger joints (and by people, I mean some of the guys on our design team). One of their most popular campaigns is Burger Week, the Oinkster’s annual tribute to the great American hamburger. It’s as if the Oinkster is a burger restaurant cover band, selecting 7 iconic sandwiches to imitate and sell to an anxious crowd each day of that week. Last year they went after the Big Mac, the aforementioned Umami Burger, and Father’s Office burger. This year they copied White Castle’s sliders, In-N-Out, the Western Bacon Cheeseburger from CJ’s, and the Sourdough Jack, amongst others. 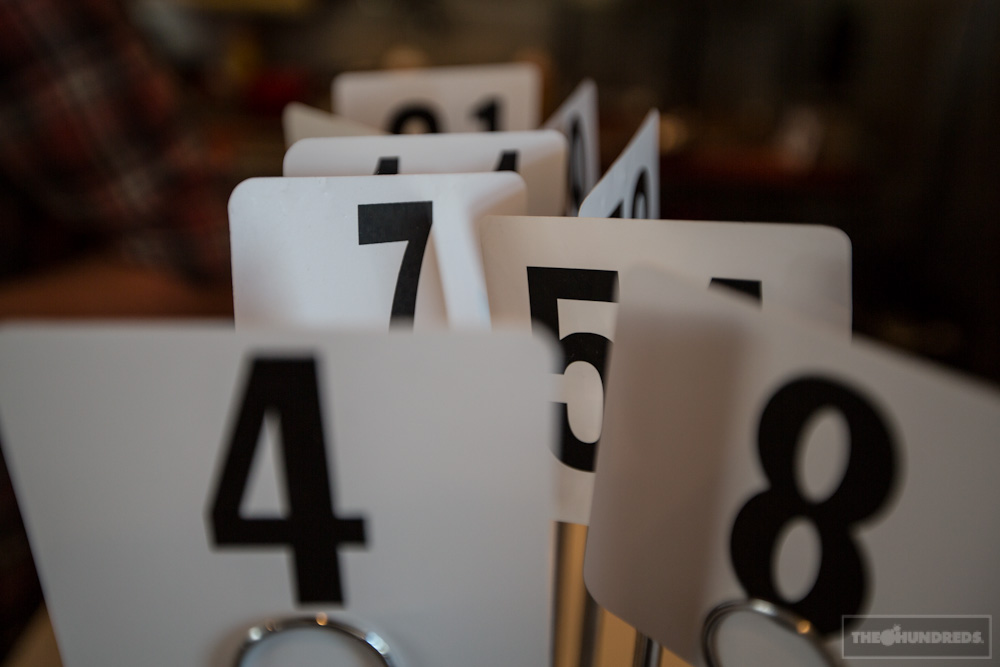 Max and Fred are Chef Guerrero’s sons and are incorporating the next generation of style and branding into the Oinkster phenomenon. 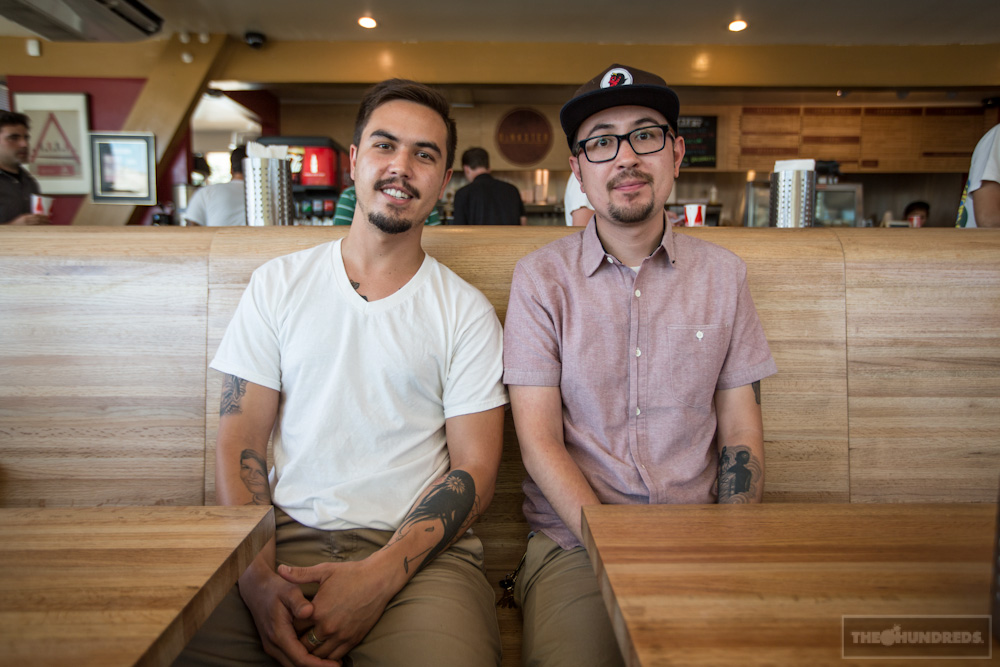 For example, a full-color, perfect-bound, printed ‘zine and limited edition button sets for the diehard fans. 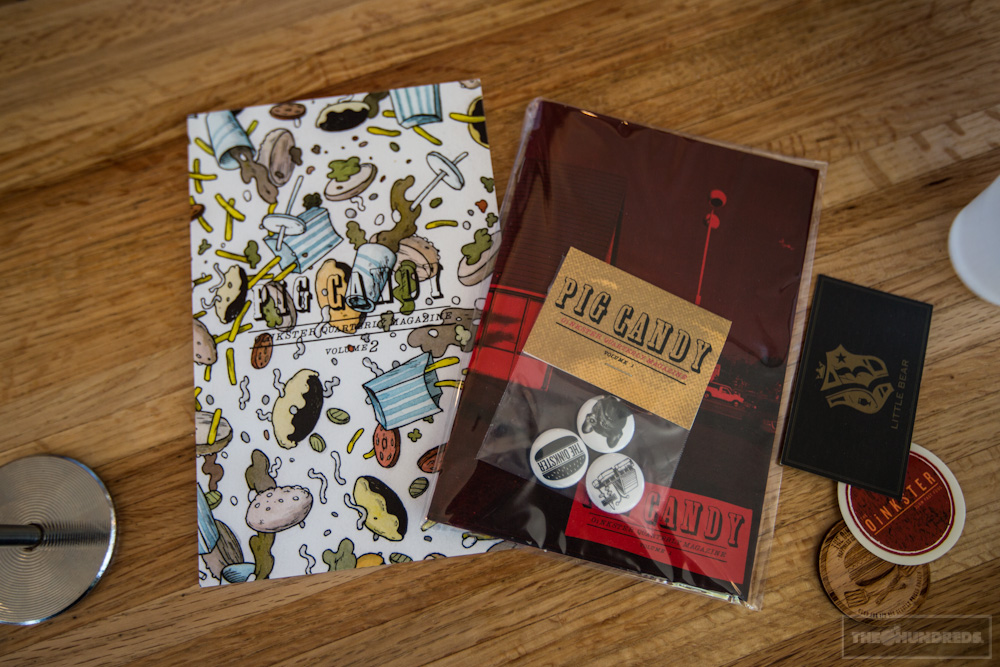 For Burger Week, a specific pin accompanied each day’s recreations. If you came through each day and collected all 7 pins, you got the limited t-shirt. This year, 175 people completed it and are my heroes. 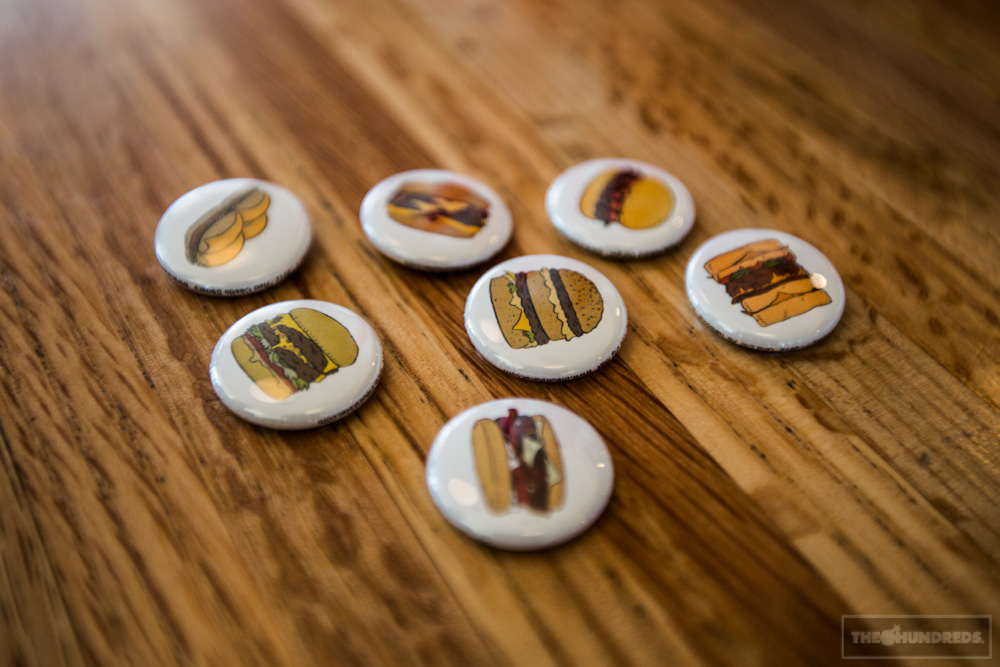 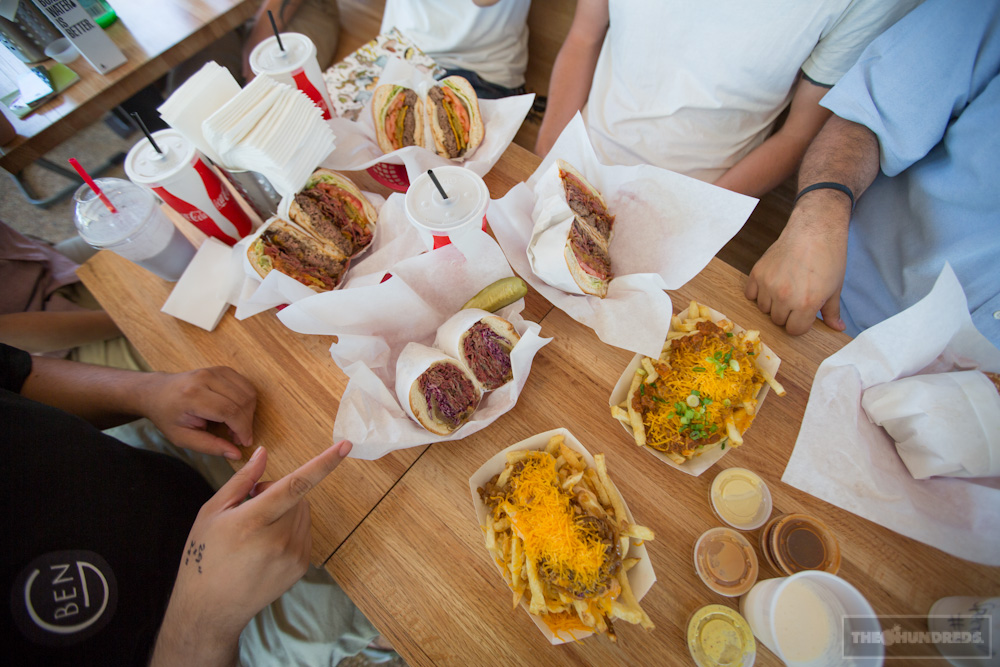 Green onions on top of the chili fries: 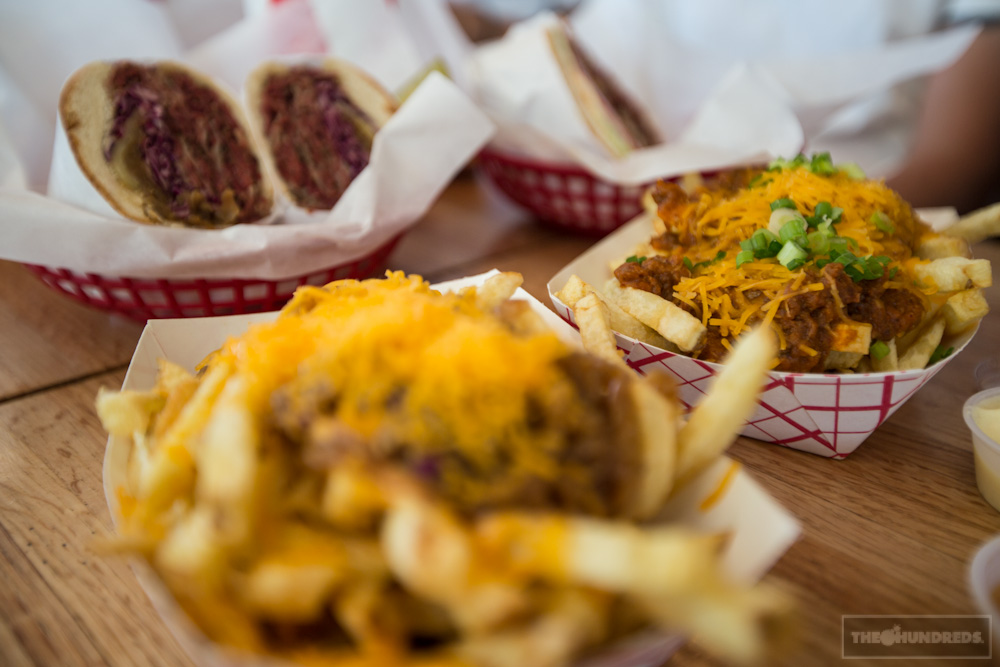 The dipping sauces are choice. 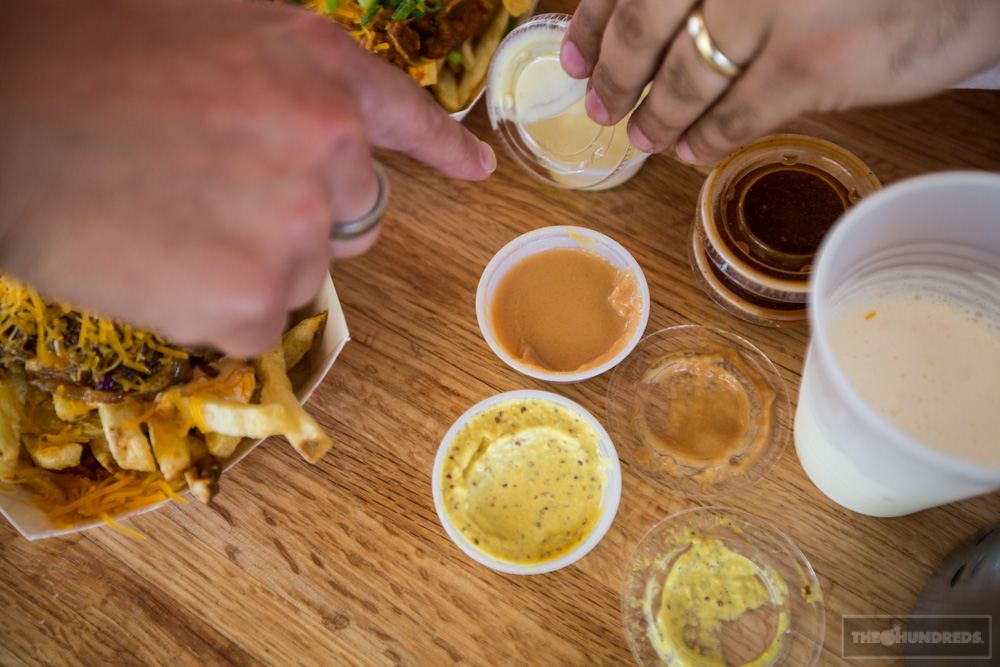 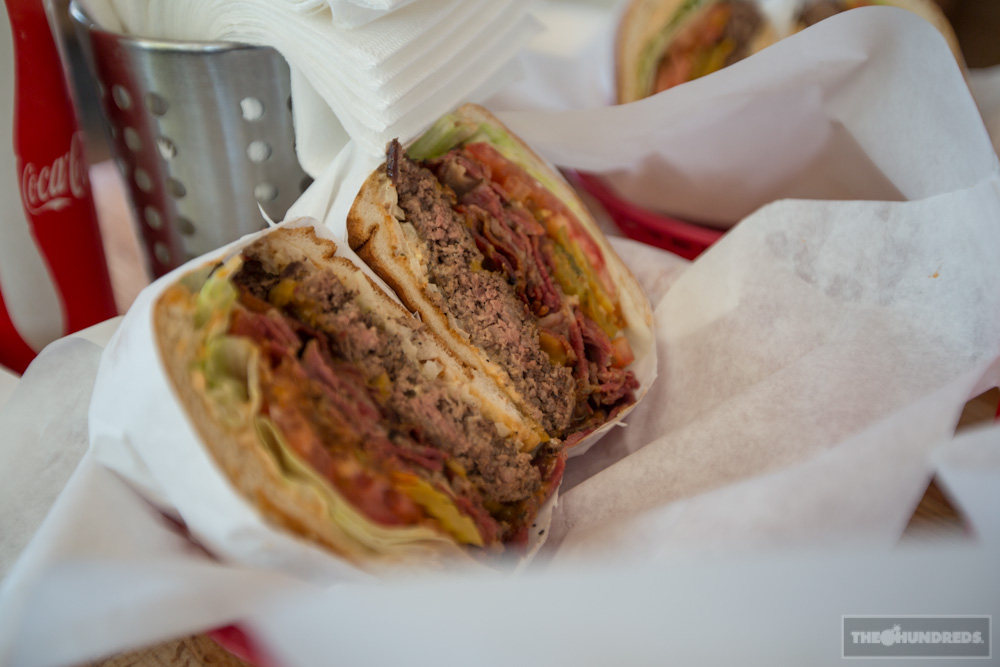 The verdict? Maybe my new favorite hamburger in Los Angeles? Too bad it’s a bit of a drive for me…

…for now. The Oinkster has just secured it’s newest location in Hollywood, which will be opening early on next year. Oh joy.