Once or twice a year, I make my way back to my parents’ house, and end up digging through the bedroom I grew up in for nostalgic treasures from my childhood. 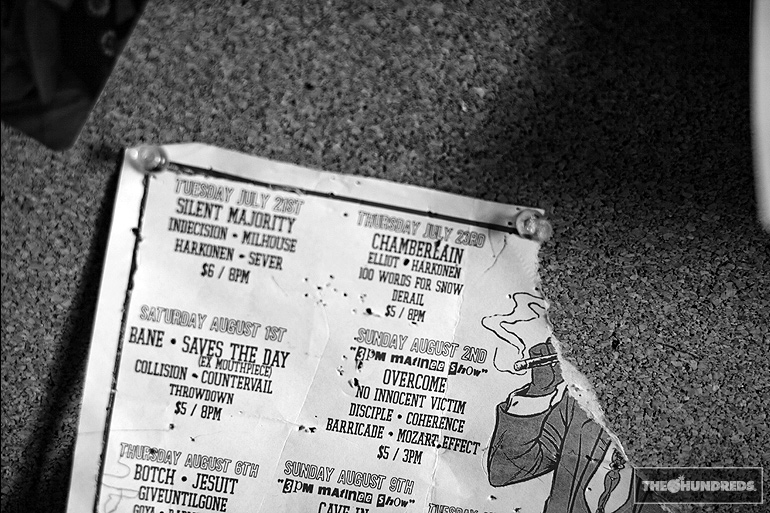 Like most kids, I collected things. Like comic books. Comic books like Garfield, Calvin & Hobbes, and Life in Hell.. and then real comic books like X-Men, anything from Image, Spawn, Eastman and Laird‘s Turtles, and Stan Sakai‘s Usagi Yojimbo. Here’s my copy of the Superman issue where he dies. I was never a fan of Superman, so I was really happy that he was dunzo. 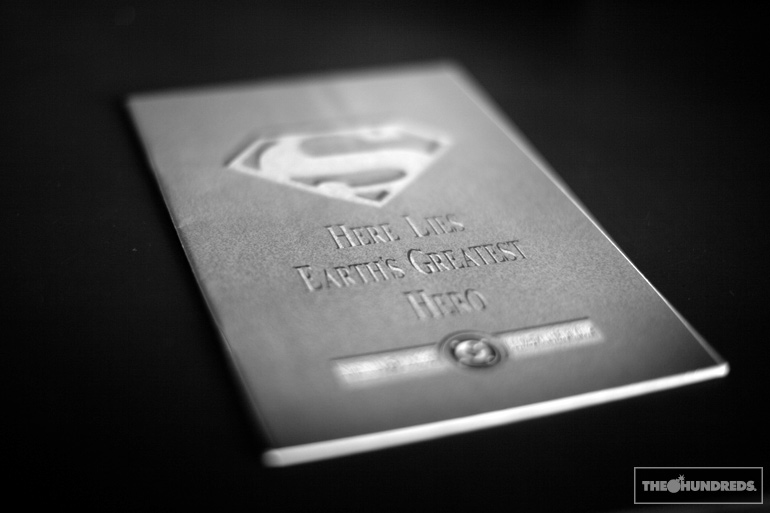 “This was the day… that a Superman died.” It was awesome and put a huge smile on my face! Unfortunately for me and the rest of the comics universe, it was all just a marketing ploy and DC did this bobo “Juuuuust kidding!” saga where there were like 4 different Supermen that reincarnated… I dunno, it was laaaame. 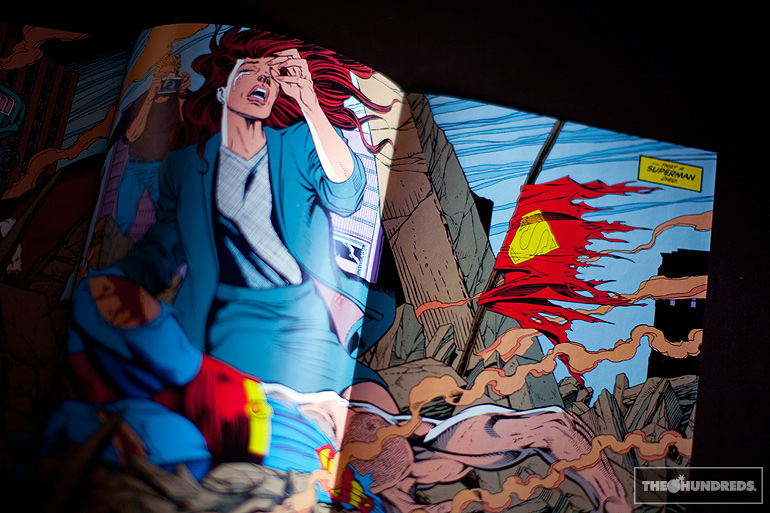 This is funny and totally something that would never catch on today. So kids, back in the ’80s, it was really cool to have a crazy pencil case to hold your utensils and drug paraphenalia and stickers. They were Transformerish cases that seemed like innocuous boxes from the outside…

…but popped open like Knight Rider in Super Pursuit Mode. Seems ridiculous by today’s standards, but it was an elementary school status symbol. My case was ghetto, I wasn’t even into Formula racecars, not sure what that was all about. I tried to cover it up with a Frank Viola sticker (???!?!) 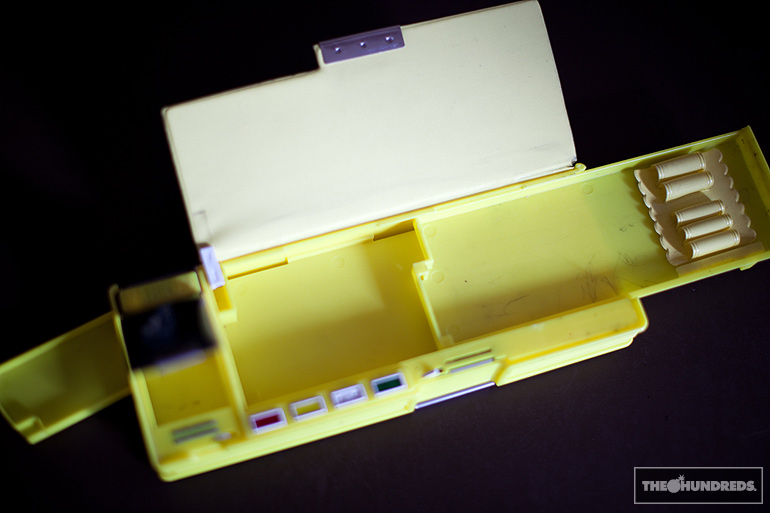 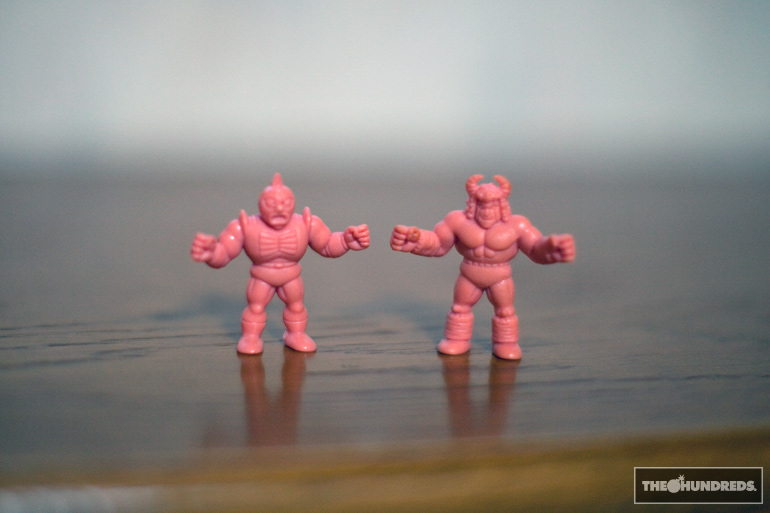 Again. Talk about a toy that would baffle the kids of today. M.U.S.C.L.E. Men were these miniature rubber figures, each character thematically different, that you’d put into a wrestling ring to fight each other. But it was more about the detail that went into each figure in creating their unique identities.. Something tells me that the kids who were into these grew up to be modern vinyl figure collectors. 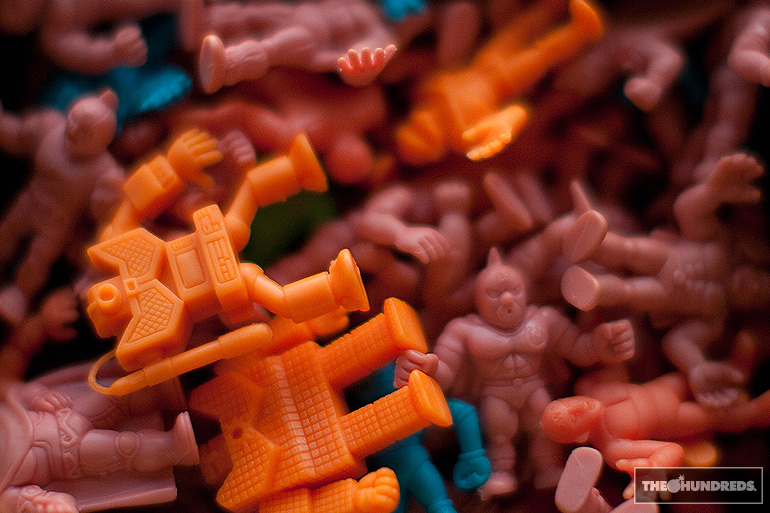 And of course, there were Garbage Pail Kids. (Well, before that, it was all about Wacky Packages, but GPK was a lot more marketable and trademark-infringing and therefore, better). 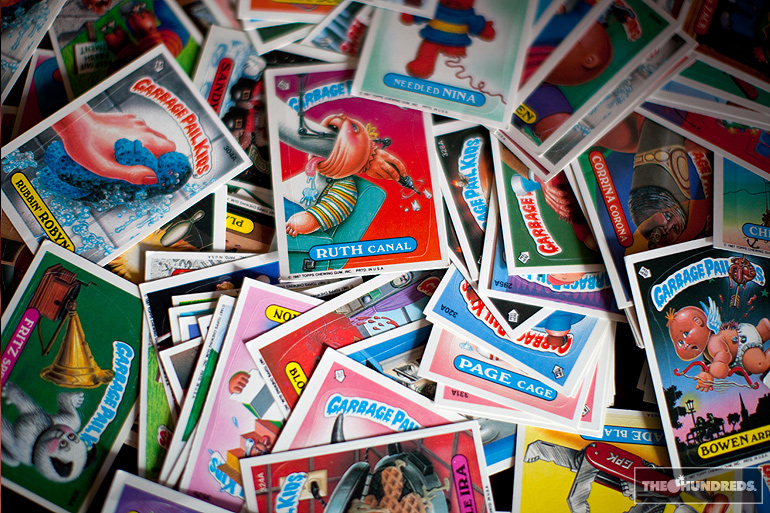 Here are some of my personal favorites. And yes, I have an Adam Bomb somewhere around here. 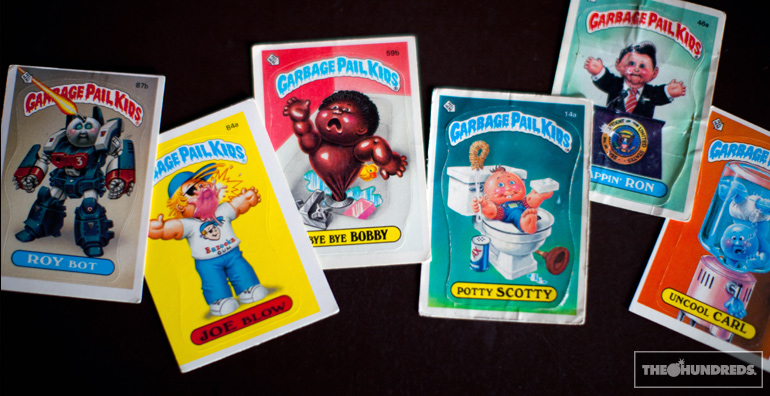 And then I graduated to baseball cards. Ryne Sandberg was my favorite ballplayer as a youth, that’s his Donruss Rookie Card. That’s Carlton Fisk’s rookie also, I guess I was into him. Remember when Wally Joyner was supposed to save mankind? Nothing like having that gold trophy in the corner of your Topps card. 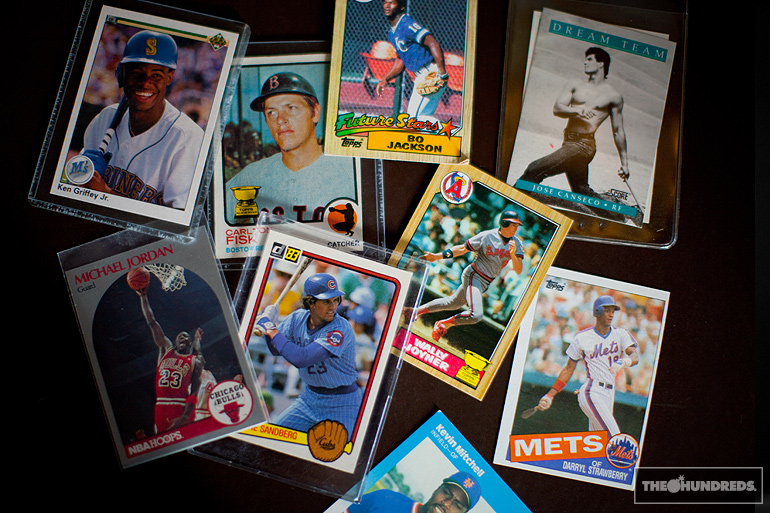 Of course my favorite baseball cards were the error cards. Sportscard companies would print cards, realize they had made design or type errors, and then re-print corrections. So the error cards would fetch big dollars amongst collectors because of their rarity. I always thought it was just a marketing scheme, and it probably was.

Perhaps the most famous of them all was the Billy Ripken ’89 Fleer error card, where he had originally written “FUCK FACE” on the butt of his bat. Fleer produced several corrections, one with whiteout, another with scribbles (I had a couple of those), and this one, the blackbox. I remember opening those Fleer packages to find a Ripken error, it felt like Charlie in Willy Wonka when he finds the golden ticket. It was like opening a bag of Shark Bites to get the Great White… x 1,000.

That was another popular one at the time. The Gary Sheffield rookie for Upper Deck. The error was subtle, if you notice his designation as shortstop, the “SS” is upside down. SStrange. 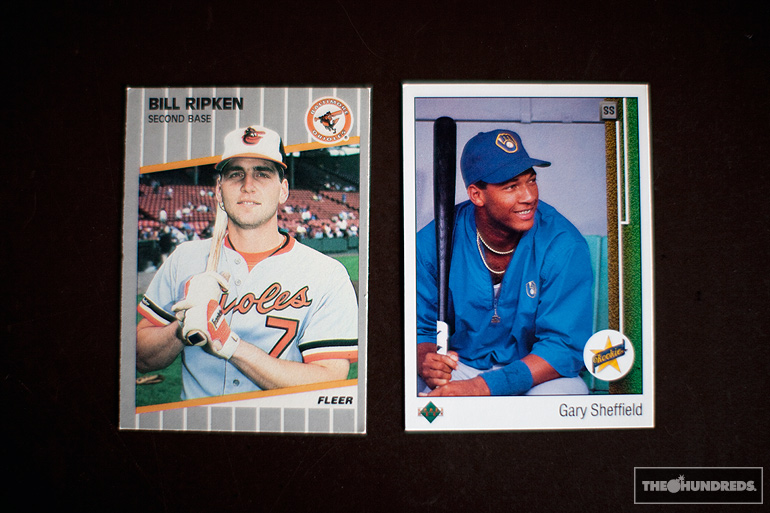 Since Al Gore was still tinkering around with his invention called The Internet, the only way you could value your cards’ worth was through monthly price guides, the most popular being Beckett. I always liked looking up the Honus Wagner to see if it had risen or fallen from its $1 Million mark. 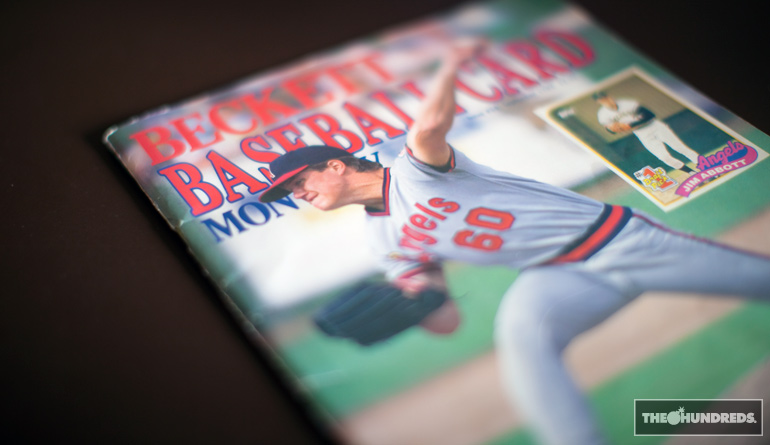 I snuck into my older brother’s room and found some of his gems. Barry Bonds looked so skinny back then… hmm interesting… 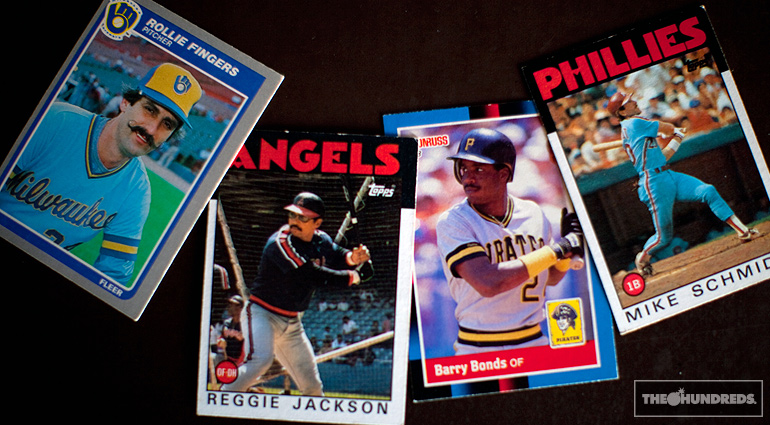 I hate him for this. That’s a Michael Jordan Fleer rookie card. It used to be mine but then he convinced me to trade him for his Ken Griffey Upper Deck rookie when I was 9. I think I lost, apparently this Michael Jordan character was even inducted into the Hall of Fame.? 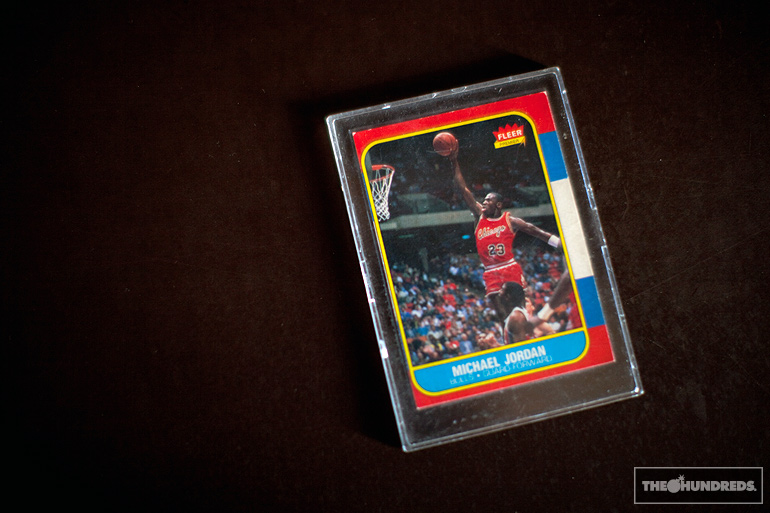 What else can I show you? Although I had all this stuff, at the end of the day, I was always more into creating and making. I still have stacks of voluminous short stories and poetry I wrote as a kid, my writing style is the same today as it was when I was 8. It’s pretty bizarre, and not sure if that’s a good thing or bad thing.

Here are some drawings from when I was 11. I was really into architecture and drafting, but then again at that age I was into everything. That’s the great part about being 11. You’re just starting to figure it all out… 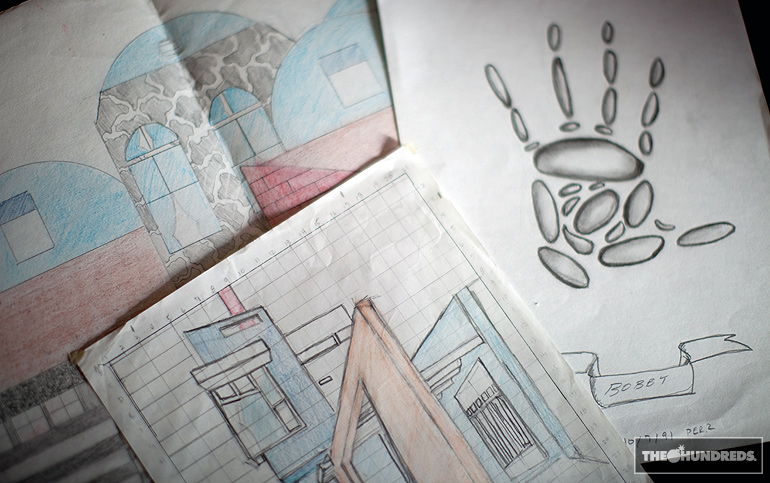 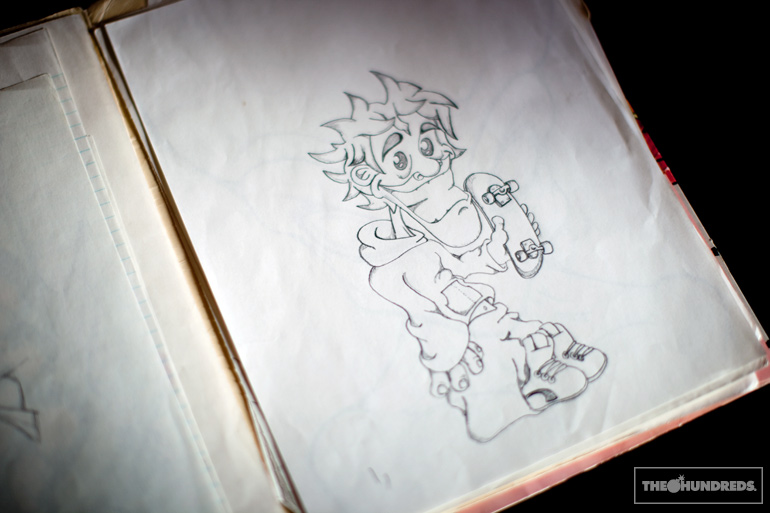