Yesterday was May Day, and as pro-immigration rallies and protests charged forward throughout the States, downtown Los Angeles followed suit. Tens of thousands of activists marched through Broadway, raising awareness for immigration reform, amnesty for illegal immigrants, and calling on an end to raids on undocumented workers.

It was an awesome spectacle, and if you’ve never attended an event like this, trust me, it’s an adrenaline rollercoaster. The people united.. it’s a sensation of invincibility and empowerment knowing that you’ve got the government, media, and world, by the balls. To gather in a likeminded community that are all seeking change, it inspires on so many levels.. 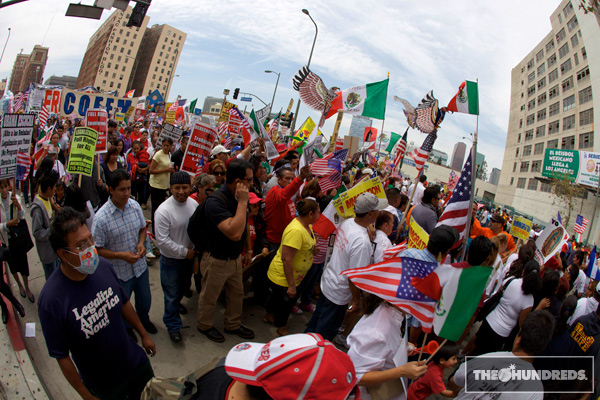 WIthout letting my politics seep into it, I wanted to show you all the raw, impassioned spirit of a determined people. Whether or not you agree with their perspective, you must admire their zeal and fervor. Their fight. Sometimes I get bummed that the youth have become so entrenched in apathy, jaded to corporate takeover, to government running rampant through our lives, and lacking a defined opinion on issues that directly matter to our community. But then I look around at rallies like this, and it renews that sense of relevance and urgency.

Trust me, t-shirts and sneakers and baseball caps are all great fun. But look into the eyes of these people, listen to their collective voice, and you will see that there are much more real and visceral forces that encompass peoples’ lives beyond material consumption.

The #1 question we get asked is what “The Hundreds” means. Indeed, you’re looking at the definition. Get involved. 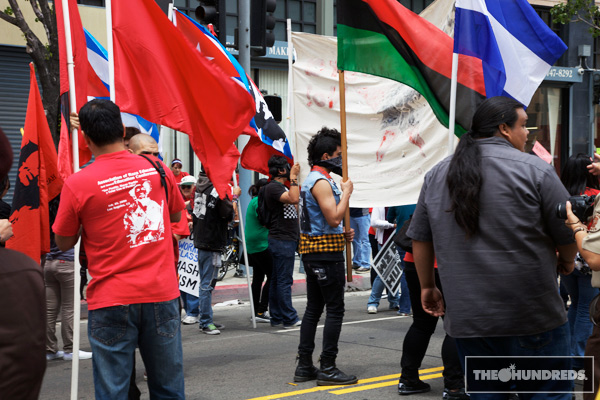 This fellow had a voice that barreled through the streets of downtown L.A. Being confined to a wheelchair was the least of his concerns, his heart was greater than that of 15 men. 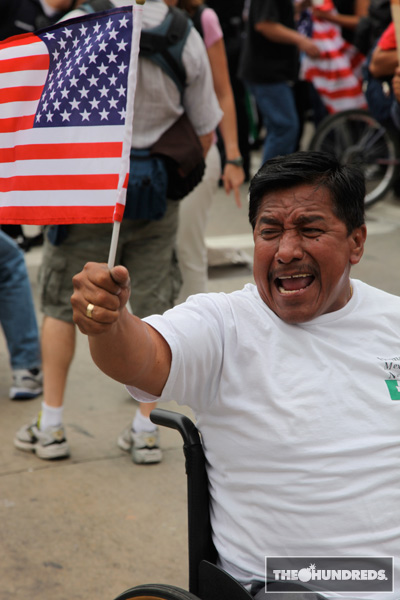 A family affair for most. As it should be. 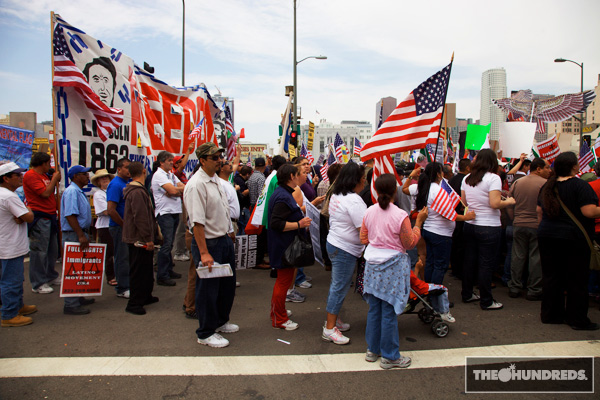 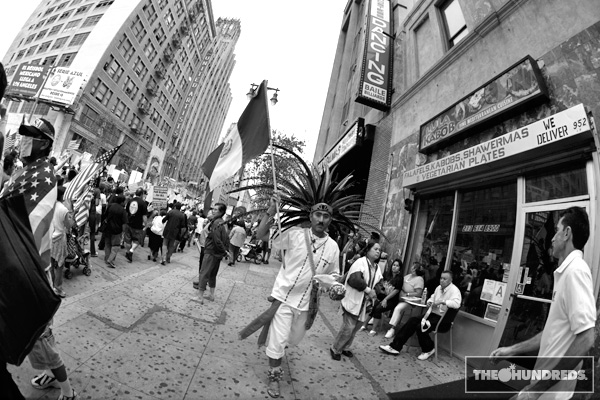 So many stories going on within this image. 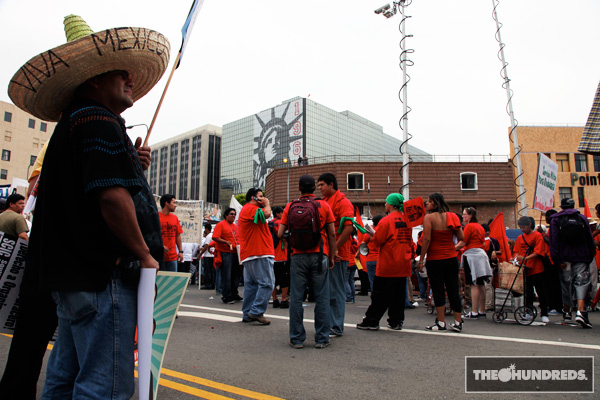 The call to action brought forth diverse factions of subversive groups, from farmworkers to peacekeepers, to the masked Communists. 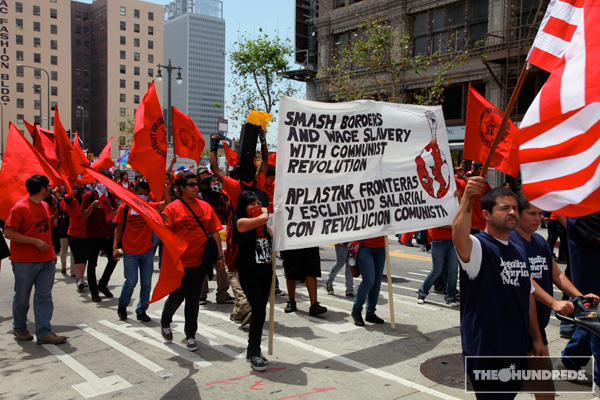 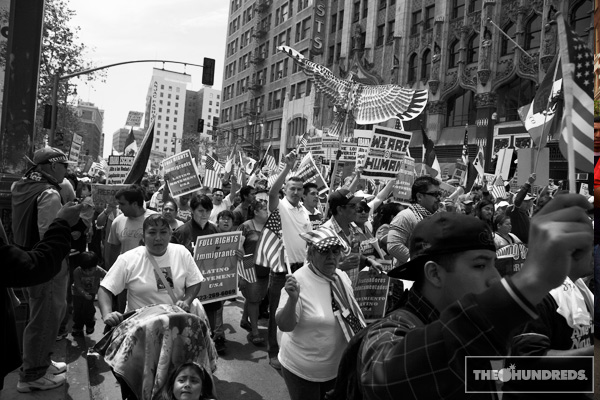 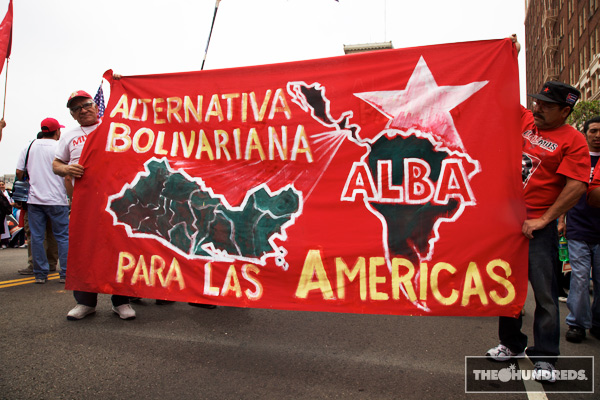 This guy is my hero. (And yes, I know that comes from a guy who co-owns a clothing company.) 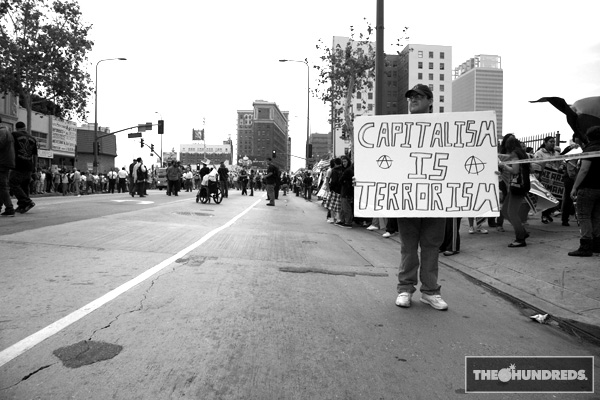 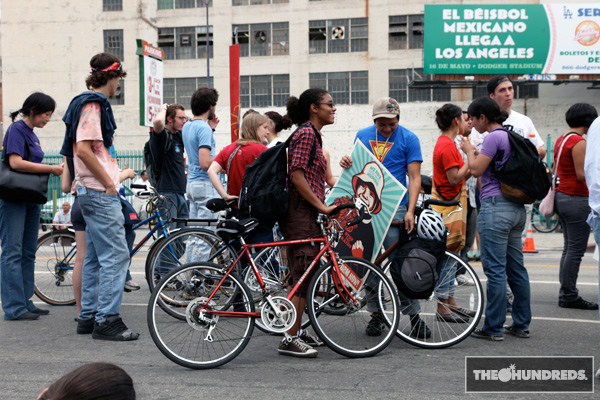 For some, perhaps just a (media) circus. 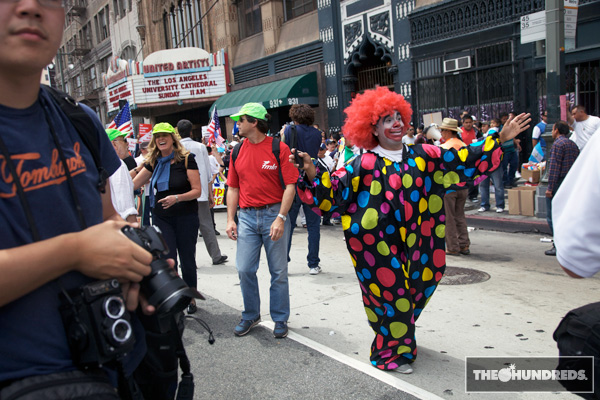 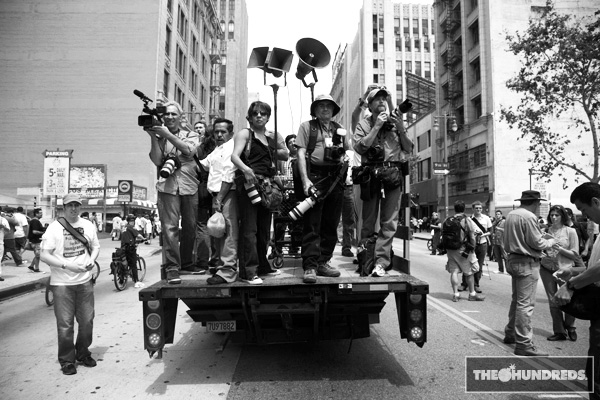 For others, life and death. 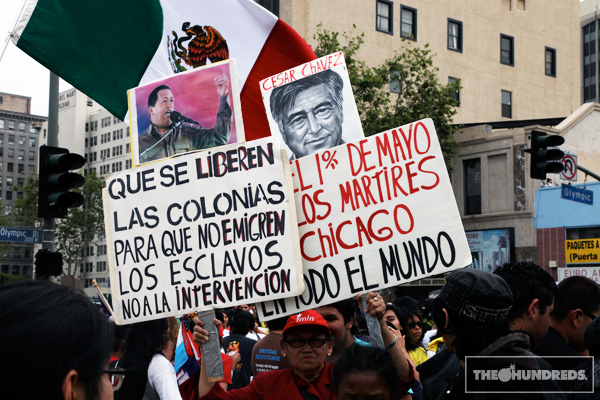 Punk band Avail has a chorus that rings “What the hell are you fighting for? / I hope it’s something you really believe in / ‘Cuz someone got a fist in the face because you’re feeling weak / And you’re causing all these problems that nobody needs!”

At first glance, these guys seemed like emptyheaded rabblerousers themselves. But they turned out to be erudite in their convictions. Again, inspiring to see young dudes like this willing to be arrested for their cause, and educated in their reasoning. 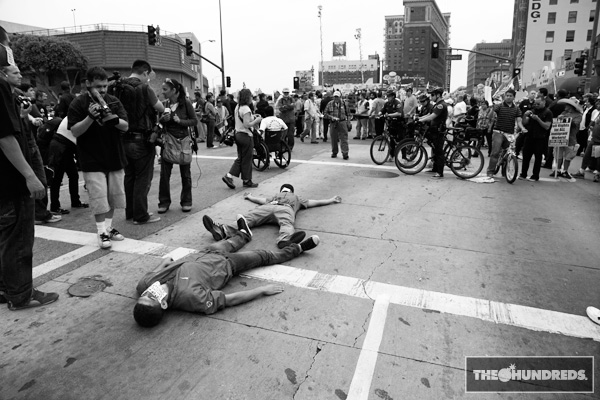 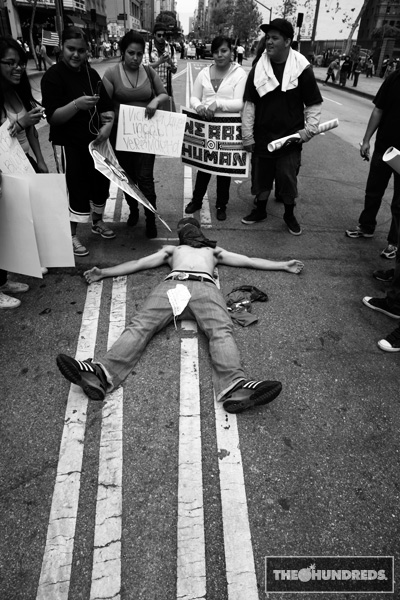 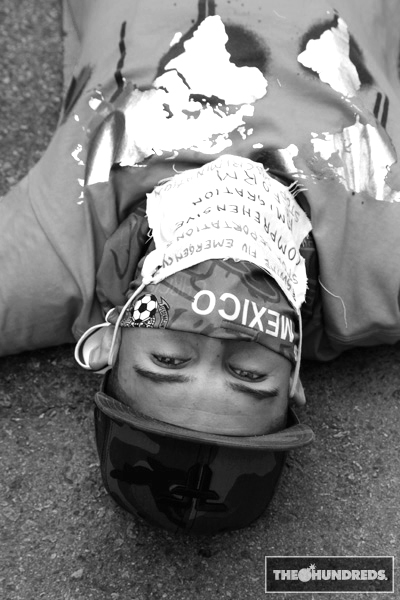 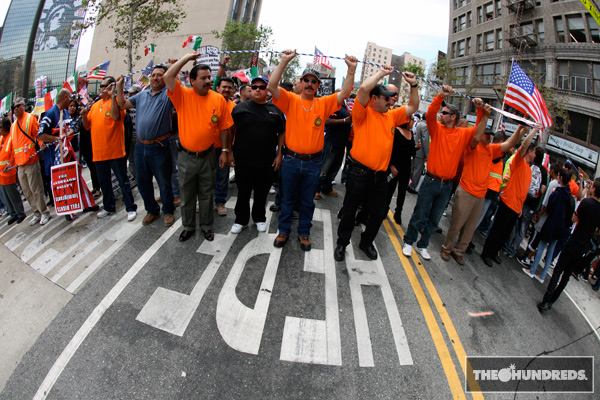 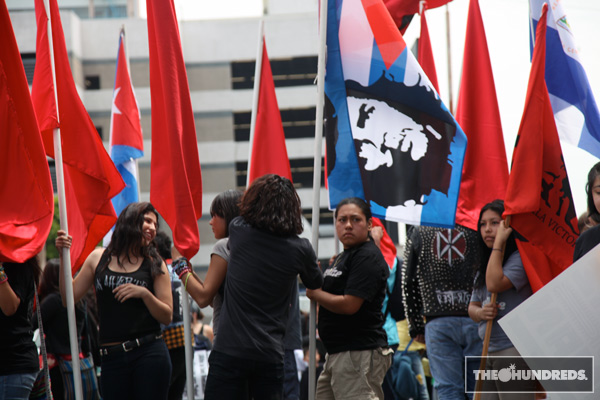 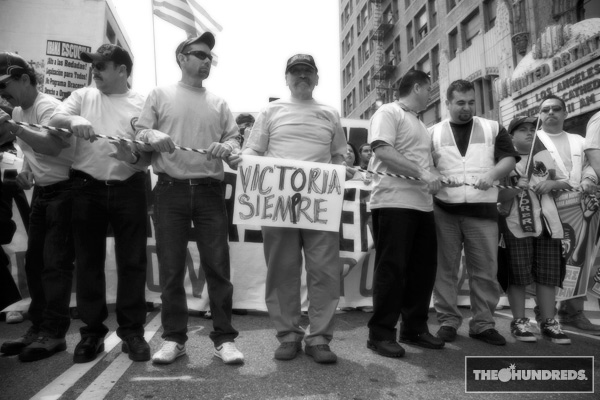 So if you ever see these neon-green caps bordering marches and rallies, be comforted. Those are NLG (National Lawyers Guild) members – law students and lawyers, versed in the law, and volunteering to protect activists from police wrongs. They basically watch out for the people in case the cops get out of hand (as they did at May Day 2007), record and document, and make sure justice is served. I have the honor of owning one of these hats as well. 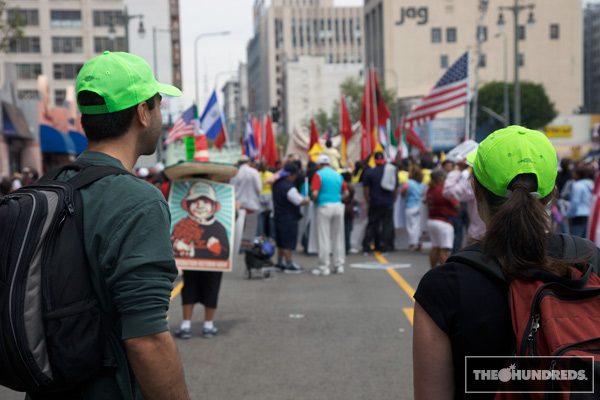 These guys are supposed to be there to watch out for you as well. To protect and to serve,right? 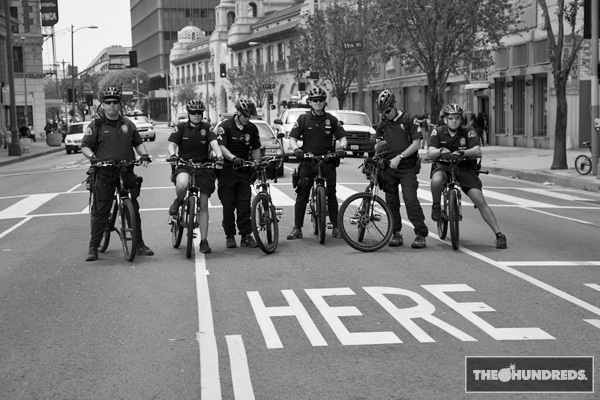 Sorry world, this is the greatest country on Earth. 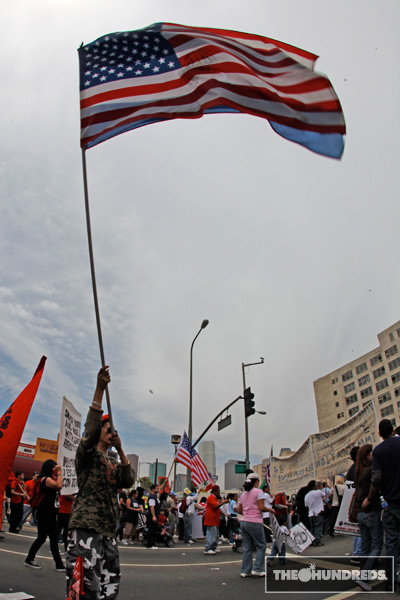