After three years in downtown Los Angeles, we’ve moved The Hundreds HeadQuarters into the greener and stinkier pastures of Vernon, right on the outskirts of the city. Vernon is an industrial zone for mass fashion; our neighbors are the big boys at Forever 21 and Guess, BCBG and Citizens of Humanity. The most notable landmark of this forgotten land, however, is the Farmer John packing plant that greets you at Vernon’s entrance: 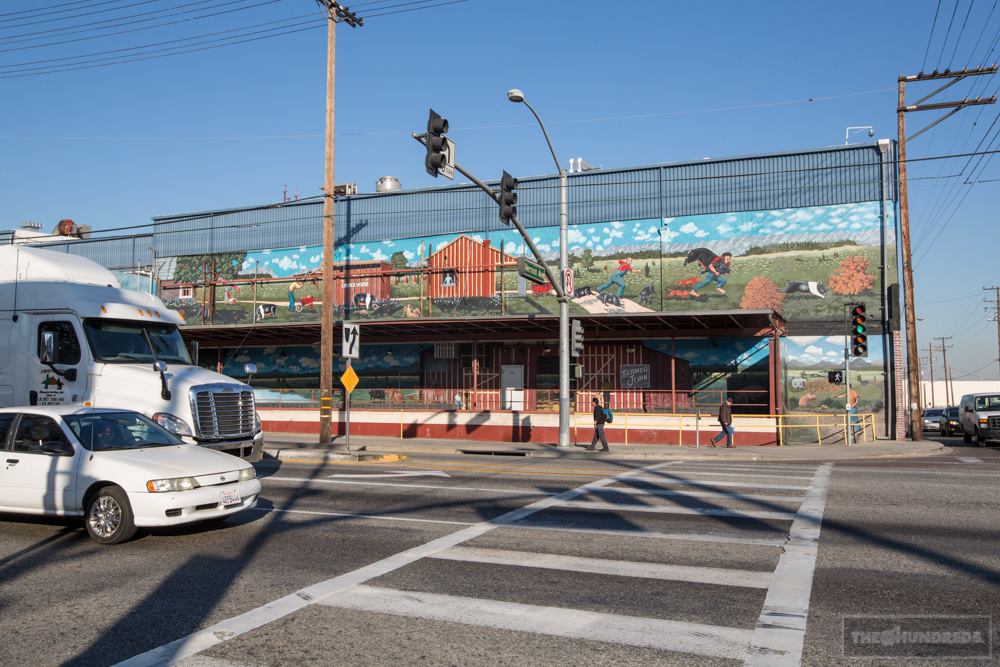 There was once a time when meat factories lined this row but over the years, they sought cheaper land and got sucked into the Midwest. Farmer John stayed behind, excising all other meat production to focus solely on pig parts. Pork, bacon, ham, sausages, even those finger-lickin’ Dodger dogs that Angelenos love, that’s what Farmer John does best. It’s estimated that over 6,000 pigs are slaughtered here daily — and these aren’t cuddly Wilburs we’re talking about. No, when I say “pigs” I mean genetically supersized robo-boars, freakishly mutated creatures the size of a Prius, the grunt of a drugged Triceratops from Jurassic Park, hulking shoulders like Bane. That’s it, these pigs look like Bane (and sound like him too). 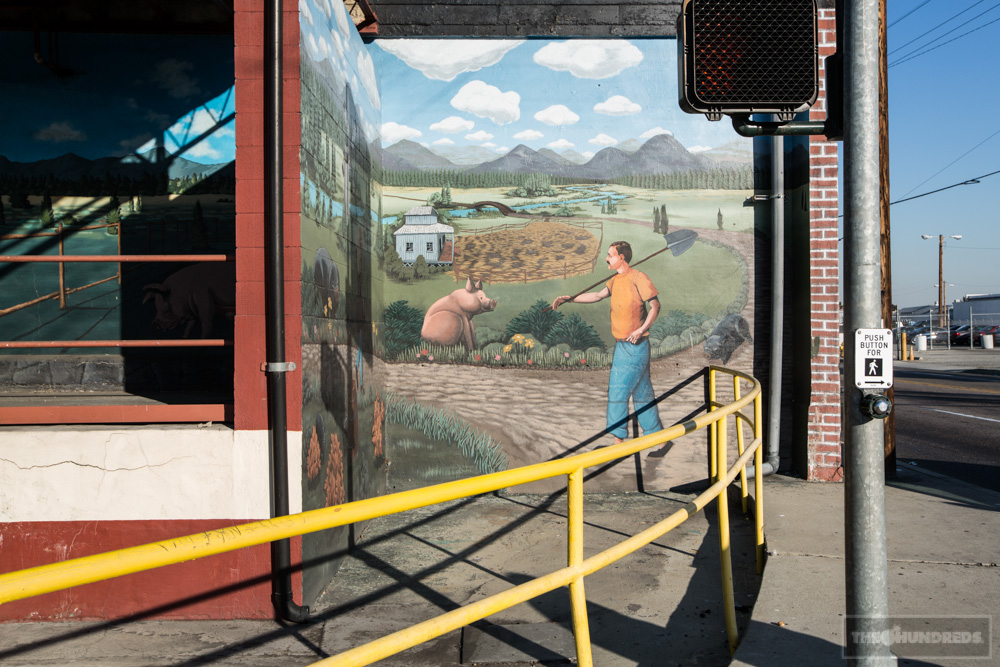 Every morning on my way to work, I’m pinched between miles of semi trucks caging these helpless beasts like pigs on their way to slaughter. Oh wait, they are pigs on their way to slaughter. And as the hogs’ tumescent eyes bulge desperately out the trailers’ steel slots, you kinda can’t ignore the irony of the Farmer John building mural and the deranged mayhem that churns in the jailyard beyond the walls.

The beautifully painted mural that wraps Farmer John depicts pigs frolicking happily in idyllic meadows alongside farmers and their children, taking naps, play-wrestling, and adopting human characteristics like wearing baseball caps and flying warplanes. Of course, all while their ill-fated cousins are being eviscerated on the inside. 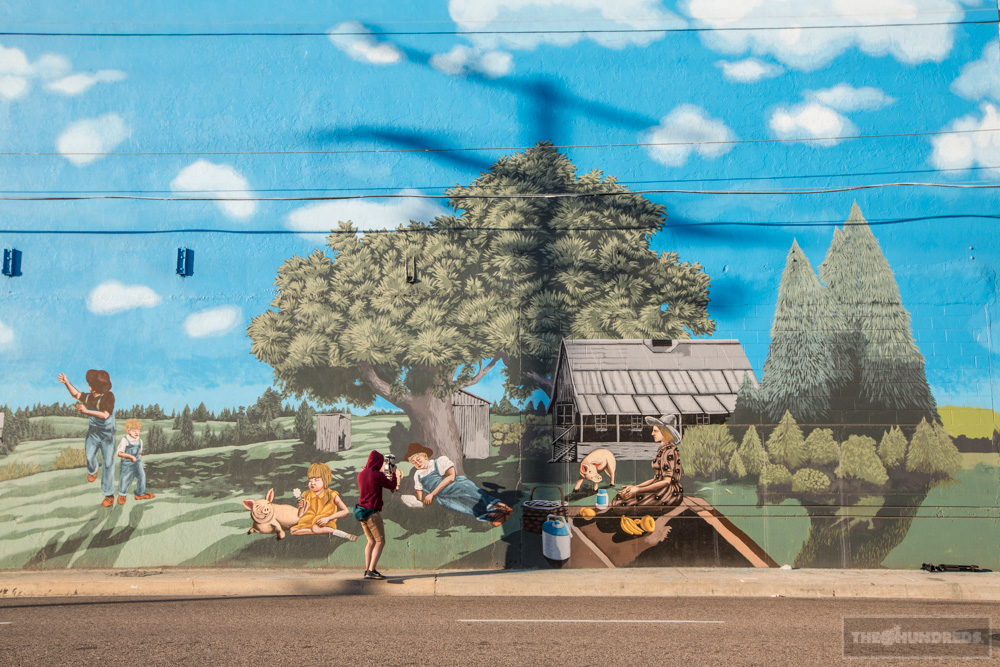 The Farmer John mural holds a page of L.A. history, not just for its ridiculousness but for the artistic commitment and also straight-up eeriness. Commissioned in 1957 by Farmer John to mask the mass genocide within, artist Les Grimes painted the walls (which span entire city blocks) for 11 years before brushing up some clouds and falling off the scaffolding to his untimely demise. In the half-century since, various artists have carried out the mission, including Austrian artist Arno Jordan who worked on the piece for 30 years until his mysterious disappearance. Urban legend holds that he fell into the blender, his bones pulverized and crushed, mixed into sausage tubes with pig innards, and eaten by residents throughout the Southland. (I embellished that one a bit, but really, he just up and vanished.) The mural has become stuff of pop-culture lore, in fact John Travolta and his cronies scale the wall to hijack the pigs’ blood they dump on Sissy Spacek inCarrie. 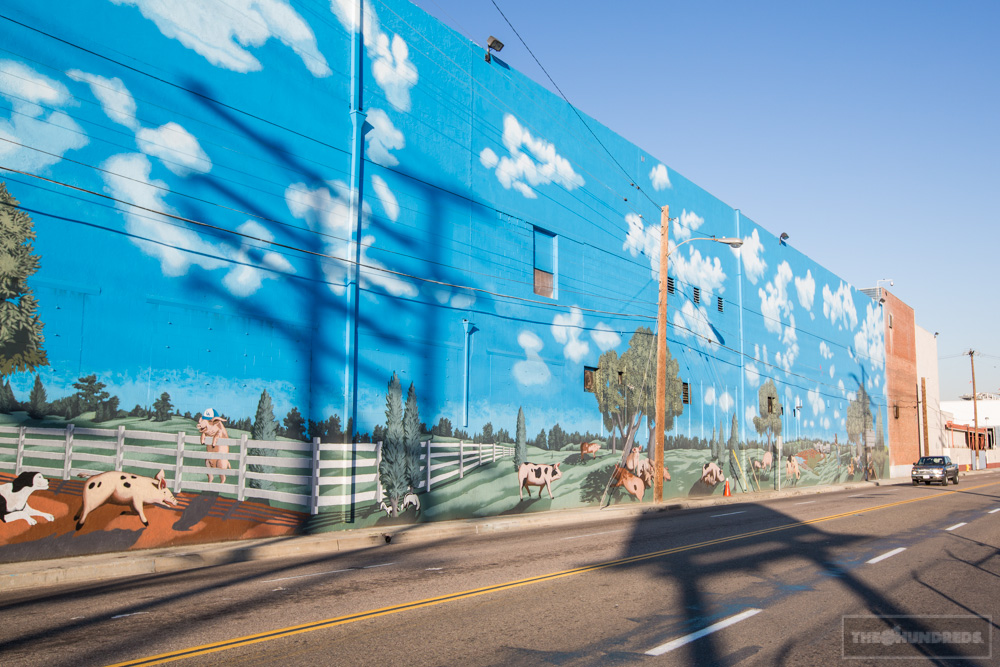 But it’s a lie. The mural, as beautiful and historical as it is, is a lie.

So we did something about it. We hunted down the most recent painters who touched the Farmer John mural (Clawgrip Hearts) and commissioned them to conclude the story on OUR walls. Except this time, grant the pigs retribution and imagine their merciless revenge on the farmers who so peacefully coexisted with them in the original scene. In this redemption sequel, the baseball-capped piggy from the original is backed up by his bat-wielding homeboys, the farmers are flamed, shot, chainsawed, whacked, hung, and speared by a malicious and vindictive crew. It’s a tale of justice, David taking down Goliath, fighting back, it’s another allegory of our brand.

Our re-appropriation of the Farmer John mural now exists at the entrance of The Hundreds’ new office and warehouse space in Vernon and it’s always an appropriate reminder to all of us starting off our workday – as the little guys going after the big dudes, we’re here to setup the upset and upset the setup.

This one’s for all the fallen pigs, may you rest in our piece: 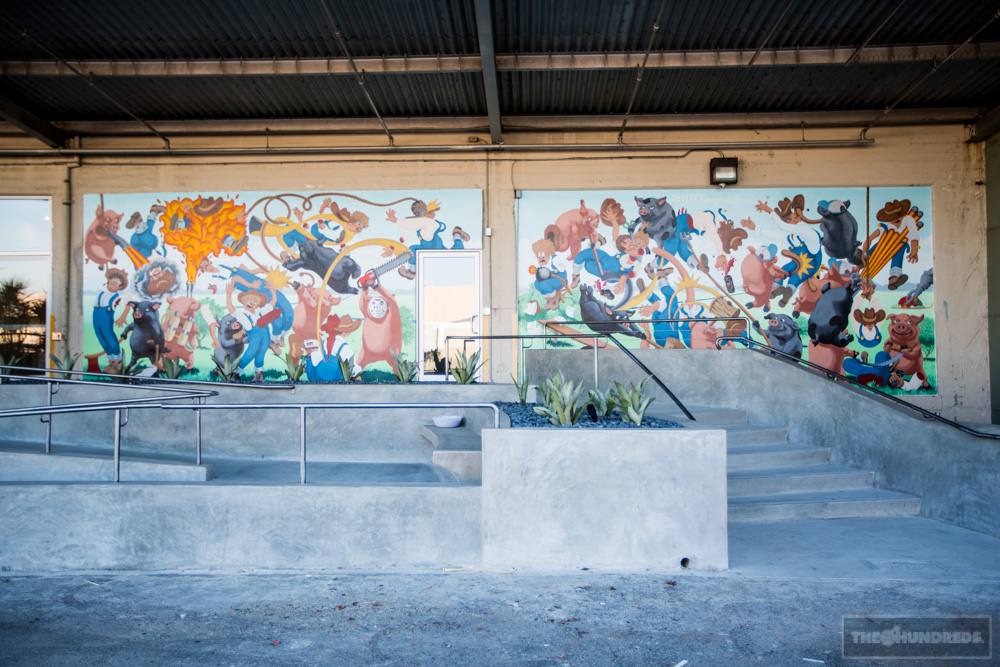 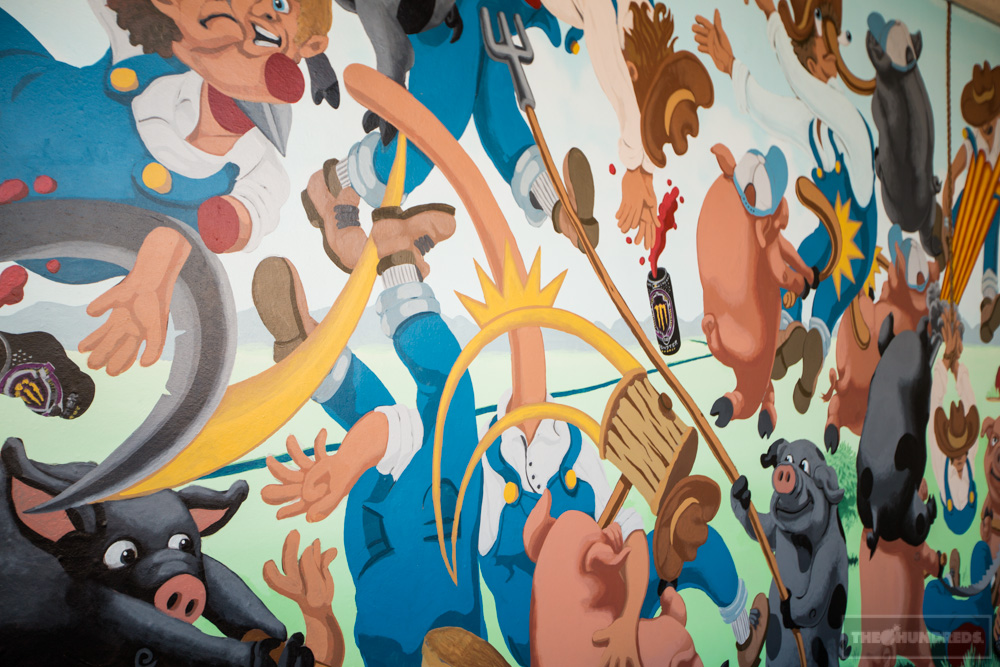 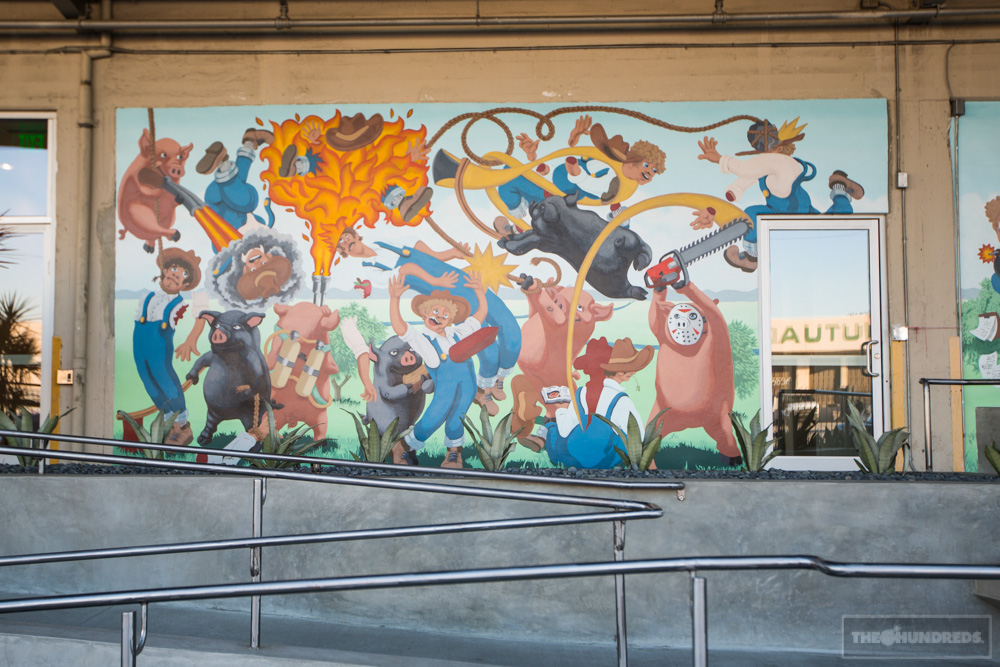 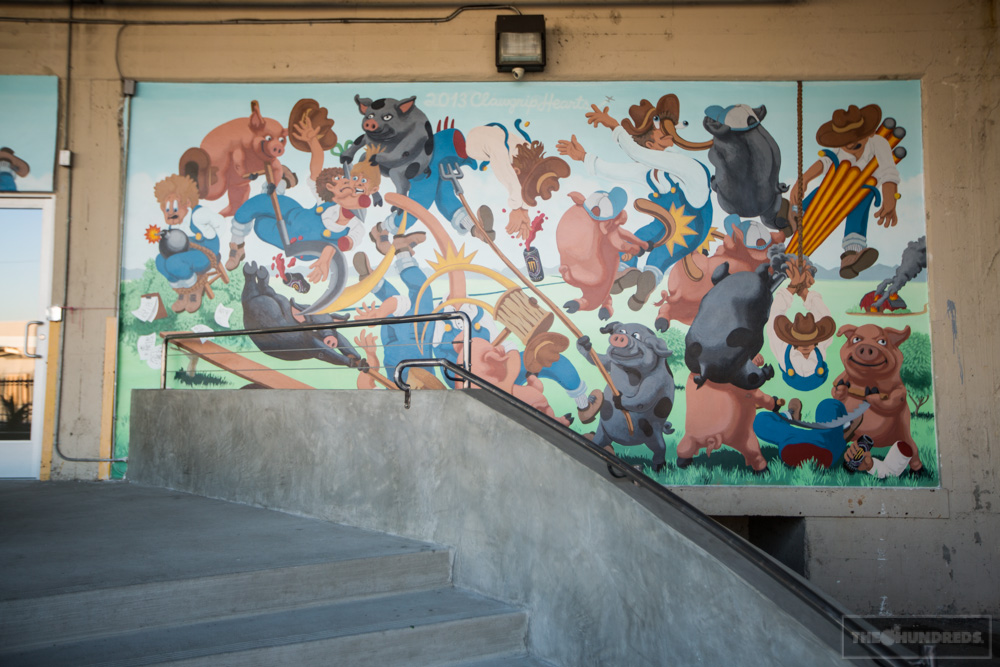