They have this saying in New York, “brick,” for cold weather. The first day of our New York Sale, it felt like a truckload of bricks fell on my head. 30 degrees Fahrenheit? In Cali-speak, that might as well be negative 15. I put everything in my suitcase on. If it was socially acceptable, I would’ve worn the suitcase also.

Anyways, the first kids in line were out since 4am. I don’t know how they did it in the cold, maybe they’re reptiles. Some of the Boston kids didn’t even have jackets, just a tee and hoody on. My jacket was so big, it looked like I was still wrapped in my down comforter from the hotel bed. 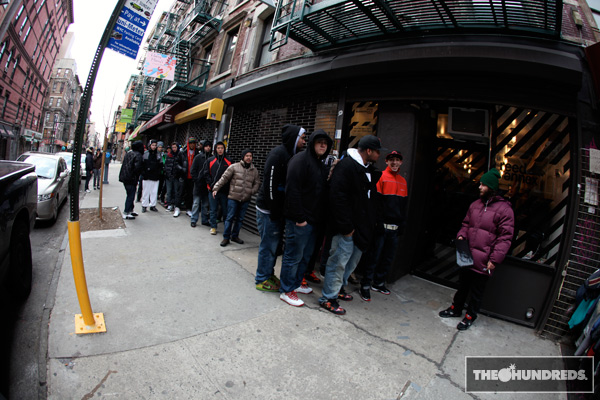 These guys were good dudes. Plus, skaters. The one on the left has been down with TH for 4 years and spread the word to his friend and brother. He gets a little bummed when he sees random heads wearing The Hundreds now, but understands it’s part of the process. They’re all stoked on our Johnson shoes though. 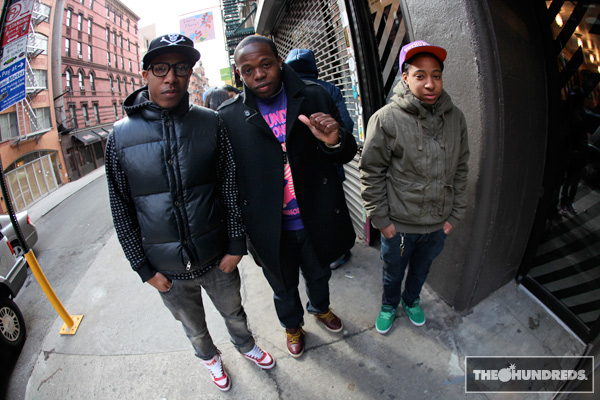 Talk about 4 years. This is one of our earliest shirts, this guy picked it up off Digital Gravel almost 5 years ago and never looked back. 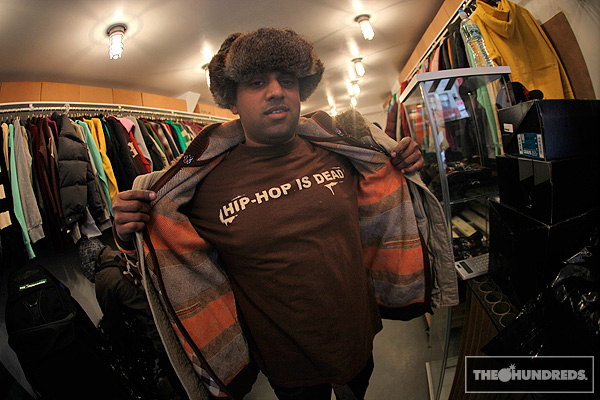 This guy was complaining about being late for work. Where’s work? “I work for a gameshow.” Yeah? What gameshow? “Who Wants to be a Millionaire?” Rad. What do you do there? “I research the questions.” Impressive. He was still an hour late for work though. 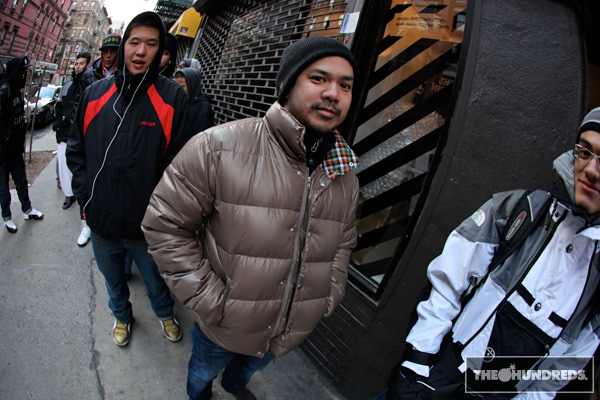 And speaking of jobs, this fella’s in the Navy. And because of the sale, missed his flight today to be deployed to Iraq! I asked him how he felt about being in Iraq for the next year, far from his hometown of San Diego. The answer wasn’t enthusiastic. Thanks for your service my man and good luck out there. 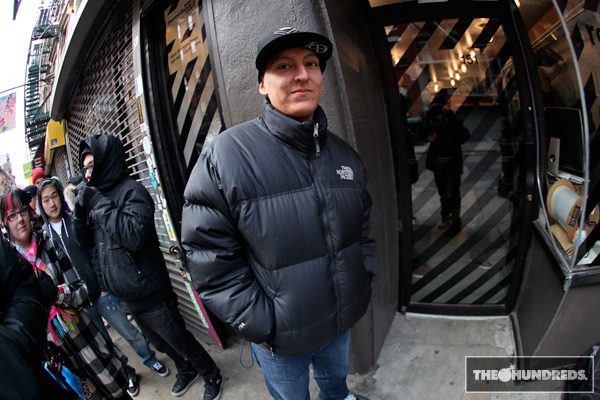 This dude was inspired by The Hundreds to launch his own brand, Only Ones. 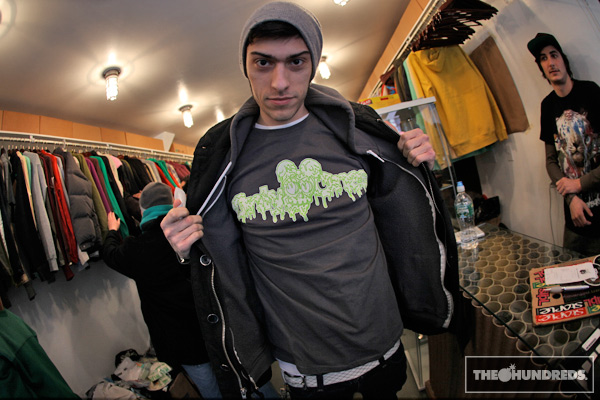 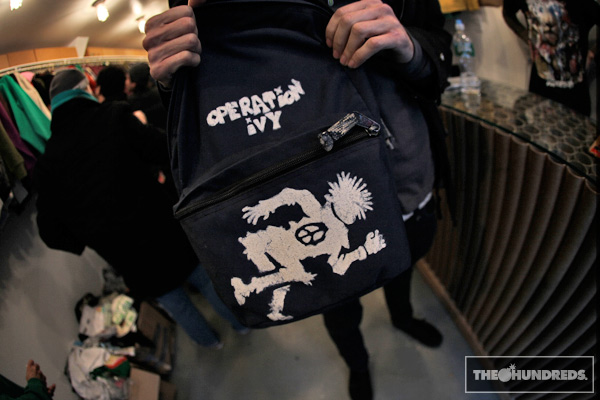 So this couple hails from Ohio. It’s his birthday tomorrow, the big 23. She recently moved here to New York for fashion schooling, so he went and did something pretty intense. 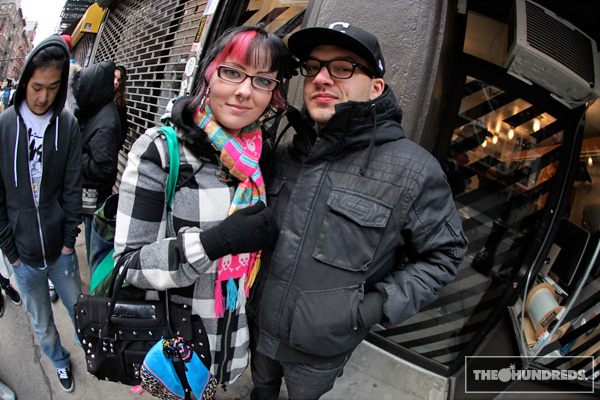 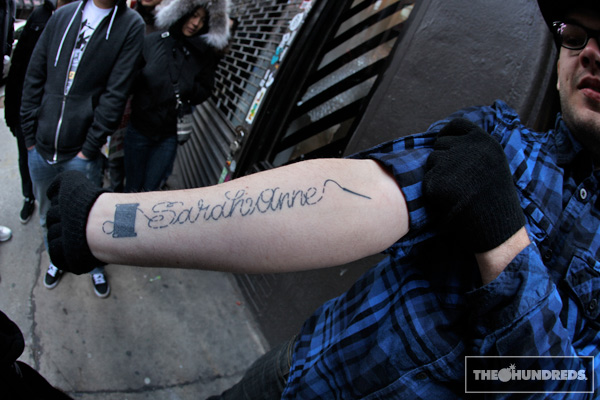 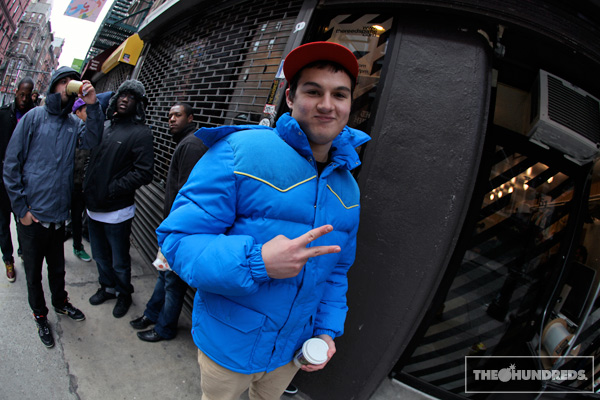 This is Martin, and Matt Cohen on the right. Matt asked me for an interview for his website, It’s Bongo Boy. And, a video interview at that. If you’re aware of my history with this, over the past couple years, I haven’t been too keen on lending out many interviews. Mainly because I don’t feel like I have anything fresh to contribute that people can’t already find online in a past article or video, and honestly, I’m not that exciting and have a tendency to ramble about nothing in particular.

But then Matt told me about his project, and his current posted interviews with the likes of Russ (SSUR) and Ron English. And the kicker, he told me he was 13 years old. Of course, I had to do it. You can already check the interview from just a few hours ago, posted on Matt’s site HERE. (I made a mistake in the interview, see if you spot it.) 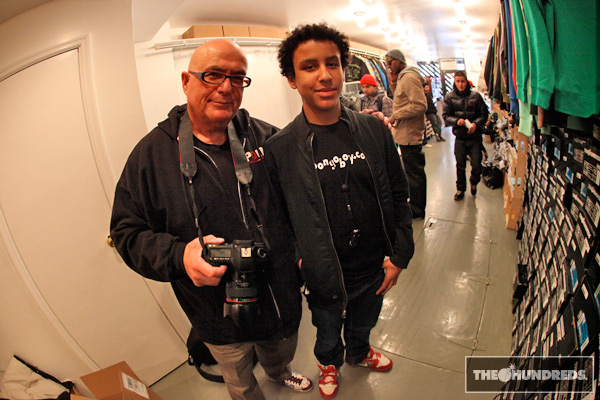 There’s Something About Abby. 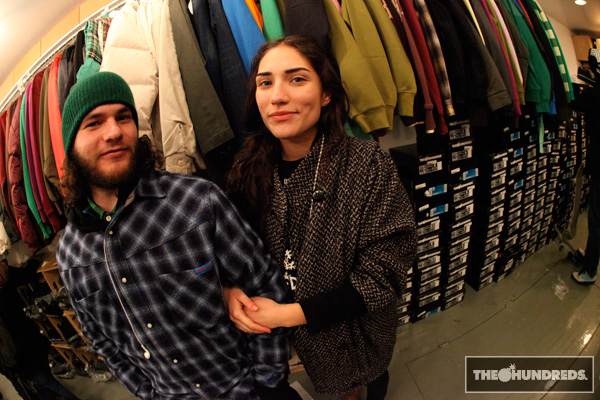 THSF heads might recognize Nick and Tony. Jen brought us some food. Ben ate most of it. Thanks, I’m starving. 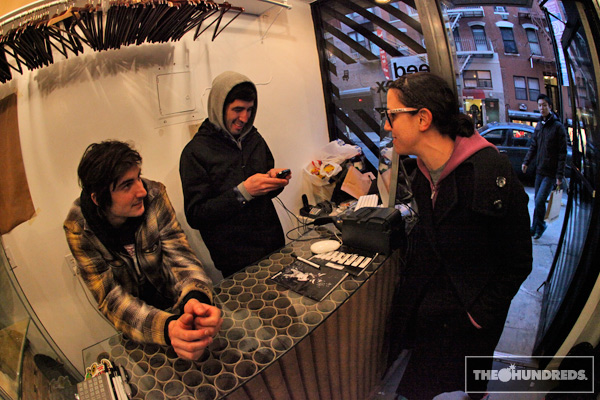 Have you seen that movie Step Brothers? 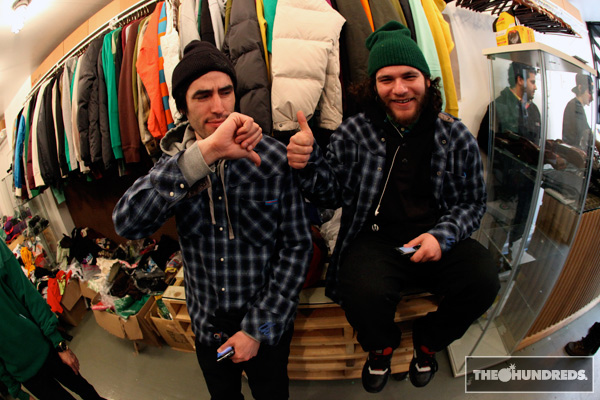 Don’t forget, The Hundreds’ New York Sale continues through the weekend at Reed Annex, next door to The Reed Space at 151 Orchard. Saturday morning, we’ll be opening at 11am instead of the 9 as posted. Don’t sleep.