ALL IN ALL :: THE WORLD IS MY OFFICE

Superbowl to me is what Christmas is to Jews.  I’m not only alienated by all the macho pageantry, but totally confused as to why everyone is so amped up over some caveman game.  At least I used to have the commercials to look forward to, but now those are already leaked the week before on the Internet.  And the halftime show is always an exhibition of American mediocrity.  Let’s get the most agreeable, lowest-common-denominator music artists to perform.  Not even an ornamented nipple could spice things up.

So instead, I spend my Superbowl Sundays being the guy grilling all the burgers and eating all the dip, pretending like I know what I’m talking about (from as much web research I could get in on both teams that morning), and gossiping on the porch with the girls. 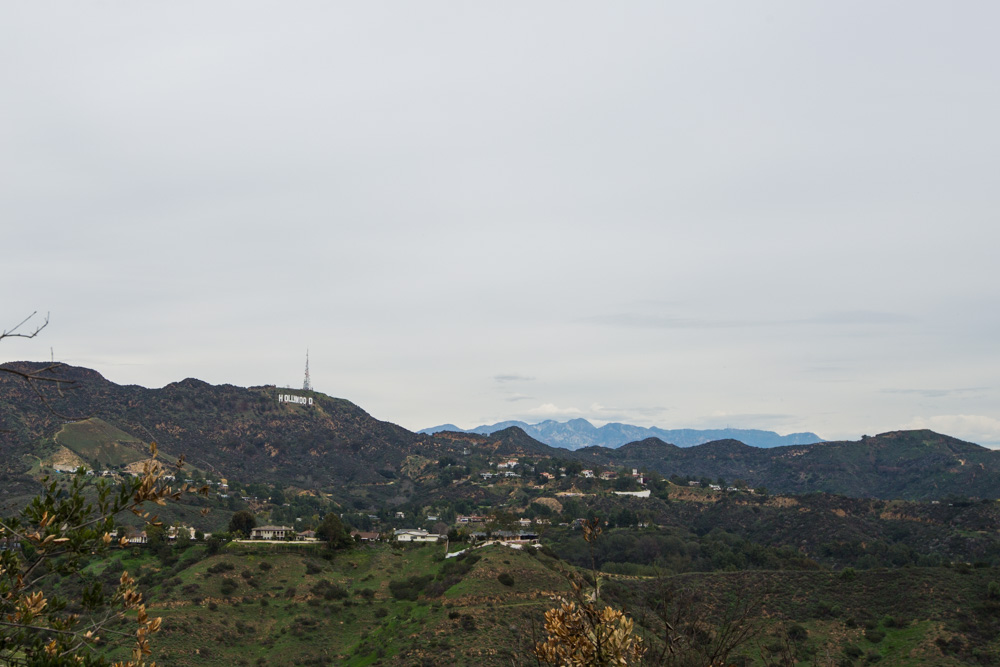 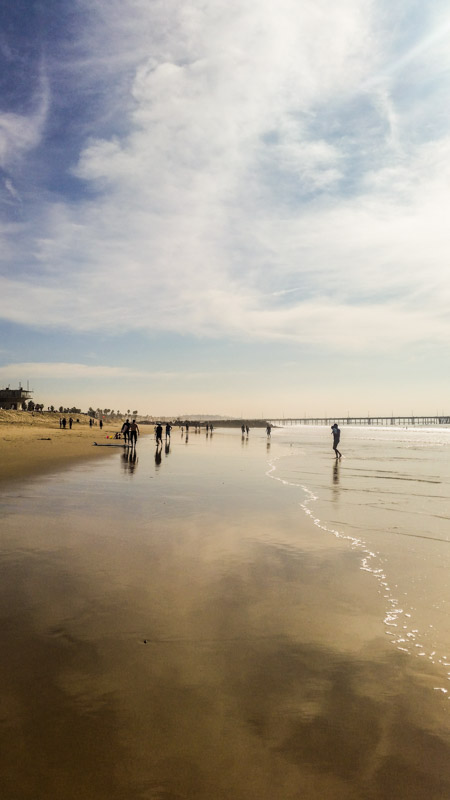 But back to blogging.  Alex Spit has been down with The Hundreds ever since he was on the floor at The Hundreds San Francisco.  We’ve got some bigger and better projects lined up with the artist throughout this year; Get ready, Los Angeles. 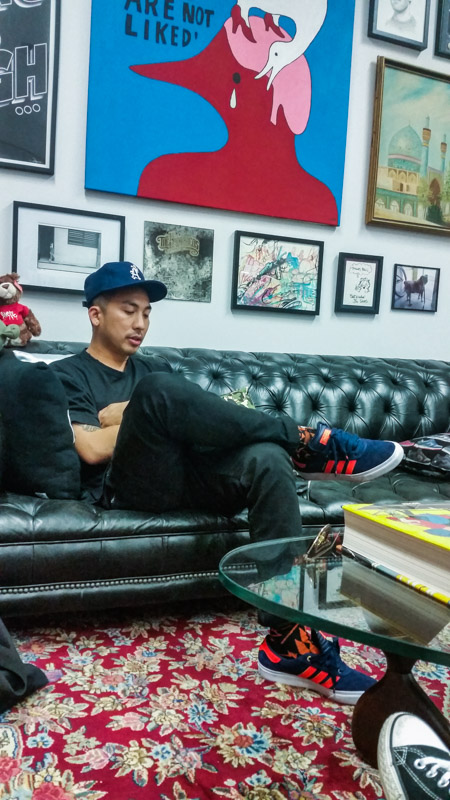 Spit’s one of the first with our adidas collaboration: the “Crush.” 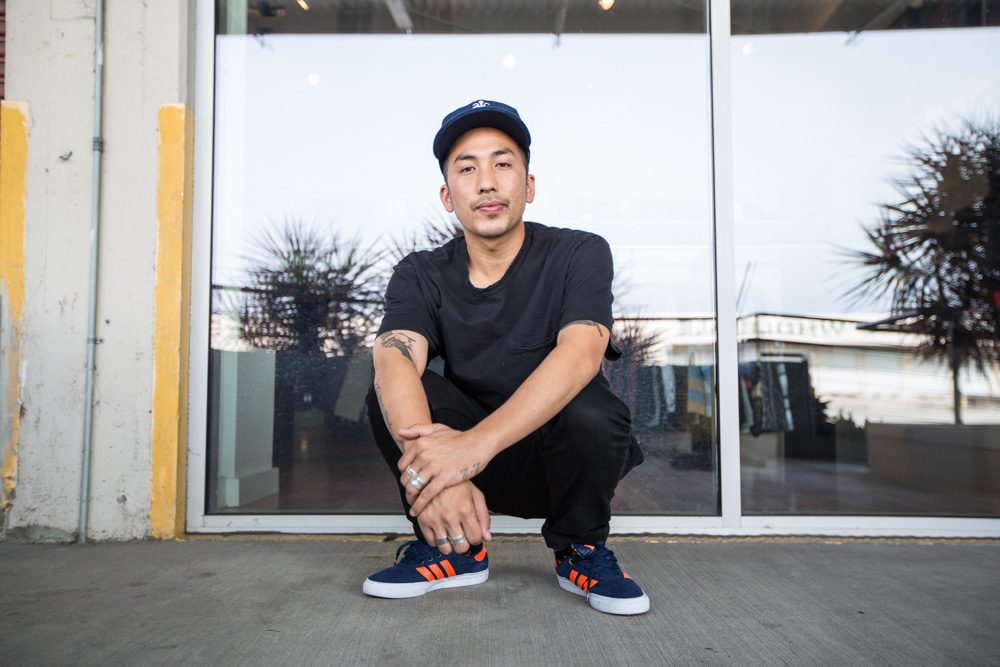 Never a dull day at The Hundreds Homebase.  V-Nasty shows up outta nowhere.  Haven’t seen or heard from the White Girl Mob-ster in years, but she’s still alive, still kickin’.  Remember our “The Life in a Day” video with Vanessa?  Just hit 400k views… 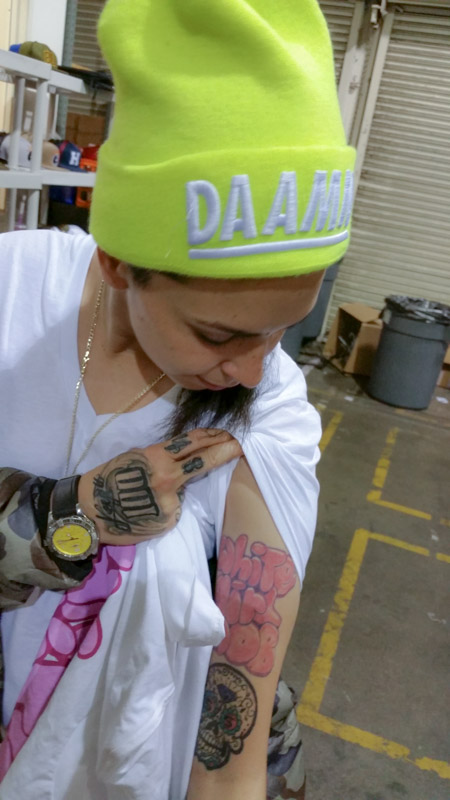 Had a gut-busting afternoon with Joshy from Rebel8, not just from the Israeli shawarma lunch in Santee, but the funny work stories passed back and forth.  I love Joshy, Vitti, Giant, and the rest of their crew – they always feel like cousins to The Hundreds.  Daggers’ Eddie Reategui built their warehouse ramp as well – (you can watch our interview with Eddie here) 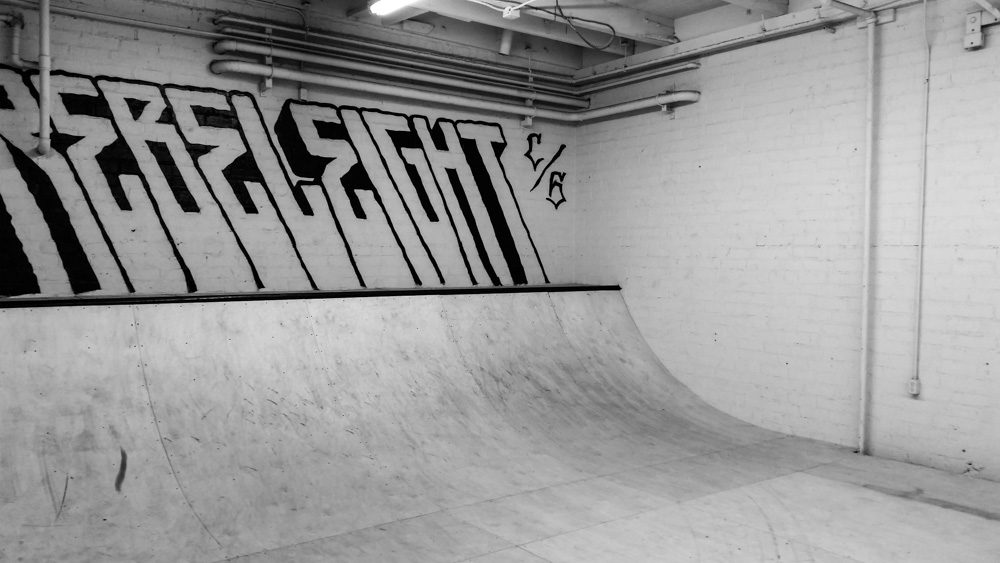 Rebel8 truly has one of the coolest offices in our industry. 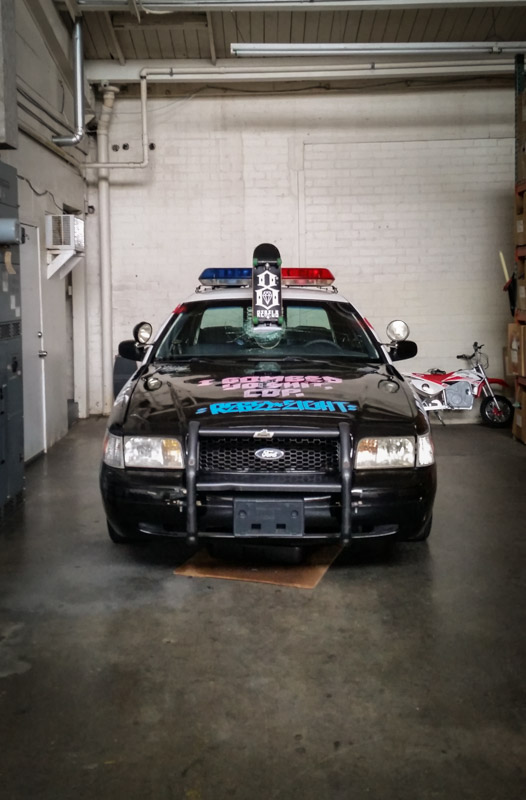 Remember comedy writer and Twitter personality Jenny Johnson?  The one with half a million followers and as obsessed with the Serial podcast as I was?  Turns out she had another closet infatuation, and that’s with sneakers.  So for our upcoming web series about sneakerheads, we cornered Jenny in her Hollywood home as she took us through her vast collection.  We begin – as we so often do – with cement IVs (both my, and Jenny’s, favorites). 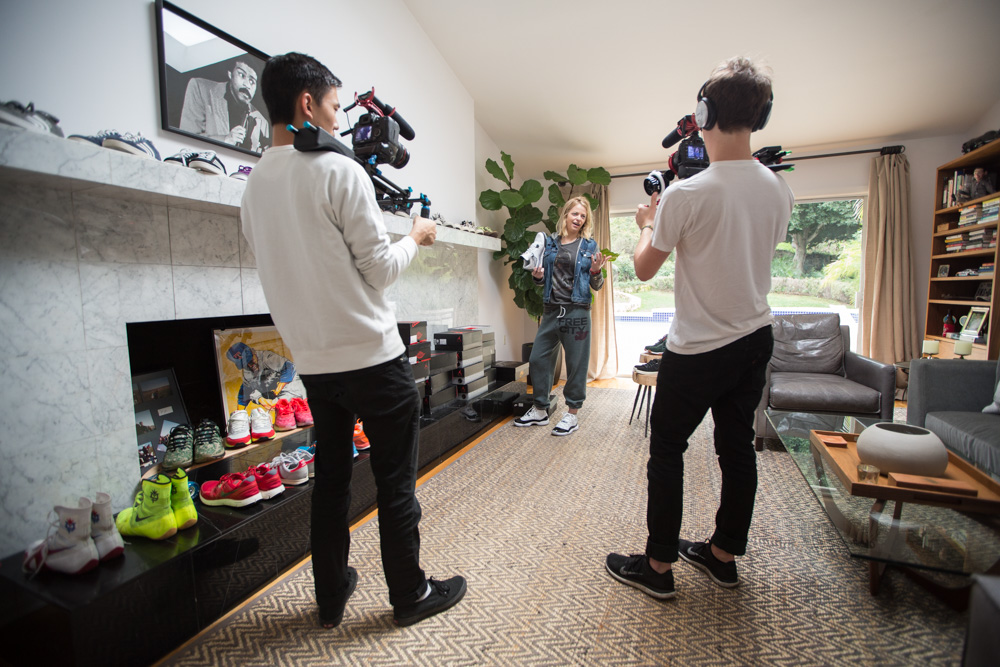 Sneaker collecting is such an interesting subculture because you can’t pigeonhole the demographic.  It’s so personal – and it’s so strangely emotional – that the people who fall into it run the gamut from Filipino B-boys to blue-eyed, blondes from Texas. 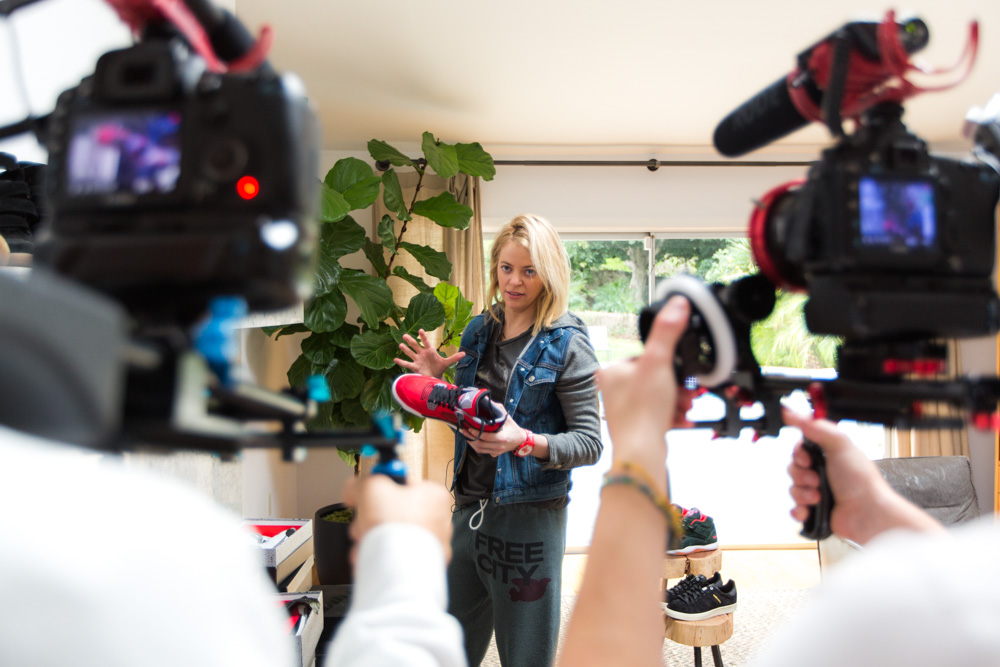 Rushed over to the Westside to make my meeting at Snapchat. 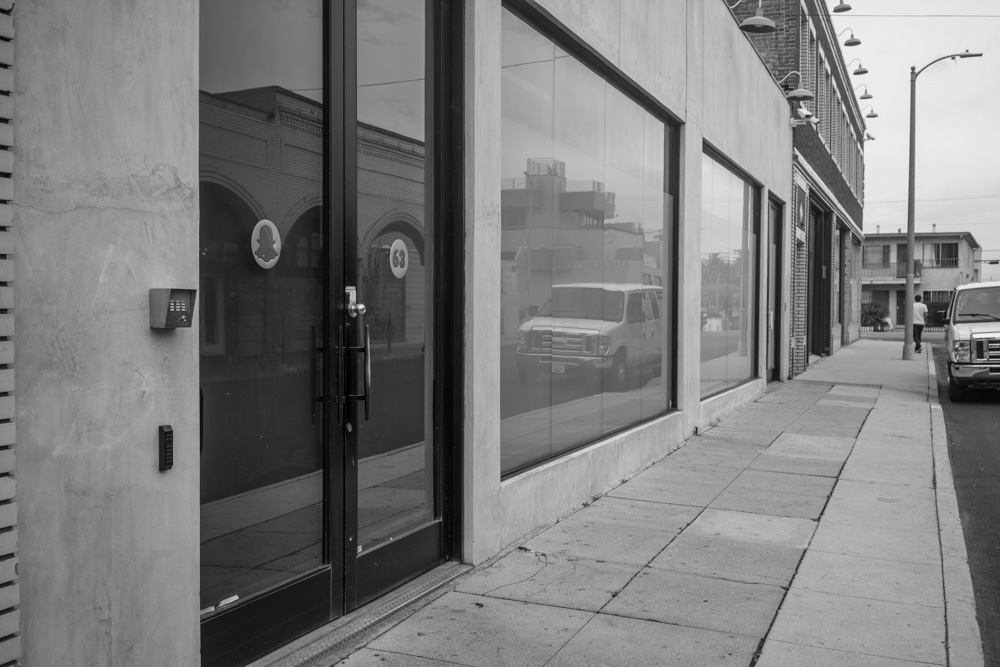 After I wrote this piece about the app, they invited me down to tour the offices, which couldn’t be in a more prime location.  Eff a Silicon Valley Google campus (or VERNON for that matter), Snapchat takes up an entire street – both sides – that spills out onto the Venice Beach boardwalk.  This particular building I walked into used to be Matthew McConaughey’s home. 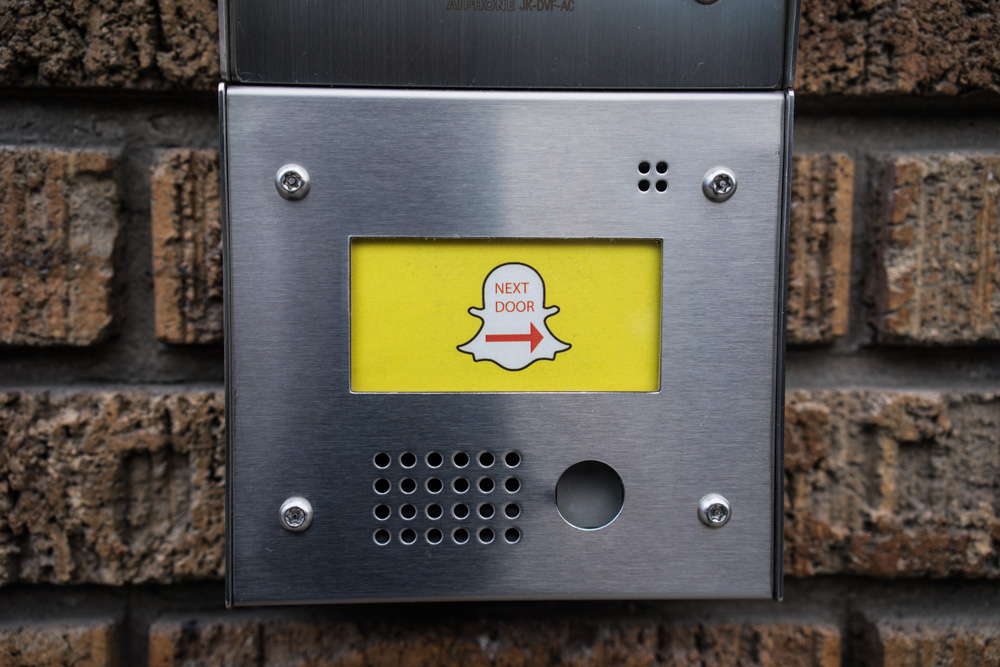 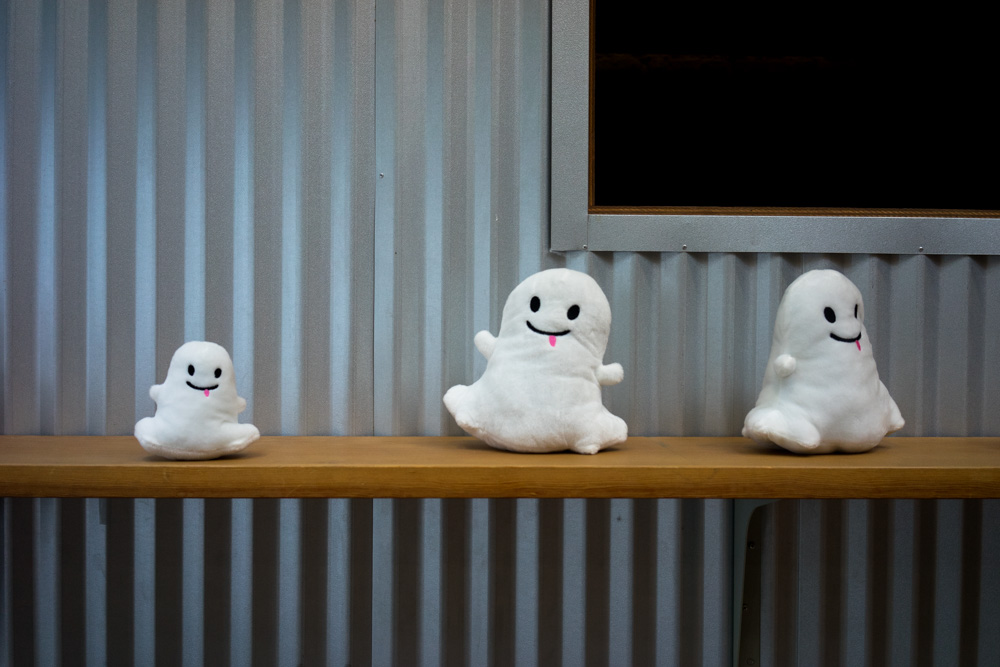 Had an enlightening conversation with Eric Toda, head of partnerships, about the state of digital and social media.  He was at Facebook during its ascent, and then Nike, and he swears he hasn’t seen anything like what’s happening at Snapchat right now.  As I wrote in my article, I’ve always perceived Snapchat as a texting service, but the other side of the coin is Snapchat as this media/news platform, which substantiates their new Discover page.

Got some tips and insight as to how to better utilize Snapchat, but learned that one of the best things about the app is that everyone uses it in so many unique and different ways.  And as I also touched upon, how empowering it is to choose what you want to view, as opposed to a “river of pollution.” 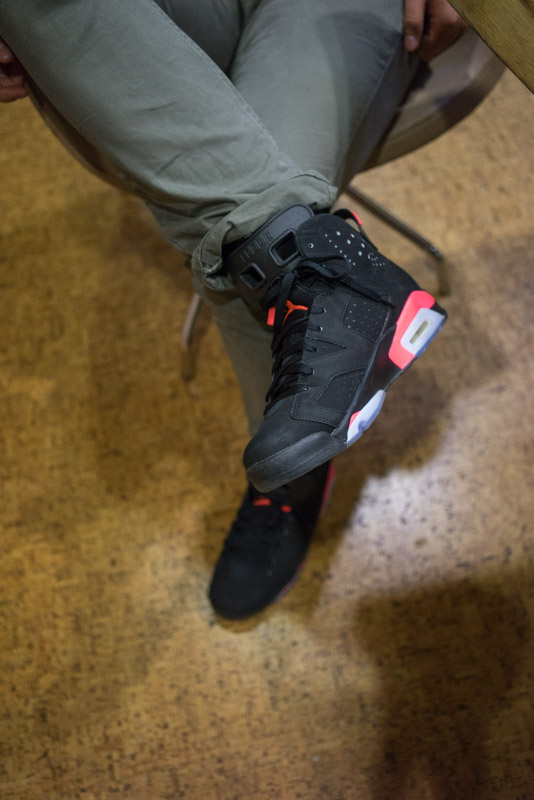 I left the meeting and collided straight into this glorious sunset.  We caught a few of these this week in LA – not to rub it in your face, East Coast.  Venice local Haden McKenna in the foreground. 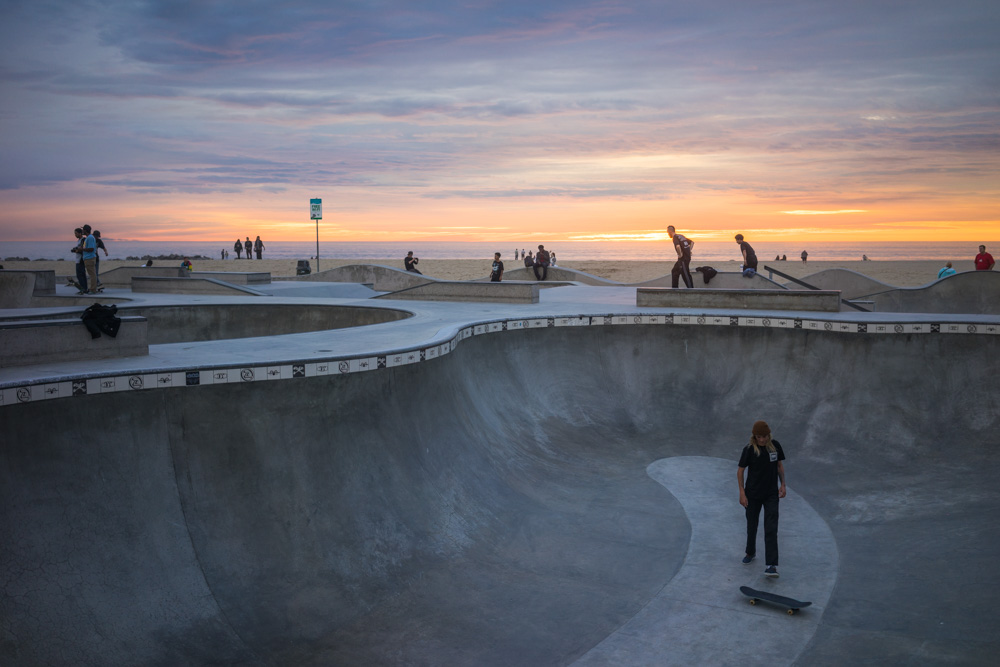 The weekend before, not sure if you heard or not, but my team Fight Back FC won the adidas tournament.  There was a lot of grumbling from the other teams, some heavy bitching and crybabying from sore losers, but everyone had the same recruiting rules, and if they had access to a better buncha guys (and girls) as I did, you know they woulda built their squads accordingly!  Somebody has to be best…  and the handsomest! (What a good looking team)

Anyways, the fact that I scored two goals goes to show how bad the other teams really were.  GOOOOOOOAL 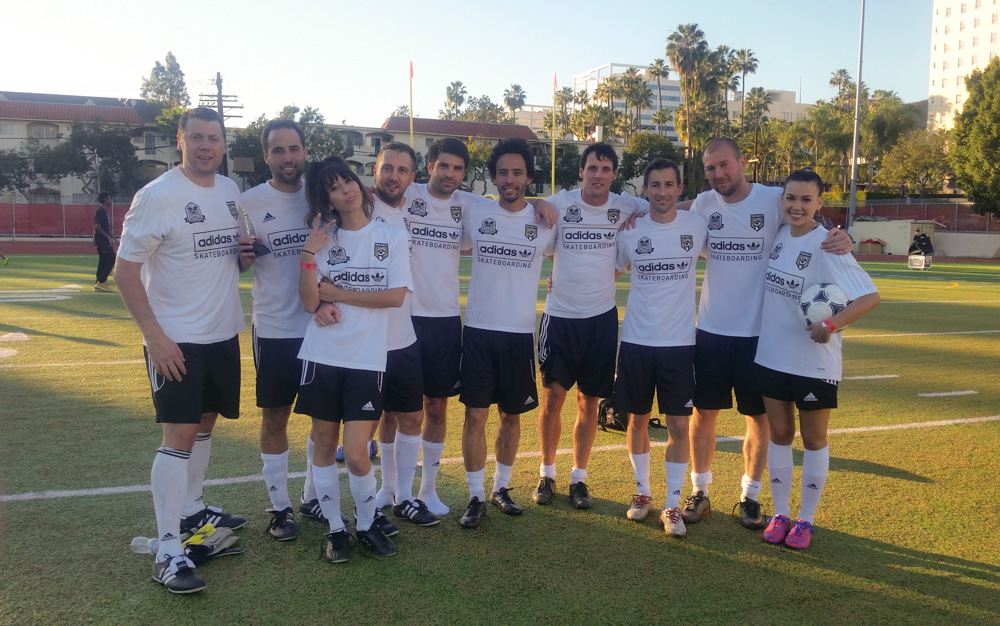 Russian artist Lora Zombie just stepped off her flight and was in LA for the first time, gearing up for her live painting event at The Hundreds Santa Monica.  One of the biggest turnouts we’ve had at BDWY with one of the best crowds. 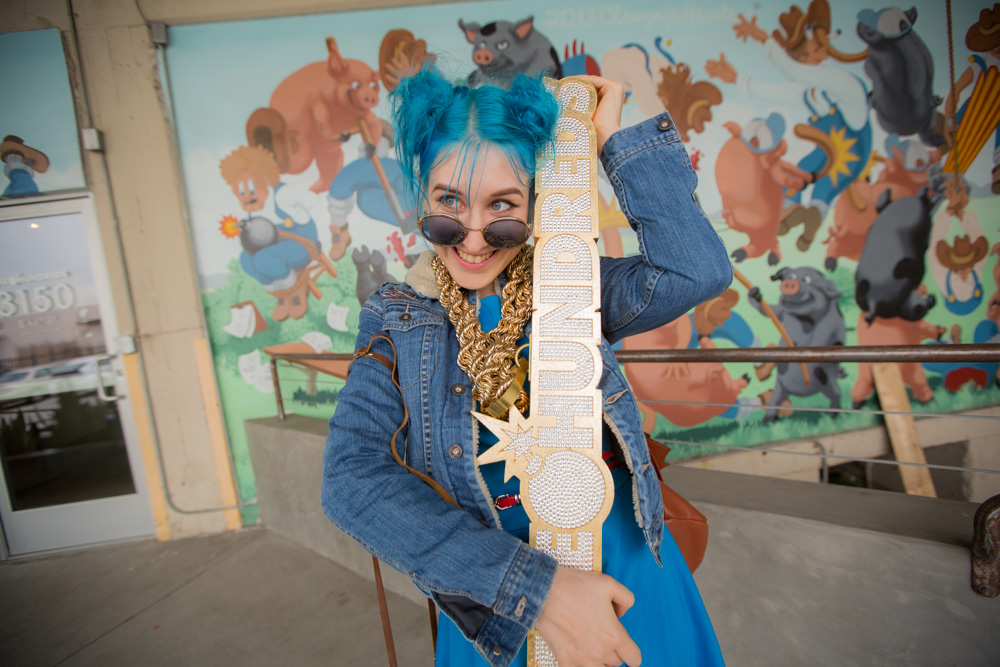 Welcome the newest member of The Hundreds’ family: Bentley. 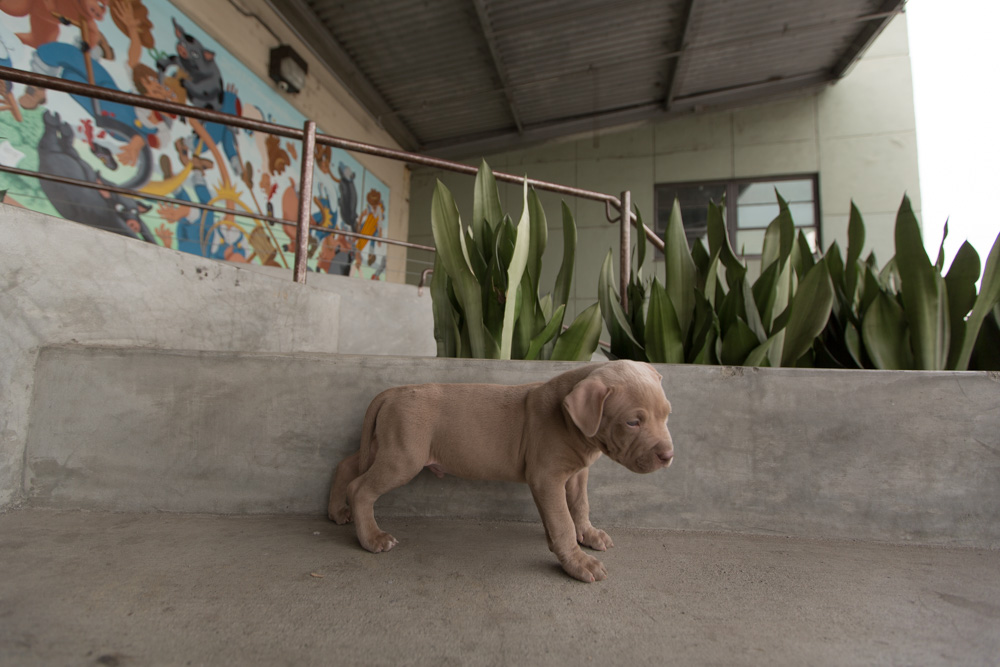 But you’re gonna have to go through Tide first. 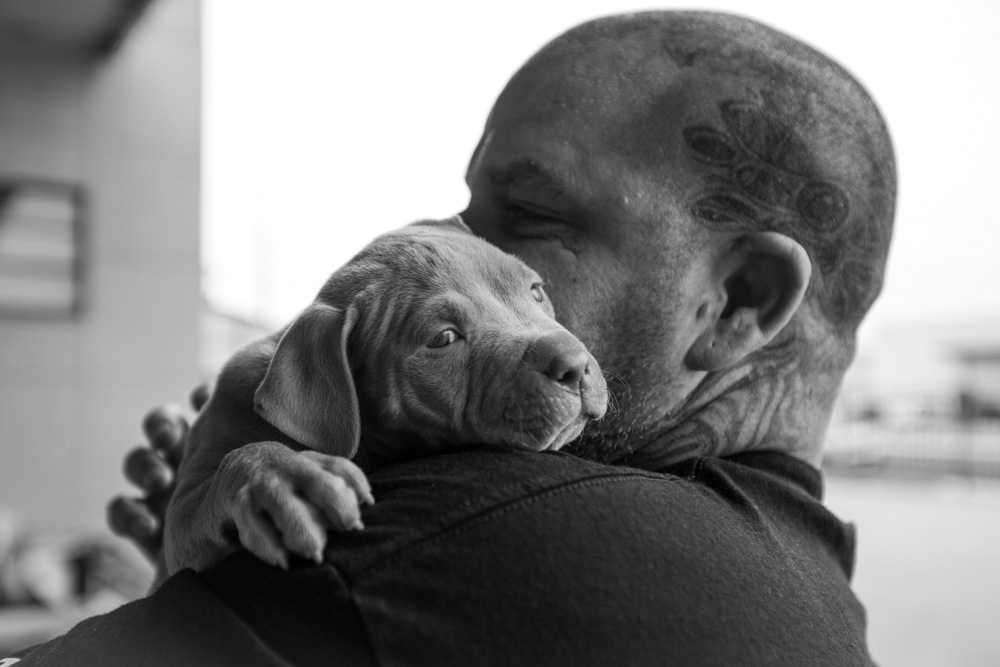 What a savage monster. 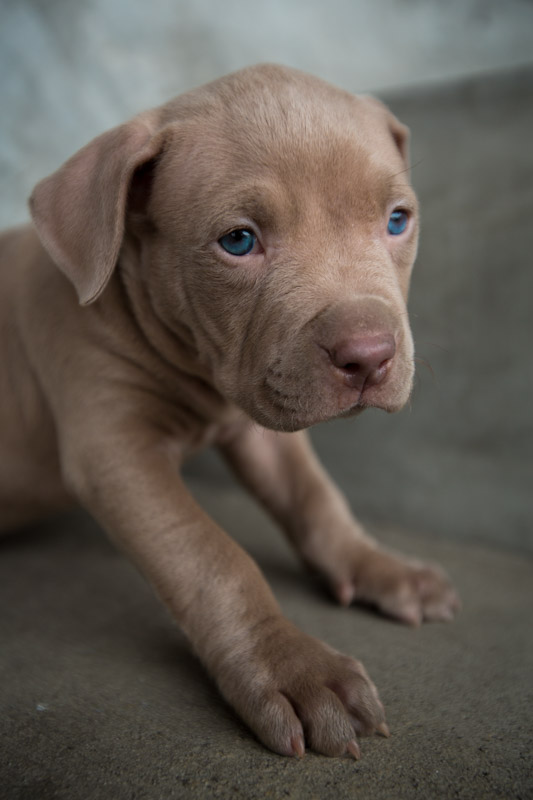 The other afternoon, Ben, Patrick, Alina, and myself were scheduled for an intensive discussion about our website; but I was getting pretty tired of the office so we ventured outside.  First things first, lunch at Yang Chow.  And then to the famous Chinatown plaza to hold our meeting.

This conference room was occupied. 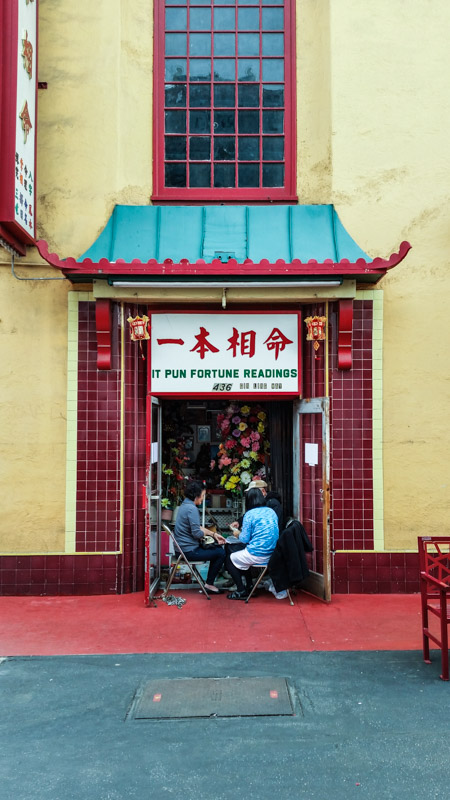 This workspace didn’t have enough chairs. 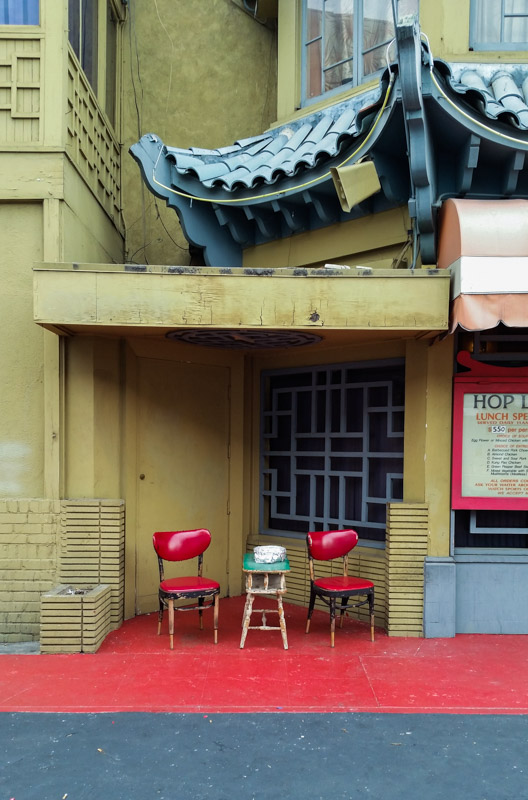 This one fit just right.  The world is my office. 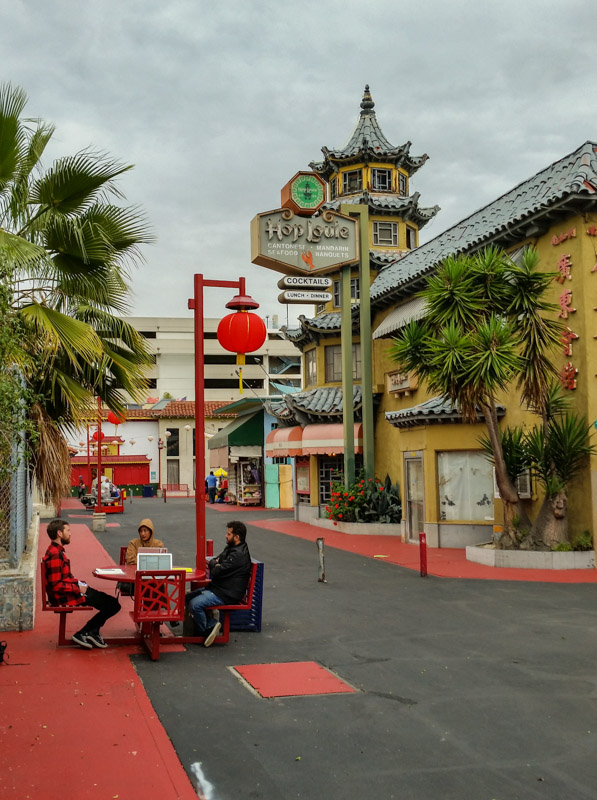