26-year old MC Remy Banks is currently blazing a trail for new, upcoming New York acts with his World’s Fair crew—shining a light on a region that has been barren of new, exciting acts for a very long time. Stylistically, he’s both a blast from the past and a breath of fresh air musically, and it definitely helps that his ear for production isn’t typecast into any traditional East Coast sound, as he explains: “I’m open to everything. I never try to limit myself.” Remy is currently tearing through the country on the 3001: A Laced Odyssey tour with Flatbush Zombies, but before he takes a detour to rip the stage at our SPITSET show (RSVP here) this Tuesday, we sat down with Remy to get his top five favorite producers in the game right now. His answers cover a variety of producers who have a plethora of different sounds at their disposal, but most importantly, people who he can sit down in the studio and build with. 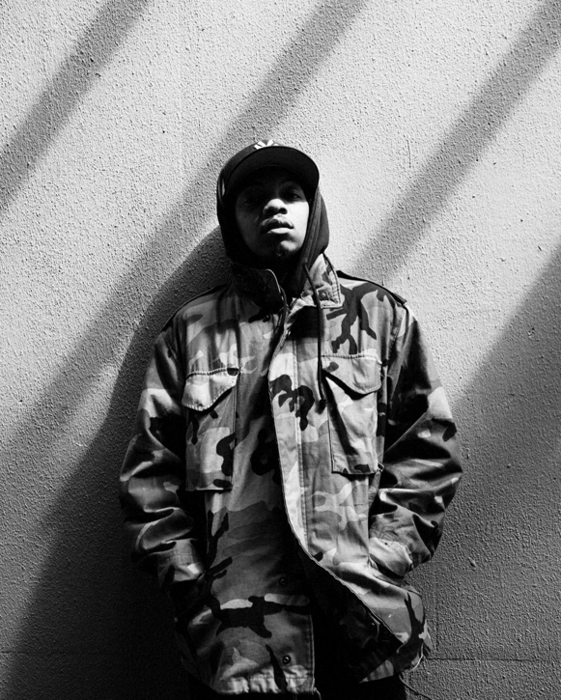 “I’m not even being biased because he’s my in-house producer, but this kid is on a whole other wavelength that I don’t think other people can reach. He’s in his own world. It’s something about his rhythm and his drums that are so clean that they translate to whatever story I’m trying to tell. I’ve known Black since 2011, when we met via email. Skywlkr, who is Danny Brown’s in-house producer, hit me up with a beat tape that he and Black did. I was like “who is that other dude on the tape?” And he linked us and Black sent me a email with like four beats on it. [I recorded to] three of those four that same night. That’s how crazy they were. Off the rip.”

“He’s a producer from Jersey who spent time in Philly and now lives in LA. [He produced “Momma”] from Kendrick Lamar’s To Pimp a Butterfly. You can’t even say he’s jazzy, or pigeonhole him. He can do whatever. His shit is just so soulful though, and you know who it is once you hear it off rip. The way he flips shit, his drum patterns, is just crazy. My favorite production from him is a song that he did with Anderson Paak for their group NxWorries. They would perform it on tour when I was on tour with them last year, but it isn’t out yet. When the world hears it, they’re gonna go crazy.”

“He’s on another level. He’s a music head, a vinyl head. You go to his crib, he has walls and shelves of vinyl all over the place. The way he chops his shit is very different, it’s very him. He put a lot of niggas on, he made niggas start searching for a certain sounds from being in the room with him—that’s how impactful he is. I’ve worked with him, but we’ve never put out our records. I do have something from him on this new body of work I have coming soon. You’ll hear it soon.”

“That’s my dude. Every time I’m in LA, I end up linking with him. He always links with me, and it always revolves around a movie. Like he’ll be like ‘I been watching something, and I made some joints for you.’ And there’s always a handful out of that batch that I fuck with. When he produced “Rem.” from my project Higher, he was watching And1 mixtapes in the studio and made a whole batch from [that inspiration].

I love working in the studio with producers because things could change. They may have certain skeletons and I can build off of that. We build off one another. I work with Black like that, and I work with Left like this as well. A lot of producers that I have been working with for years have that relationship with me. I don’t want to give too much away, but [Left] may be on my new project.”

“Alchemist is a legend, but he also gives the youth the opportunity to get our shine on by having an Alchemist-produced record. He can hear things that we don’t know, and help us develop a sound around that. My favorite production from him is probably “The Realest” or “Keep It Thoro.”

I recently met Sam [Baker AKA Samiyam] at Alchemist’s house, and he sent me some beats and shit. When I was in LA last, he came through and we started working. He’s a funny motherfucker, too.”