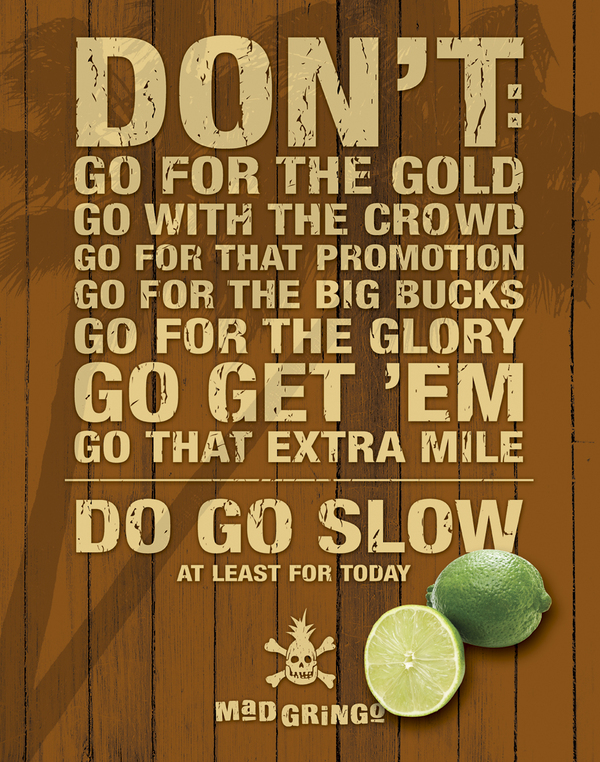 How did you hear about Twitter and why did you decide to give it a shot?

I first read about Twitter on an industry blog in early 2007. I figured I’d check into it and see if it was something I could recommend to my clients. I signed up for an account not thinking I’d post very often. I happened to have a picture of David Ogilvy, one of my advertising heroes, on my desktop. I used that as my avatar. It’s the same one I use today.

I’m not one of these people who ever thought Twitter was worthless or stupid. Even in 2007, I knew it was the perfect medium for Justin Bieber. Pretty visionary considering he was a toddler at the time.

What did you think about the Twitter information network/social network initially, and has that changed over time?

I was instantly taken by how simple it is. Genius, really. Twitter is actually a lot sleeker now, but a little more complex.

I was also taken by the instant feedback. That’s something I’ve never really had working in advertising my entire career. I mean, I can stand by a billboard I wrote and try to see if it makes the driver of a car smile as she passes by. But that would be sad. And, trust me, the thrill wears off after ten hours of standing there. 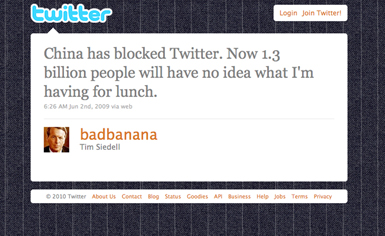 Has your Twitter success had any influence on the rest of your life/career?

First off, it’s made me a better writer. As an advertising copywriter, I’ve always written in short bursts. But I’m writing to sell something. On Twitter, I have complete freedom to go wherever my brain takes me. So even though I’m limited to 140 characters, I find it quite liberating. Creatively fulfilling.

Then there are the other opportunities. Yes, there will be a book someday. I’ve also made a lot of interesting contacts along the way. I get emails of support out of the blue from people I’ve always admired and looked up to in the world of entertainment. That’s been great. There are some interesting developments in the works. Some possible collaborations.

On the down side, I have a tough time remembering the names of all my new mistresses. 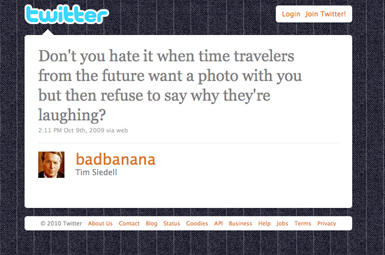 Do you ever get Twitter anxiety and wonder what one should say in front of 350,000 (and counting) followers? Is there pressure to be funny?

If I have Twitter anxiety it’s indistinguishable from my normal, everyday anxiety. I’d say it’s at least ten layers of anxiety down on my personal hierarchy of anxiety.

You have more followers than the Dalai Lama, have you considered starting a cult? L. Ron Hubbard said that’s where the money’s at…

First off, the Dalai Lama isn’t very funny on Twitter. I’d say he really needs to step up his game if he wants a sitcom development deal. Last I saw, he was mostly just tweeting his latest Doodle Jump scores.

L. Ron Hubbard was also a writer from Nebraska. Maybe you’re onto something there.

Since you’re one of the most acclaimed Twitter authors (Tweeters? Twitterers?) around, do you care to mention any others who you enjoy following?

What were you doing before you co-founded Fuse in 2000?

Doing the exact same thing, just for other agencies. As a copywriter and then creative director, I worked on all kinds of accounts; banks, hospitals, and phone companies. I did work for national brands such as General Electric and Stanley.

Now I also get to co-pay the rent.

Did you come up with the incredible splash page concepts for the Fuse Industries website? Aside from being absolutely fascinating, they tie lessons from science and invention into brand communication incredibly well.

Thanks. Yes, I did. I came up with the various concepts and wrote all the copy. 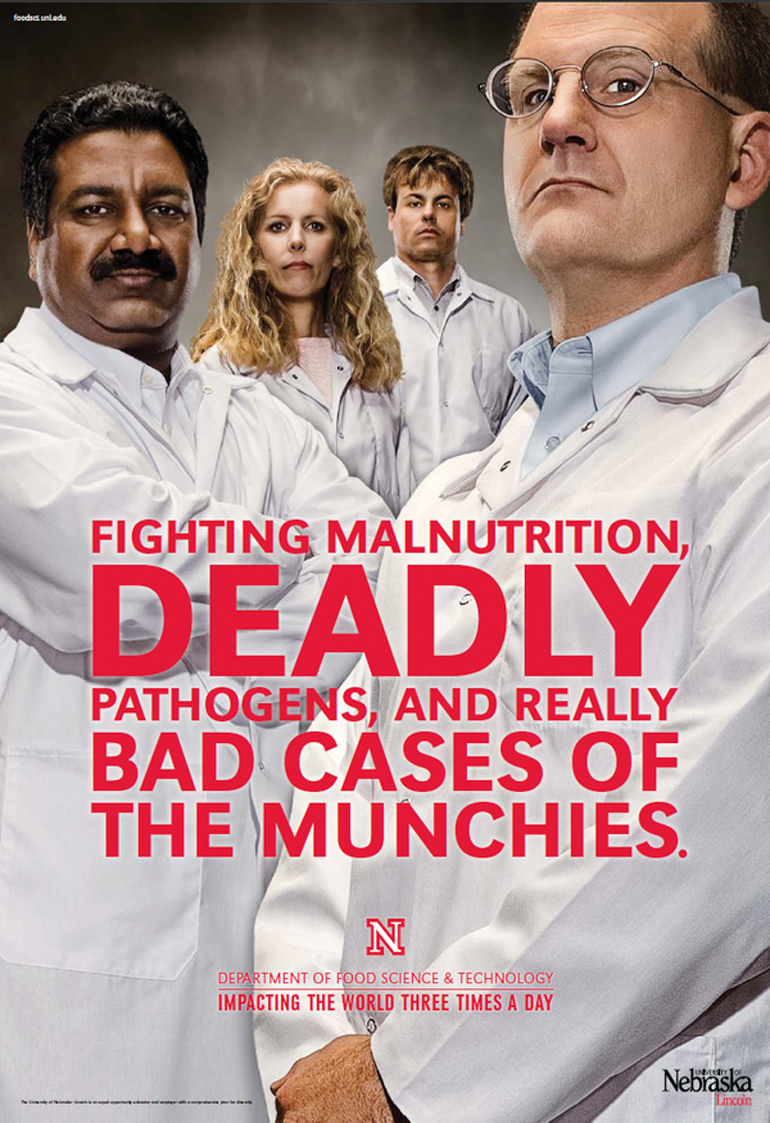 The name of your blog refers to the fact that you can take two “bad” things and make something delicious with them. Do you have any examples of that phenomenon from your own work?

Really, all the time. An idea is simply a new combination of old or existing elements. I encourage young creatives to mind map. To sketch words or images onto paper. To put ideas up on whiteboards. To tape concepts onto the wall. Whatever process feels good for them. I use a Moleskine because I’m a pretentious prick and I enjoy being a stereotype.

Then look for connections. Shake it all together and see what happens. The best creative departments can do this together as a group. It might take a fresh set of eyes to take one person’s cliched idea and combine it with another person’s half-thought-out idea to come up with something truly fresh and original.

How did it come about that you were asked to write for The Huffington Post?

Turns out some people over there already followed my Twitter account and had faith that I could write more than 140 characters at a time. I can, but it takes longer. 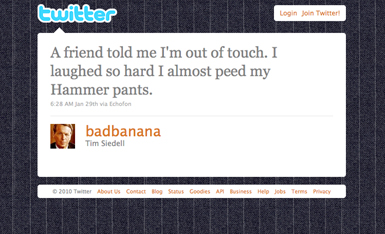 The Amerivisionarycan Party you reference in your first article has a mascot with four halves, which clearly makes it twice as good as any other political party. You could be the new Karl Rove. Do you think politicians are worried? Should they be? And where can I sign up?

People want something new. And technology can make politics new again. Obviously, a big part of the Amerivisionarycan Party movement is cloning. We propose a perpetual line of cloned George Washington’s as president and a dinosaur as vice president. All for obvious reasons.

Beltway insiders need to stop reading the Federalist Papers and need to watch the Jurassic Park movies again. Where is the imagination? The ingenuity? Spielberg was able to clone dinosaurs for, for goodness sake. As far as I know, that park is still sitting there empty. Yes, it failed as a theme park. But the technology is obviously still available. The labs are still there. All we need is the funding.

Are politicians worried? They should be. A dinosaur vice president is unpredictable.

I encourage anyone to read the article for more information about the party. If you want to join the movement, there’s a Facebook page. Someone I don’t know went to the trouble of setting it up. 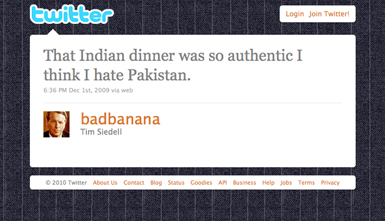 Do you actually have a bucket list, or is that just something you like to joke about?

I would never joke about something as serious as a bucket list. Nor my desire to win a Tony.

What exactly is the Nebraska state of mind?

Let’s see. Nebraska has given the world Marlon Brando as well as Chris Klein. Johnny Carson as well as Larry the Cable Guy. Harold Lloyd. Henry Fonda. Fred Astaire. Warren Buffett. Even Evan Williams, co-founder of Twitter. Out here, the horizons are wide open and flat as a pancake. Point yourself in any direction and go wherever you want. Or stay. We’re not a picky people.

What is your favorite kind of donut?

That’s easy. Any donut stolen from a meeting I don’t have to attend.

When will you be winning that Nobel Peace Prize for inventing time travel? And perhaps you’d like to share whether or not Dippin’ Dots truly are the Ice Cream of the Future, or if that’s just a good marketing slogan? It’s kind of hard to prove because the future never quite gets here…

Keep up with Tim by clicking on one or all of the links below.