Straight Outta Compton opened to a number one release nationwide in its opening weekend, and deserves its attention. It’s head-scratching to think that a few dudes out of the ghetto would forever change the landscape of rap and censorship in a country where upward mobility is as real as Tupac still being alive. Then again, it’s not that baffling. It’s the stuff biopics are made of—of course there’s a groundbreaking group of performers that overcome adversity like social ninjas on the strengths of their talent and tenacity. Which is exactly what happens in the flick. Sigh, yes, you’ve seen this movie before. 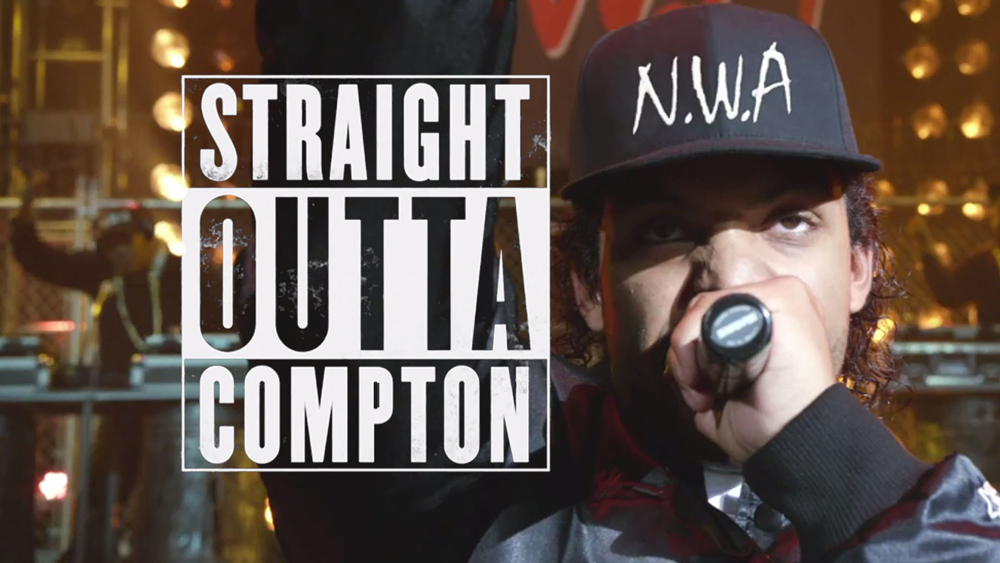 There’s a certain amount of empathetic-embarrassment response one must prepare for when going into Straight Outta Compton. It’s the same feeling as watching a dude on one of those talent shows botch the lyrics to a pop-song he should know. Your response is to squint your eyes and cringe, ducking for the cover of his dignity. There, through the television, you wish you could just dust his back off, pat him on the shoulder, and tell him it’ll be okay. But for the new N.W.A. biopic, you’d be dusting the back of a Raiders jacket, and patting residual Jheri curl activator (which is incredibly awesome!).

What’s different is this is Ray (2004) meets your bi-decadal hood movie du jour. When the movie opens, an insanely brave young man talks shit to a dope dealer and a flying title informs us the young man is Eric “Eazy-E” Wright. Moments later, a ceiling-mounted shot looks down on a youngster listening to tunes while sprawled on top of a comfy pile of records (the only way to lounge), and a title flies by his head, introducing the audience to Andre “Dr. Dre” Young. Thus, holding our hands through the exposition as biopics tend to do. Our heroes and villains get clearly defined, because otherwise, there’d be no way to figure it out. There are also racist cops, wild parties, corrupt music execs, and gangs (…gangs everywhere).

“ONE OF ITS DRAMATIC FAILURES IS THAT IT CANNOT EXTRAPOLATE ITSELF FROM THE INHERENT CORNINESS VIA ADVERSARY-VIS-A-RACIST-COP.”

Did I mention racist cops? One of its dramatic failures is that it cannot extrapolate itself from the inherent corniness via adversary-vis-a-racist-cop. There are at least two dramatic run-ins between the protagonists and racist law-enforcement within the movie’s first forty-minutes. The gravitas is heightened, the camera angles tighten, and I was unable to stop myself from picturing Keenan Ivory Wayans interjecting with “messaaagggeee!”

It’s as if Straight Outta Compton exists in a vacuum where not enough hood movies have been made for there to have been parodies of hood movies already calling out the tired tropes of said genre (1996’s Don’t Be a Menace to South Central While Drinking Your Juice in the Hood). See: The Bernie Mac I hate your gums ‘cause they’re black scene.

Wholly, it’s dressed-up neatly in the cliche biopic uniform in nearly every way that renders the drama dull, making its nearly 3-hour run time a smidge abhorrent. We learn of how Ice Cube wrote most of the lyrics of their hits, how Dre made the beats, how Eazy-E ran the business, charismatically declaring himself “the Barry Gordy of this shit,” how the white media wanted to silence their message.

“It runs along a string of cherry-picked hallmark events, that are so obviously bound to the appeasement of its producers (Ice Cube, Dr. Dre, Eazy-E’s widow) it at times stoops to the level of a VH1 miniseries. It’s as fluffy and glossy as the the actor chosen to play Suge Knight—R. Marcos Taylor. This dude is so unthreatening on-screen that I was wondering about his Pinterest account. I suppose there’s no appropriate actor to fill the shoes of a real life supervillain like Knight, but this guy certainly was not it. 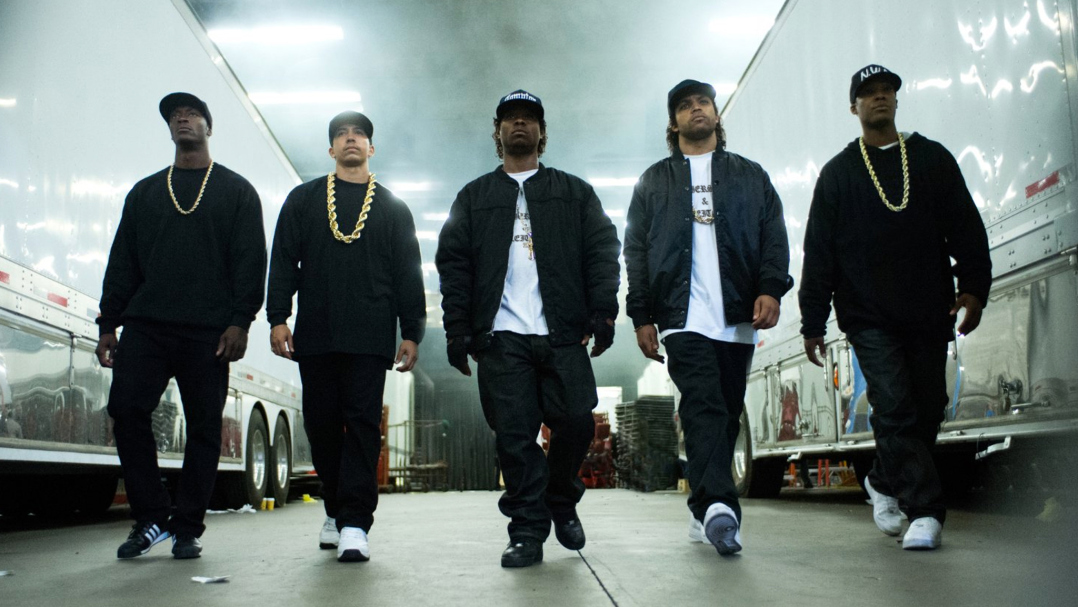 However, the other casting choices are what save this movie: Oscar nominee Paul Giamatti shows up as infamous band manager, Jerry Heller, offering that uncouth and unkempt weight to a role that required as much. Newcomer Corey Hawkins believably passes as Dr. Dre, while O’Shea Jackson Jr. plays his own father, Ice Cube. Not only does dude look like a dead ringer for Cube, but he has the mannerisms, voice, and furrowed brow of pops. But the standout in casting is Jason Mitchell as Eazy-E. Mitchell probably racks up the most screentime for any single member of the crew, and takes part in the movie’s most dramatic sequences. There’s a sincere ferocity behind Mitchell’s gaze, and something magnetic about his screen time. He nails Eazy-E’s vocal pitch and looks about as bad as Wright did in a Jheri curl. So—perfect. When the film reaches its dramatic apex, even my cynicism is won, if just temporarily.

Straight Outta Compton is not a cinematic wonder, nor groundbreaking, nor award-worthy. There’s nothing stand-out about the composition of the narrative, and hardly anything grounding about the set-pieces: rag-tag studios, tour buses, mansion parties. They come off like the cheap veneers they are—glossy, and low-fat. Its exposition links through loose moments in time via record-spinning montages, with the flying inner-workings of LPs being pressed and laminated. Its drama punctuated by police stand-downs, and Dr. Dre doing angry driving (followed by a police stand-down). Its story arc so wrapped in the preservation of its surviving heroes’ legacies, that you could choke on their bank accounts. Yet, after its initial introduction of characters and your tumble into the sophomoric melodrama, watching the story of five black males who caused an everlasting chasm in pop-culture is satisfyingly worth it. 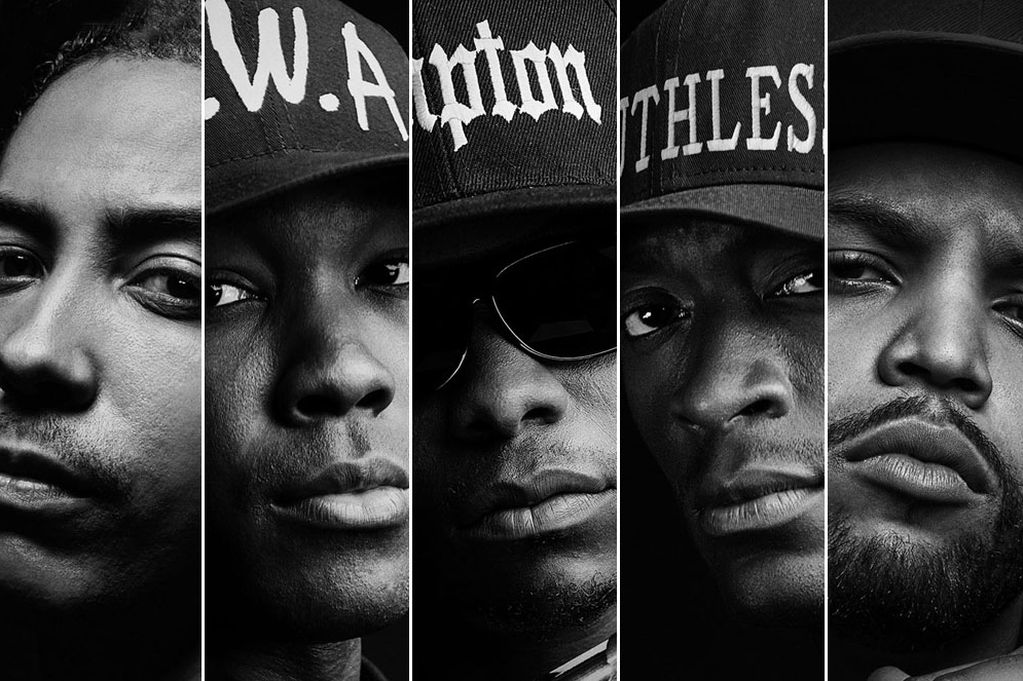 So They’re Making a WorldStarHipHop movie…

Jensen Karp
Last week, news broke in Hollywood that Paramount Pictures had purchased an idea for a movie from one of the most unlikely sources on the Internet. It seems the brain trust behind the globally succ...