How Hollywood's Hottest New Writing Team Hasn't Even Met Yet

This is no news to you, but the Internet is a crazy place. For example, here’s a personal website owned by a man who once appeared on Saturday Night Live in the 1970s, and 30 years later started writing letters to Lorne Michaels everyday, for almost a decade, hoping to become a regular cast member. And here’s another site that just houses a spinning taco, running on an endless loop. And this Twitter account, marked by only a photo of a woman in a suit working on a laptop, has tweeted the same sentence, “I want to be a business woman,” every single day for over 3 years. It’s quite a jungle out there, but every once in a while, the Internet does something magical and you just have to sort of sit back and say, “You may be a medium where you can easily buy human skulls without leaving your house, but for now, I’m gonna let that pass because this here is awesome.” And that’s where Stefan and Rob come in.

Stefan Heck and Rob Whisman have never met in real life. Both 26 years old, Heck lives in Vancouver and Whisman resides in Kentucky, yet they recently became a buzzworthy writing team in comedy. Their hilarious pilot script for an animated TV show called “Goons,” which follows 3 idiotic low level work-for-hire bad guys, is currently sitting atop an Amazon Studios contest to actually get made. And that was the FIRST thing they ever wrote together. Their collaboration has gotten the attention of Hollywood heavyweights like Rob Delaney and Ike Barinholtz, who both tweeted about it, but Stefan and Rob are yet to even shake hands. I got to talk with the duo as they wait for the Amazon results and decide what’s next to come from this unconventional, but promising, partnership.

Jensen: How did you guys start talking online?
Rob: Well, I was on Craigslist looking for someone to pee on me.

Stefan: And I was on Craigslist looking for someone to pee on. Serendipity. Rob and I have followed each other on Twitter for like 3 years or so, and we’ve wanted to write something for a while, so Rob approached me this past summer with a great idea for a script.

J: But you two have never met in person.
S: Nope. I live in Vancouver and Rob lives in Kentucky.

S: I’ve read about Kentucky and could probably point it out on a map after 3 or 4 tries.

J: So, how did you guys go through the writing process 2,577 miles away from each other? I looked that up.
S: We basically wrote it entirely over Skype. We had an idea of the outline, but essentially we just went back and forth for like an entire weekend and wrote the script page by page. My Internet sucks ass too, so that didn’t help.

R: It was fairly easy and quite fun. I think our comedic sensibilities work well off each other.

S: Yeah, Rob is a hilarious dude and we definitely share a sense of humor. 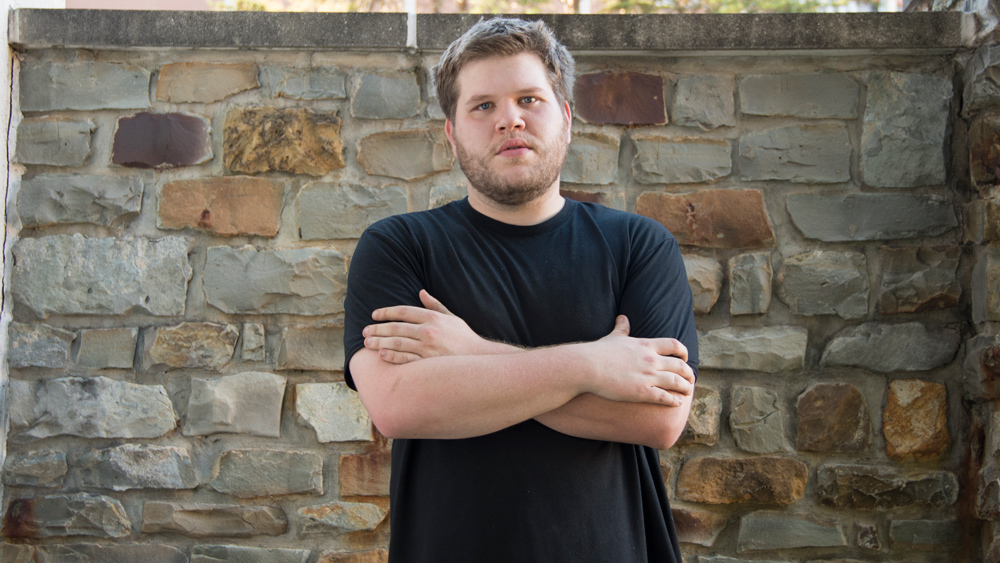 J: Do you remember what tweet made you think, “I can write with this dude.”
S: For me, it was when Rob threatened to fuck somebody’s gun and then that guy tried to doxx and kill him. That ruled. And his vines. His vines were great and he should make more of them.

J: Where did the idea for “Goons” come from?
R: I was having my semi-weekly Die Hard viewing and I thought, “Man, that guy McClane just threw from a window... that’s somebody’s son.” I wondered when, if ever, will that German man be humanized.

S: I mean, it’s a comedy, so we’re not, like, delving deep into their psyches. It’s more like, what sort of conversations do these guys have while the hero is moving around the building killing people.

R: Remember that guy Robocop shot in the dick? He had breakfast that morning. He votes. 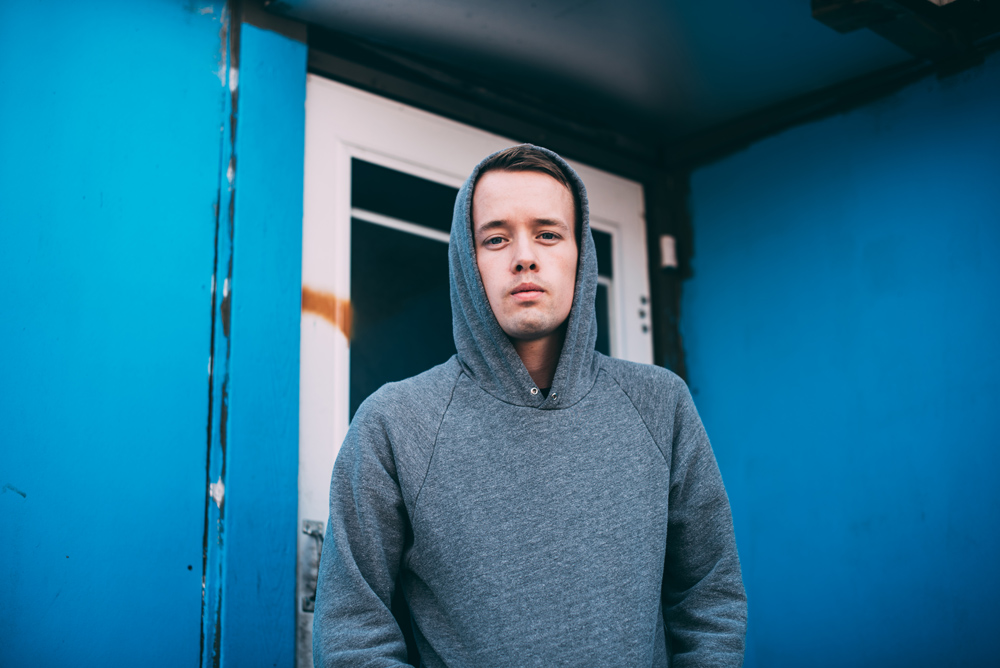 J: Have either of you ever had an “in real life” writing partner before?
S: I’ve written a few little sketches with people in real life, but nothing like this where we have to develop this entire world and all these characters.

R: I haven’t. This small Kentucky town isn’t really the breeding ground for comedy writers you’d think it would be.

S: Kim Davis is hilarious though.

J: I guess what I’m getting at is do you think writing together IRL would be easier than over the Internet? Or vice versa?
S: I would love to write stuff with Rob in real life, and hopefully we will soon. There’s only so much you can do with a crappy Internet connection and a laptop webcam. I want to be able to map out character arcs, season arcs, and episode ideas. It’s tough to do that over Skype.

R: It’d be easier in person. It would be harder for Stefan though because I typically smell like a grease fire.

J: Was seeing praise from Rob Delany and Ike Barinholtz surprising?
R: Ike loves us, so we knew he’d have our backs. Rob Delaney sharing it with over a million people though was mind-blowing. BJ Novak was the first person we sent it to.

S: Then he sent it to Ike and David Stassen.

J: Wait, how do you know these people?
S: The same way I know everyone—through Twitter. I can’t imagine trying to do this even just 10 years ago.

R: Yeah, 10 years ago we’d have to have gotten off a bus in LA and said, “I’m gonna be in pictures” or whatever. 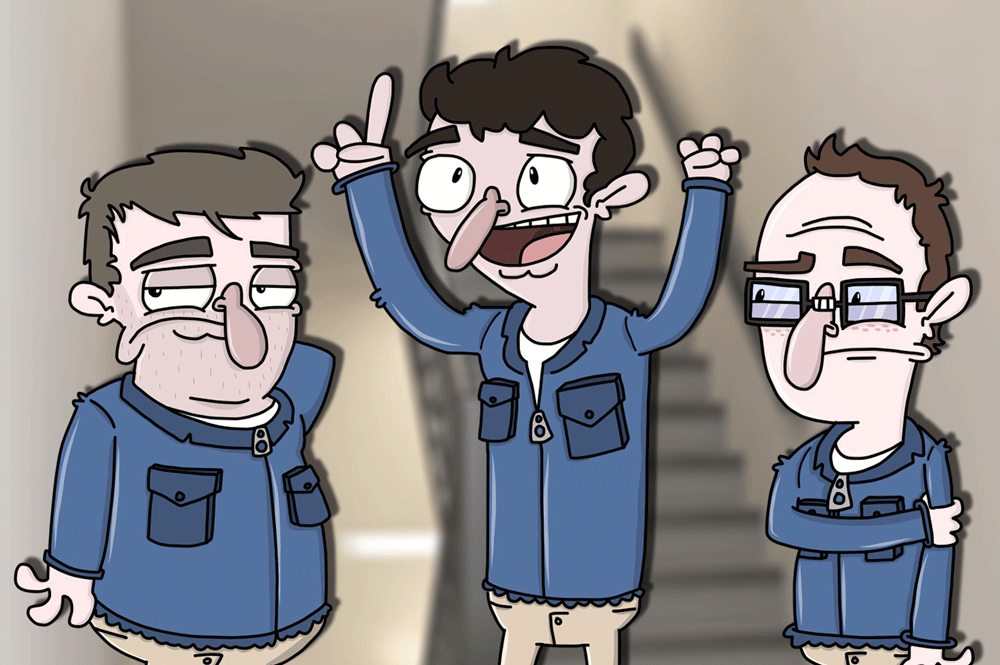 J: Since it was the first thing you had ever written together, did you feel like it was funny or that these people might react positively like they did, while you were writing it?
R: Our writing process is pretty much just both of us laughing nonstop and then taking breathers to write something down.

S: We were really proud of it once we finished. Our goal was something like three solid laughs per page, and I think we pulled that off. And my twitter followers react to when I ruin Fantasy Football drafts, so I figured they’d react positively if I wrote something a bit more... advanced.

J: So what’s going on with the Amazon competition right now? Have they reached out to you? What’s next?
S: We have not heard directly from Amazon, but we’ve heard from people who are in contact with people at Amazon, so I assume that counts for something. We’re working on a bunch of other scripts/projects while we wait to hear back.

R: We’re the #1 rated project on Amazon Studios by like a mile.

S: I think we have to wait until October 23rd at the earliest.

J: And then you’ll meet in real life?
S: That would be cool. Rob should come up to Vancouver. I... uh... I’ve already been to Kentucky before. Yeah.

R: I’m just waiting to confirm Stefan is really who he says he is. I’ve been burned before. Jensen Karp
Jensen catches up with alt-comedy's renaissance man Scott Aukerman – host of Comedy Bang! Bang! & producer/co-creator of Between Two Ferns – to get the scoop behind the iconic Obama episode, an... Jensen Karp
While mourning the passing of two legends – Joan Rivers & Robin Williams – Jensen realized something troubling: He had never seen Don Rickles perform live. This is his essay about heroes and mo...
HIDE COMMENTS