It was my last night in a city that changed my life.

During the two weeks of September I’d spent in Tokyo, I met a roster of unforgettable people that redefined my perspective of what connects us as people—how we coexist within the strange and exciting worlds we’re unfamiliar with. From dedicated fans traveling across the country, young rebels gifting me LSD, new friends connected to me through dead homies or girls with a broken arm from a show weeks earlier; there was an explosion of fascinating people in attendance to create a one of a kind community at the latest SPITSET in Shibuya.

A refreshing climate of light rain amongst a perfect temperature was the motif of that night, and it allowed the crowd to loiter outside the venue while drinking beers from the corner market. We took over the entire block with fans representing every tier of the event—with every act of the bill bringing out a different kind of hardcore kid. The limited SPITSET x TRAPPED UNDER ICE t-shirt was sported on many of those lucky enough to have arrived early. We flooded the block after sets and when the next performance began, folks rushed in the 250 person venue to be apart of the mayhem. 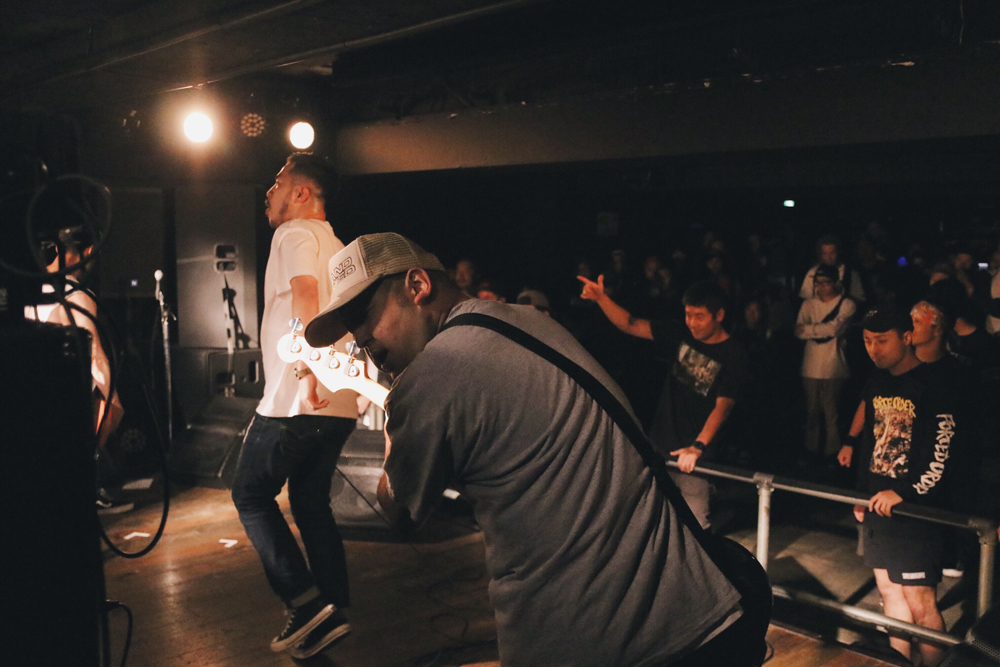 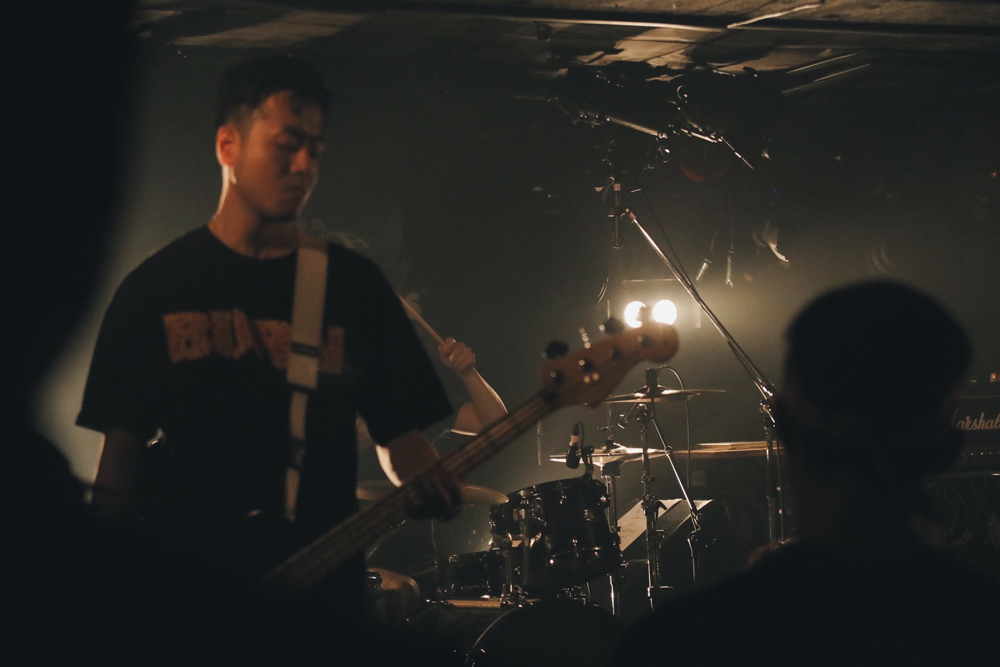 Every set was active with front men of the bands demanding active participation from the crowd. Yang, the lead singer of FIGHT IT OUT speared mic stands into the back of the audience. Franz of TURNSTILE pitted and stomped to the opening sets of DOMINATE, OTUS & STAND UNITED. Senta of NUMB received undeniable love and hit the stage harder than front men half his age. Heads were bleeding from dives hitting the low ceilings. A plethora of fans sported TRAPPED UNDER ICE merch and separated seas of people with their aggression. 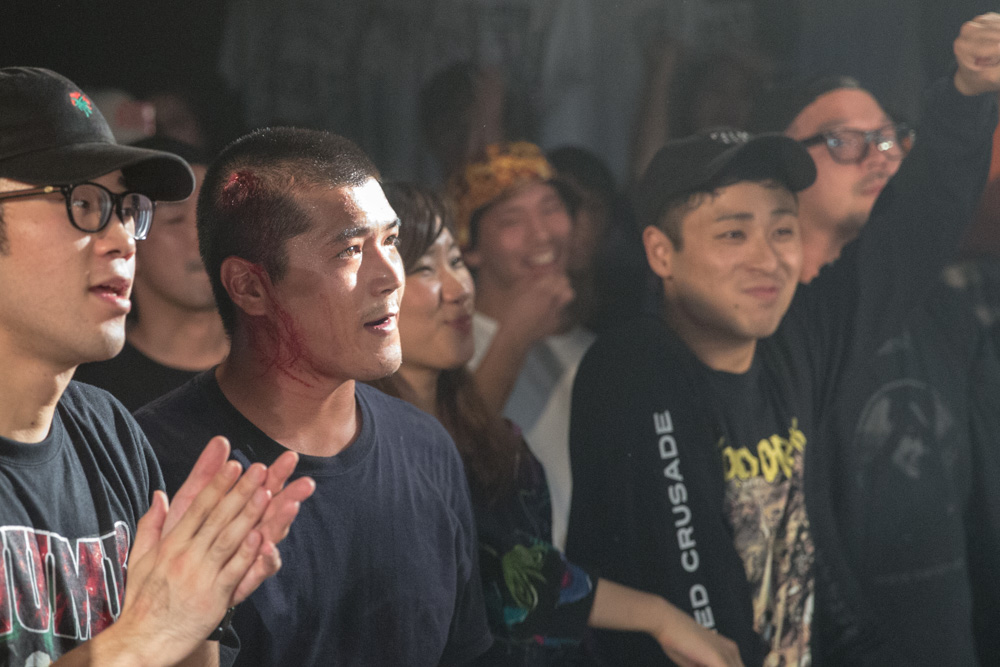 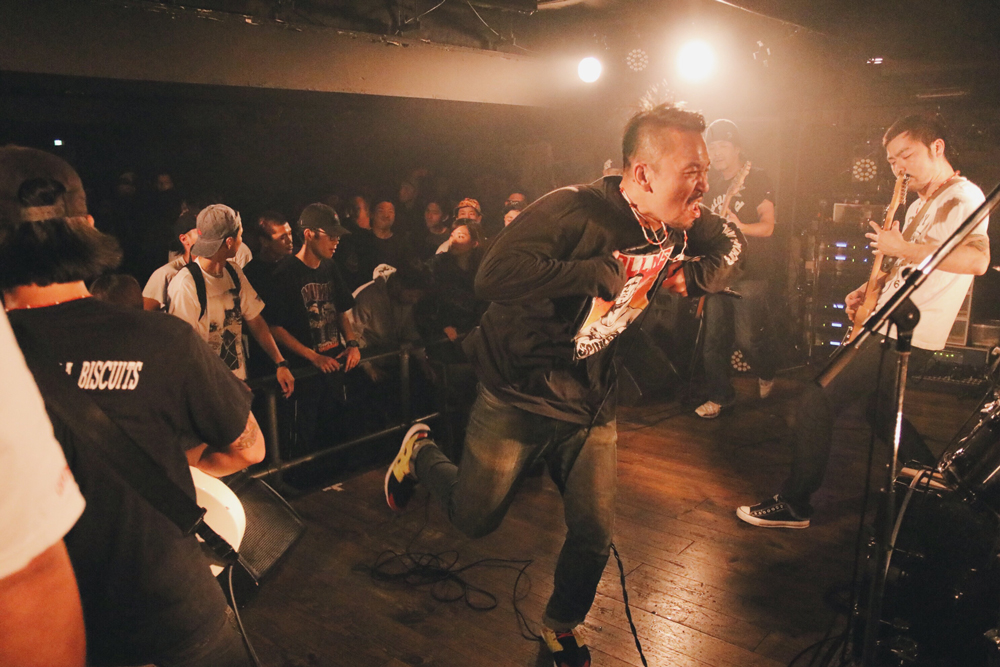 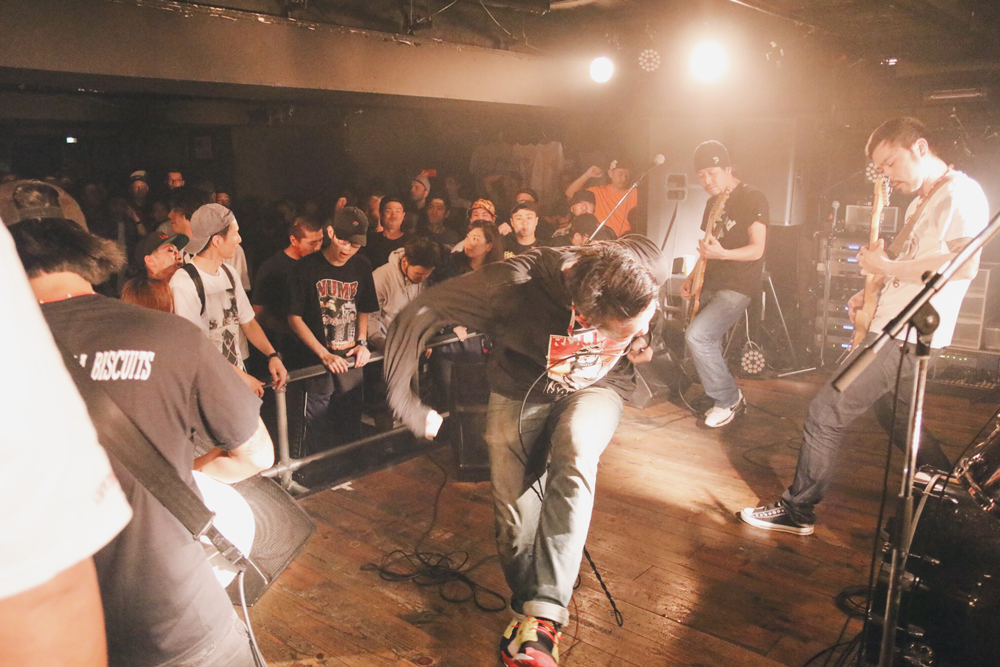 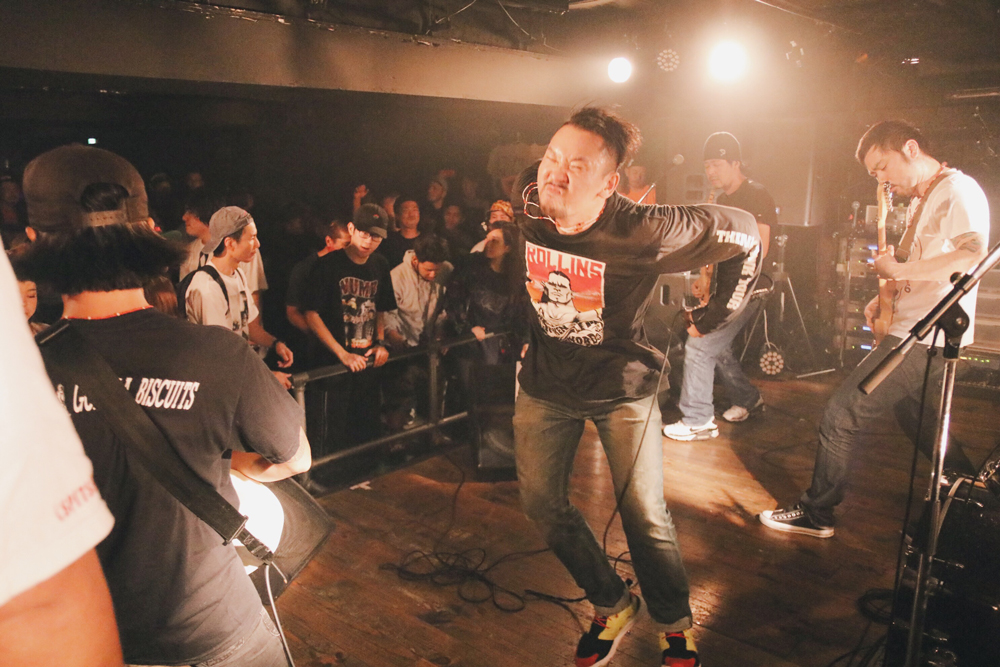 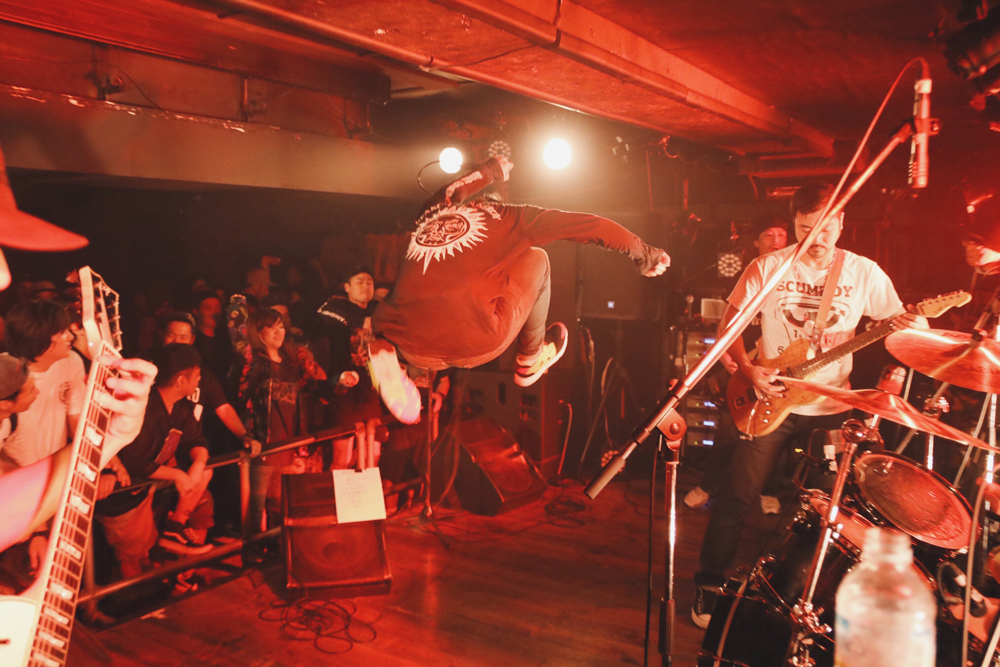 After muscling my duty of watching and participating in the pit of every single set, I hit the green room moments before it was my time. As soon as my gear was plugged in I hit the venue’s booming sound system with a curveball and blasted “Blow the Whistle” into “Still Brazy” into “Garcia Vegas” while the transitional visual screen blocking the stage projected old punk shows. I wanted to flip everyone’s concept of what they thought should be into the world of juxtaposition that I’m proud SPITSET has become. 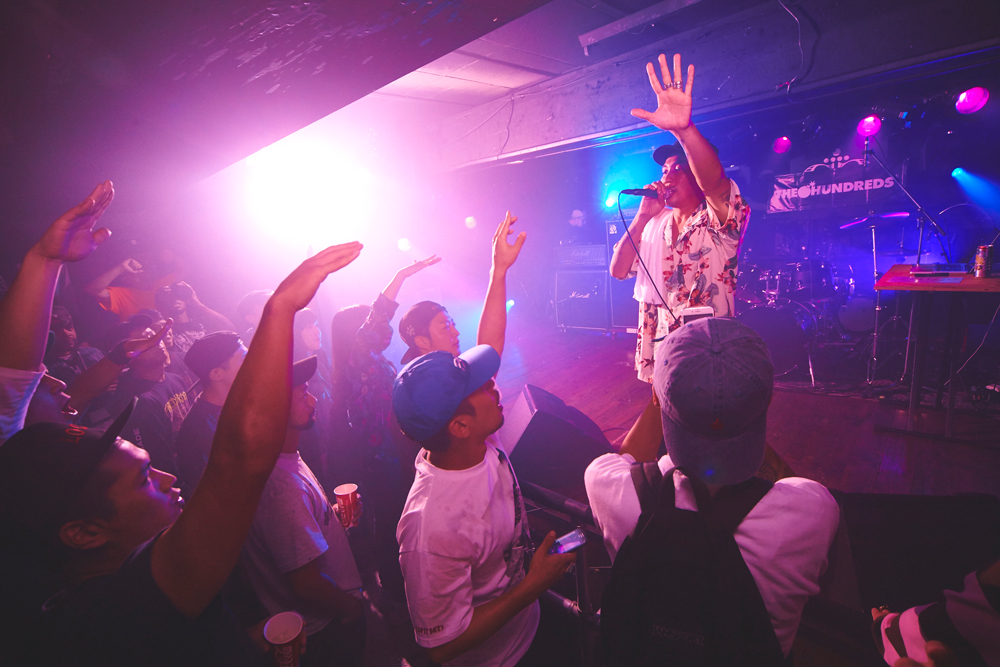 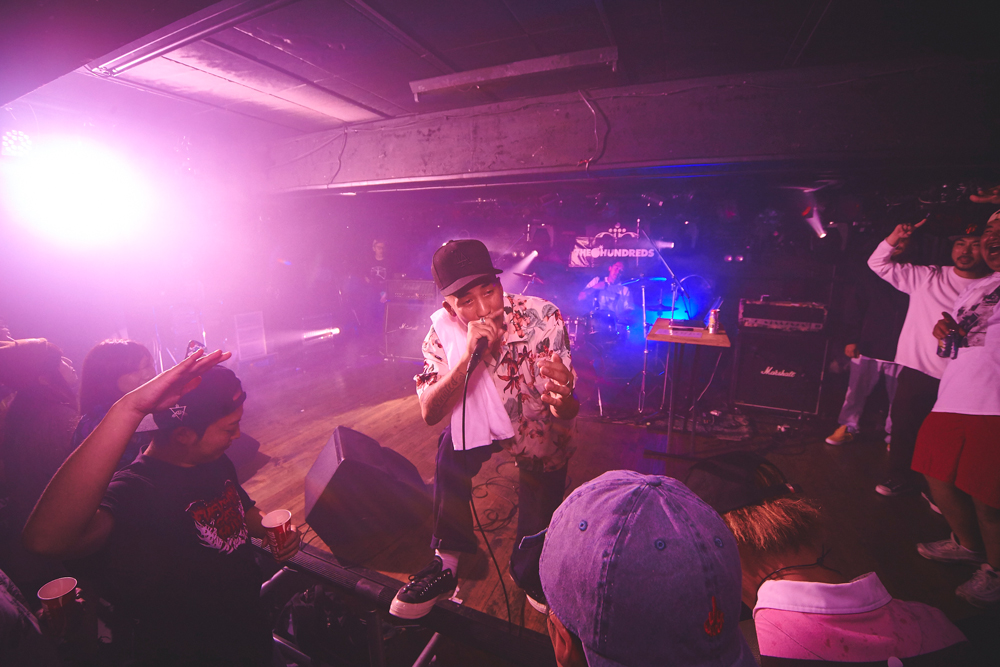 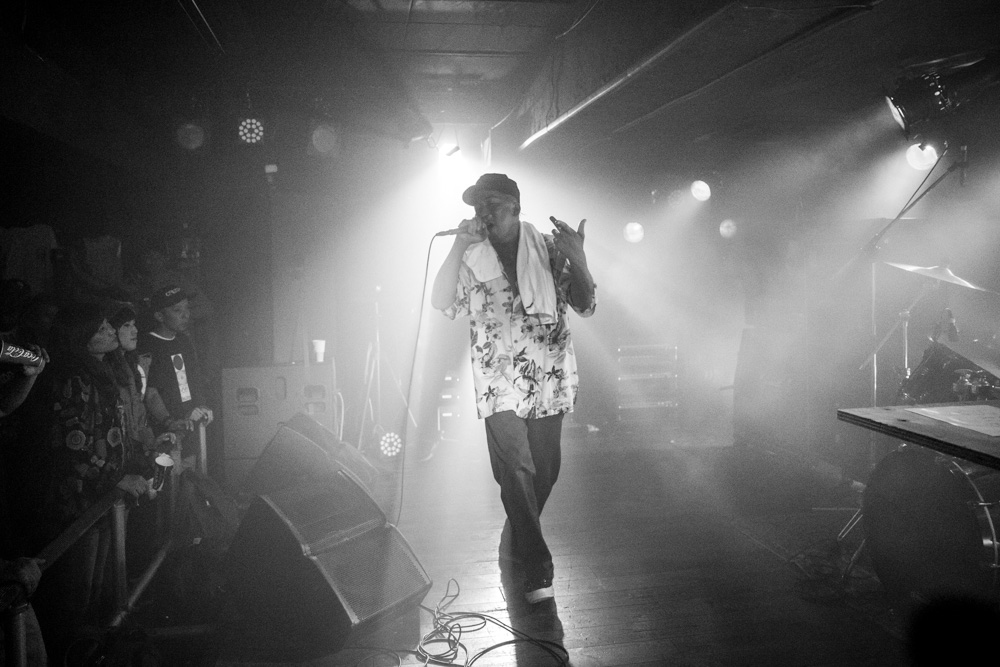 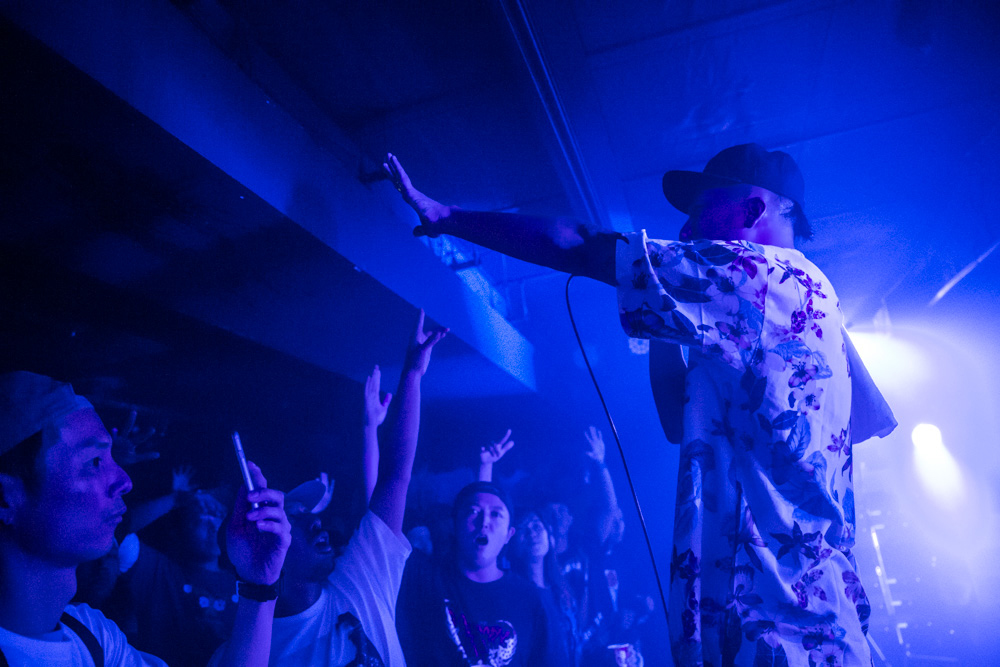 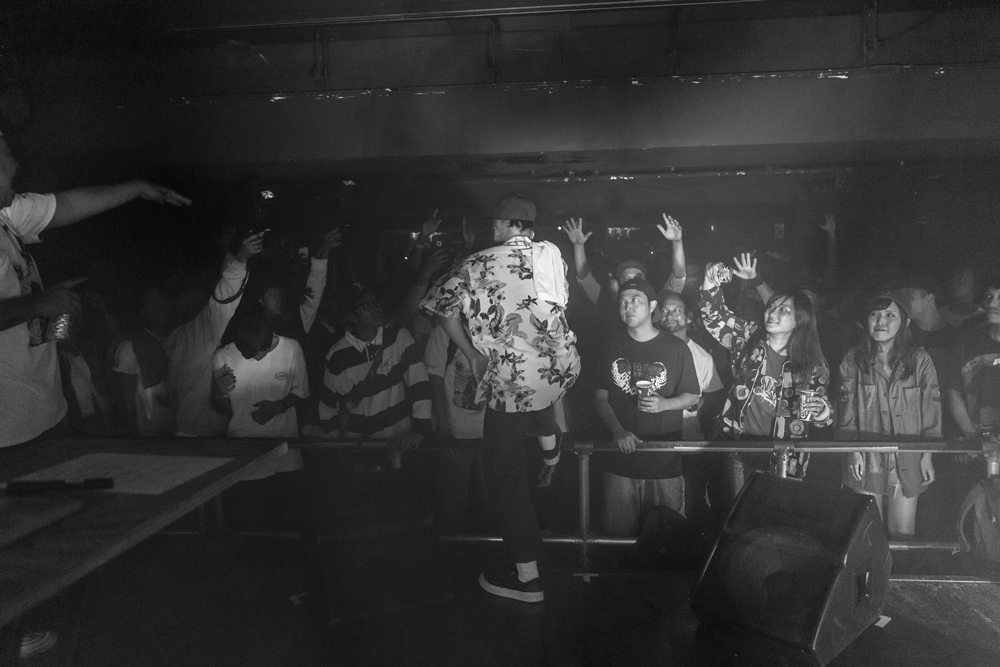 It was my first time performing in Tokyo, and from the beginning of my set to its bittersweet end, I received nothing but love from a crowd that showed no concern for the language barrier that existed between us. Strangers rapped along to verses. When I dedicated songs to specific homies I’d lost this year, Japanese friends destroyed the pit for me in memorial of our mutual loss.

I repped the Bay Area, RSWD and my best friends and family to a crowd of smiling punks. I lost my breath from over excitement and muscled through verses with my eyes closed. I made rough attempts at speaking common courtesy Japanese in between songs. I played songs I hadn’t played for anyone in the world yet. I put the mic down in between songs and told myself I never wanted it to end.

When it was all said and done I made my way back into the mix to enjoy the rest of the night. The vibe was real and it felt like everyone in the venue made sure to show love. I shared drinks with strangers in celebration while I worked my energy back for the headlining performance by TRAPPED UNDER ICE. 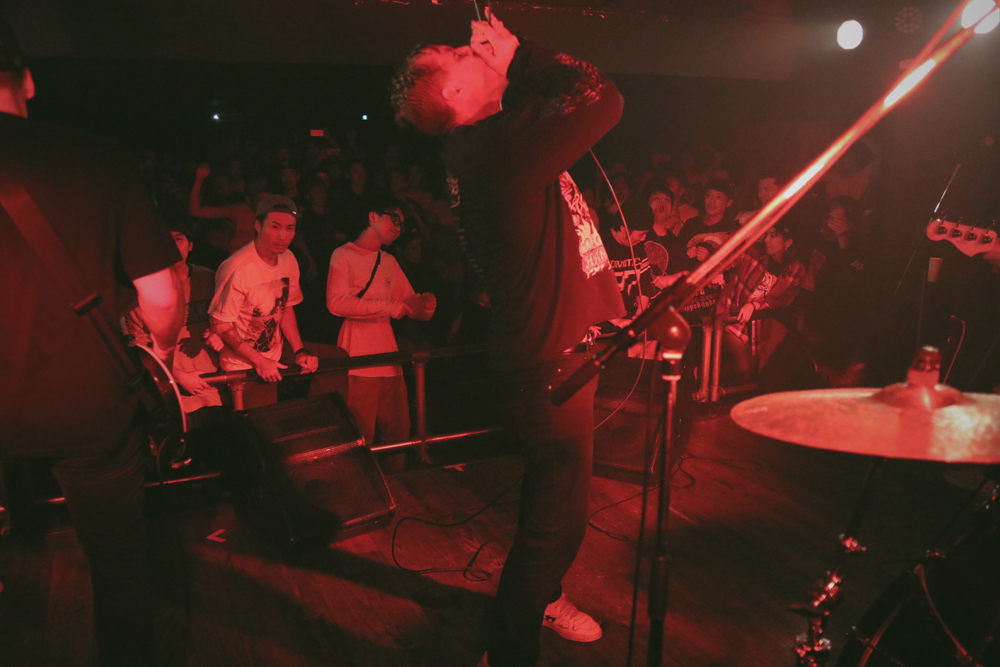 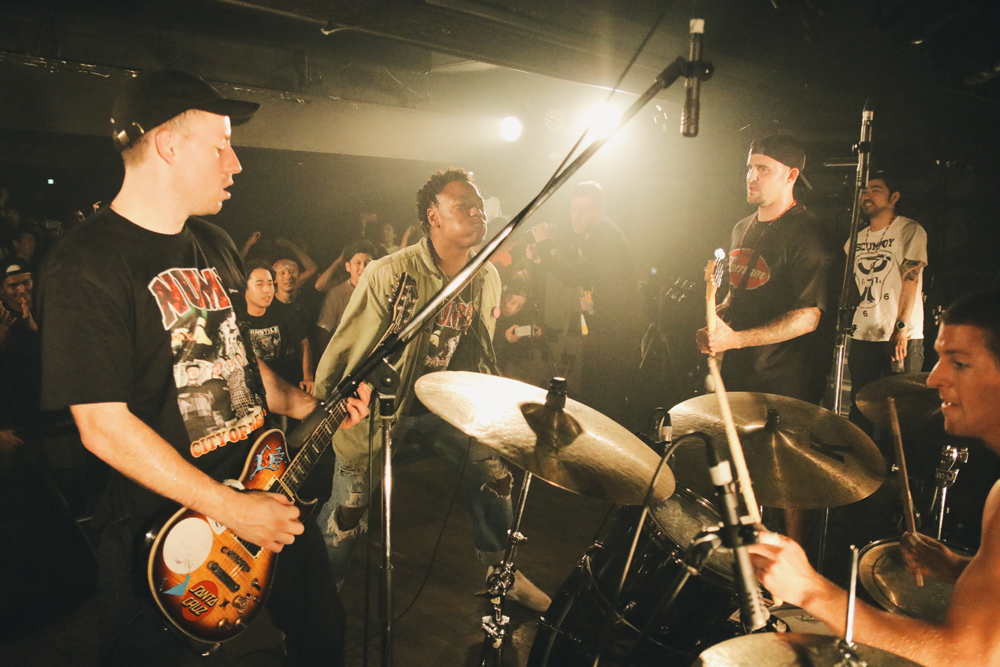 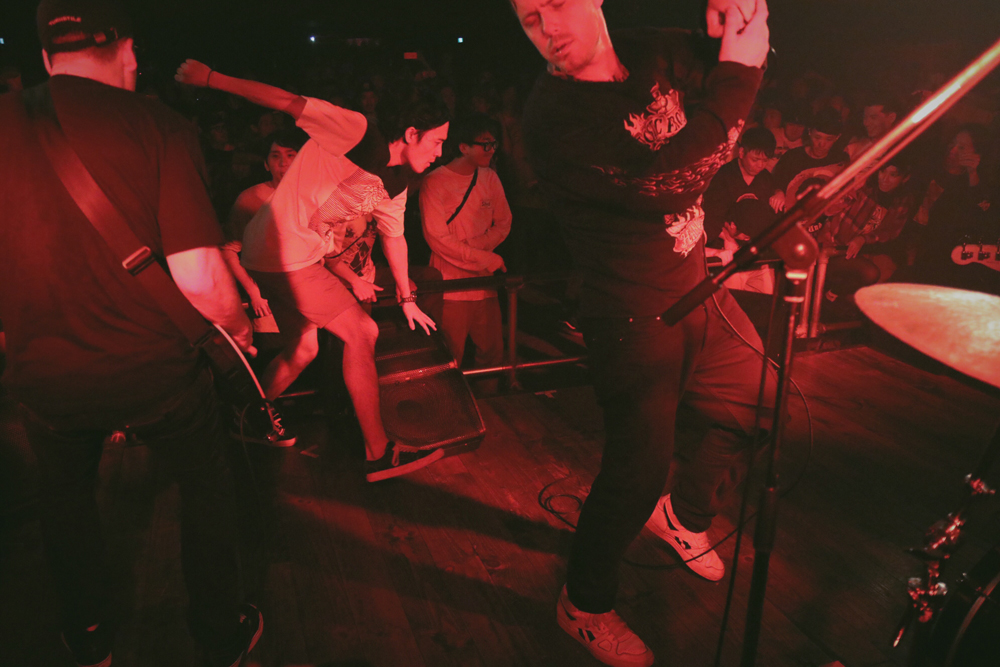 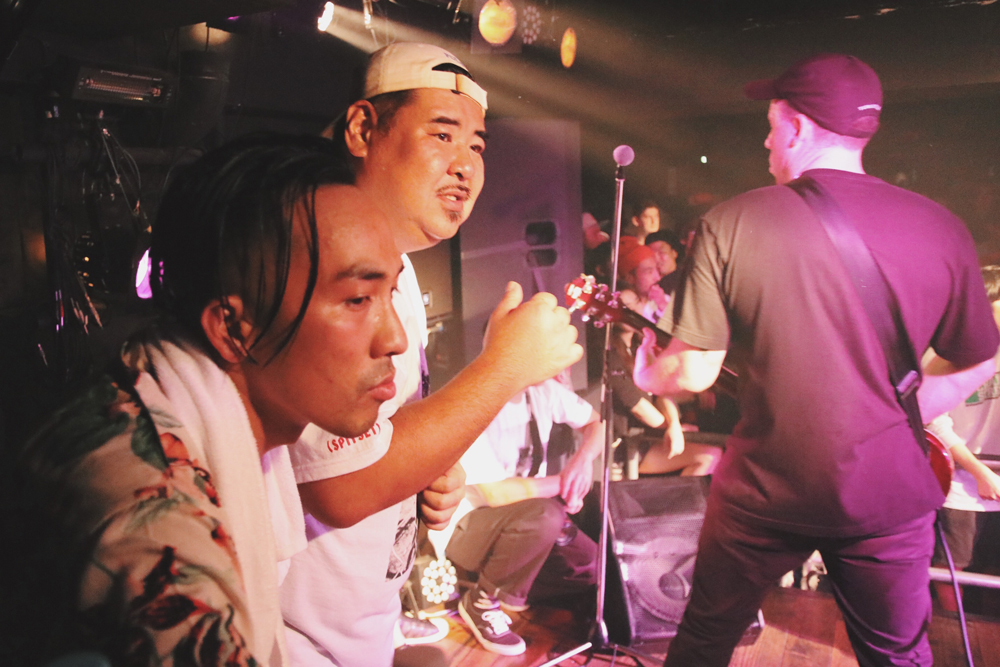 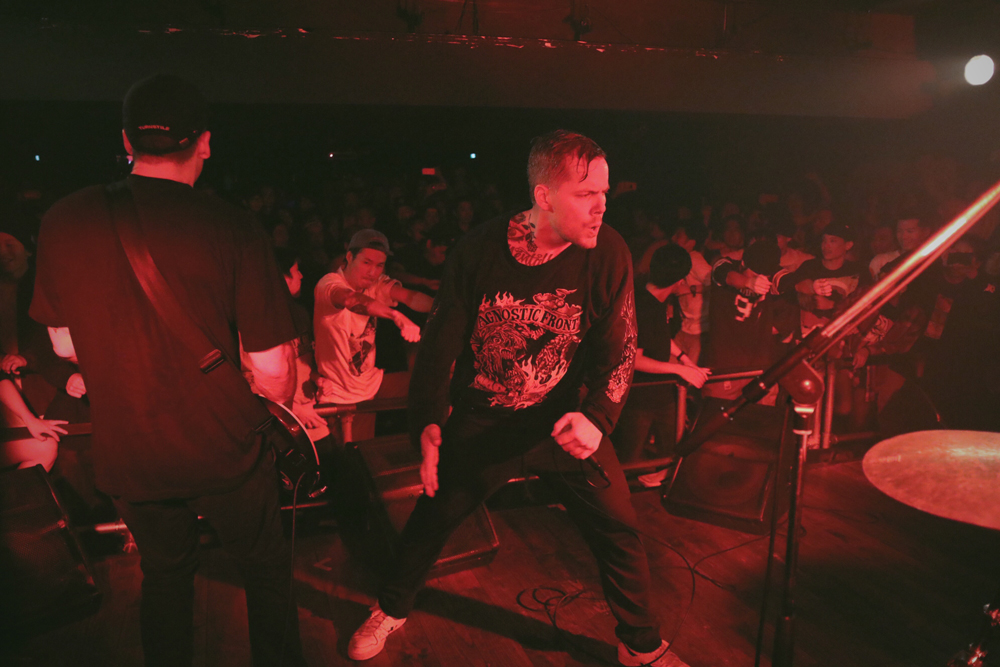 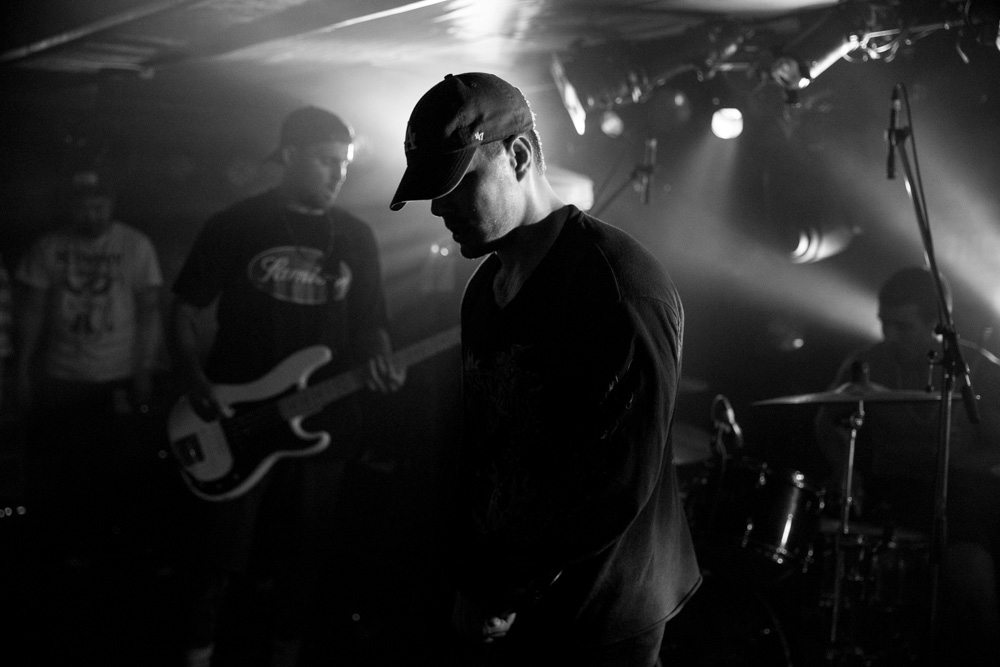 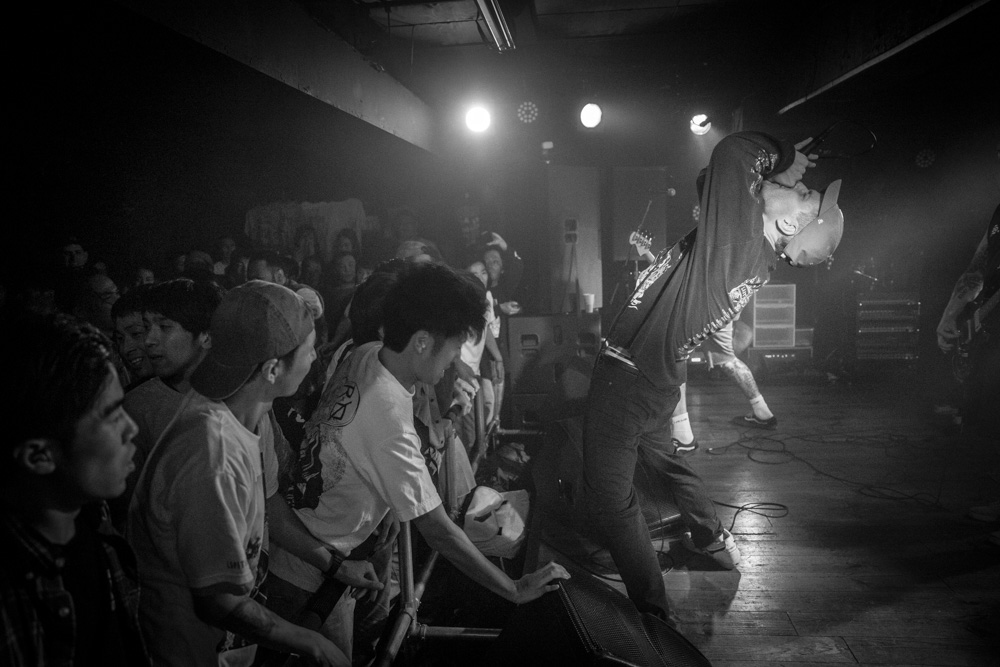 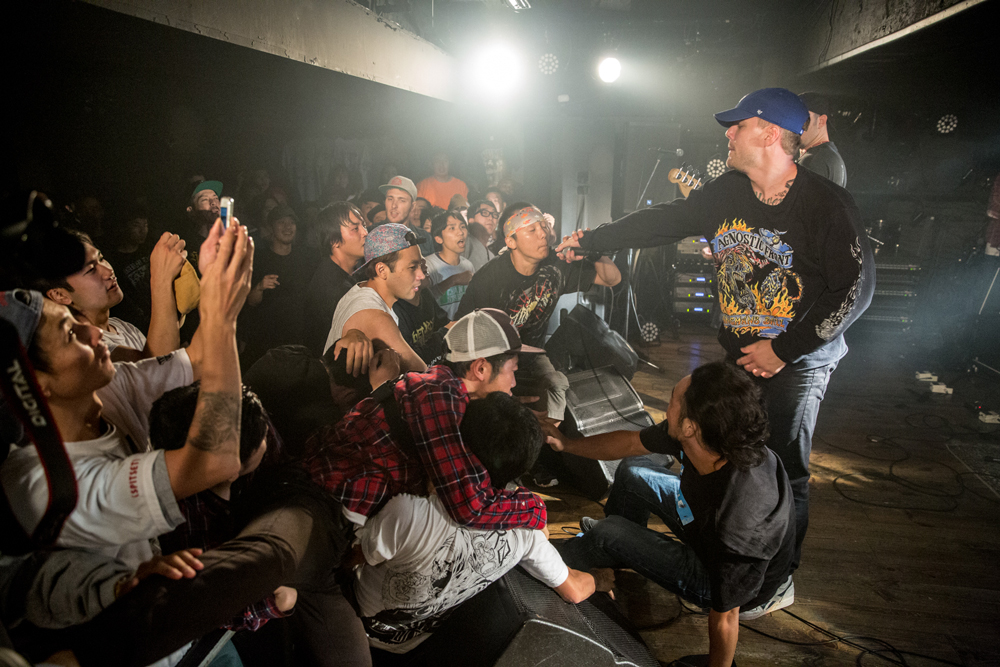 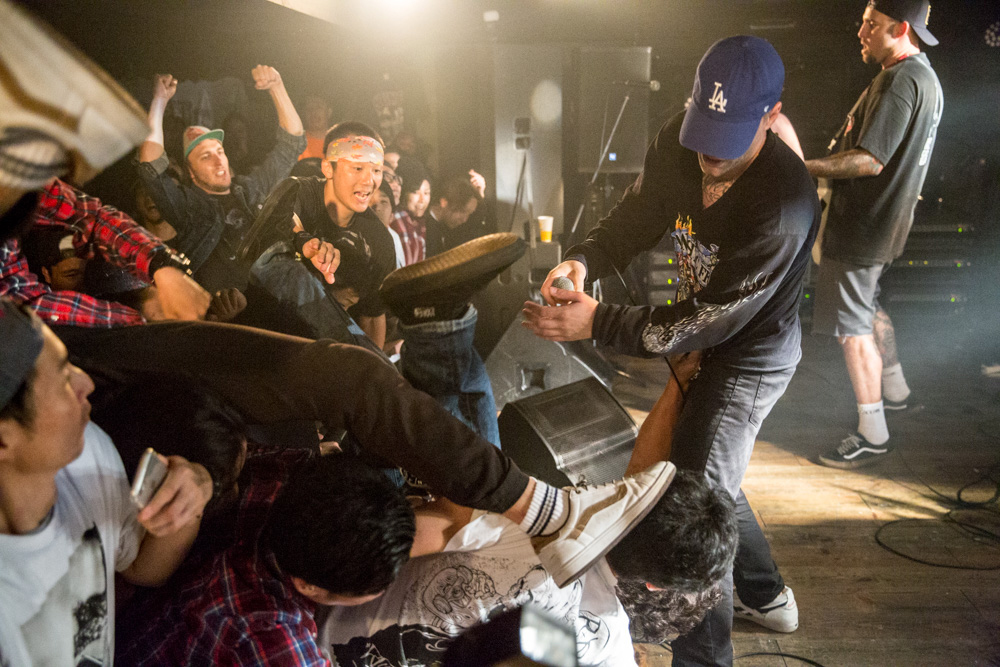 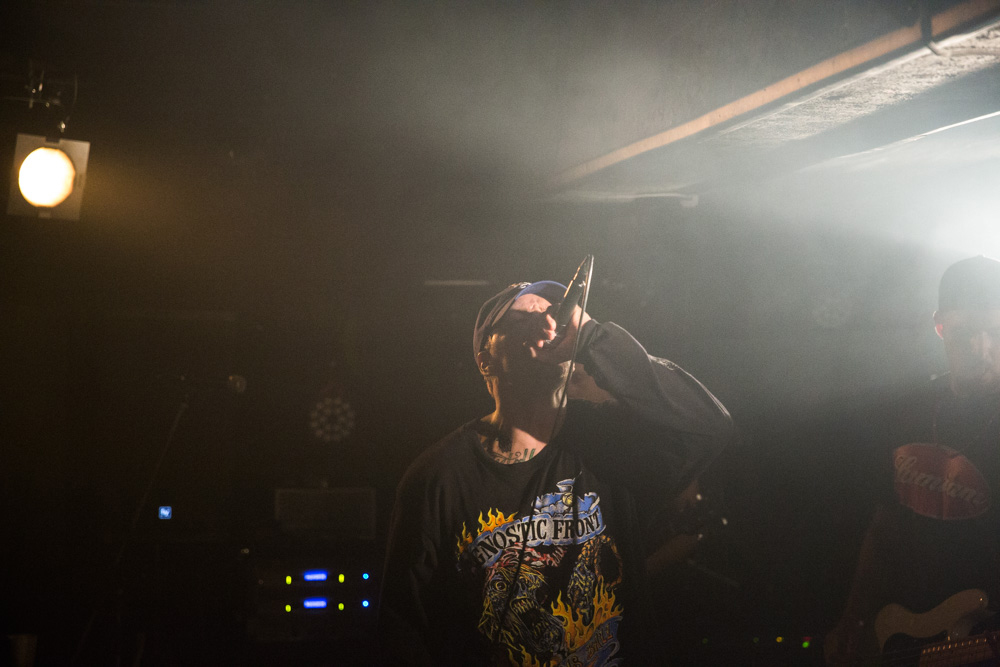 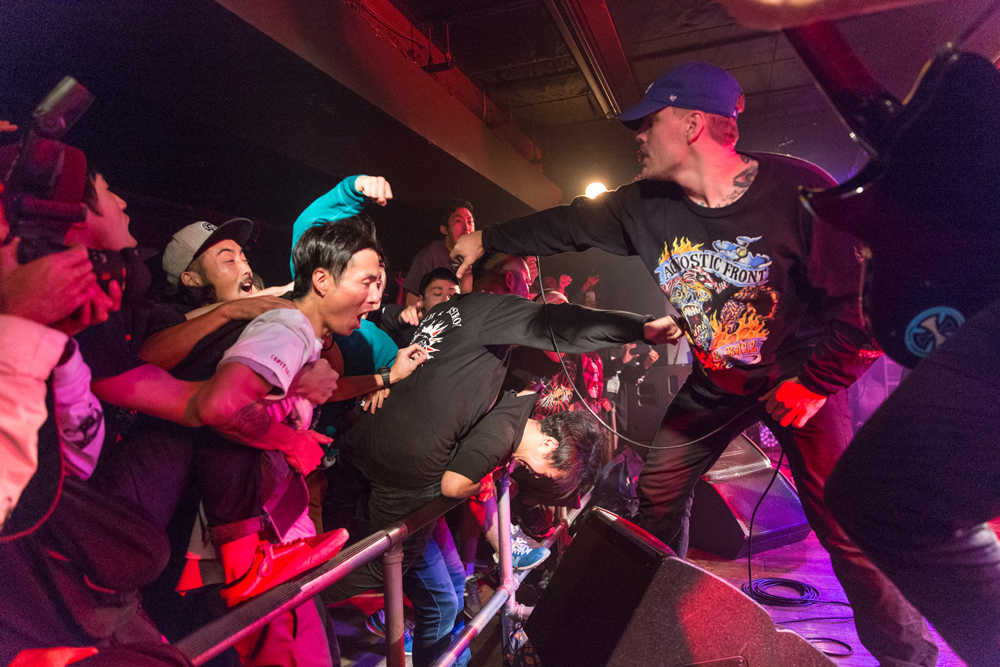 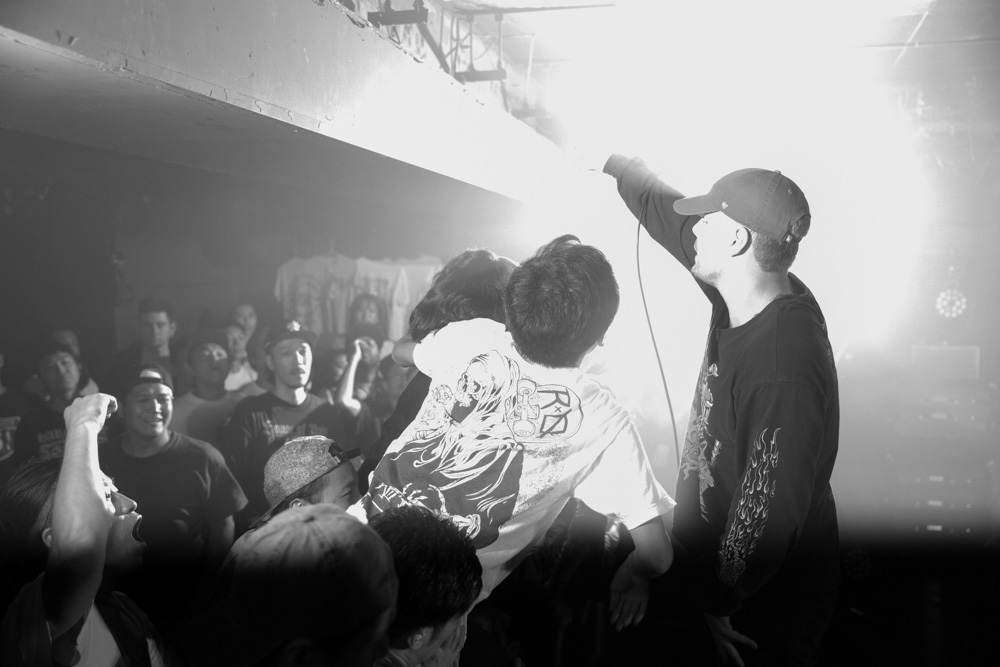 TRAPPED UNDER ICE was the ace in the hole for the night and brought everything to a 10. My room mate and front man of TUI, Justice, aggressively brought the beast mode out of everyone with a presence of doom on the horizon of the front row. TUI ripped through songs to a dedicated audience that sang along and may have had no idea what they were screaming at the top of their lungs. I watched Ben Hundreds smile in awe at his first hardcore show attendance. OGs like Hikaru of Bounty Hunter squatted side stage casting his legend and aura over those around him. TRAPPED UNDER ICE looked like legends on stage amongst a room full of Japanese kids obsessed with what they represent. They bodied their set as the first headlining hardcore band I’ve billed for the now international concept party known as SPITSET. 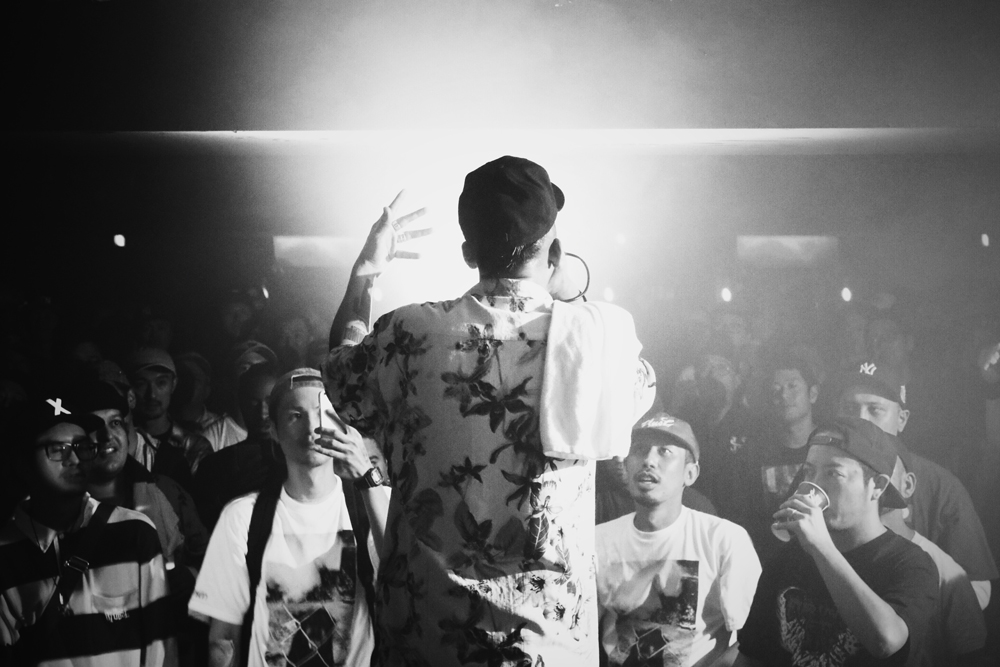 Maybe it was the last year of pain and loss I suffered that made Tokyo’s grace and magnificence so special to me. Maybe it was the fact that my friend Tome, who helped organize the event, turned his entire friend group into die hard fans. Maybe it was shaking every hand in the building that convinced me my decisions to quit music this year were ridiculous. Maybe it was two weeks of everything being absolutely new and foreign to me that made the monotony of everyday life seem forever undesirable.

It was my last night in a city that changed my life and it was clear to me that I’d absolutely be back again. Bobby Hundreds
The third and final stop of The Hundreds' Typhoon Tour. Follow Bobby and the gang as they visit Tokyo, Japan. Kazie Holiday
Last Tuesday, we shut down the Mid City Arthouse for another successful Spitset with Remy Banks, Hugh Augustine, and Theo Martins. Here's some documentation of all the shindigs that went down. Bobby Hundreds
On the second stop of the Typhoon Tour, The Hundreds checks into our home-away-from-home, Hong Kong.
HIDE COMMENTS