Every Wednesday, Todd, Editorial Assistant and resident film geek at The Hundreds, lets us know exactly what to watch, feel, and eat for our miserable hump day night in with “Shut Up & Watch.” So shut up, because tonight, we’re gonna watch a little horror film called You’re Next.

It’s Wednesday night. Tonight, you’re particularly aware of your body hair and the idea of being spotted in public feels unnecessarily risky. With a massive, full moon sulking across in the sky tonight (that’s a complete lie), something feels amiss. What do you do? Stick your finger in your mouth and raise it in the air because, yes, the air is right for a goddamn horror movie. Now, at risk of losing whatever reputation I haven’t actually built by demanding you watch You’re Next – hear me out. I pride myself on my love for horror films. This little 2013, low-budget slasher flick only got overlooked because it came and reared its head the same year The Conjuring, Carrie, Insidious 2, and Evil Dead did. So give me a chance in explaining why You’re Next is a major step in the right direction for my favorite genre, horror. Plus, you can pop this in and trick anyone’s pants off by letting me spot the stealthy intelligence for you to steal as your own. Meanwhile, getting enough gory violence to satisfy any jaded Live Leak lover. 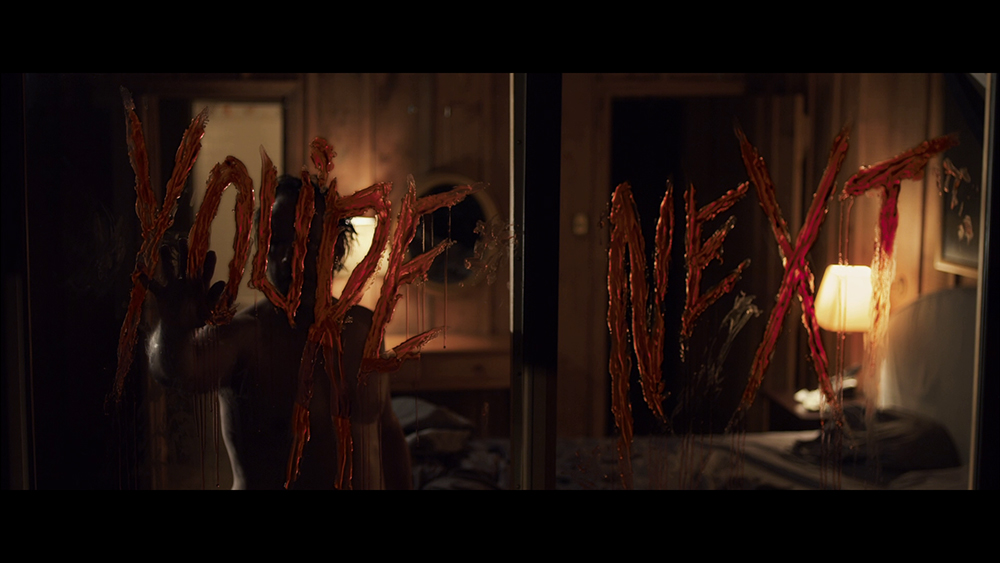 The Movie:
You’re Next

The Reason:
Back when Black Christmas, A Bay of Blood, Halloween, A Nightmare on Elm Street, and a bunch of other groundbreaking slasher films took the world by storm, the immediate outcome was 3,452 sequels splayed across forgotten Walmart bins. The answer? Wes Craven drops Scream – a movie with characters fully aware of the overplayed rules. In showing his knowledge of the rules, he was able to break them and give way to a whole new set of them. But of course, with any success, the same exact thing happened – 3,452 sequels and countless unoriginal mimics of originality. Now, James Wan sits on the throne of big budget horror, leading the annoying routine of extremely blue horror movies about possessions and houses; only nailing it with The Conjuring. Where do we look for fresh stuff? Indie films, where found footage was being practiced everywhere. But then that got played and now we’re back in a directionless, over-saturated horror wave. So what’s next? You’re Next is next.

Along comes You’re Next, the $1 million budget film about a home invasion to change the rules yet again. So you want to see You’re Next to see get a small hint at where slasher horror is headed because this isn’t the destination, but it’s certainly a stepping stone. And because Cabin in the Woods isn’t on Netflix for some stupid reason. 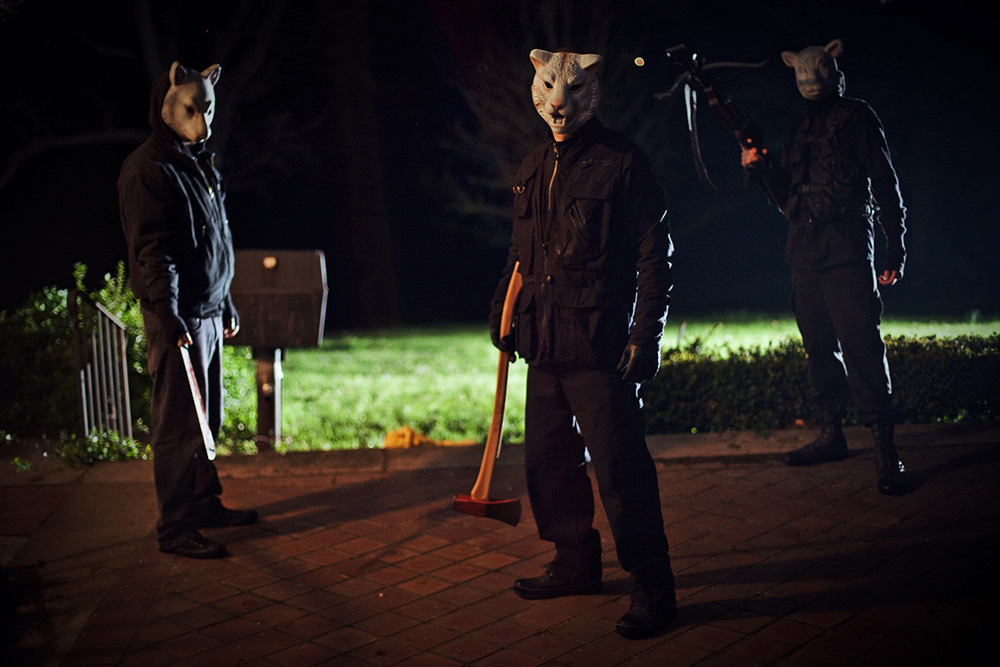 How to Watch:
You can stream the movie here:
Google Play
Amazon
Or you can borrow my Netflix if you can find a way to ask me.

You should always watch a movie in the same style of that movie. That being said, if you’re watching a horror, you bet your ass you have to have a ritual of some sort before you press play. Of course, if the sun’s out, then the DVD shouldn’t be in. Every single light needs to be off in your house – yes, including the one in your bathroom that you can’t see from your living room. Horror movies – slashers in particular – are only fun because its watchable danger from a safe, seated position. So you want to get as close to that danger as you possibly can because, regardless of how bad I wish it did, nothing’s going to happen. Ever. It’s a shame. Last two things: if you’re watching it with someone and they say something along the lines of, “It’s a bit loud don’t you think?” Then you’re watching at the right volume. 80% of the horror and startling effects come from sound design, it’s the most overlooked aspect of horror movies. And since after an hour and a half, it’s over and your life is back to uneventful, slightly sad, and numb. So scoot your couch closer, turn it up, and give yourself the ultimate escape from government-sanctioned safety. After all, even roller coasters have safety bars – there’s no real, legal way to feel like you’re in true danger anymore. And with that, no genuine excitement. Except hang gliding, but that’s actually wildly dangerous and involves seeing the sun. So no. You’re ready.

What to Eat:
I’m sick of saying it, you’re sick of reading it: don’t eat during movies. Especially during a mystery horror movie where one look to the left can completely flip everything around. But given that you’re watching You’re Next and it’s perfectly bloody and disgusting (again, there’s an incident with a blender, I’ll leave it at that), you’re going to eat a can of sardines with olive oil on tortilla chips. Why? Because it’s fucking disgusting, you’re disgusting after 6PM on a weeknight, and You’re Next is hilariously disgusting. Sometimes it’s as simple as offending all of your senses. Bask in it.

What to Pay Attention to:
I’m going to try to do this without spoilers. And to keep it short when I’m this excited about horror movies. You’re going to want to pay attention to the director’s, Adam Wingard (Home Sick, VHS, VHS 2), and the writer’s, Simon Barrett (VHS, ABC’s of Death, VHS 2) love and knowledge of horror movies. It does what Scream did – shows a knowledge of the established horror rules so that it can break, and rewrite them. The opening scene has a couple finishing up sex (horror sin), taking a shower (guaranteed death), drinking alcohol (never do that), dancing to rock and roll (might as well kill yourself), and investigating a noise (sealing the deal). Needless to say, those characters die in the first 15 minutes AFTER giving us one of the greatest in-camera movie titles I’ve ever seen. I won’t spoil it, but I always appreciate when people can pull off an in-camera title, the makers knew horror movies can do this. Rules established. Then it goes to on to take the obvious, beautiful survivor girl (Sharni Vinson) and actually has her spring into action the moment shit hits the fan. She’s Xena-level. So by changing that, it makes it so it’s not a “coming into your own” film about a girl. Because, yes, I stand by this, ALL good slasher flicks are about women. The prude loses all of her stupid friends (childish tendencies), her boyfriend (first heartbreak), has to fight her own demon (growing up), and emerges victorious and covered in blood (a gross, but literal symbol for a girl becoming a woman) as a new, strong, independent woman. Yeah, I’m right, fight me. 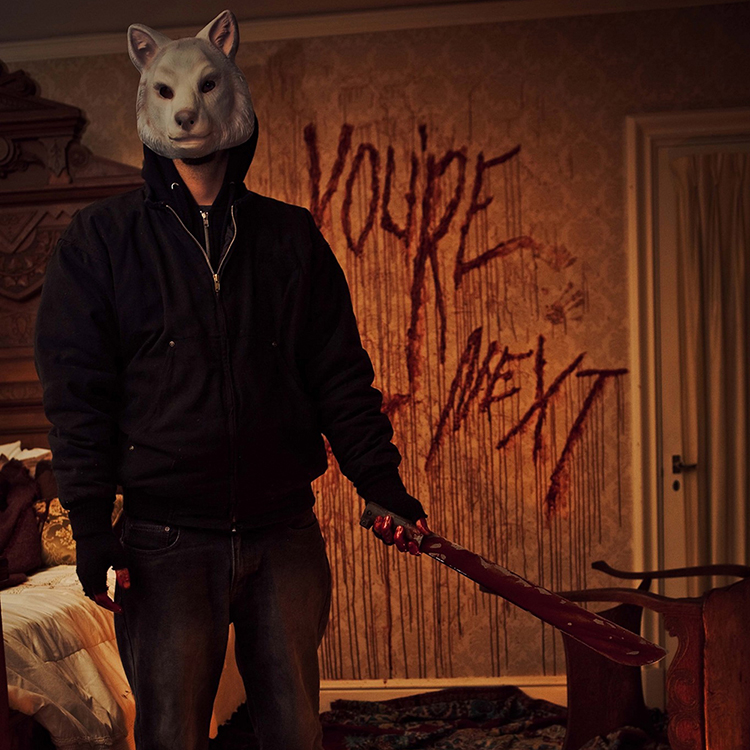 Instead of the classic one-by-one killing of the survivor girl’s stupid, teen friends, this is a rich family reunion of middle-aged, married, spoiled kids and their respective wife/husband that are randomly hunted by intruders. For the first half of the film, the massive cast is somehow all together and all see the first death. Plus, it’s absolutely a comedy poking fun at high-class, suburban, dysfunctional families. It literally has a son (Joe Swanberg STEALS THE SHOW) telling another brother that he’s still fat while an arrow sticks out of his shoulder blade. This is after he gets denied sex from his wife and rummages for pills in her purse as another way to numb his rich ennui. With a whole slate of characters (family), a whole new horror dynamic can be explored, and a new slasher breed is birthed. The humor element does take away from a bit of the horror, but actually enhances (Evil Dead-style) how disturbing it is; particularly when it comes to the absolutely perfect and necessary ending. But you can really hear the director laughing out of kiddish excitement with every single death. How? For example, one of the deaths has the most epic five minute build up with a near-Family Guy quality payoff. Plus, it spends just the right amount of time on getting you to love the characters before they’re hacked apart.

You’re Next may have a cheesy title, but it’s really the perfect one for the tone it sets up. It breathes new life (a small breath) into the slasher ensemble potential, showing that there’s still room for experimentation that works without ruining what the classics set up. It’s hilarious, it’s way too gory, and, for once, every decision the lead girl makes is the most badass and correct decision. 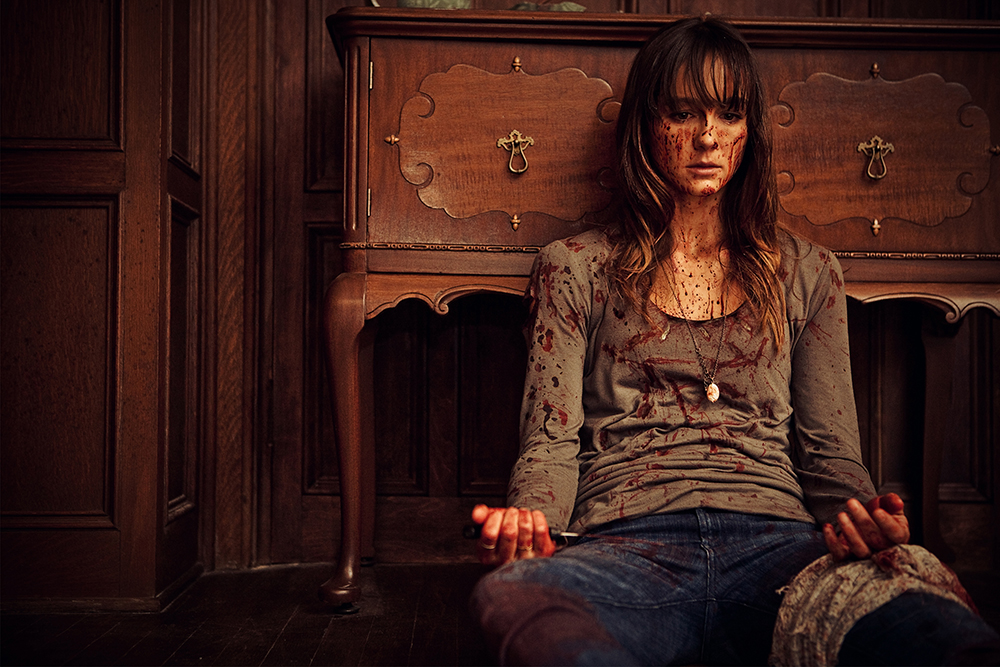 Discuss:
Look, I got into movies through horror movies (and Star Wars). So it took every single ounce of self-discipline and spirit mutilation to not make this piece 26,486,439 pages long. I left A LOT out. So if you saw this movie and disagree or agree with me, I’d be way too stoked to hear what you think. Or have someone catalyze a rant about the state/history or horror movies or my personal favorites. Or even why horror movies are somehow more unique than any other genre and always pull in butt loads of box office cash. We can also talk about what James Wan is doing wrong or why Oculus shouldn’t have been so well-reviewed. Even how Cabin in the Woods is the #1 contemporary horror movie without argument. We can argue about it. Anything to let me talk about horror movies more. Or not, I can just bug another worker here at The Hundreds. "SHUT UP & WATCH" MOVIE NIGHT :: THE ONLY CULT MOVIE THAT'S ANY GOOD

Todd Knaak
Wednesdays are now your hump day movie night & Todd is here to tell you exactly what to watch, what to eat, & how to enjoy it. Tonight we're watching legendary '90s cult film, CLERKS. Oh, a... Todd Knaak
Wednesdays are now your hump day movie night, and Todd is here to tell you exactly what to watch, what to eat, and how to enjoy it. Tonight, we're watching the most offensive film ever, called FILT...
HIDE COMMENTS