Skateboarding is inherently creative. The use of public spaces in unorthodox ways trains the skater’s eye to see the world around them differently. This shift in perspective lends itself to the arts. Through unique approaches to art, photography, and music—skaters have been leaving their mark on both sidewalks and the art world for decades. Recognizing this, adidas’s Cullen Poythress and Natural Koncepts’ Josh Zickert birthed “The Showcase,” a quarterly hybrid of a group art show and talent show sponsored by adidas that highlights the creativity in the local skate community. After a successful year-long run in New York, adidas has decided to take the Showcase global. With stops slated for São Paulo, London, Tokyo, and Los Angeles, skaters around the word are set to experience this unique grassroots event that will spotlight the talent in their scene. I recently caught up with Poythress and Zicker to get their take on the importance of this event and why it’s not just another group show featuring skaters. 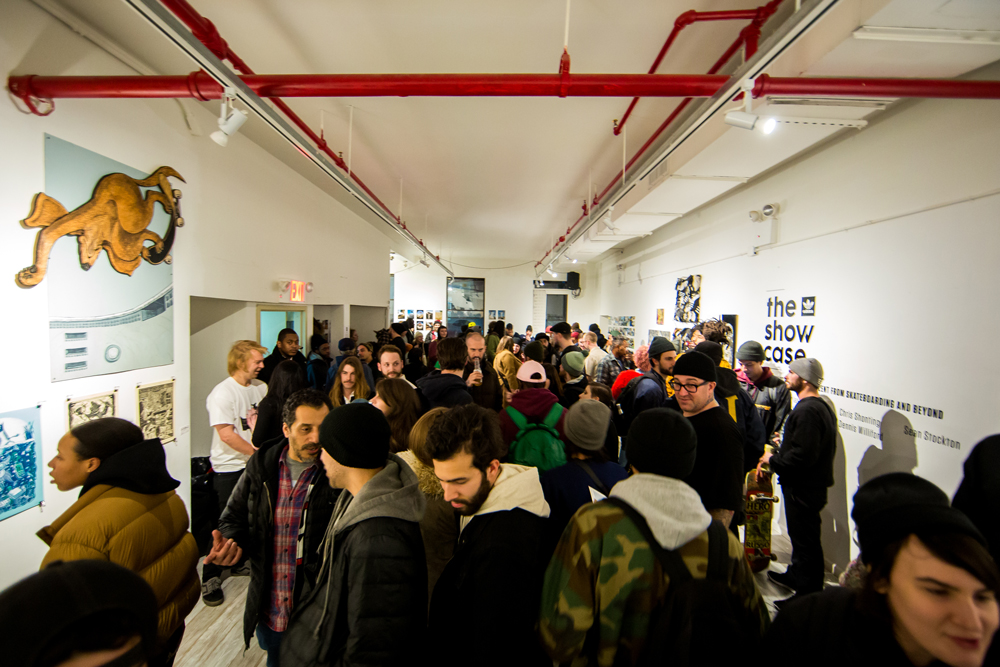 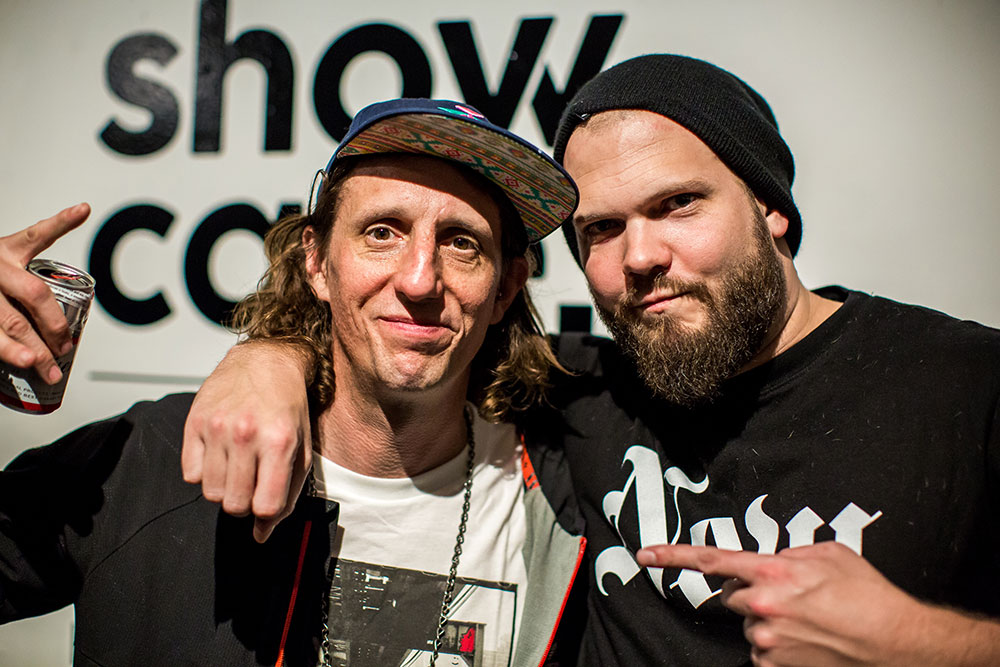 LELAND WARE: How did the adidas Showcase start?

CULLEN POYTHRESS: New York City is obviously one of the most important and influential urban centers in the world and is home to an unbelievable amount of creative talent. We created The Showcase as a community driven platform for up-and-coming artists from in and around skateboarding to come together, be seen, be heard and collectively celebrate the creative spirit of the city in the most fun and authentic way possible. After witnessing the energy and excitement around our first event we held in early 2016, we knew The Showcase had the potential to develop into something really special. Now we’re on our sixth show and things just keep building with artists, musicians, hosts, DJs, and other contributors lining up to play a part. It’s pretty incredible to see the New York community coming together in such a genuine and positive way.

“Skateboarding has a long history of producing heroes who end up changing the conversation around art, music, fashion, and style.”

How important is it for adidas to spotlight the artistic talent that comes from skateboarding?

CP: Spotlighting the creative talent within the skateboarding community is exactly what it’s all about. Anyone who comes from skateboarding understands that it attracts some of the most creative people in the culture. Skateboarding has a long history of producing cultural heroes who end up changing the conversation around art, music, fashion, and style. The Showcase is about empowering those individuals who are bold enough to create and share their work. The Showcase is about the people and community first—the brand is very hands off when it comes to producing these events. It’s the artists, skaters, and musicians that come together organically to make these gatherings happen—adidas is just there to support the movement and help these people share and continue to create. 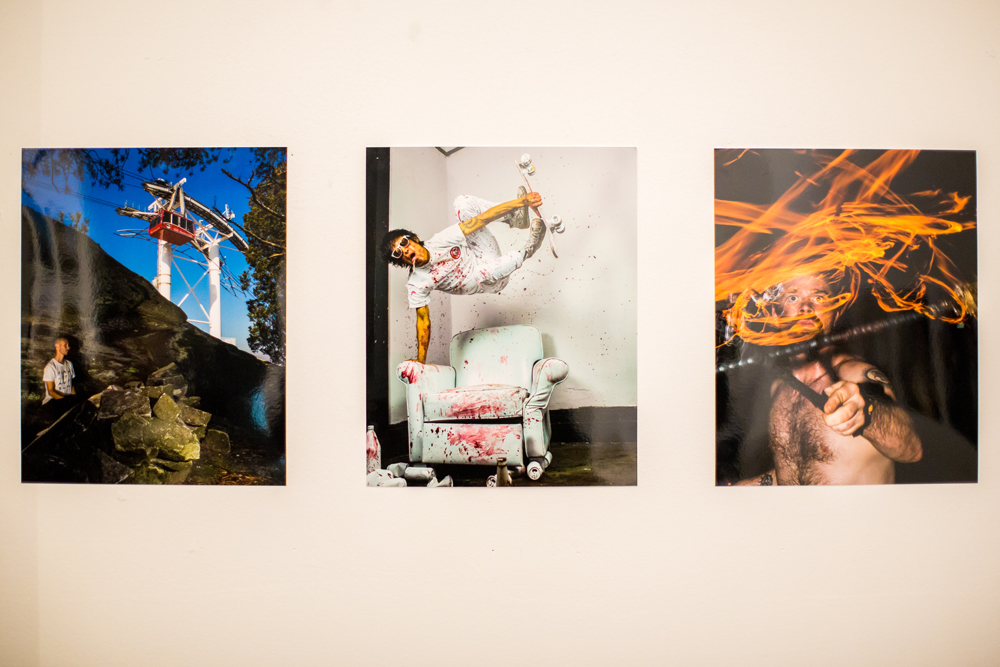 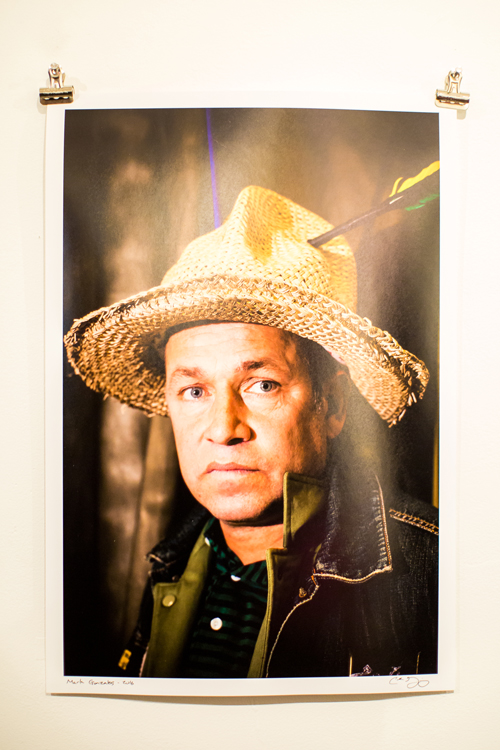 At what point did adidas decide to take The Showcase from being a New York-based event to a global level, and what prompted that decision?

CP: New York is definitely an important hub for creative talent, but I’ve yet to travel to a major city globally that didn’t have its own unique voice. The Showcase is there to help bring together and expand the voices of the city and in 2017, with all the success we saw in New York, we wanted to extend the show to other major cities in the US and abroad including Los Angeles, Tokyo, Paris, São Paulo, and more so that artists in those local scenes could participate and be seen and heard in the same way as New York.

What differentiates The Showcase from other group shows?

CP: The Showcase is all about giving up-and-coming artists and musicians a chance to be seen and heard and for a lot of these guys and girls, it’s the first time they’ve publicly shown their work. That’s really what gives The Showcase so much energy and buzz—these artists are eager, excited and want to share their creativity with their networks of friends and family. Watching a group of young creative people curate the walls of the gallery together the night before each show is pretty damn cool to witness. It’s collaboration on a really pure and real level where everyone is supporting everyone else, interacting and building together. That’s the essence of it and that’s what we’re in it for. 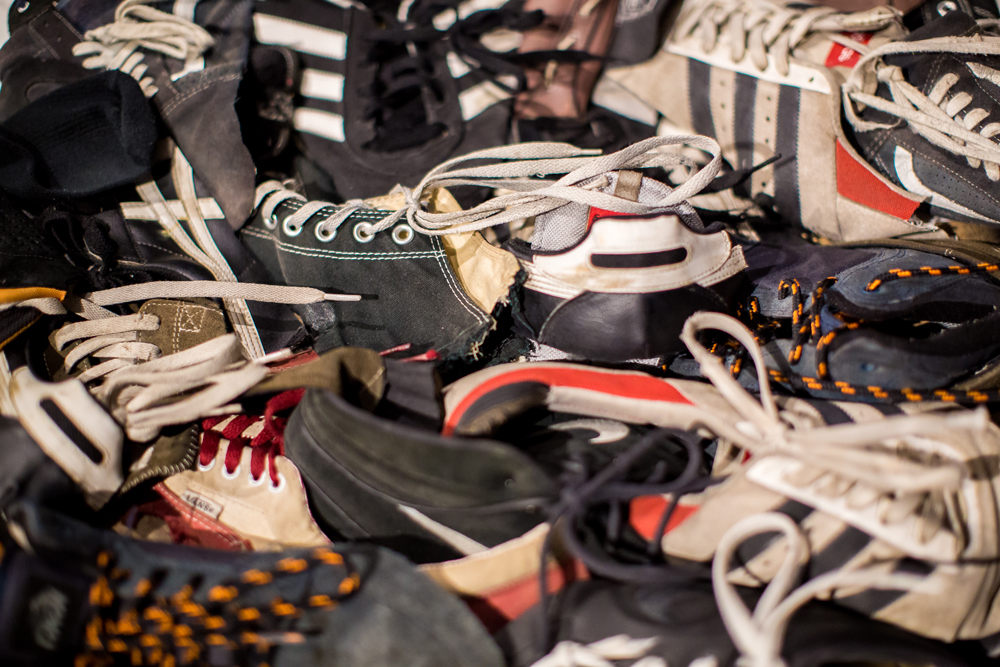 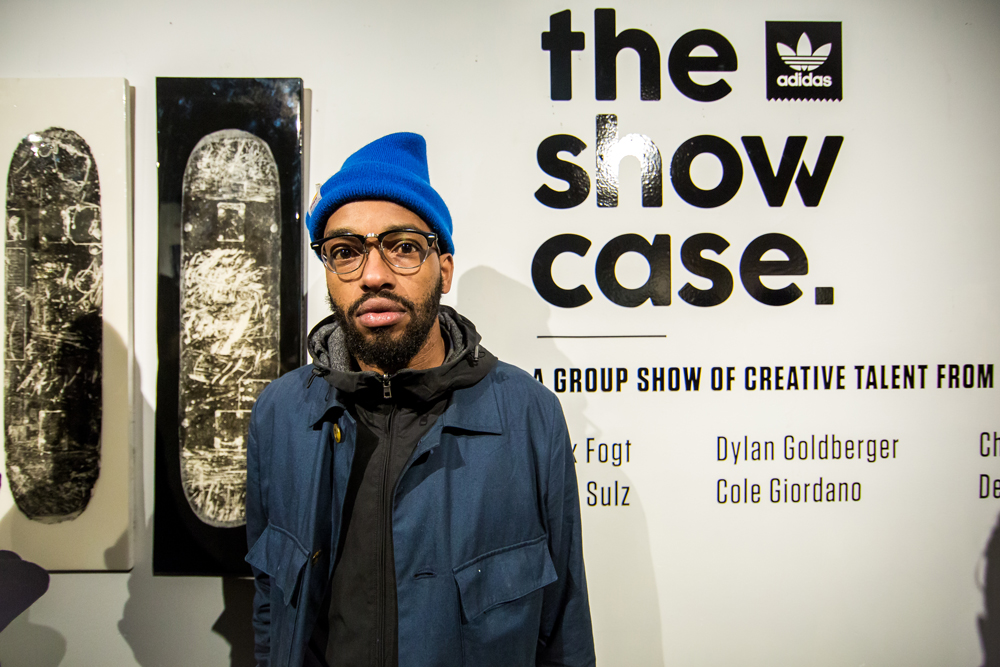 How did you go about conceptualizing The Showcase?

JOSH ZICKERT: Cullen Poythress and I were talking about the New York Skate scene and ways that we could bring everybody together. We were talking about how everybody is so talented and do so many cool things. So we came up with the idea of doing a talent show of some sort. I’ve got this killer space, the Soho Arts Club with Harif Guzman. So we figured why not pick eight people that do killer stuff and put them together in a show. That’s how the first Showcase came about. We reached out to everybody that was directly connected with skateboarding in some way, shape, or form. The first one was the third week of January 2016. It was just the idea of giving back to the skate community and showcasing everyone’s talent. It worked out really well and we had a great response.

“It’s collaboration on a really pure and real level where everyone is supporting everyone else, interacting and building together.”

The majority of the artists chosen for The Showcase thus far have not shown before. Many of them are not even known for art. How did you come up with that formula?

JZ: It was pretty easy actually. We didn’t want it to be just a photo show. But on the other hand, several people who’s talent we were showcasing are photographers. So for each show, we decided to grab artists who were working with different mediums. We figured that mixing up the mediums would differentiate the showcase from other shows. That’s how the formula came about. We even picture people doing stuff like comedy sets in the future. We really want it to be like a talent show. And of course you always feature a band or a performer, a DJ, and a host. We’re really trying to fill in the blank space and allow everyone to interact. And for most of these guys, it is their first show. But we pick a couple of heavy hitters to kind of anchor the shows as well. 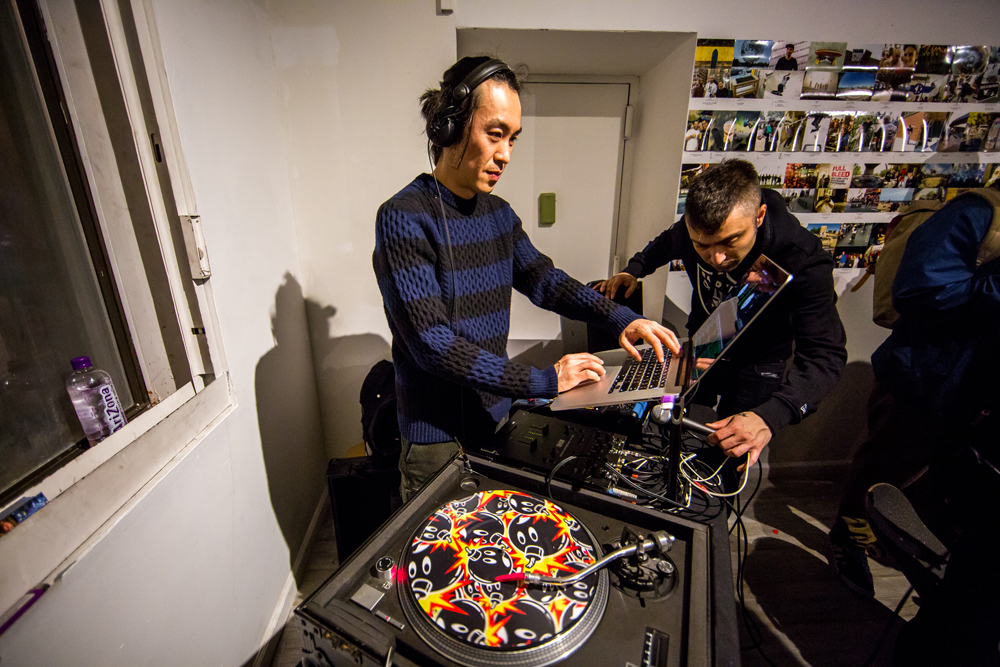 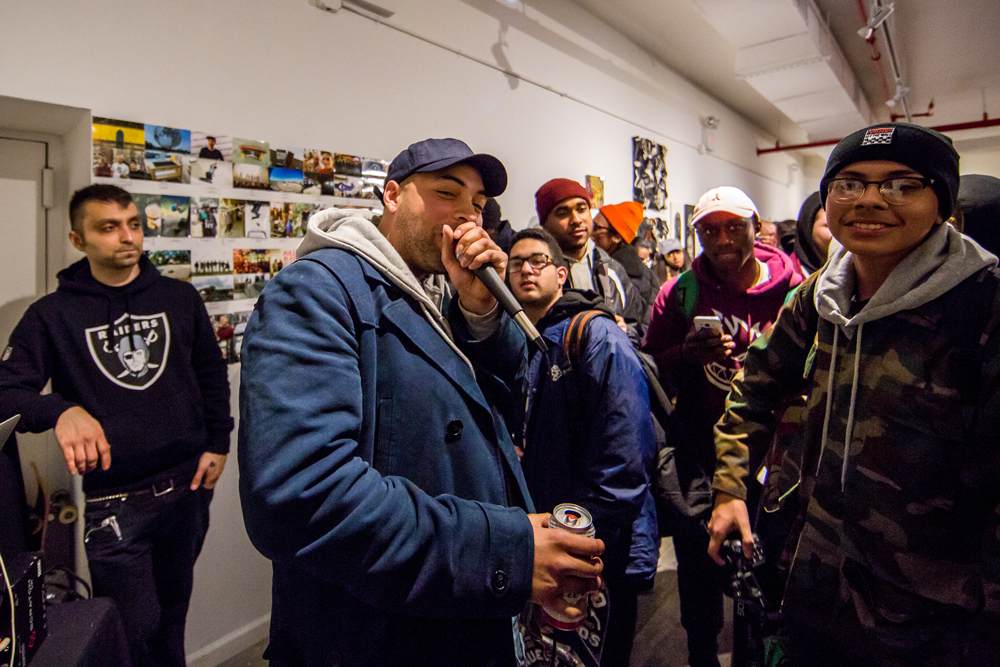 Now The Showcase is going global. How does it feel to see something that you had a direct hand in creating going from a local event to popping up in different cities around the world?

JZ: It feels great. We’re really excited for these other scenes to showcase their own talent within the skate scene. It’s a really simple formula that we’re really proud of. And also I think it’s really going to hit hard across the globe. I don’t see how it couldn’t. There’s so much talent within the skate community. I’m super proud that adidas is the one to help bring these guys together.

Being that you were able to create a successful grassroots event on a local level that has now evolved into something bigger, what advice would you give to someone that wanted to do something similar in their area?

JZ: You just brought up something that’s super important. People all over can do this exact same thing without it being an official adidas show. They can reach out in their community and bring an event together in a local skateshop or whatever. Everyone gets a wall. Good things are going to evolve from that. For words of wisdom, I would say just get involved. Reach out in your local scene and collaborate. 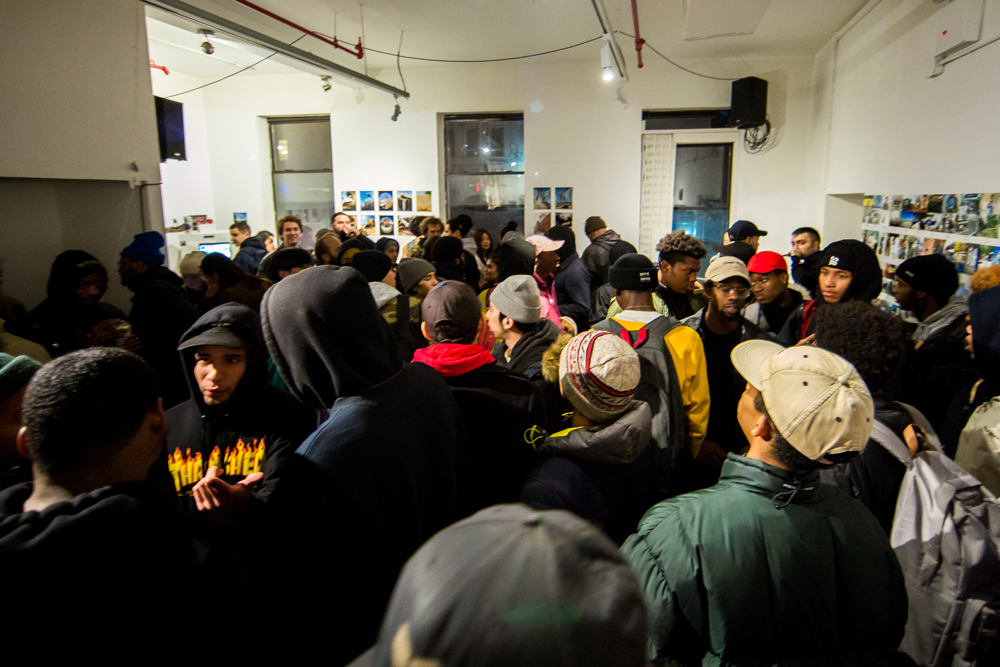 Leland Ware
"The level of skating has gone up, while our attention span and the longevity of a video project has gone down." A history lesson on an East Coast scene that shaped a generation: RB Umali talks fil...
HIDE COMMENTS