On Street Photography :: A Guide to Shooting the Street

“How do you go about taking photos of people [strangers] on the street [candidly and posed]?”

That’s the main question—a rather general one—that folks ask me when seeking advice about photographing strangers on the street.

Though there’s no one simple answer to this question. It’s something that gets easier with practice and years of experience, similar to public speaking, I’ve instead decided to compile a list of helpful tips, tricks, and thoughts on street photography that may help you get your feet wet in the craft. We’ll dive into that here in a minute, but first some back story…

There’s been a lot of discussions online lately about what is and isn’t considered “street photography.” While I feel that good street photography is a well-rounded mix of posed street portraiture and candid street scenes, mixed with a dash of urban landscapes—these images are great for resting eyes in the middle of a series, and there are folks out there who feel a photo needs to be completely candid to be a true “street photo.” I think that notion is silly, but will save that for another discussion. Do whatever the hell makes you happy.

Ultimately, what I’m getting at here is that, similar to skateboarding, there are no hard rules in street photography—only best practices (some of which I addressed in my first post). If you want to snap a photo of your special friend smoking trees in a tulip garden and call it street photography, all good. In fact, chances are you probably have more “street” in your blood than some of the “experts” out there… no joke.

The photos I am using as examples here are mostly personal snaps that I took last summer while working on a street-inspired branding campaign for a new hotel in Los Angeles’s Koreatown. (Yes, I occasionally leave San Francisco…)

Street photography really boils down to patience, a little bit of luck, and being able to quickly analyze, compose, and pull the trigger all within a matter of seconds. However, no matter how prepared you are, you have to learn to keep your expectations low. What I mean is, don’t expect to leave the house and kill it every time you hit the streets. That’s just not how this craft works. If you want keepers every time you shoot, I suggest checking out Instagram-themed circle jerks or something… kinda-sorta kidding here.

As an example, there are days where I’ll roam the streets for 8 hours straight and come home with absolutely nothing to show for it. Sure, it’s fucking maddening, but that’s just how it works. I’ve learned to accept it. Sometimes, the energy on the street just isn’t there. You can’t force it. Street photography is very much like playing the slots—it’s a gamble, it’s unpredictable. Some days the machine doesn’t hit, while other days you’ll get three or four bangers in a row… boom, boom, boom.

Street photography is also by no means easy. I’d argue that it’s one of the most difficult genres in photography, so when you do get a photo you feel is pretty damn solid, it’s probably one of the most invigorating and rewarding experiences ever. Believe me, for every keeper I get, there were plenty of duds and near-misses before it. And that will never change.

There’s no such thing as a perfect street photograph—which is part of what makes them beautiful.

When you’re shooting on the street, you learn to embrace the practice of wabi-sabi, a Japanese aesthetic for finding beauty in imperfection. That’s what street photography is all about. Showcasing life as is, but doing so with the utmost pride, dignity, and respect. Remember, we’re dealing with REAL people here.

I personally prefer photography that is more straight-forward: Documentary style, yet complex and packed with energy, emotion, motion, and risk. Moreover, they should showcase truthful outcomes, meaning the subject and environment is being presented in an accurate manner.

And who really gives a damn if your image is a little crooked? I don’t. Symmetry gets boring. Mix it up. Play around with your framing, let loose.

I’ve said this several times before, but tools in photography are irrelevant. The best camera is the one you have access to. Don’t let anyone tell you otherwise.

At the end of the day, photography all boils down to your eye, sensibility, unique vision, style, and understanding of light. Any yahoo—including my 5-year-old son—can put the lens on wide open and shoot a decent portrait with a blurred background.

The first thing I do when looking at a photo is strip it of all bells-and-whistles, i.e. crafty shooting and processing techniques, any nostalgia factors (namely on older photos), and try and figure out what’s really going on in the frame and what, if anything, makes the frame interesting and unique.

Often times, solid street photos are overlooked at first glance as they’re not easily consumed and digested, which is why they’re not popular amongst the tap-tap photography masses.

A real photographer, in my eyes, is an individual that can pick up any camera and, after tinkering with it for a bit, can “make” a unique image with the device. I suggest, finding a camera and lens setup that works for you and master it inside and out. I personally shoot in the 28-35mm range, using primes (fixed focal length lenses) in place of telephoto (zoom lenses).

I only own two cameras and three lenses—that’s it, and I’ve been shooting photos for a long time. Actually, I own three cameras if you want to include the non-battery operated TLR on my shelf that I’m saving for the apocalypse, when the lights go out and stay out indefinitely… 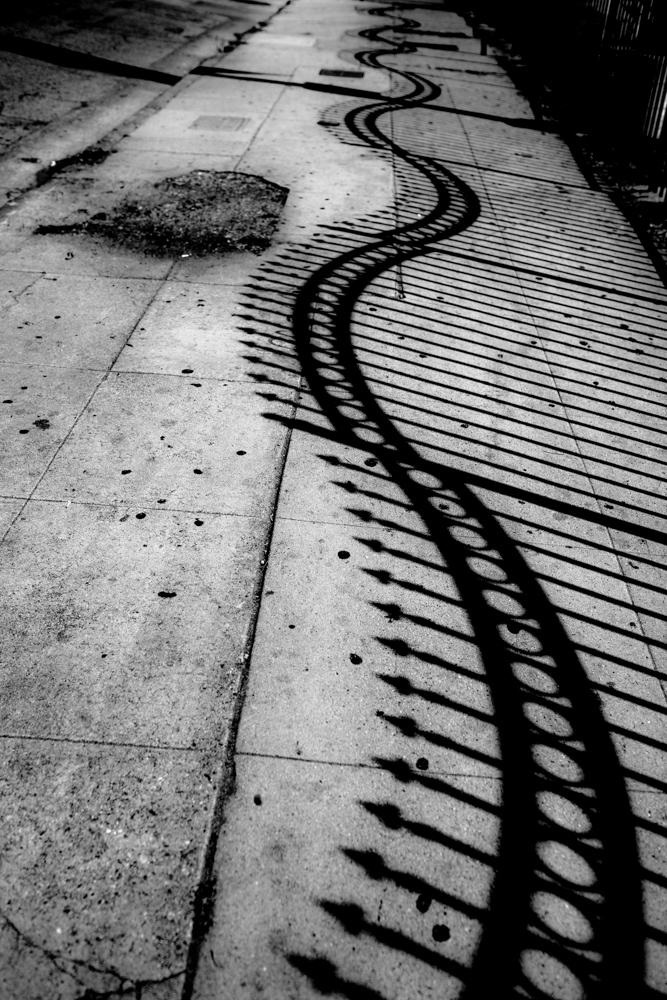 [Editor’s note: We recently had Travis contribute a brand new edition of DISPOSED in our upcoming The Hundreds Fall/Winter 2014 Magazine. DISPOSED is a series in which we hand off a few disposable cameras to photographers—experienced as well as newbies—and get a slice of life through their eyes in return. It’s not about the tools with DISPOSED, nor lugging around a heavy DSLR. Rather, it’s about stripping all of the bells-and-whistles, in Travis’s words, and really seeing what’s in the frame.]

I follow this motto by Robert Capa: “If your photos aren’t good enough, you’re not close enough.”

Though shooting photos on the street is far from dodging shellfire on the beaches of Normandy, good street photography, I believe, is done from a close proximity (28-35mm range) and with the camera at eye level, whether standing, kneeling, etc. I can’t stand looking at photos of people that were taken from down the street, or those that were clearly shot from the hip, resulting in an awkward mess.

What’s there to be afraid of, seriously? We’re dealing with other human beings here… folks with whom we share the same air. Get close, be bold and let your nuts hang (literally for some, figuratively for others).

If you’re shooting photos of people on the street, either candid or posed, you owe it to your subjects to make the best damn photograph of them possible. This goes along with the whole shooting with pride, dignity and respect. Show respect—get respect. Walk the streets with confidence. Stand your ground. You have every right to be out there with your camera, regardless of what anyone says.

I’ve never seen anything good come out of being sneaky on the street. In fact, I’ve only seen it backfire, sometimes resulting in serious confrontation.

Don’t get discouraged by bad experiences on the street. Just remember, it comes with the territory. Dust yourself off and keep it moving. Again, think of delivering a speech in front of 100+ people. It can be both nerve-wrecking and invigorating at the same time, a feeling I’ve personally learned to embrace. 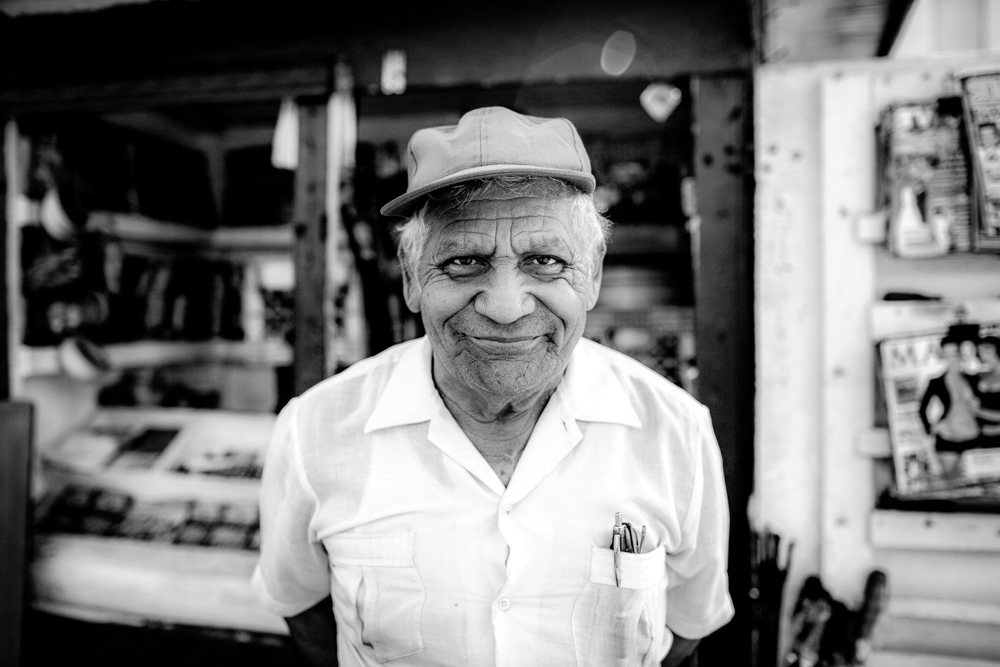 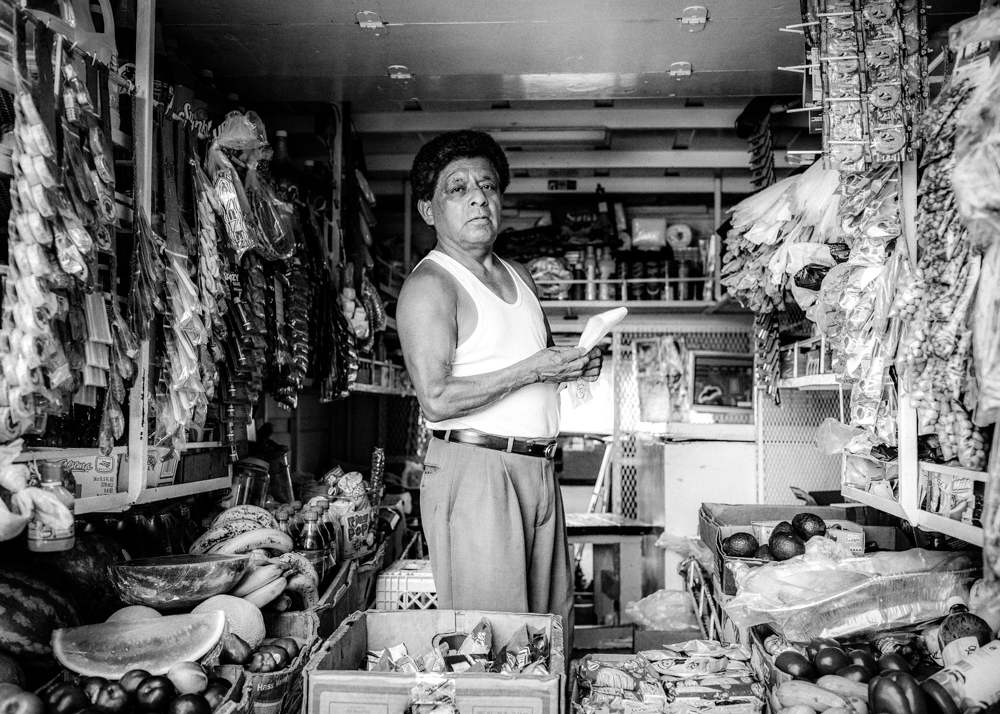 In the end, just have fun out there. Street photography is not a contest, nor a race. Be easy, be safe and do your own thing, always. Don’t worry about what other people are doing with their photography, or focus on shooting what’s currently trending—there are plenty of other folks on that hype. Focus on capturing what’s truly meaningful to you, regardless of what that may be. My personal satisfaction in photography comes from the handshakes, hugs and nods of respect I’m getting in the streets, not the internet… and that’s what motivates me to keep pushing forward.

The Hundreds Staff
You can get your hands on the Nicasio Fernandez edition of The Hundreds Artist Series Bandanas on January 21 from The Hundreds App and Online Shop. For now, take a look at some of our favorite work...

The Hundreds Staff
You can get your hands on the Szabolcs Bozó edition of The Hundreds Artist Series Bandanas on January 21 from The Hundreds App and Online Shop. For now, take a look at some of our favorite work by ...

The Hundreds Staff
You can get your hands on the Andrea Marie Breiling edition of The Hundreds Artist Series Bandanas on January 21 from The Hundreds App and Online Shop. For now, take a look at some of our favorite ...

Duke London
We caught up with the two founders of Absent to figure out how they've taken over the last year or so.
HIDE COMMENTS