Spring has sprung in New York (minus the fact that it’s currently pouring rain) and one of the first warm beautiful days of the year also marked the first day Tofer Chin began installing his new works at Lu Magnus gallery in the Lower East Side. Maybe he brought his hometown Los Angeles weather with him but the dude travels so much, he could’ve brought it from São Paulo or Barcelona or somewhere equally warm and exotic. Chin is prepping for Ar, his latest solo show containing an all new series of works, opening this Friday, May 10th. 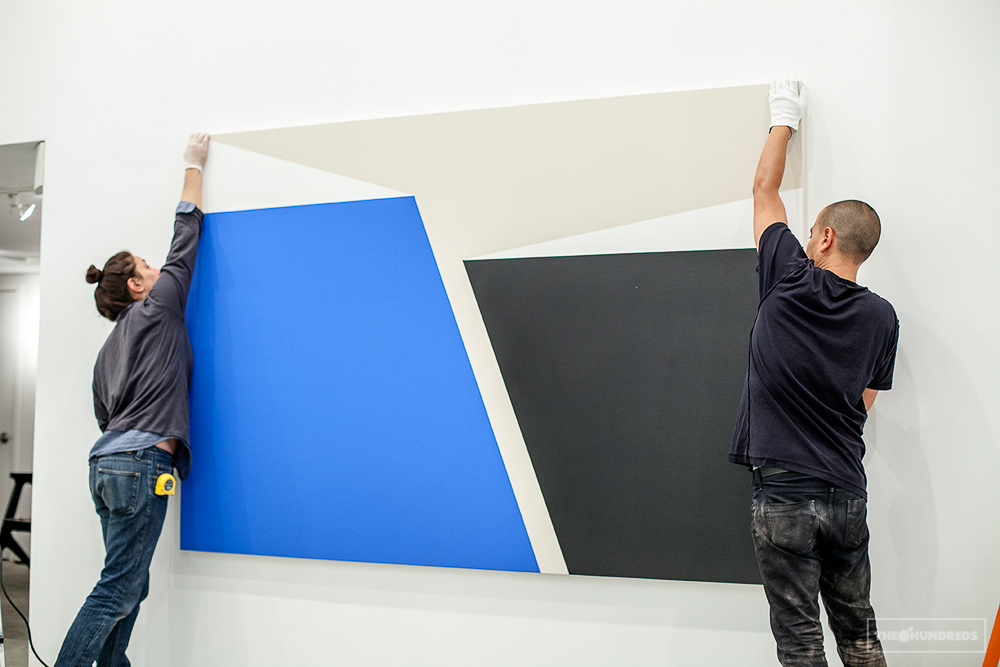 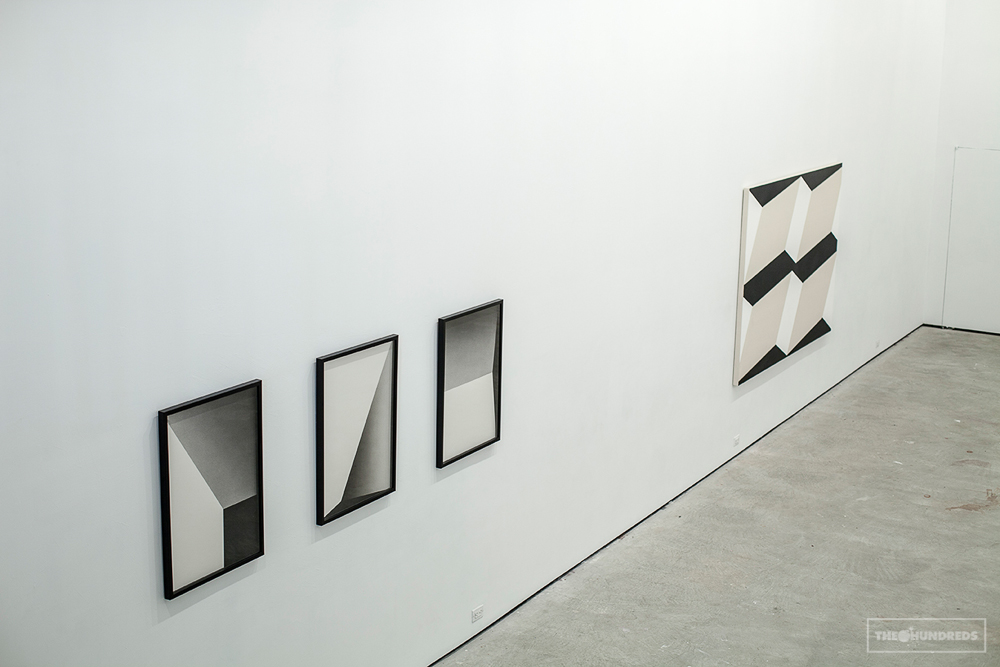 Those who are familiar with China’s aesthetic know it to be somewhat mathematical, incorporating patterns and geometry throughout. In his newest works, he breaks it down even further self-described as a little more manmade (evidence of brushstrokes on handmade paper-type radness, etc.)

As each piece was being unwrapped and hung for the big day, I had the pleasure of checking out a little sneak peek, and chatting with Chin about his work, his travels, music, and food (of course). Between the T-shirt weather after a long winter, and all the unwrapping that was going on, it kind of felt like my own personal Christmas! 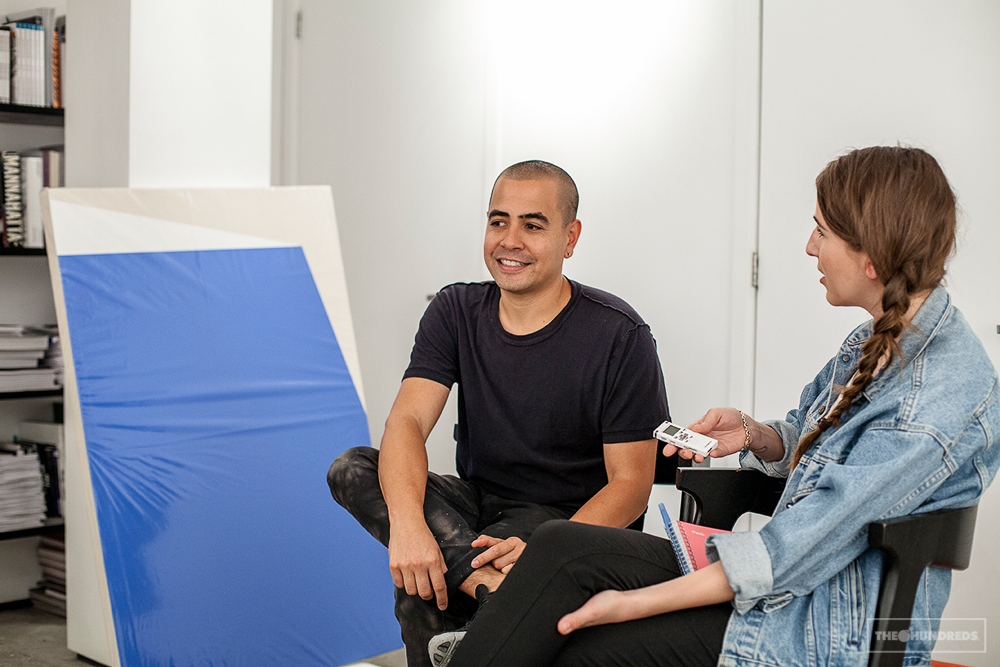 Your upcoming show at Lu Magnus is entitled “Ar” which is “air” in Portuguese. What is the relevance behind the name in connection with the work you’ll be showing?

I’m learning Portuguese right now, and it’s such a beautiful language. This show, and my work in general, has a lot to do with my travels. Travel is an overarching theme within everything I do I take tons of photos of architecture, patterns, and my work consists of my reinterpretation of what I’m seeing.

My past work is super, super slick almost looked like a machine made it. And while my work is consistently being broken down into number, color, and form, this series continues to explore that while simultaneously breaking open the form to create space. This time around you can also see more of a mark of the hand. It’s just a little more stripped down, for example showing the raw canvas. I wanted to expose everything and give it more air. 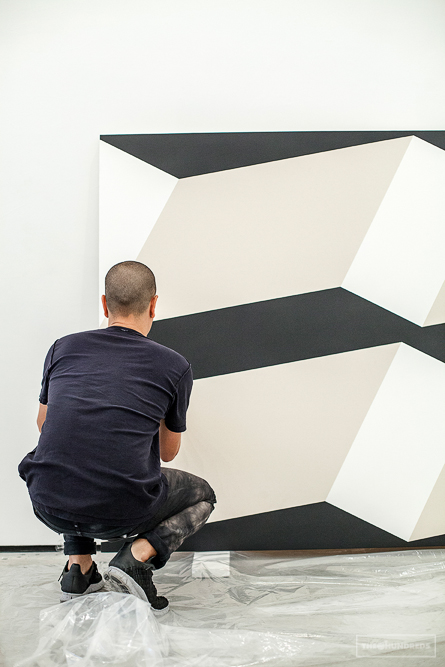 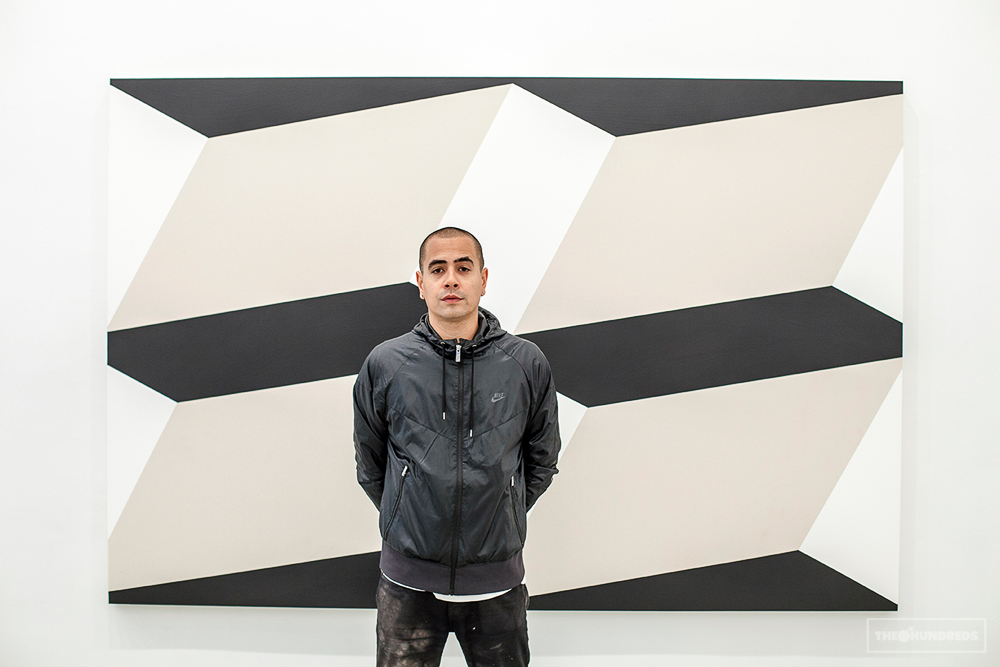 That’s something that’s present in all of my work: the idea of looking through a hole and just seeing a portion of what’s there. With a painting, for example, it’s structured in a square or rectangle but that’s not it – it’s a glimpse into that world. It doesn’t end, all my work bleeds off. I’m just giving you a glimpse.

You split your time between LA and Brazil. What drew you to Brazil in the first place?

São Paolo is the most inspiring city I’ve been to for architecture and patterns. One of my closest friends got married and moved from Barcelona, where he was living at the time, and ended up in Brazil where he began curating. So he would bring me out there for jobs and these crazy installations. It’s also where I met my wife! 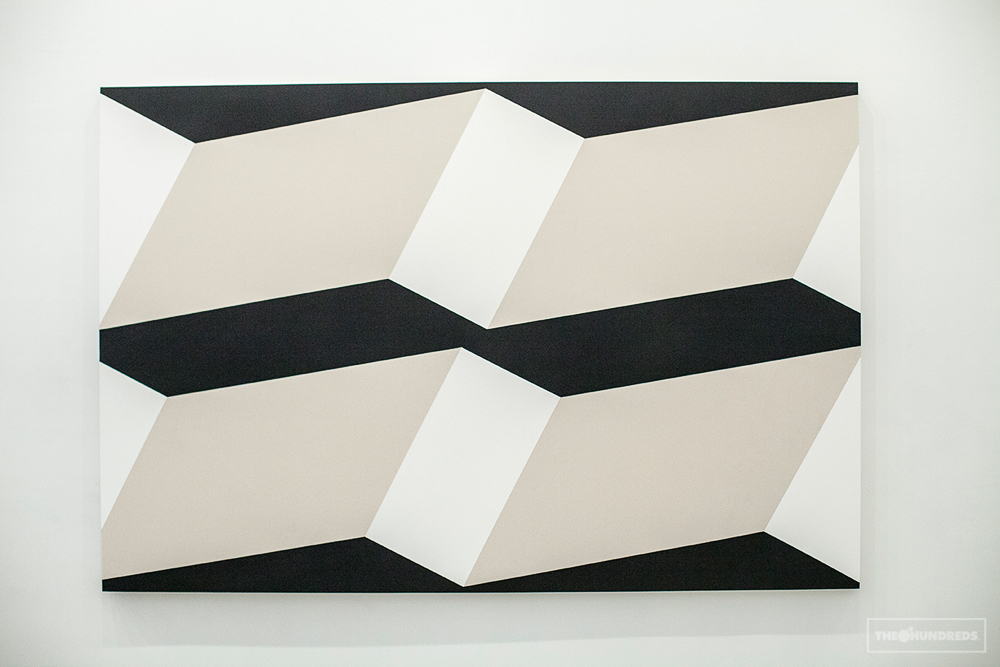 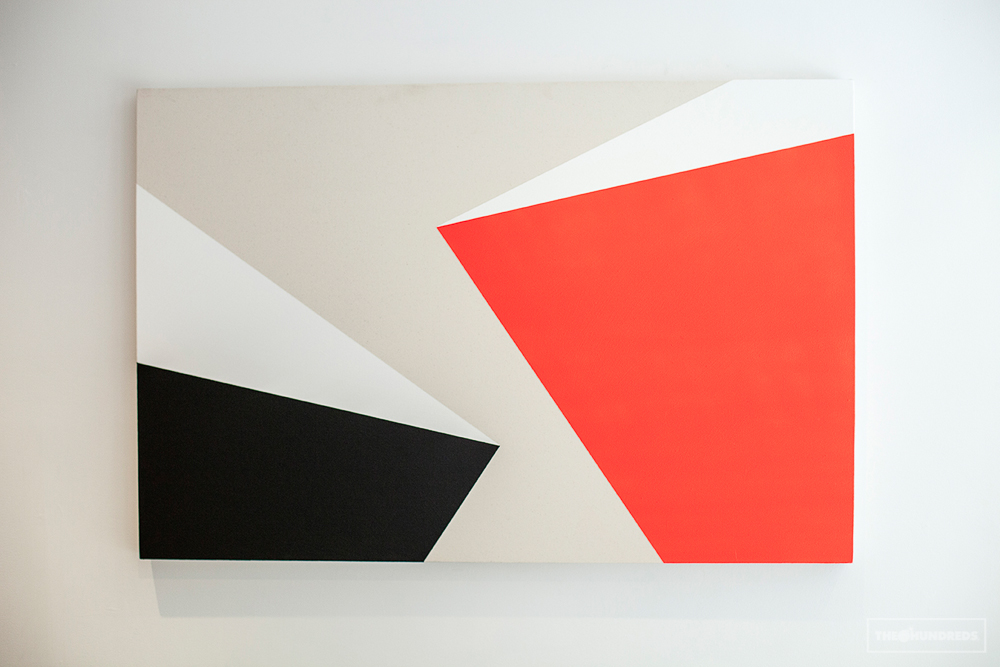 Is there any type of music that you like to listen to when you’re working?

When I’m working, I listen to straight up electronic music.

Really? Would you say that it comes through in your work?

It’s meditative for me because there aren’t really lyrics. Don’t get me wrong, I love Sigur Ros and rock ‘n roll. It just depends on my mood, but more often than not I find myself listening to electronic music!

It’s wild; I feel like with this series it was Araab Muzik over and over again. 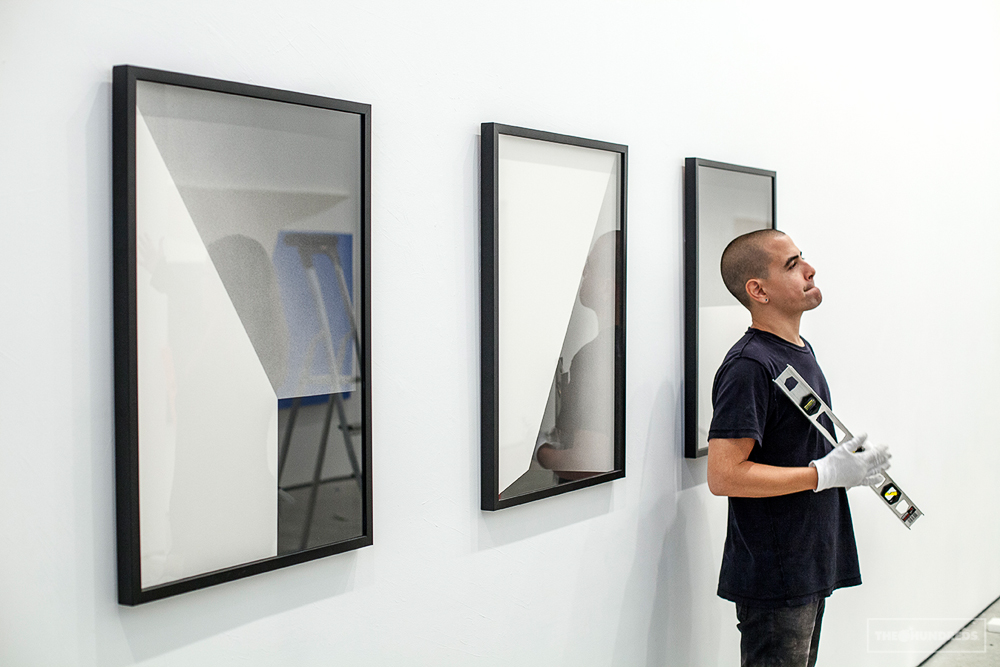 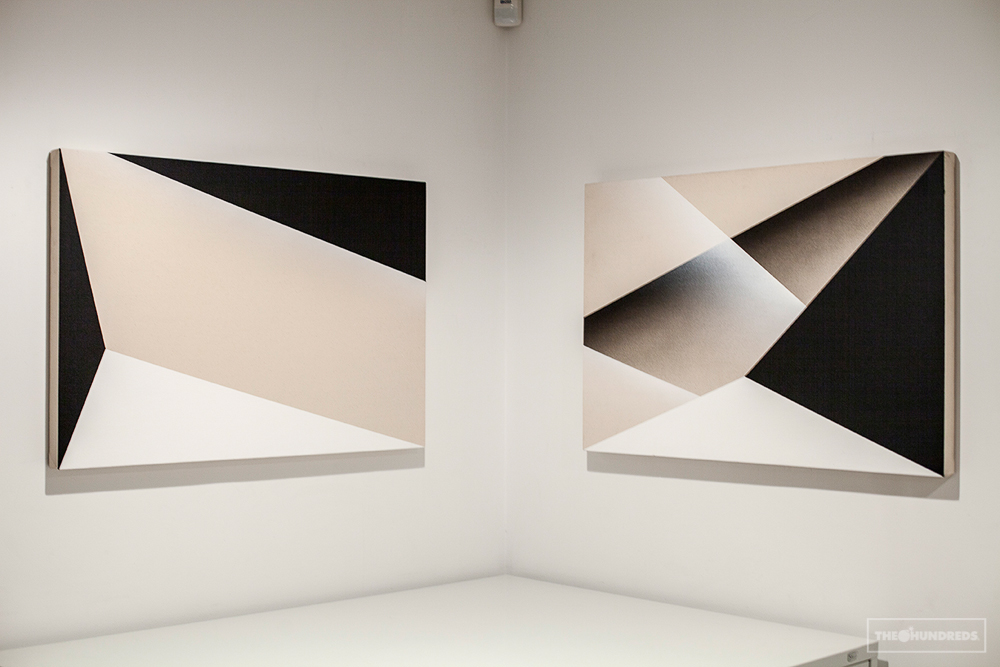 I watched a video about you and your favorite places to grub in LA. What do you like to eat when you’re in New York?

What’s up next for your once the show is over?

I’m heading back to LA and painting a massive mural in Hollywood. I’ve been working consistently on this show for the past seven months so I want to enjoy it and then see what’s up next. 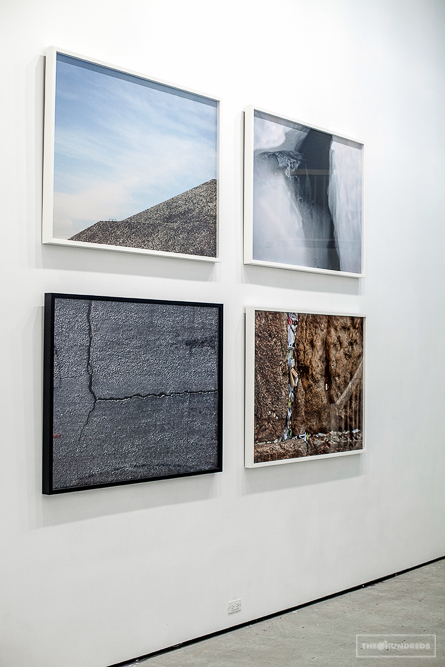 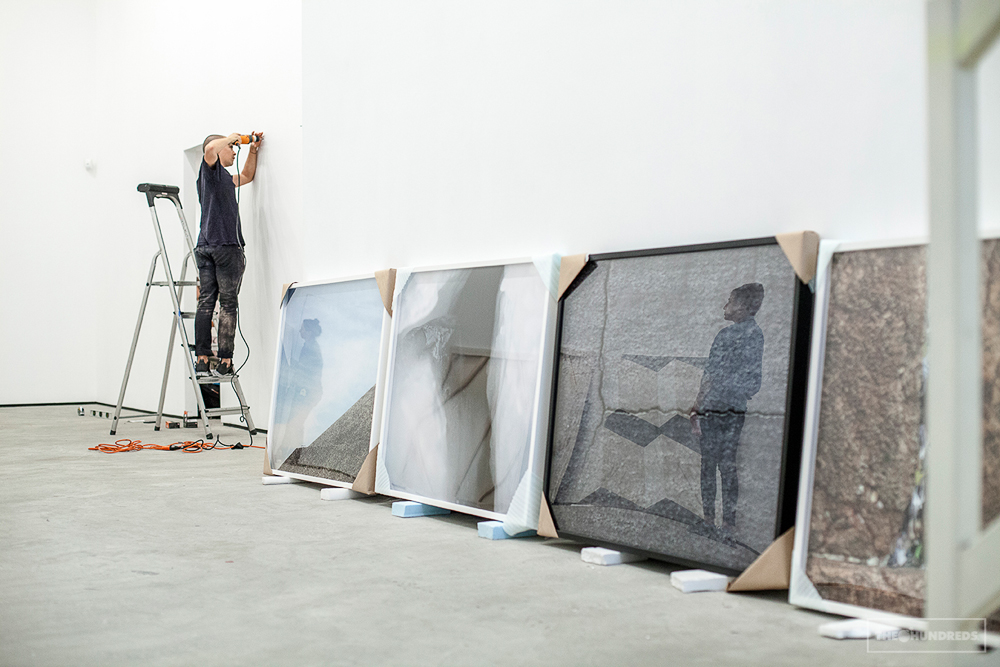 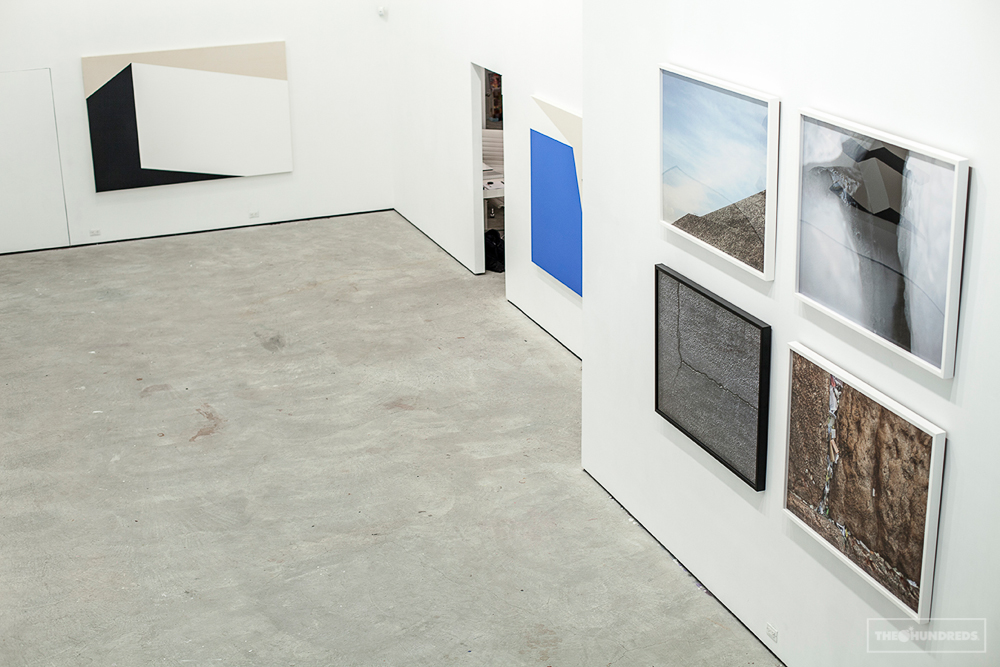