What kind of artist would you consider yourself?

I just think of myself as an artist. My influences are global, spiritual, shamanic, healing, hunting traditions, skateboarding, and street art. I mostly focus on wildlife as my subjects, but I’ll paint anything that moves me. In addition to animals, I love to draw objects such as knives, arrowheads, and candles, and work on typography. I am most interested in the relationship between ourselves as humans and how we interact with the universe, and The Creator. 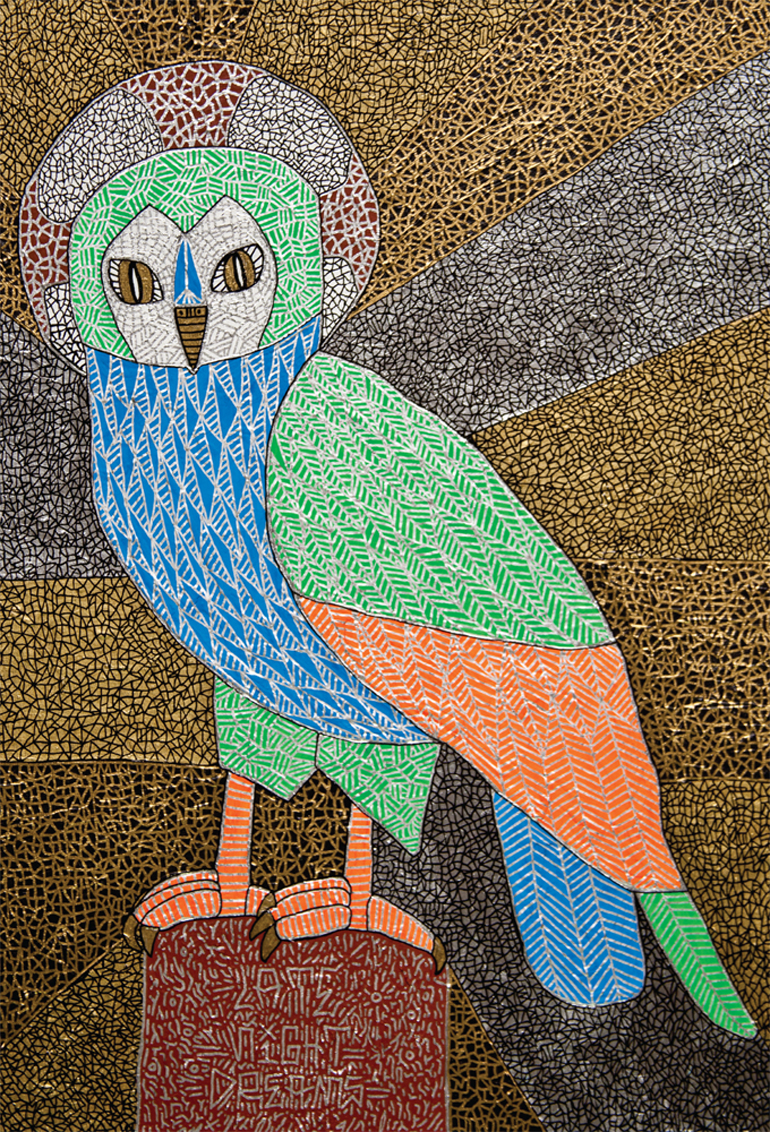 Can you explain your connection with the outdoors and your work?

Ever since childhood I have always been passionate about animals. I love how beautiful they are and how they function on instinct and innate knowledge. I spend time alone and with close friends in the wilderness, make bow drill fires, and sleep under the stars. Drinking out of streams is a treat, and catching my own dinner makes me feel more like my animal inspirations. I have been extremely blessed to receive all kinds of mentoring from people such as Tom Brown, Bill McConnell, and Bernie LeClerc who have initiated me into all kinds of ancient practices including sweat lodges, vision quests, tanning hides, beading, bow building, trapping, and much more.

What have you been working on lately?

I worked on my latest zine all day today, it’s called Muses and Mentors, and it’s about all the women and men who have inspired me over the years – It seriously felt like therapy. Reducing all these relationships into uplifting pictures, making peace with the past, seeing how different woundings have been a catalyst for positive growth— all that good stuff. Healing others and myself through my work is always a goal.

What mediums do you generally use to create your work?

When they asked Basquiat his favorite medium, he said “Extra Large.” That dude is a major inspiration. Spray paint is my all time favorite. The immediacy of it, its unbridled nature is really something to try to harness and create with. It makes me quite happy, though I can be much more precise with pens and markers. Lately I have been into white out pens on bottles and horseshoes. I’ve been recently inspired by Euroe’s work with foam brushes and bucket paint. I also really like to sew with wool and buckskin.

What inspired you to create the pieces shown at your RVCA show, “Slam Dance”?

Honestly, walking around San Francisco, I am most inspired by what I see around me in the streets. I am really enamored by graffiti. I would say that the work in this show was inspired by both the wildlife we have in SF such as coyotes, raccoons, opossums, owls, herons, and hawks; and the work of the graffiti artists I admire such as Nemel, Pez, and Wamps. In my mind, they are both wildlife and embody similar practices such as stealth, cunning, grace, and beauty.

I would say that the work in this show was inspired by both the wildlife we have in SF such as coyotes, raccoons, opossums, owls, herons, and hawks; and the work of the graffiti artists I admire such as Nemel, Pez, and Wamps. 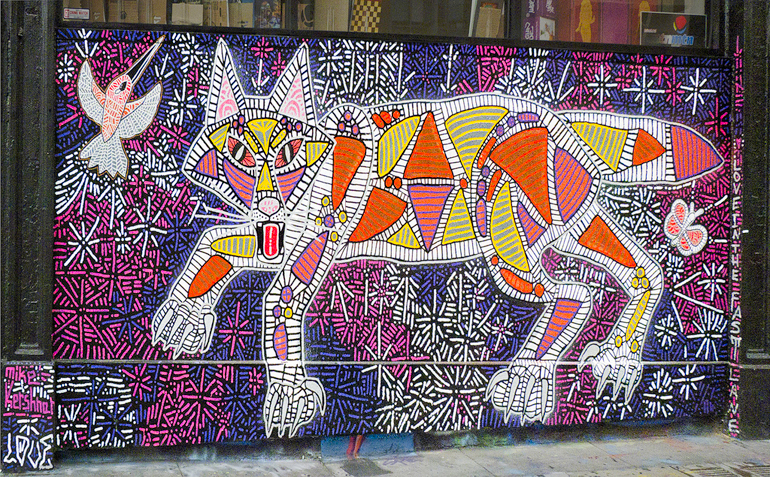 How has living in San Francisco for the past two years influenced your work?

Moving to the city has been an incredible journey. I started off in a pretty deep place of heartache; I found the city to be cold and isolating. The only person I really knew was [Mike] Giant, and he introduced me to Sway, then I met Chert and through them I was able to meet some incredible artists and friends. Before that, I used to walk around by myself all the time and look at all the cool handmade stickers and stuff. I felt like if I met these people we would most likely be friends, but I didn’t think I would ever meet them, they would just be angels of inspiration. Kind of like wild animals, which can be quite elusive and rare to see in nature.

Do the wilderness and the city collide in your world, work, and daily life?

I think so – I love them both so much. If you were to ask me my favorite things to do I would say swimming in a river naked in the wild, or sneaking into an abandoned building to paint. I love to sing ancient chants, and Lil’ Wayne. That’s why I like coyotes so much; they live everywhere, and on the fringe. They are urban and wild, ancient and modern.

On the last skate tour I was on, we were literally chased for a few hundred yards by a huge angry bison. It was one of the most thrilling, and frightening things I have every experienced. I love to connect deeply with forces of nature. 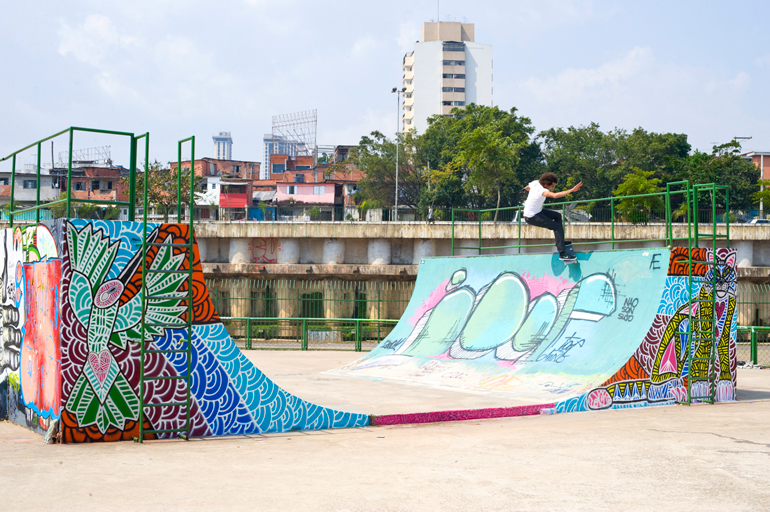 Can you talk about the Element Wilderness camp you participate in every year?

In 2002 I co-founded Element’s non-profit Elemental Awareness. Each summer, Elemental Awareness sends kids to camp where they get to immerse themselves in nature, skate next to a lake, and learn the basics of wilderness survival; such as shelter building, bow drill fires, rock boiling water, coal burning, and food collection. These ancient skills foster a real and lasting connection to the nature world and are a powerful gift to give to our youth. My best friend Todd Larson runs EA now and does a great job, and I go visit each year and sprinkle a bit of my medicine around.

Each summer, Elemental Awareness sends kids to camp where they get to immerse themselves in nature, skate next to a lake, and learn the basics of wilderness survival; such as shelter building, bow drill fires, rock boiling water, coal burning, and food collection.

How does skateboarding tie into your work and lifestyle?

Skateboarding and skateboard culture was the primary influence of my youth. My sense of aesthetics came from 80’s and 90’s skateboard graphics, and my idol was Ed Templeton. He seemed to have it all as a ripping skater, artist, and in a beautiful marriage with his muse Deanna. Many years later, the first art I did in the skate industry was a series Ed asked me to do for Toy Machine, and it felt like there was a huge mystical completion there for me. I love Ed and actually got to introduce him to Giant on his birthday. It was a seminal moment for me. Skateboarding exposed me to graffiti, and an anti authoritarian modality that valued travel, freedom, and adventure, above all else. I love to skate around SF, that simple pleasure was my childhood dream.

What are some of your upcoming projects?

Right now, I’m in the final week of preparation for my solo show at RVCA SF called “Slam Dance” – I’m really excited about it. There is going to be a huge wolf party installation which I think captures my dual muses of wildlife and graffiti, as well as my new zine, a film short, and a bunch of other surprises. After that, this art dealer Muriel is going to have an exposition of my drawings in Paris in April; so steady grinding, sage collecting, and hopefully more travel with Element are in the future. 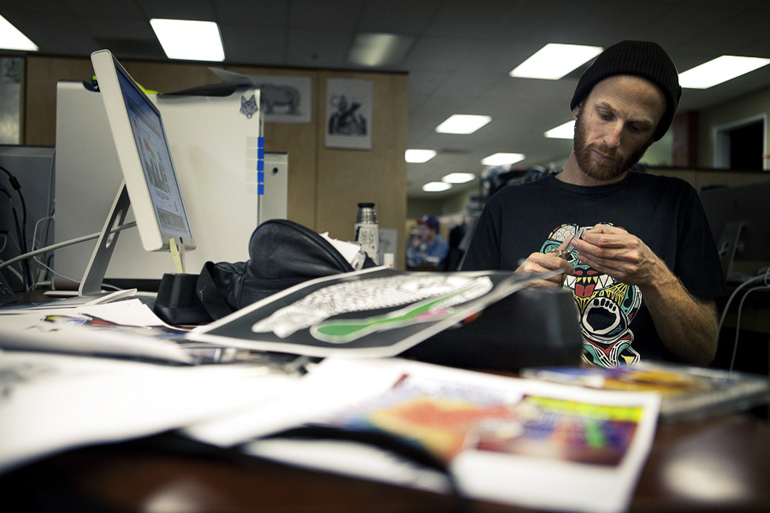