Matt Furie on the Weird & Wonderful

In artist Matt Furie’s book The Night Riders, a frog and a rat go on a nocturnal adventure that takes them through a creepy forest, into an underground cavern and under the sea. Along the way, they eat bugs, meet peculiar creatures, and surf on the backs of pink dolphins. Each page is hand drawn and full of fun and wonder, which are particularly important to Furie. “For me, there is nothing more fun than drawing mutant and anthropomorphic creatures,” Furie explains. “I still like to come up with creatures and characters just purely for the joy of creating them. I am to keep that feeling going—a childhood feeling of escape and wonder—but also add some of my own thoughts and reflections I have gained as an adult.”

In this interview with The Hundreds, Furie offers some of his adult advice—which includes watching David Attenborough—and also talks about his recent move from S.F. to L.A., Mortal Kombat, Chicken McNuggets, The NeverEnding Story, and finding new ways to express himself through his art.

How did you develop your aesthetic? Did you go to art school or were you self-taught?
My aesthetic is a slow evolution that began as a child. It has always been rooted in escapism. I spent long days at grandma’s house drawing fruit vs. vegetable wars with my brother. I grew up with a little brother and two cousins, we were all close in age and each one of us was assigned a Ninja Turtle. We were shape-shifters, animals, warriors, soldiers. I enjoyed drawing the characters I imagined being.

I studied fine art in college and took fundamental classes in painting, figure drawing and sculpture and was into Dali, Ernst, and Picasso as well as contemporary surrealists like H.R. Giger and David Lynch. After college, I moved from Ohio to San Francisco and continued drawing creatures and characters everyday. Old video games, the “natural world” of plants and animals and electronic music are just a fraction of things that influence and inspire my stuff now. I dream about emotional affairs with Black women on spaceships or riding around in the pouch of a marsupial and I hope that that comes out in my art.

How would you describe your aesthetic?
If you look at a video game like Mortal Kombat you see these archetypal characters that reference popular action movies like The Terminator or Robocop. But they are not these dudes exactly. There is something special about a dude with half of his face ripped off. Maybe it’s simply fun to draw. Why do kids, boys mostly, go from drawing animals and sailboats to monsters and demons and people getting ripped apart and tortured? I aim to draw things that look cool to me and are fun to draw. I want a sustainable freelance adult life that struggles to hold onto the joy and wonder of drawing characters as a kid and somehow figure out how to pay rent doing this. 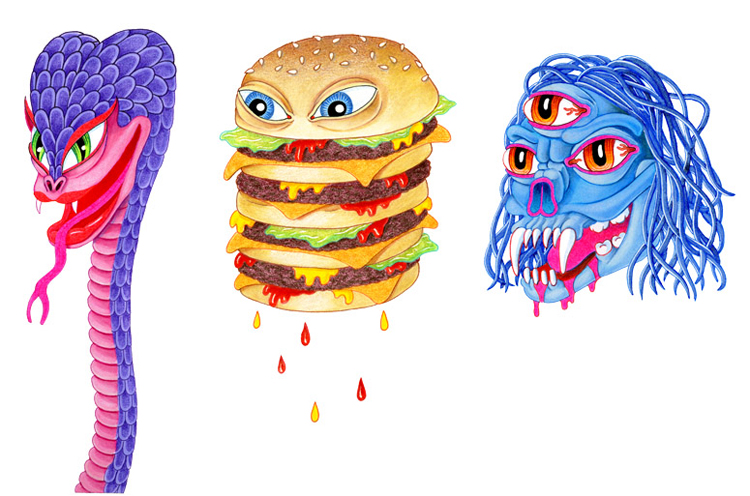 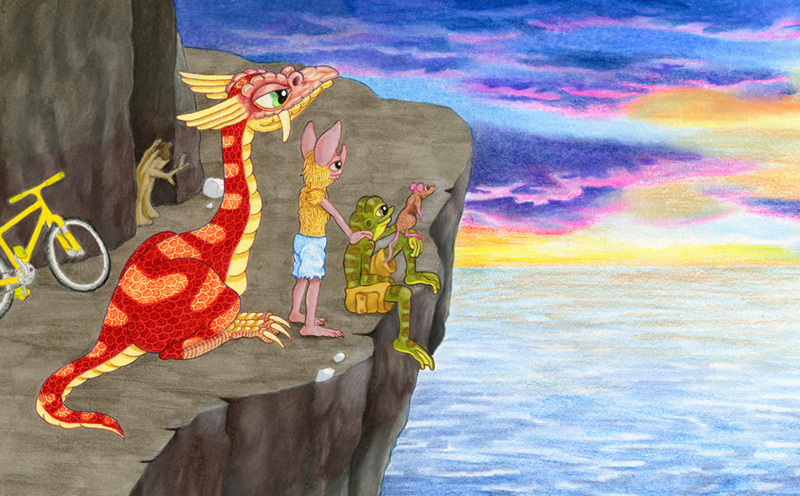 Do you get a lot of daily inspiration from Aiyana [Udesen]? My better half is an artist also and we definitely inspire each other...
Aiyana and I are very yin yang. She has been studying botanical illustration and has taught me a lot of great watercolor techniques. I am able to work larger now without having to switch to acrylic or oil painting. She is a great portrait artist too. We collaborate with our friend Albert Reyes as “Future Colors of America.” Aiyana helps me very much. I’m a fully grown man and I still bring over my finished drawings and show them to her like she’s my grammy. I also show her my work before I ink it in to make sure it looks OK. She tells me when some creature looks too short or if the arms look all right. I’m pretty lucky that she’s just as interested in drawing as I am.

I read that The NeverEnding Story is one of your favorite movies, and it also happens to be one of mine too. What about that movie did you like as a kid and that continues to resonate with you today?
Day-to-day life in this world is pretty shitty. Get fat, get angry, go to work, eat a sandwich. I want to ride around on the back of a dragon and scream my fucking face off. I’ll never do that. I guess I could figure out how to bareback ride a horse and have a weapon in my hand and scream my face off. I have a friend that has a lot more spare time now that he’s been sober and he has a bunch of mannequin heads leftover from going to salon school. He plans on drilling a hole in the heads and filling them with fake blood and shooting them. It would be just as fun to set them up along a horse trail and bludgeon them with a mace as I rode by screaming like an idiot. I’ll probably never do that but if I did it would be one of those days that I would remember. 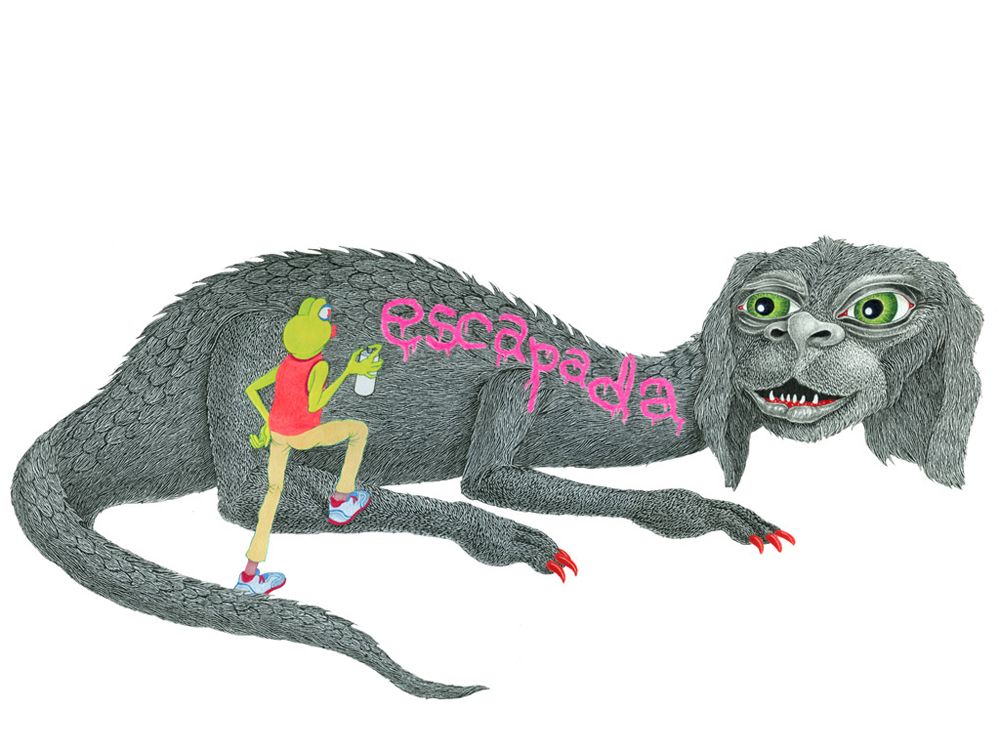 You spent a decade in S.F. but now live in L.A. What inspired the move? Has L.A. had an impact on your art or characters?
It’s a beautiful summer day every single day. In S.F. it’s way colder and way more liberal/intellectual. L.A. is weird and fun but there are way too many ads and fake tits and cars. People drive like assholes so that has taken me some time to get used to. But I love it. I ride my bike from Koreatown to Venice beach and I people-watch and play on the monkey rings and jump in the water. I usually get an oil stain on my leg or foot when I get out of the water but it’s worth it. Nothing beats a hangover like jumping in the ocean. I love bodysurfing like a dolphin and I’m really looking forward to beach season this year. It’s possible that its influencing me but who knows?

I love your book Night Riders, which I bought even though I don’t have a kid. What made you want to make this book? Did you think of the story first or did you sit down and try to think of one because you wanted to make a book?
The publisher asked me if I was interested and we took it from there—there are no words in the book so I came up with the basic structure and laid it out in thumbnail storyboard notecards. I have pet rats and I love riding my bike so it’s just a little adventure that is strung together with a series of events and environments that I thought would be fun to draw. The forest, a ghost town, an underground cavern, the ocean, and so on. It takes place at night, which lends itself to mystery and adventure. The night is a time when the ghosts and aliens show up. 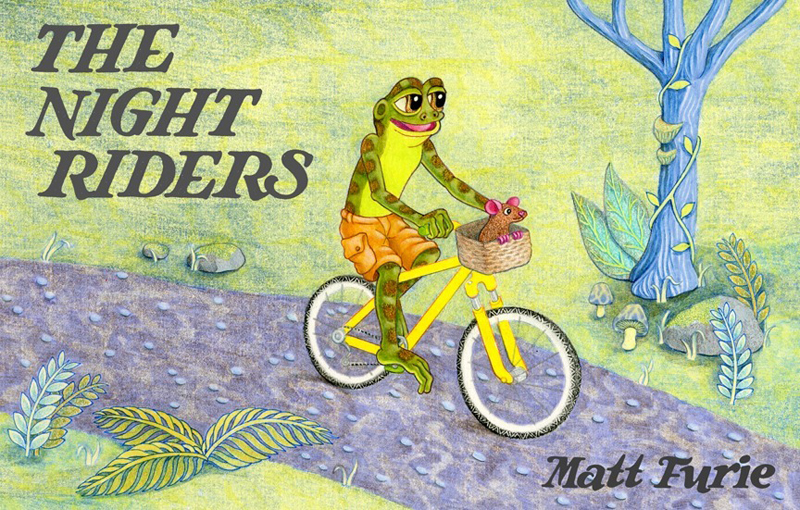 What are you working on now?
I want to find new ways of doing character crowd scenes. It’s the most fun way to draw, just unleash a hundred different dudes and put them all together. I just finished a large painting of a downward spiral of sad/angry Chicken McNuggets. It is sort of reminiscent of this scene I saw in a movie where a swirl of baby chicks slide into the spinning jaws of an industrial food deathtrap. I also want to find ways to express the two sides of my thinking—blissful positivity and cosmic wonder with utter nihilism and frustration with ecology and the future of man. So I want to do a large artwork that expresses a beautiful garden of the mind as above with torture and pain being inflicted on Miss Piggies and other creatures from below in the catacombs.

Best piece of advice?
Just get some shit day job and work on your craft at night/on weekends until you can wean yourself off of the day job or at least work less. Don’t have a kid. Watch David Attenborough. Turn off your phone or computer after you read this and draw a few drooling skulls.

Keep up with Matt Furie’s latest on his website and Tumblr at mattfurie.tumblr.com. You can grab a copy of his book The Night Riders here.