When you walk into Mariella Angela’s home studio, you’re greeted with smiles. Sure, the 21-year-old painter from Norwalk, California naturally has a cheerful disposition, but the smiles come from all angles and from different sources.

That’s because Mariella keeps some of her celebrated paintings lined on a wall, and each of her hip-hop portraits is filled with emotion. There’s a Kendrick Lamar piece, for instance, that’s beaming with joy and optimism, smiling at whoever walks in.

After our recent interview with the young self-taught artist, we asked Mariella to talk about her top 5 favorite pieces of all time. Here’s what she shared. 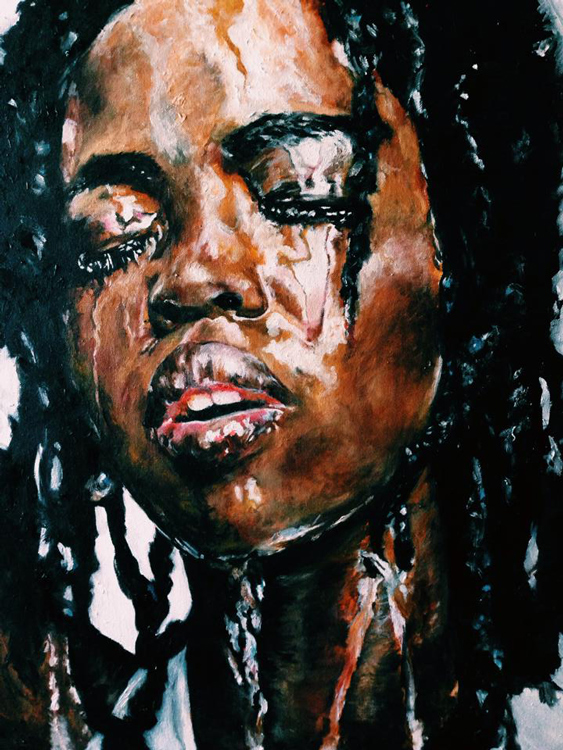 “I was looking at Lauryn Hill pictures and there were a lot of easy ones I could’ve done, but then I saw that picture with the water going down and it caught my eye. I was like, ‘Crap.’ I have this thing where if I see a picture and it makes me double take, then I have to do it. It caught my attention. There was a reason I had to scroll back up. That one, I couldn’t stop looking at it and I was like, ‘I can’t do this, but I have to do it, but I don’t know how.’ When I ended up doing it, I don’t even know how I went from point A and then all of a sudden I skipped all these steps when I did that Lauryn painting. I was like, ‘How did I get from here to here?’ It didn’t make sense, but when I was painting it, I always had it in mind where I was like, ‘This has to be good. I’m giving this to Michelle [Vo] and I can’t give her a half-assed painting because she’s inspired me so much.

“I’M ONLY GONNA PAINT THINGS THAT MEAN SOMETHING TO ME.”

First, it was bomb. I was so proud of myself. It was a milestone for me. Second, it meant a lot because I was able to give Michelle something, a token of my appreciation. Three, that was the first time I realized that what makes a good painting is the emotion behind it. There’s a lot of people with talent and they’re able to do it with skill, but if there’s no passion and emotion in it, then it’s gonna feel empty. After that painting, I told myself, ‘I’m not gonna paint a painting because it’s hype. I’m not gonna paint it because I know I’m gonna bump into an artist and they’re gonna post it. I’m only gonna paint things that mean something to me.’” 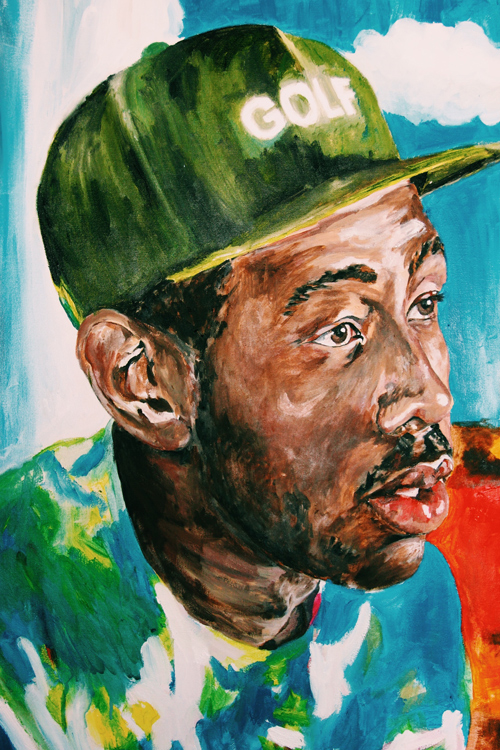 “Before this, all my paintings were small. I told myself I had to challenge myself. I was like, ‘I can’t do something that big. That’s too much.’ But with this one, I had to challenge myself, and of course I had to bring it back to my roots and do Tyler. This was kind of one of those milestone paintings. I didn’t know how to paint ears and I didn’t know how to paint lips well. I think it was just a milestone. This was the first one.

For the longest time, I wanted to paint hyper-realistically. I told myself that was the end goal. I had to paint good enough to where it looked like a photograph. This was the first painting where I was like, ‘No. The brushstrokes are dope. This is my style.’

At this time, all my paintings were like $80. Someone told me, ‘Can I buy that for $200?’ I was like, ‘No.’ I had a show last October and this store owner was like, ‘I really want that painting. I’ll pay you $1,000 for it.’ I think about it now and I didn’t even consider it. There’s no question. This painting is a milestone for me. I feel like one day, if ever I’m not painting, I’m gonna look back at this like, ‘This is where it started.’” 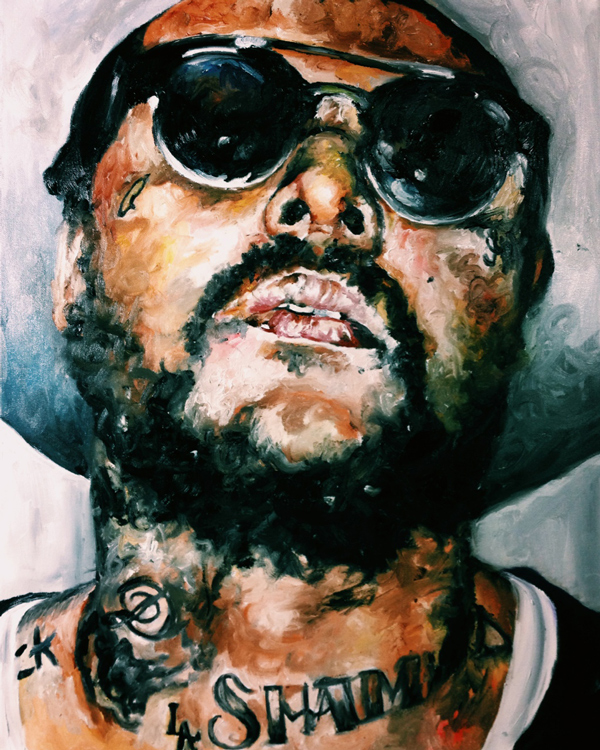 “All my paintings have a weird emotional attachment. I painted this one 2014 on Thanksgiving. Thanksgiving for my family is pretty chill. We just eat, talk, then we’ll go to a movie, take a nap, and go Black Friday shopping. I wasn’t planning on painting anything that day. I was like, ‘This is a holiday. Let me just chill.’ But no. Thanksgiving hit and I was like, ‘I have to paint.’

I was thankful and I got really emotional. It felt like a blessing that one, I found my passion, and two, I was able to do it. At this time, I wasn’t making much money, but it was a blessing that I was able to pursue my passion. Let’s be real. A lot of people don’t even know their passion and if they know it, some people can’t pursue their passion. I felt really blessed and it was Thanksgiving. I had to paint. At that time, I would put my iTunes on shuffle and whatever came up is who I would paint. [The song ‘Blessed’] came up. I was already in my feelings and I was like, ‘True! Stay blessed.’ So, I painted that.” 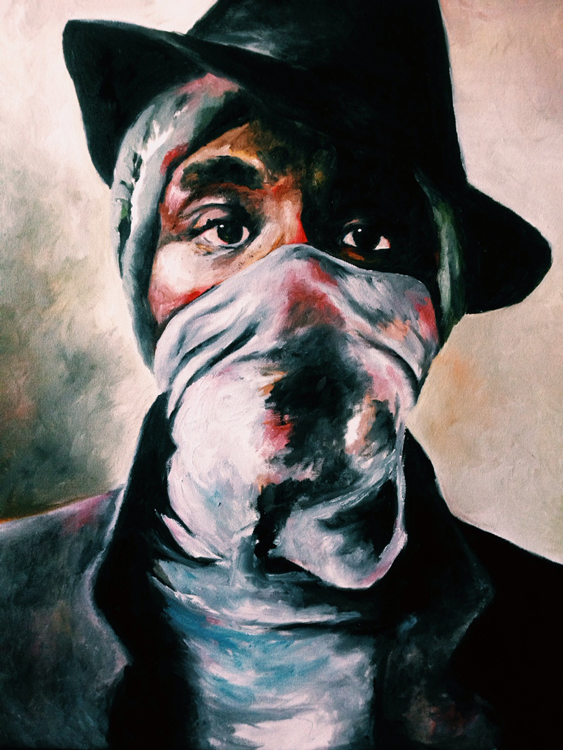 “It was probably my second commission. At the time, my paintings were $200 and it was a big deal. I was like, ‘Oh my god. Someone wants to buy my painting.’ This older lady from Boston asked me about it. I had two pictures I was gonna do [of Mos Def]. It was that one and one where he has his finger [up to his head]. She wrote, ‘I want the one without the hand.’ I read it as ‘I want the one with the hand.’ So, I was like, ‘Okay, I can do that.’

“Then she wrote me this thing like, ‘You need to start valuing yourself more as an artist. Your work is so great and maybe you don’t see it now. This isn’t for pleasure. This is an investment.’ I didn’t know her. I knew she was an older woman but she was a total stranger. For her to go out of her way and say, ‘This is an investment because I know you’re gonna make it somewhere and this is gonna be up at my house and I’m gonna tell my grandchildren...’ It meant a lot to me.” 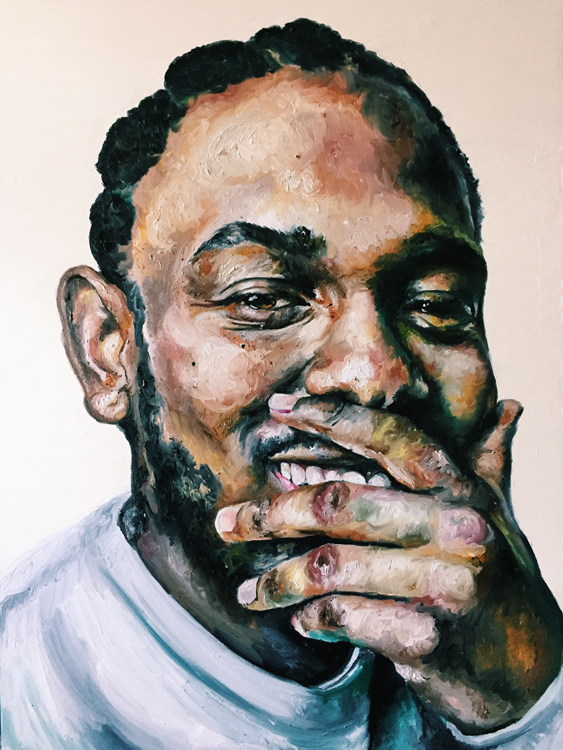 “It just makes me feel happy. I’m so proud of everything he’s doing. I painted this maybe three weeks ago. The paint is still wet. The year just started and things just feel so bright. The emotion that it gave me, it made me feel like, this year, something big is gonna happen, something life-changing. I don’t know what it is but I feel like it’s coming. That’s the kind of mindset I wanted to go into this year and I think that picture made me feel like the future’s bright, like something’s gonna happen.” Andres Tardio
Self-taught artist Mariella Angela has been painting evocative, realistic portraits of her favorite hip-hop icons ever since she first painted Tyler, the Creator in a goblin mask as a birthday gift... Check out the Smithsonian's Massive Collection of Rare Hip-Hop Photos

The Hundreds Staff
The Smithsonian just acquired a collection of photos featuring the likes of hip-hop titans like Jay Z, Grandmaster Flash, Queen Latifah, and Eazy-E as they built their legacy, long before the major... Maarten Warning
Dutch artist/illustrator and notorious sneakerhead Kwills sketches his top 10 favorite sneakers of all time, including some eclectic choices from Gourmet to Nike to éS.