I started my Fourth of July with a tiny bottle of white wine in a scarcely filled theater of folks to see Magic Mike XXL because I know no better way to show my patriotism. Fair warning, though, my account definitely contains spoilers. I’ll start with this one: the classic plot of having a plot is replaced by gratuitous footage of muscly men gyrating.

I saw the first Magic Mike in Portland in part of two friends’ wedding celebrations. We took GBH, too, while watching, so I instantly felt camaraderie with the film’s characters, even when they admittedly tried too hard to hold straight faces. I maybe identified with them most strongly during these moments.

The follow-up, however, really embraces its identity for what it is: a fun audio/visual experience best enjoyed with other people. (I cannot imagine watching this film alone. It sounds like visiting Disney World solo which, to be fair, might prove to be an absolute riot. I’ll make a note to investigate and let y’all know how it goes because we already know dining out alone rules.) Magic Mike XXL follows a reunion of stripper pals after a three year hiatus on their journey to the annual Stripper Conference, which is the actual name as presented on the sign for it in a rather lengthy close-up/pull-back combo shot (listen, I’m no videographer – but that description should be good enough for you to have a mental picture). This shot alone describes the whole movie’s vibes: Straight-up.

There’s a bit of weirdness when Mike decides to rejoin his cronies on the road to Myrtle Beach, which is where the conference is located. Obviously. You see, not much has changed in the stripping community since Mike split to kickstart his own furniture building business and he’s having problems remembering he’s here to ~hang~ not TALK ON THE PHONE LIKE A BUSINESS OWNER WHO AIMS TO KEEP BUSINESS AFLOAT, ew. Although I’d never want a similar fate, I appreciate when the dudes throw Mike’s cell phone from their yogurt-bar-bus as it soars down the highway. This also helps make the entire film more believable, since otherwise when the crew took molly, they’d all surely be hazy and scrolling through Instagram awarding free likes to their entire feed. That just wouldn’t make for a great movie. But before we know it, the guy who offers to “collect the non-biodegradables” after their beach party caves and decides Mike is still chill. Buddy vibes ensue for the rest of the film.

Although this instance happens during one of my favorite scenes, it loses points for lack of creativity. Water? Instead of…? No. However, we can’t fully discount the lack of alternatives available during this moment. “Big Dick Richie,” played by Joe Manganiello, took Mike’s dare to dazzle a bored female convenience store clerk while rolling his face off. As he entered the shop, Backstreet Boys plays overhead, inspiring BDR to freestyle an elaborate, intoxicating dance. And yes, he did get the clerk to smile and me to reconsider my previous dating plan involving only anemic-looking men or those with a body type akin to The Grinch. I kinda definitely wanted to bang BDR halfway through this scene. Sadly, though, the water simply wasn’t enough so that’s why it’s ranked the worst.

Tito, owner of the yogurt mobile and big-time dreamer of ice-creamer, sprays women with whipped cream during his grand finale solo number. I know some people are into freaky, sticky shit like that, but I am not one of them. Watching it happen gave me anxiety.

BDR also came Cheetos in the convenience store scene. Cheetos, of course, score higher than water as they are not only a more artistic choice, but also more delicious. If Cheetos were actually a legit IRL outcome, my life might be very different.

The crew rolls through Jacksonville, Florida, en route to Myrtle Beach from Tampa and deems the hellhole perfect for a pitstop. (I’m allowed to say that because I went to college there and it was a very weird experience.) They hang around a drag show – which I actually love. I know lots of straight girls who’d hit up a drag show for the hell of it, but not many straight guys. It’s inspiring and I hope the scene inspires more straight men to live their best lives by attending drag shows with other straight men. Anyway, there’s a queen contest and Tobias, the group DJ – who later in the film everyone forgets about in a hospital for kinda longer than could be considered cool – competes. He wins, and to celebrate, jizzes pieces of whole fruit into the crowd. Everyone cheers because health and vitamin C are important.

Tarzan, the mostly quiet, totally huge dude about whom everyone else seems to know little (and is played by KEVIN NASH), also has a new routine. One that involves him splooging glitter. The rest of the routine is less important. Glitter is a celebration, clearly – and a good one at that – earning it second place in this scientific ranking system. 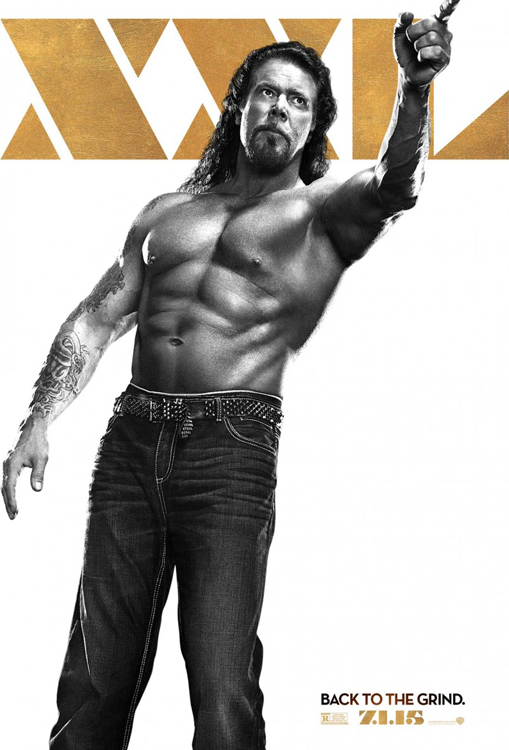 Mike does this one! Early on in the movie, we find Mike faking classic Nice Guy. He pretends to be compassionate and lets his sole employee head home early. Mike’s secret is revealed shortly after: he wanted to practice kicking walls and humping tables in private. Who can blame him? Ginuwine’s “Pony” on the radio triggers the compulsion to which Mike succumbs and flips all over his carpentry lab. During his acrobatics, he climaxes sparks with a drill thing. Please recall, sparks are really just smaller pieces of actual fire. FIRE. This instance is the inarguable winner.

Sure, sure. There’s a lot of great and meaningful moments and themes in Magic Mike XXL. Jada Pinkett Smith runs a stripper castle with Hollister store lighting in a Savannah jungle – which is nice. Donald Glover is hot in his minor role, thus quietly entering my own mental spank bank. XXL‘s writers made the refreshing decision to leave romance out of the film’s core, instead only alluding to Mike’s attraction to that girl who may or may not be 19 but definitely loves eating cake by the plate. The scene in which the men sit around listening to slightly older women (real talk: most of the guys must be 43 and I don’t want to hear otherwise) talk – just talk – was revolutionary (women like when you listen! Fucking madness truth bomb). There’s so much to love in this film and I wholly recommend everyone see it regardless of gender identity or sexual preference.

But the ejaculate thing. Rob Fee
Look, everyone should just admit they love professional wrestling, and here's why it's perfectly fine to feel that way. Bobby Hundreds
I fell deep down a YouTube K-hole yesterday while researching for this piece, and when I came up for air, I realized I was practically watching the entirety of Menace II Society, which is arguably ... Todd Knaak
Todd, Editorial Assistant and resident film geek at The Hundreds, lets us know exactly what to do on this first hump day of 2015. Yes, it's Wednesday night, 2015, babies, and we're gonna watch fuck...
HIDE COMMENTS