First of all, explain why the magazine is called Soggybones.

Well some of our mates like to joke, Soggybones is a rancid reference to sex. I like to think we are a little bit more sophisticated than that, but who knows? Soggybones is a celebration of doing what you love the most in life. For us and our readers, that’s pretty much surfing and skateboarding with mates. Everyday we’re saturating ourselves in the surf/skate subcultures because they all rip and go perfectly hand in hand.

Our slogan “Soggybones don’t break” basically means when you’re out doing what you love, you’re going to be feeling pretty fucking great. Sometimes at that stage you feel unbreakable.

My brother and I surf as much as possible and when we’re out there getting waves our bones are getting satched! It’s a play on that you know. Life’s short so why not saturate your lives doing stuff that makes you feel good. Stay Soggy and enjoy your life. 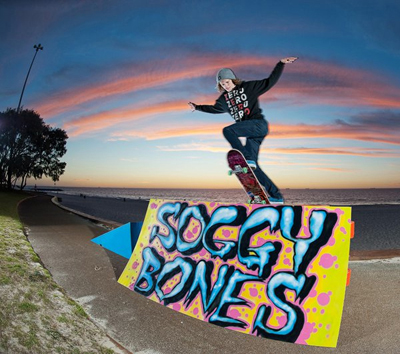 What made you want to start the magazine?

I guess there are a few legit answers to that question, but this is basically the birth of Soggybones in a nutshell. After finishing university I was stuck in a rut. My parents wanted me in the workforce, but I had no practical experience in Journalism and Public Relations. All I wanted to do was write for a surfing magazine. I got some work published, but I wasn’t earning anything substantial or landing enough freelance work to keep me going.

I was chasing a full-time journalism gig, but I had next to no chance of making that a reality because I didn’t have experience in the field. So I basically spent one or two years surfing around Perth, working odd jobs here and there and spending all of my weekly pay cheques going out and partying. I was going backwards and my repetitive and pretty unhealthy lifestyle was starting to grow old and get the better of me.

The whole time that was going on I didn’t give up on my hopes of writing for a surf or skate mag. I kept applying to magazines and I kept receiving rejection calls from various editors. After a while I thought “what the fuck is wrong with this media industry?” Nothing made sense to me at all. Editors kept saying “come back when you have a few years industry experience”, but no one was willing to give me a go. I was down to write for whoever, but there were literally no jobs. So I was left wondering how I’m going to build experience as a writer when I couldn’t find any proper opportunities? So I went home and started brainstorming.

I wanted to write, and all I cared about was surfing and skateboarding, so I thought, “why don’t I just start my own surf and skate magazine?” I figured that way I could build my own experiences.

I made a conscious decision the magazine was going to provide young creatives with opportunities to build practical experience. I wanted to build a platform for young people to display their work so that they had a better chance of finding work after university life. At the same time I also wanted to create a unique mag that people would admire and go “wow, these young fucks have made a mag that is as good, if not better than the magazines that are currently on the market and run by “old, experienced, office jockeys!” The magazine industry in Australia was dying and I noticed an opportunity for us to inject new blood and ideas, so we did. 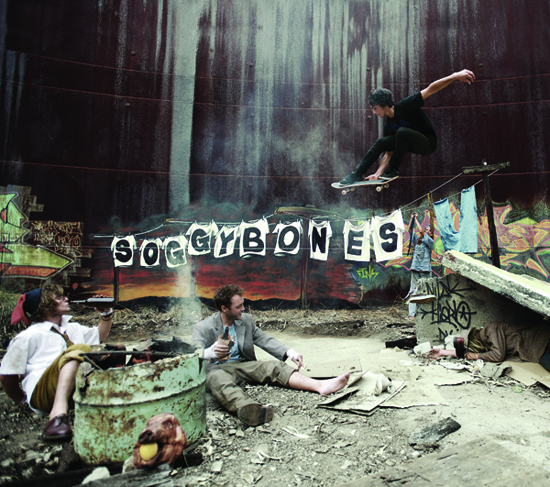 Once I had most of the ideas mapped out on paper or in my head, I shared the magazine idea with my brother and he was super down to help make it happen. At the time he was studying the business of publishing and I knew that he had good communication and people skills, so we joined forces and got to work on making Soggybones. We set a timeline, had weekly meetings and just worked hard.

During the developmental stage of this magazine idea I noticed an online store manager job available at Star Surf+Skate, a local surf and skate retailer. So I applied and ended up landing the job. It definitely wasn’t a high paying job and their wasn’t much satisfaction, but I was meeting a lot of people and every night after work I would go home and work on building the business plan behind the magazine. Luke was also working at Star, so everyday at work we met new people and added them to our contact list knowing they could come in handy somewhere down the track.

One year later I moved to a small coastal town called Yallingup. I lived on a farm property with my girlfriend and a few mates. That gave me the best location to escape the real world and focus on the mag. It was such a beautiful location and that provided me with a huge amount of inspiration.

I started surfing a lot during my time in Yallingup and I also met Russell Ord, a local surf photographer. On a trip for Australia’s Surfing Life magazine I told Russell about the magazine idea, and he was really keen to get involved. Russell is now our photo-editor and one of our senior photographers. Russ has basically been with us from the start of the project and he’s become a key player in Soggybones. We’re super thankful to have such a talented photographer on board. He’s helped us in a huge way and he’s a great guy. 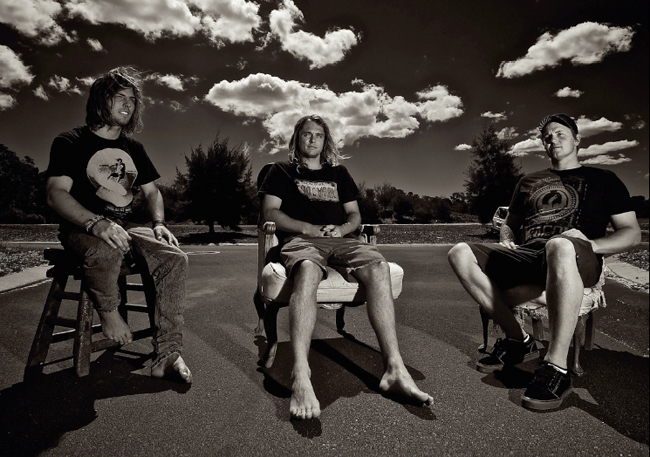 Another significant step in making the magazine a reality stemmed from a good friend of mine, Merlyn Moon. Merlyn is a super creative individual and one of the most talented film directors I know. Luke (my brother) and I asked Merlyn to join the team and together we started piecing ideas and turning them into something tangible. Merlyn created our logo, colour schemes, provided his ideas/in-put and put us in contact with Rory Nelson, our current graphic designer. Unfortunately Soggybones was consuming too much of Merlyn’s time and it was distracting him from his film making goals, so he said he just didn’t have enough time to dedicate to the mag. We were sad to see such a switched on guy bail, but we understood and were just thankful for his early input.

Do you have investors or is it self-funded?

Dude we are flat broke. Soggybones is purely funded by us. We work other jobs full-time and after hours is when we focus on the mag.

Is the magazine strictly online? And if so, do you see it eventually going to print?

We started off strictly with a vision for Soggybones to be an online magazine, but Limited Edition print copies are already available. We just released our second print magazine.

Dropping our product initially online had so many advantages. Firstly we had never done anything like this before, making a magazine, running a business, managing people, marketing and promoting a mag was a completely new world to all of us. So starting off online meant that we could test the water without spending huge bucks. We saved a lot of money starting off online, plus it’s a win for the environment.

We’ve had to learn a lot super quick and it has been pretty full on, but we’re still hanging on, it’s a pretty wild ride. Soggybones “All Sorts” our second print edition is now in stores.

Russell Pope did that one. Such a talented artist and interesting dude. Everyone loved that cover, so props to Russ for showing us love.

Russ Pope is one of the raddest dudes.

Yeah for sure, Russ is a great bloke and he rips! We first met him when we was handling Fallen Footwear’s marketing and art direction. Russ has been so good to us at SB. You know just one of the guys who has supported us since day one. The skate industry is full of great characters and Russell would have to be up there with one of the best! 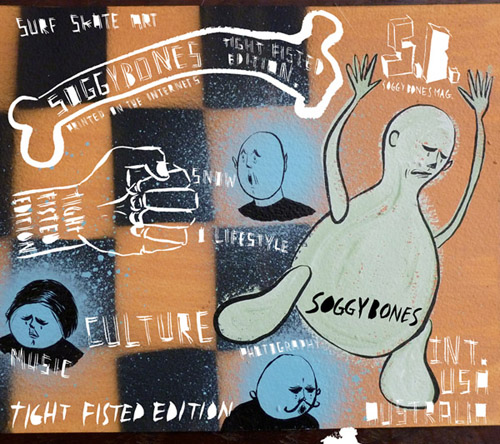 Is there a brick and mortar office or is everything done remotely?

Nah, we don’t have a Soggybones office where everyone gets busy. Luke, Russell, Rory and myself all work from home, but we hold pretty regular meetings to make sure things stay on track.

All of the other people who make SB happen are scattered around the globe. The internet is amazing.

Who are some people fromyour land that we should know about?

I think you just opened up a fat can of worms but I can’t really narrow it down to a few people. There are just too many talented people over here to name a few. Thanks to everyone who has supported the mag and major props to the haters. We love you.