How did you start Focus Magazine?

!With a lot of hard work and networking. Once we finally came up with a name we split time on our single computer emailing and calling everyone we knew to try and see if we could get some advertising support. Being a free magazine, ad support is the life-blood of our creation and Focus would have never been possible with out the faith of our advertisers. I have to give my partner Mazur the most credit for making this happen. Being a photographer and the former editor of another skateboarding magazine, he had made a lot of good friends and contacts, who of which were able to help us launch Focus. 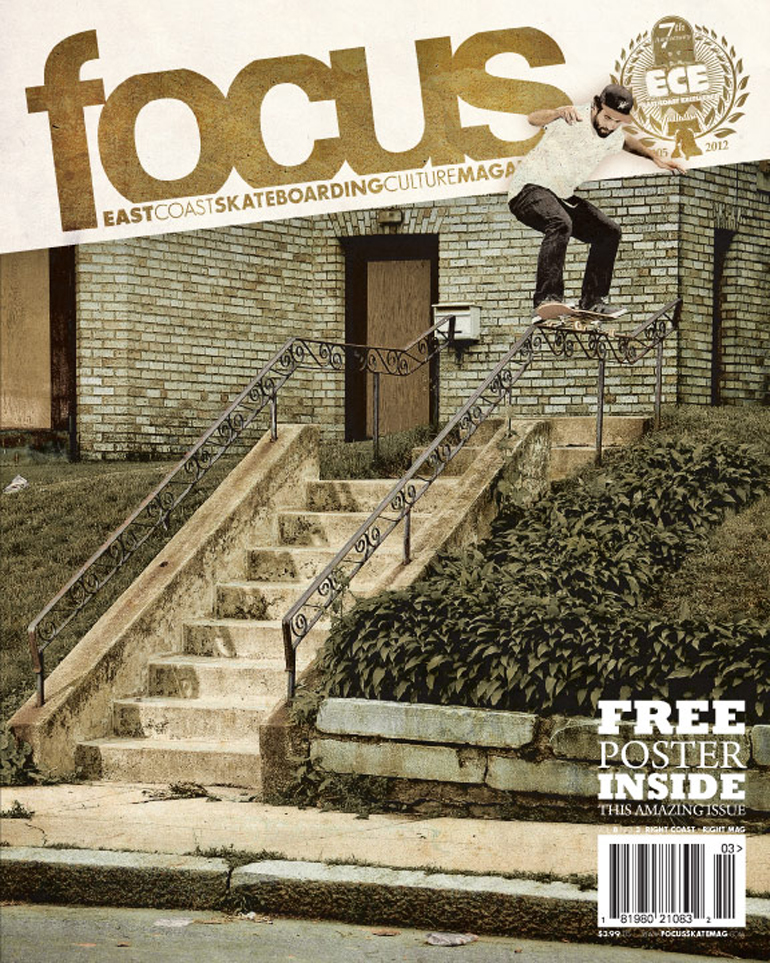 Raw and real. And huge thank you goes out to all of our contributing photographers and writers who help supply us with the awesome content you get to see month after month. These guys are the best!

What inspired you to create Focus?

My partner Mazur and I used to work together at another (now defunct) skate magazine in Jersey called Resolve. It was an awesome experience working there, and some of the best times in my life took place with those dudes during my tenure there. After both Mazur and I left Resolve, we were broke, jobless, and knew we wanted to continue having the good times working with what we loved to do. We figured we learned enough of what to do as well as what not to do at that place that we could be successful if we started our magazine. A need of money for food and shelter was a hell of an inspiration to get the ball rolling on Focus!

What does your job as art director entail?

To be completely honest, “art director” is an understated title. But as you can imagine, it entails everything art-related with the magazine! from the layout and design of each issue, to designing all the promotional and collateral pieces, deigning stickers, t-shirts and so on. I also get to work with other artists on projects from time to time, which is really cool when it happens.

However, even though my core role at Focus is art related, my role as co-owner extends to include responsibilities such as ad sales, bookkeeping, distribution fulfillment, and many other not so glamorous roles that go on behind the scenes.

There is something about holding a magazine, seeing and holding a printed photo & article in your hand, that is much more powerful and meaningful than any digital format we have today.

When you’re not working at Focus, what are you doing?

Aside from my love of skating, I really enjoy fighting. Not physically assaulting people, but watching MMA and training. I’ve been training Muay Thia intensly for roughly the last three and a half years. If I’m not skating or training I’m schemin’ on how to become a real estate mogul. 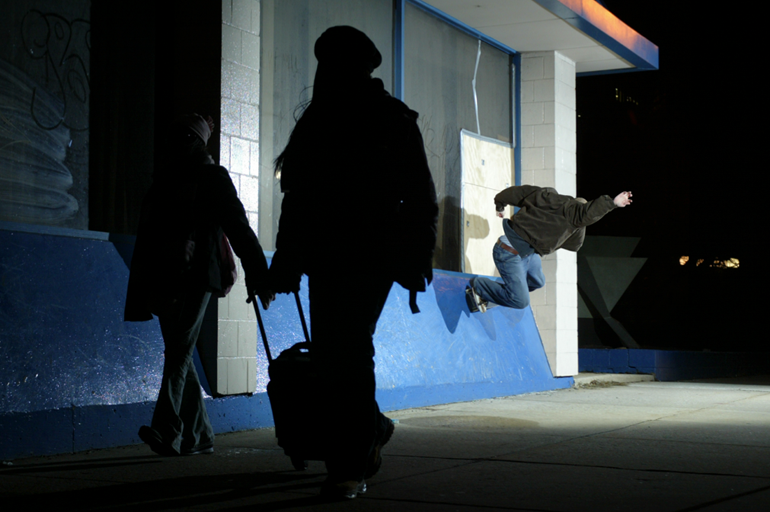 What are your thoughts on the print industry in general?

I think that the print industry, in general, is on a decline (from a business/financial perspective). Do I think it will die? No, I don’t think it will ever completely die, at least not in this lifetime. But the playing field has changed. Technology has advanced so much and so quickly in the last few years it has shaken up the print world. And it’s only going to advance more, and even more quickly, moving forward. This is something we embrace though. We are small enough to roll with the punches and adapt as new technologies become available. Being a small company, we can change how we go about doing something overnight or incorporate new strategies immediately. All that being said, I do believe that print still plays in integral part in our industry and is very important and valuable tool for advertisers. There is something about holding a magazine, seeing and holding a printed photo & article in your hand, that is much more powerful and meaningful than any digital format we have today. Plus when you’re out of TP, it’s both uncomfortable and expensive to wipe with your iPad.

What do you love most about skateboarding?

There is so much to love. I love how it brings people and friends together, the good times, laughter, and ridiculous situations it creates, the freedom of being in your own world focusing on the immediate task/trick at hand. I love how you can just cruise carefree and how that clears your mind about any troubles you might have in your day. There really is so much to love, it would be easier to just list the few things I dislike: Eating shit from hitting a random pebble, power-tripping cops, shitty city drivers and how unbelievably sore my stupid left knee gets these days.

What’s the difference between East and West coast Skateboarding?

For the most part, to me anyway, it’s more the same than different. I think there is a bit of difference in style due to the condition of spots and how they are approached. But a side from that, I’d say the biggest difference might be the attitude and work ethic.

I think East Coast skaters in general have a harder work ethic. Before anyone starts hating, hear me out. The East Coast was settled first and a lot of it’s major metropolitan areas are old. A lot of this old architecture looks great for skating, but being old, it is pretty crusty. Couple that with the short time we have to skate due to the harsh winters and blazing summers and the impact that has on making spots even crustier, you have to have one hell of a work ethic if you want to make it in skating and staying on the East Coast. I mean this as no disrespect to any of my friends out west! I’m just saying we have half a year to cram a year’s worth of street skating in. That makes us motivated, hard workers.

I love how it [skateboarding] brings people and friends together, the good times, laughter, and ridiculous situations it creates, the freedom of being in your own world focusing on the immediate task/trick at hand. 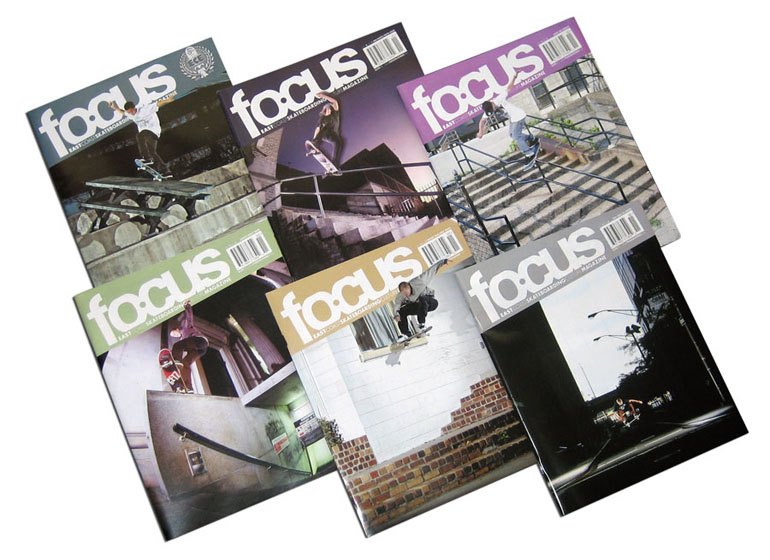 What do you think Focus Magazine represents about East Coast skating that was never repped before?

If I had to pick one thing that would have to be the skaters themselves! the huge talent pool and exposure we are able to give to all the guys that have been under or off the radar for far too long. There are so many awesome guys out here that as talented as they are, would get little to no play in any publications if we weren’t here doing our thing.

With the skate industry based out of California, the majority of the coverage in all the magazines is/was West Coast heavy. Which is fine, there are tons of spots and tons of dudes that absolutely kill it and deserve all the coverage. And sure, there are articles here and there about the East Coast skate scene, but nothing to showcase the giant talent pool over here. I mean you can only fit so many photos in an eight page article.

Being able to dedicate an entire magazine to covering guys coming up that you wouldn’t hear of for a couple years is an awesome feeling, and we’re proud to rep that.

Any advice for people looking to start their own magazine?

Yeah, good luck! I’m just playin’. My biggest piece/pieces of advice would be to first off start the magazine out of passion. Do your magazine about something you REALLY care about. If you don’t, you’ll be in big trouble and probably fold upon the first set of true obstacles you face. And believe me, week after week you’re on some sort of damage control mission and facing things you never thought you’d have to deal with — much of which stems from things beyond your control. On top of that, at least for us, this is not a cash cow. Be prepared to work for little to nothing. That’s where doing the magazine out of passion really comes into play. It’s true that if you love what you do, it doesn’t feel like work at all. Don’t get that twisted with it’s not work, because self-publishing is a ton of work. It just doesn’t FEEL like work when you love doing it. But if you are able to pay yourself after everything is all said and done, and you know it’s not a much as you are ‘worth’ or think you deserve, it’s all good, ’cause it’s a labor of love In the first place.

Secondly, put your blinders on! For reasons I can not explain, people will tell you it’s a bad idea and give you a 1,001 reasons why you shouldn’t start a magazine (even if they have no experience in this field at all). We personally had an overwhelming amount of support from friends, family and the skateboarding community when we started Focus. But even so, and much to my surprise, there were people very close to me who warned that this was a bad idea and tried to scare us from starting the magazine. There were a handful of haters too, but that’s when you just put your blinders on, stay focused to the mission at hand and make your dreams come true.

Being able to dedicate an entire magazine to covering guys coming up that you wouldn’t hear of for a couple years is an awesome feeling, and we’re proud to rep that.

Any cool plans for Focus Magazine this year?

We’ve always got some stuff up our sleeves and plans brewing in the background! Unfortunately every time (and against my better judgment) I spill the beans early on something it falls though and doesn’t pan out as planned. So, with that in mind, I’ll just say keep going to your local shop and picking up Focus and checking FocusSkateMag.com for updates.