I have always had an admiration for visual arts, specifically pertaining to drawing and illustration because it was a talent that I could never master, regardless of how hard I tried. Occasionally I’d dabble and think I had pulled off a masterpiece; Snapchat my friends a pic – their endless LOLs let me know it was just not for me. Enter Gyimah Gariba, a 22-year-old visual artist from Ghana based in Toronto, whose immense talent has gained him quite the following online. It’s led to him being involved in a number of impressive projects with a lot more to come in the future. I’d heard about him and his work through out the summer, so we caught up recently to learn more about his background, illustration, and what he has planned for the future. 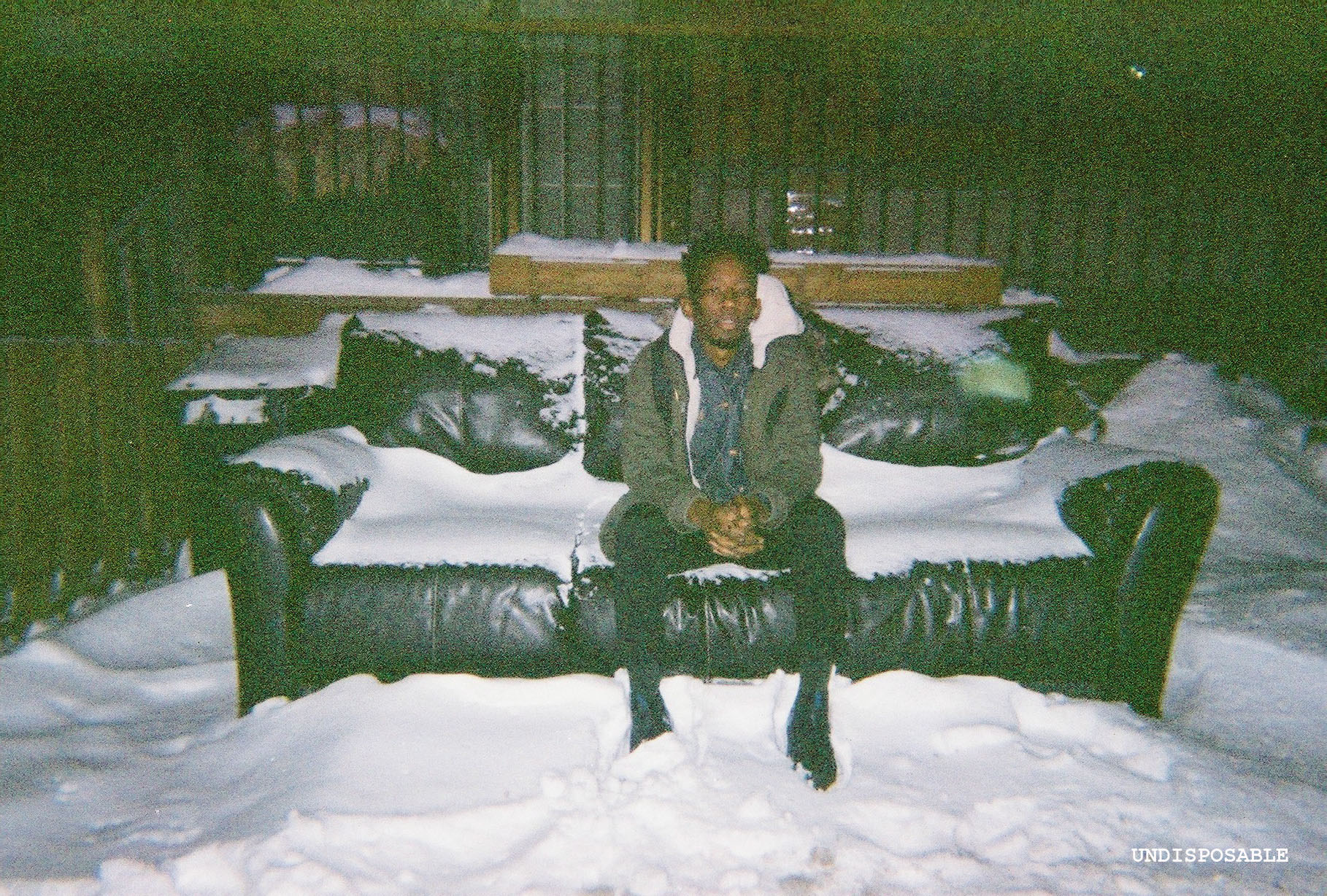 CHIEF BOSOMPRA: Let’s s start off by letting the people of the Internet know who you are.
GYIMAH GARIBA: Hey, my name’s Gyimah Gariba. I was born (’92) and raised in Accra, Ghana, West Africa and I’m a visual artist living and working in Toronto right now.

How old were you when you first began to draw?
I’ve been drawing for as long as I can remember. It’s always been a big part of my life. In all honesty, it probably started seriously the first time it generated a pleasant reaction in someone like a teacher or my parents. To answer I’d say I seriously started when I was about 5 or 6. My influences (being a ’90s kid) were Cartoon Network, [Powerpuff Girls], [Dexter’s Laboratory], Samurai Jack, Dragon Ball Z, Hey Arnold!, Swat Kats, Thundercats, Pokemon – the list literally goes on forever. 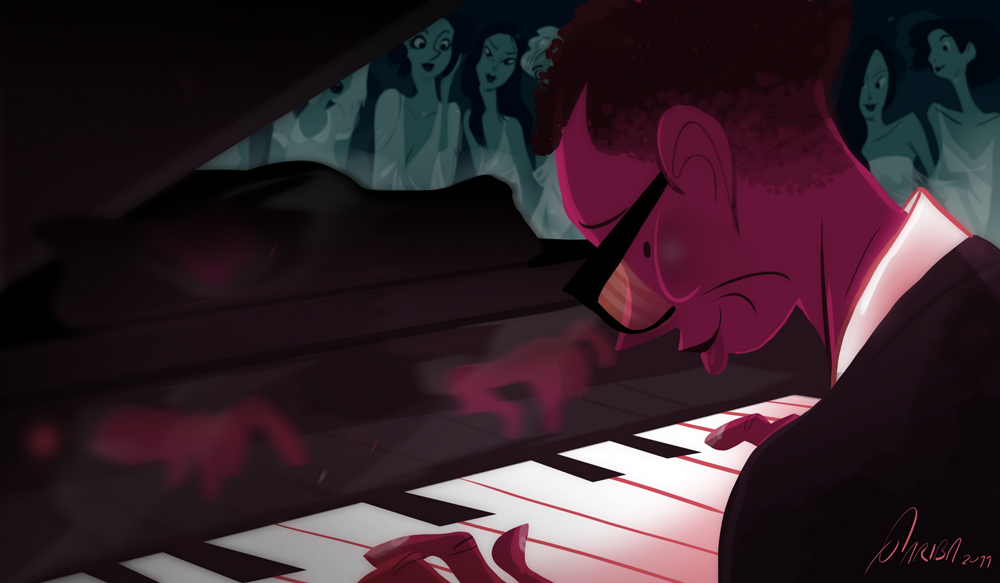 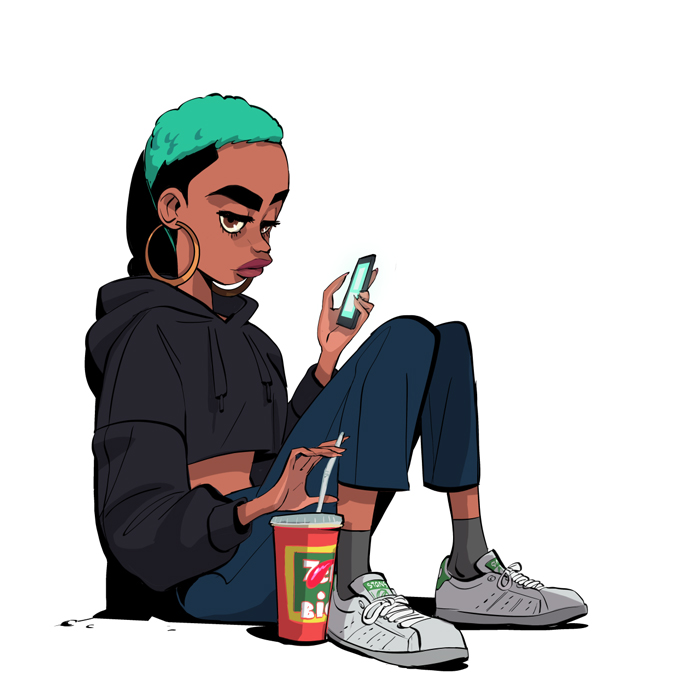 Something that’s good to explain, though, is that I’m not a full time Illustrator per se, so Illustration isn’t my day to day. I actually work 9-5 as a character and location designer for animation at Guru Studio. I draw all the time and Illustrate all the time, but I work in animation. So technically, my first professional piece of art work that was used and paid for, then mass produced, was my work interning as a character designer on Black Dynamite Season 1 in 2013 or so. That was big for me that they gave me that credit – got to work with some heroes of mine, and that, as a first professional acknowledgment was very important to me. Many after and before were too but that hit home. I high fived my 12-year-old self with that one. Shoutouts to the BD crew! 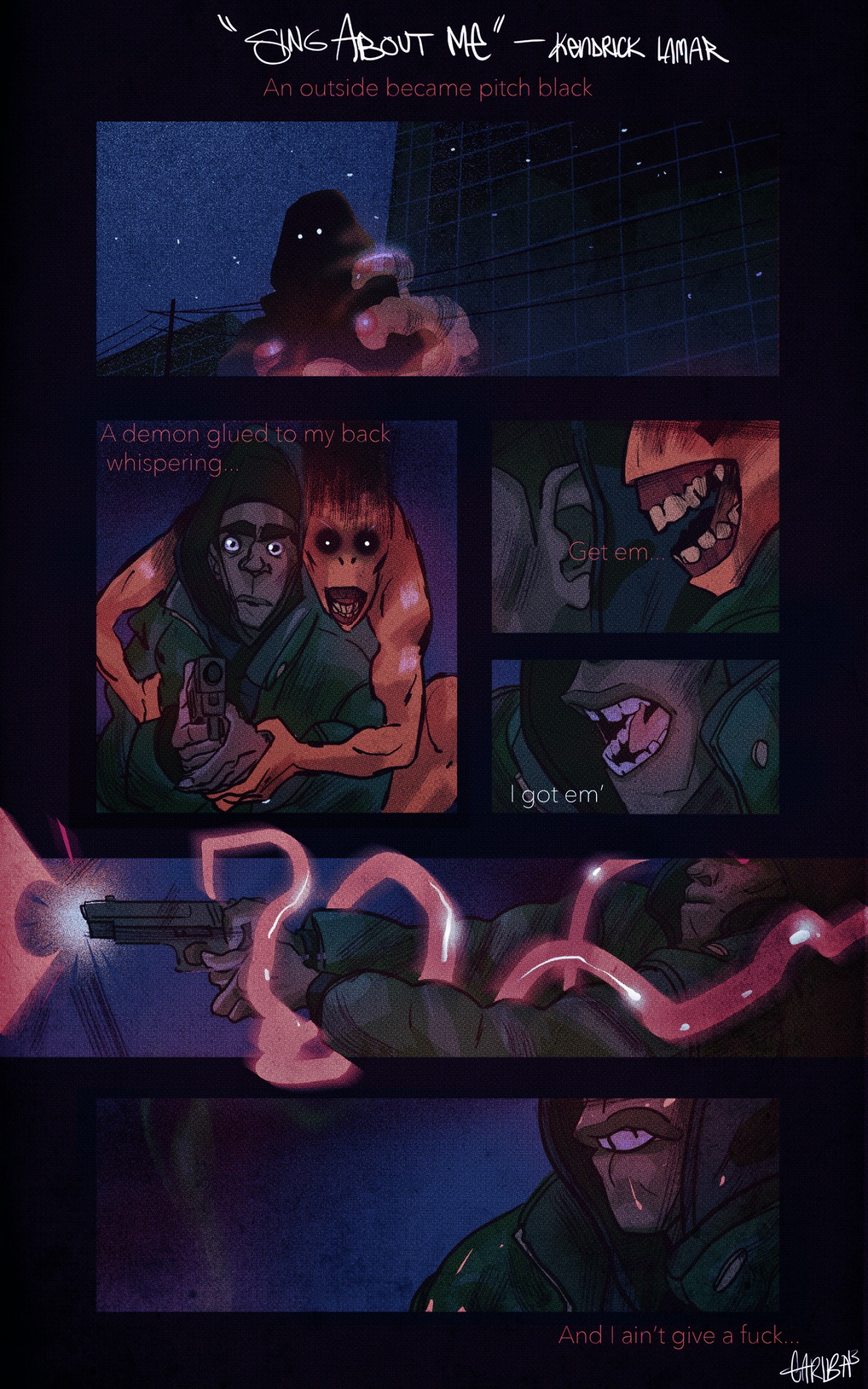 Your Ghanaian heritage is very prevalent in some of your work. What is it about Ghana that inspires you?
I’m trying consciously to make it so. I just think it’s important for people to tell different kinds of stories. I think representation and honest work is important as well. So to me, it would be a disservice for someone like myself, who grew up in such a rich and vibrant culture – and had the privilege to be immersed in its colours and livelihood and know it as much as I know myself – to turn around and tell North American stories about character types that have been cliche’d to death. It would be such a disservice.

“As an artist, I feel like your only job is honesty.”

I just figure I grew up on cartoons and images that depicted a certain type of hero that I could empathize with that didn’t look like me (Goku, Naruto). I think that now that I can actually do my little part and sneak in imagery that makes everyone feel more included and represented, it’ll give more kinds of kids people to look up. I’m just trying to make up new flavors to pick from. Think of it as this: If you liked Power Rangers, for example, and your favourite colour is turquoise, I wanna give you the turquoise ranger to look up to. 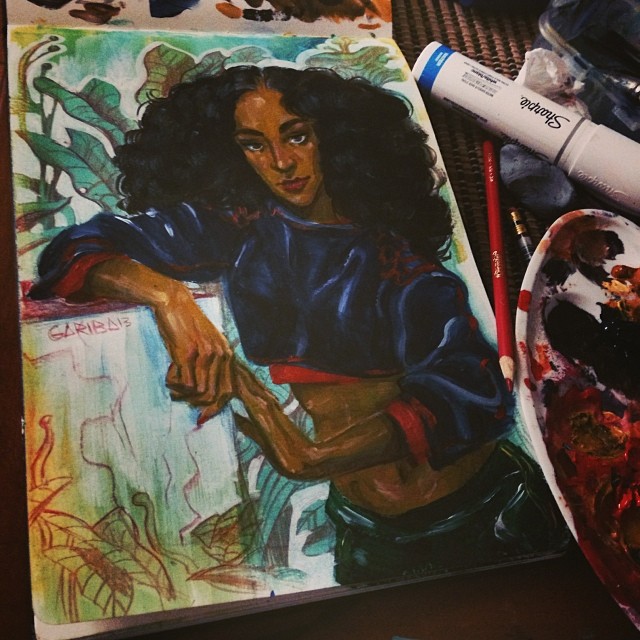 As an African illustrator, do you feel you are at an advantage or disadvantage in the professional realm?
My whole family was born either in Ghana or Lesotho (South Africa) except my older brother.

As for whether I’m in an advantage or disadvantage is hard to tell, because I’ve never been any other way or known anyone else’s struggle that well I guess. The good thing about the arts for the most part, is that a lot of it has to do with general appeal or the ideas behind the work; then after that, WHO made the work plays a part. Me being Ghanaian generates interest among Ghanaians, and me being black generates interest among my community, but to me, those are the same advantages as any other artist. It provides a leg to stand on when you’re addressing issues in your art that pertain to things that you have gone through. It makes me more honest, naturally. 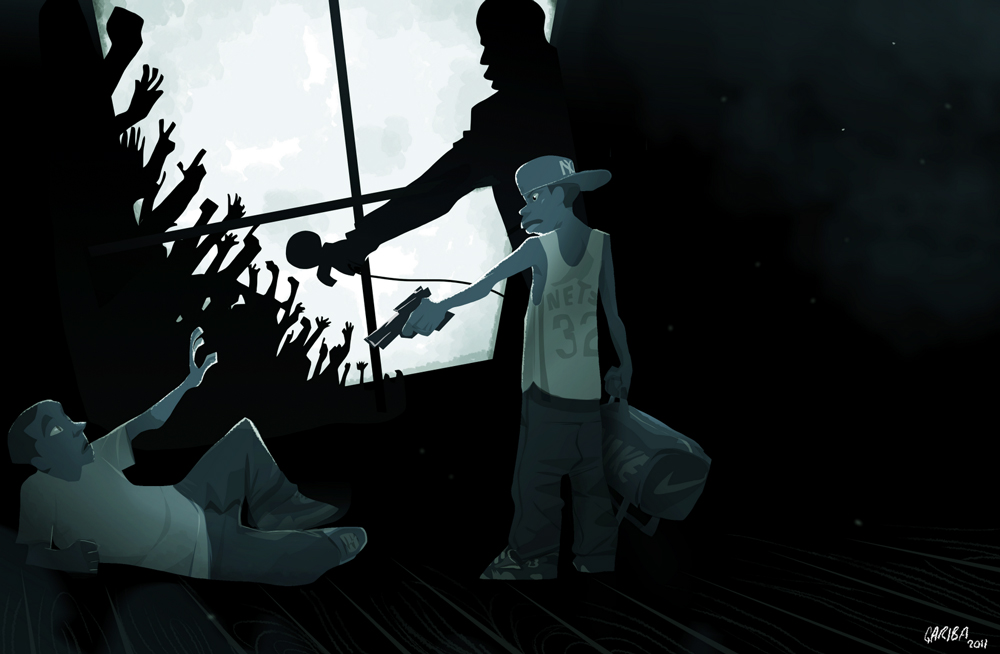 You’ve amassed quite the following, how did you first get recognized?
Through the Internet. Mostly through work I’ve done that’s either relevant to a time or through images I’ve created based around the music I listen to. I got a lot of following one summer because I made illustrations vaguely based of off the Watch the Throne album by Jay Z and Kanye West, then on another platform from getting a comment from Rihanna [laughs]. Those things are nice, but when they happen, you get a couple thousand new eyes on you. But I like to use that to tell different stories and not just keep pumping “fan-art” at people. 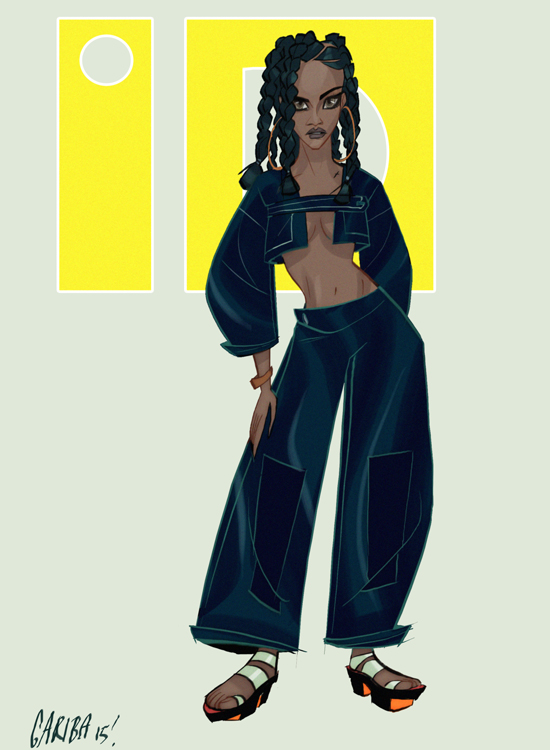 We are always quite interested in how creatives use the internet to propel their work. How did social media affect your brand?
Social media basically made it easier for people to follow my work, which can be a good or bad thing. It definitely creates for a larger audience, but sometimes I find it hard to just shut it off. It’s become so easy to pick from the same pool as everyone else because generally we’re all picking ideas from the same pot, the same news feed now. So consequently, the results are pretty similar. It also can affect presentation I find. As an artist I really hold presentation highly depending on what the project is, so it becomes hard when I post a random doodle then go back and realize I didn’t want you to see the first pass at this painting because it gives away a weaker idea I had before I finished the ACTUAL piece, which is so much stronger on its own. It’s cool to see the process, but sometimes I trip myself up. It’s like, would you sit and watch me practice doing backflips for 3 hours, or just watch 15 minutes of backflips once I’ve mastered them?

What are you currently working on?
I’m working on a few things at the moment, actually. I’m doing backgrounds on my friend Benjamin Anders Nickelodeon pilot, Jo Minkus!, which again, I’m excited for because it’s once of those things where you flashback to watching Nickelodeon, but now yours and your friends from college’s names are up on screen. I’m also working on a long term visual development project called Anansi based on Ghanaian stories which is a 3d short. Myself and Sy blake, a super talented 3D modeler, are working on the designs (that are always subject to change) right now and sharing as we go. I’m always working on an ongoing basis with a friend of mine, Freddy Carrasco – also another amazing illustrator and animator on rug designs, T-shirts, comics, short animations, and a series of cartoons and comics under the name FUNKFUZZ. And the rest of the stuff is just freelance for animation and one off projects that come along. 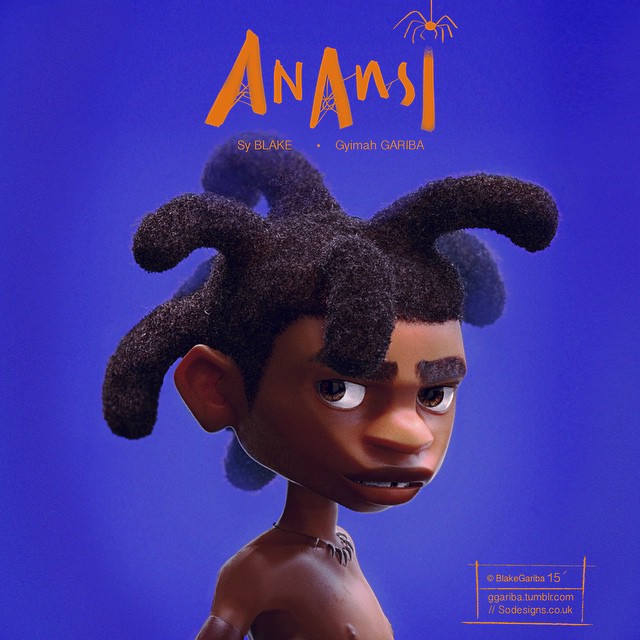 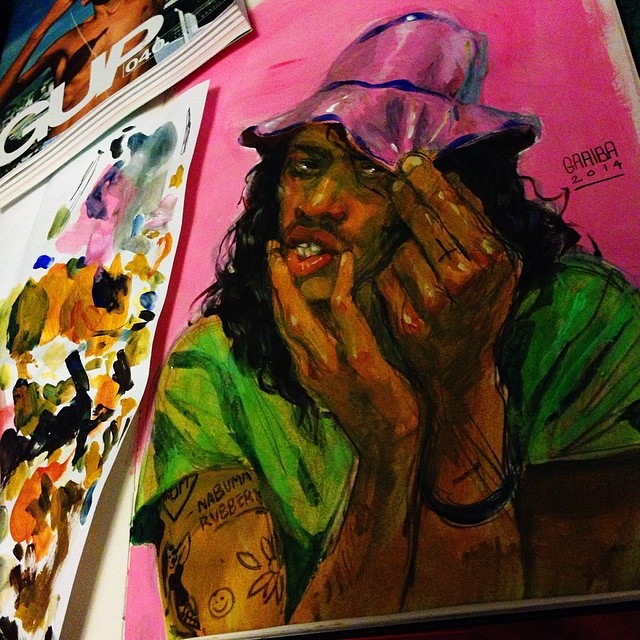 I’m at the beginning of all of these simultaneously, they keep changing. No one has a 100% grasp on any of it at any given time, but trying is worth it, always. Also just be yourself, because I feel like everything starts from the inside. You can’t be running around trying to be someone else, because as an artist, I feel like your only job is honesty. Just express honestly how you feel through your work, and obviously it’s going to disrupt and not everyone is going to like it, but at the very least it’s a true form of a record of your life. A worst nightmare to me would be for someone to look through my life’s work and get a misconception of who I was and what I stood for because I was too busy trying to be like someone who I wasn’t. It makes for confused work, and I feel like you can tell when something is dishonest in music, in art, in everything. Artist Alex Gardner's Blank-Faced Figures are Open to Your Interpretation

Zio
“The goal is to get the person to think at all, to simply be moved.” Alex Gardner speaks on his figurative art and its implications.