This is Jane, chiming in (per Bobby’s request) with opinions about music. Hello.

A few nights ago I attended theTijuana Panthersshow at the Bootleg Theater, and I have to say, it was pretty rowdy, and not just for a band of childhood friends who grew up going to church together. I mean, the Long Beach trio, made up of Chad Wachtel (guitarist), Phil Shaheen (drummer), and Dan Michcoff (bassist), erupted the venue, drawing around-the-corner lines and rockus stage-divers who got violently thrown out of the venue by 300 lbs security guards (using unnecessary force on slender white dudes 1/10 of their size). Also, not to date myself, or this article, but it was a school night, and I hate lines, and I stood outside for least 30 minutes before getting let inside of this show, and it didn’t bother me one bit. THAT’S HOW AWESOME THEY ARE.

Signed to LA-based Innovative Leisure (the good folks behind our favorite excuse for day-drinking,Lunch Beers), alongside The Hundreds blog vets Hanni El Khatib and Nick Waterhouse, they play surf-pop-power-tunes that go down smooth like a mango daiquiri on the beaches of Tahiti. Personally, when I listen to their music, I’m mentally transported into The Endless Summer or maybe it’s Point Break, and I’m riding the most perfect wave into the sunset, probably wearing this.Dan, Phil, and Chad, aka Tijuana Panthers, make music that epitomizes all the best stereotypes about California cool, and are set to release their new album, entitled Semi-Sweet, on May 28th. Just in time for summer, I have a feeling its degree of sweetness will be more than just semi.

If you’re a local, it is highly advised that you attend their show atThe Wellin Downtown LA on May 15th. Go forth for photos and post-show interview. 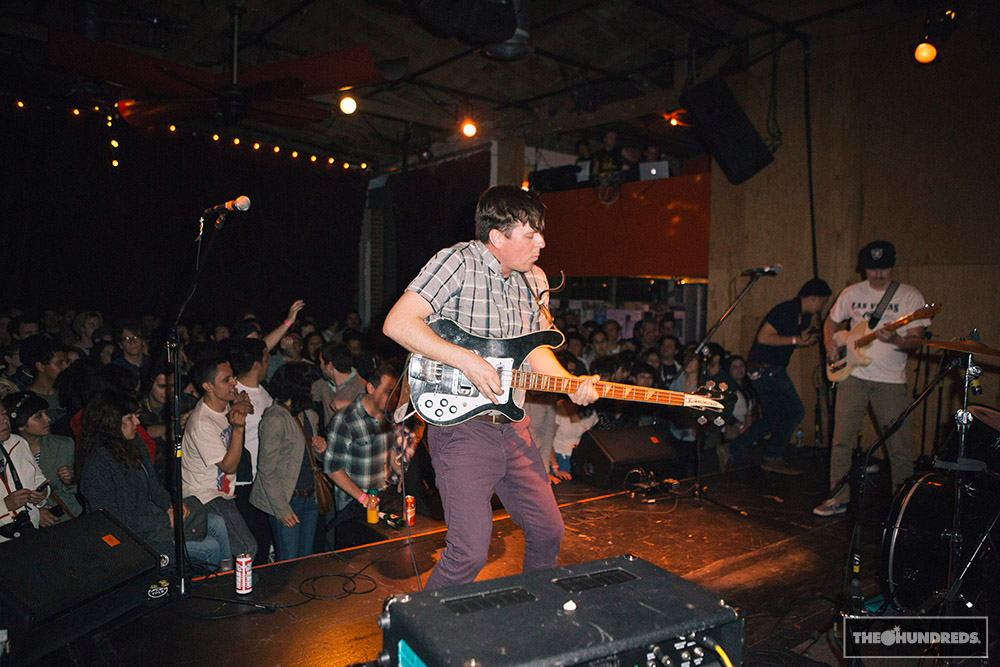 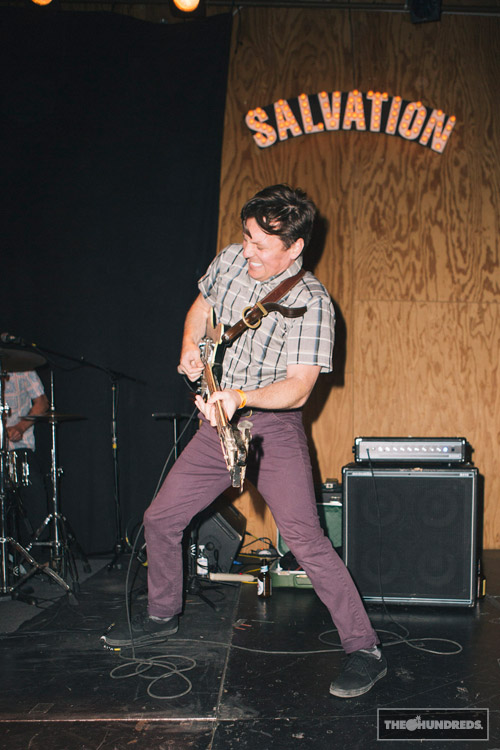 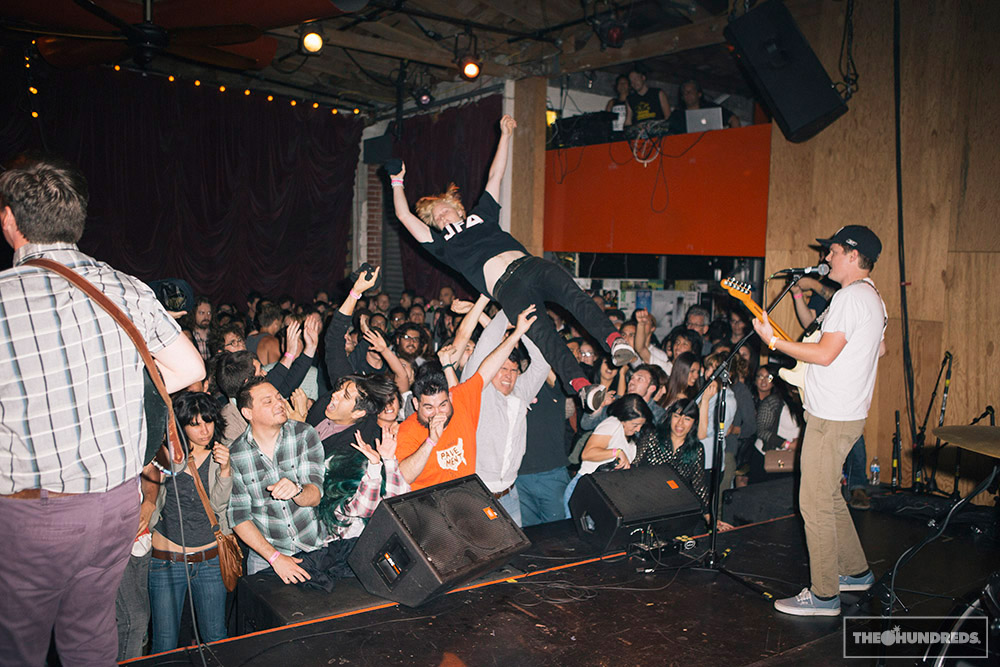 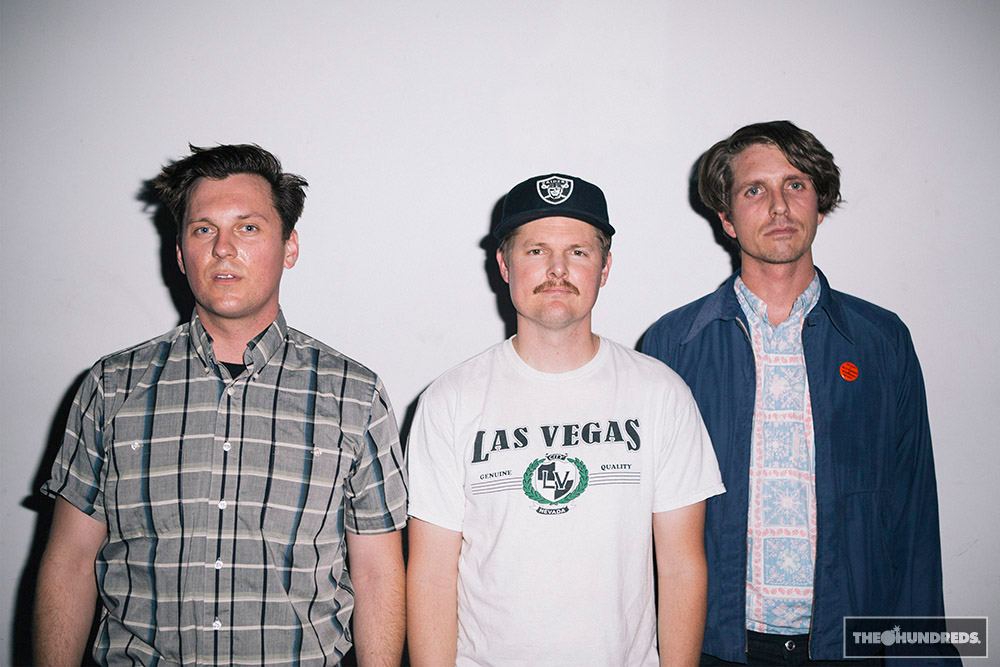 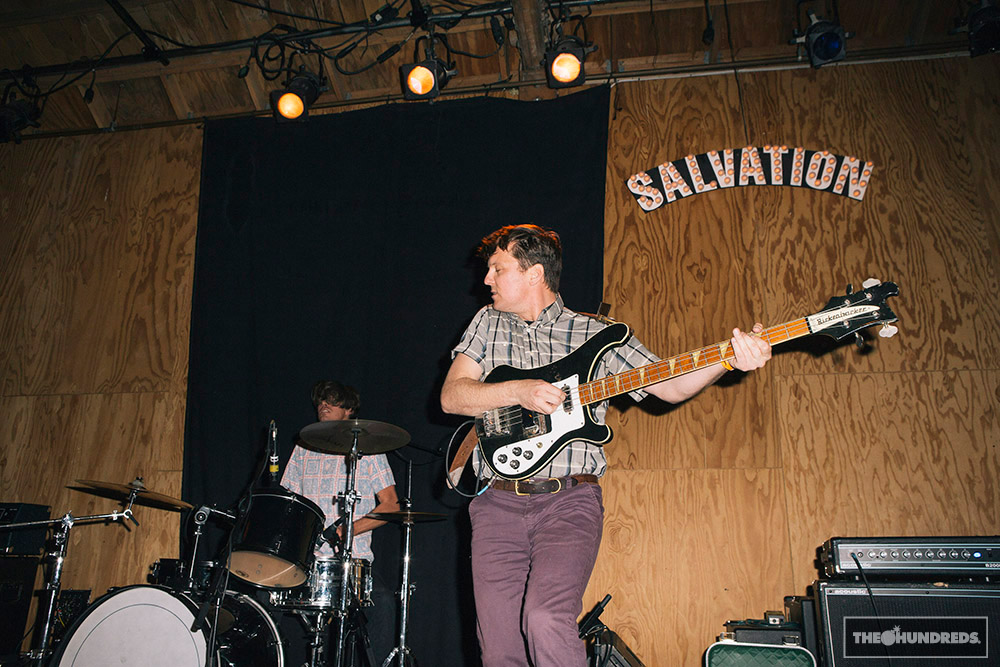 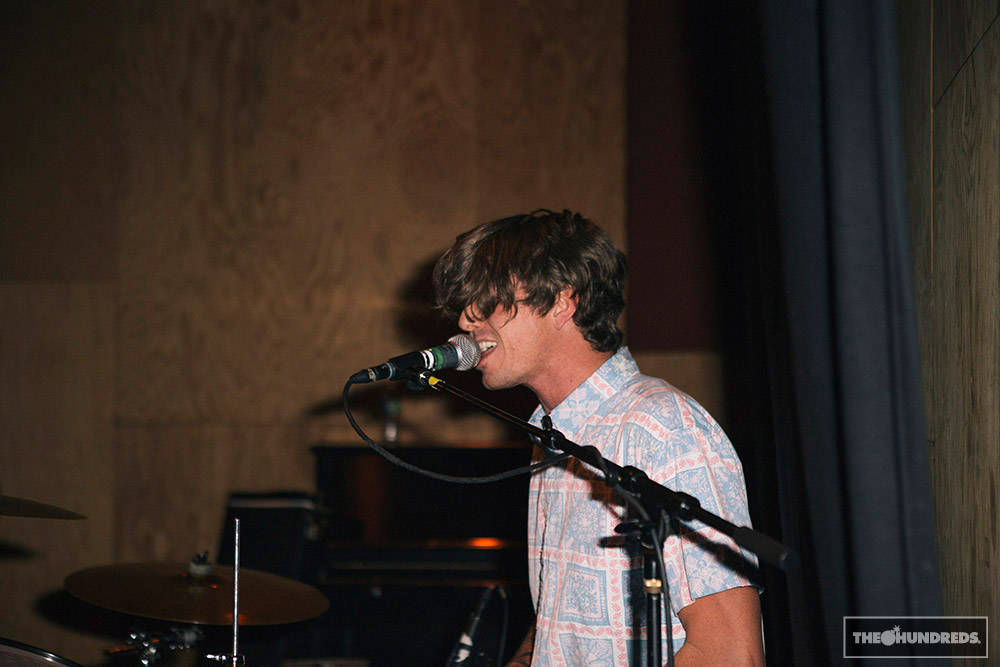 Have you played in Tijuana before?

No, we’ve been down to Mexico plenty of times to surf and all that, but since we’ve been a band, we haven’t. It’s a culture we admire heavily. My dad’s born and raised in Mexico, and we have a huge Hispanic culture in Southern California and Long Beach. It’s a big homage. We’ve been offered to play, but it hasn’t been the right thing yet.

Are you guys big surfers?

Growing up we were. We all grew up surfing together, but we don’t like to be those guys. We love the culture. This is Phil talking now, I’m better than a lot of the bands tonight. I don’t know how they surf, but I’m better than them. We love surfing and we’ve done it for a long time, but we’re not rippers. I let other people go in front of me, there’s no aggro-surfing. We’re all just mellow dudes. So to answer your question, yes.

You guys grew up going to Church together?

How has that carried over into what you guys do now?

Chad: For me, a lot. That’s how I developed my rhythm. I started playing guitar and the pastor said, “Hey, Chad, I want you to get up there and lead worship songs.” I was scared, but that helped develop me as a musician. I’m influenced by some Christian alternative music from the ’80s. Some of it’s really cool, like The 77s and The Lifesavers.

Chad: I’m fine with that, but we’re not, per say. Maybe I’ll start a side project…

Dan: We’re just doing our thing. If we’re Christian, we’re Christian. We don’t promote it as that. We don’t all have the same beliefs. I think we would broadly say we’re not a Christian band, in the sense that we’re not trying to actively get involved with those circles as a genre. As dudes, it’s a heavy spiritual path for us all, and I think the Christian path is a valid one for all of us.

I think that’s rad. How many people can play the Bootleg stage and say, “Yeah, we went to church together.”

Phil: I think a lot of people up there wouldn’t claim that, even if they did.

Dan: I have to say, I met the most special people in my life in Church and by special, I mean, the weirdest. I don’t mean they’re fucking nuts, I mean they’re nuts like they build, they create, they introduced me to music, they are the people who’ve inspired me throughout my life.

Phil: I think we all had to figure out what we were doing early on, so we had to mess around with stuff. That’s why a lot of us from Church picked up things and became artists.

Chad: Last thing, Phil had a joke. Let’s be clear, this is Phil’s joke, not mine.There are these girls we played with, they are cool girls, good musicians. And they were Jewish. And we started talking about that before the show, and Phil goes, “This is like a battle between the Christian and The Jews.” They didn’t think it was funny.

Phil: Ya, they’re okay. I like dogs. Chad likes cats.

Ok. I think I want to end with that. Let’s all go watch Bass Drum of Death.